There is no shortage of stories to tell about Milwaukee's Brumder Mansion, 3046 W. Wisconsin Ave. These days, the 1910 Arts & Crafts home on 31st and Wisconsin is a bed & breakfast with a theater. But there's a lot of history in the place, too.

There is no shortage of stories to tell about Milwaukee’s Brumder Mansion, 3046 W. Wisconsin Ave.

These days, the three-story red brick Arts & Crafts home on the corner of 31st and Wisconsin is a bed & breakfast with an operating theater in the basement hosting a variety of performances, often by Milwaukee Entertainment Group. 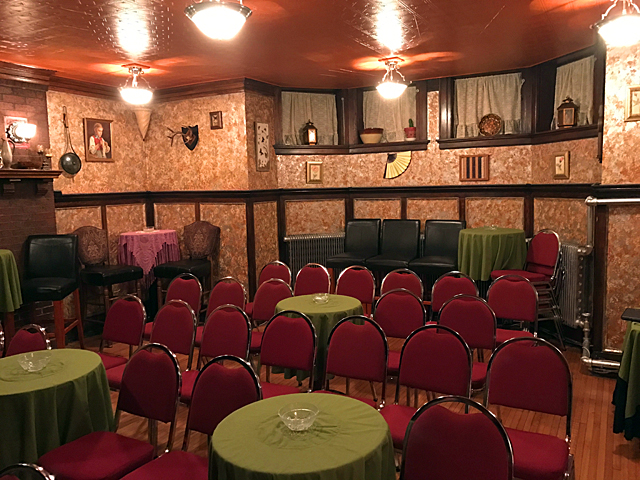 Was this theater a speakeasy? The evidence would seem to suggest so.

A lot of folks will also tell you there are some spirit residents of the place that German-language newspaper and printing magnate George Brumder built for his son George Jr., but during my stay there I encountered none of them and I’ll leave those tales for others to tell.

What I did find was a beautiful home tended with loving care by owners and staff who appreciate the gem they steward that is a great place either to stay overnight – you’d better hope Tom the innkeeper is on duty and cooking breakfast when you do, because, seriously ... – or to catch a small theater production. 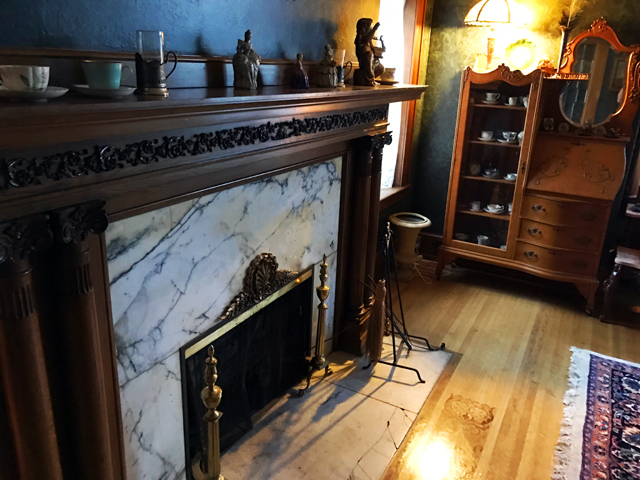 Brumder the elder tapped architect Herman P. Schnetzky – who a dozen or so years prior had designed the Brumder (now Germania Building) on 2nd and Wells Streets with his then-partner Eugene Liebert – to design a home for his son and daughter-in-law Thekla and their three children.

Brumder appears to have purchased the land from important West Side real estate man August Richter Jr., who bought up and developed large swaths of this part of town, including most, if not all, of what would become the Cold Spring Park neighborhood. 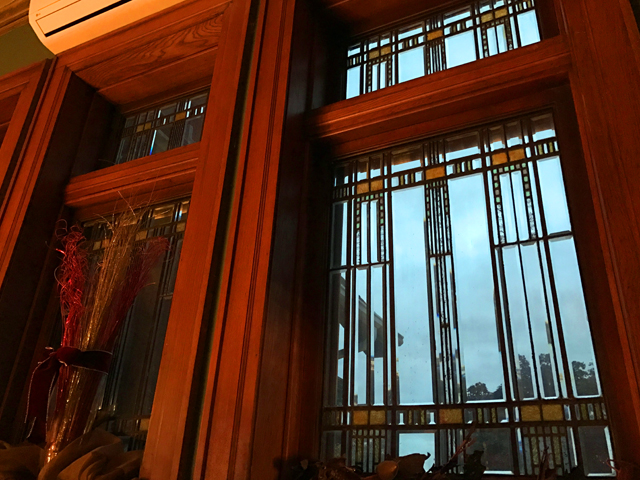 While the house was rising, the younger Brumder lived a block and a half south on 31st Street, between Clybourn and Michigan.

In May 1910, before the $25,000 home was completed, George Sr., died, so he never got to see the beautiful results: the stained and leaded glass windows, the dark woodwork, the gorgeous George Mann Niedecken floral mosaic around the dining room fireplace, executed in Tiffany & Co. tile. 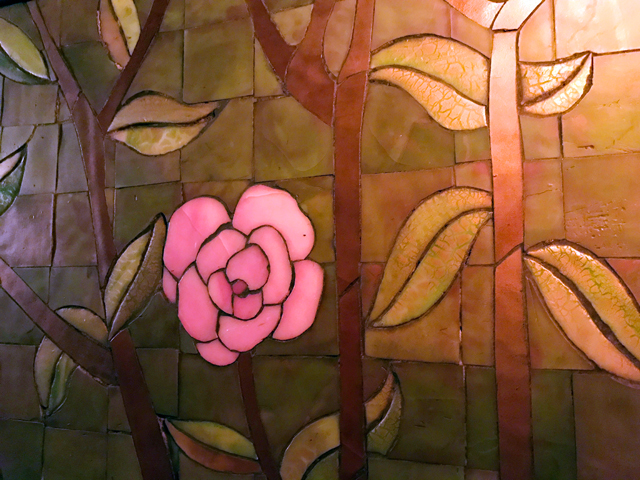 But his offspring did likely enjoy it, because they stayed until 1926, when they moved house, apparently to the home of Brumder’s parents on 7th Street, and later, to Edgewood Avenue, not far from the 1911 Tudor-style home his brother William purchased at 3270 N. Marietta Ave. in 1927. That home is now owned by UWM.

Miller, in 1927, was better known as Mrs. Sam Pick and lived in the home with her husband and their son Robert.

Sam was a nightclub owner, whose place out on 128th and Bluemound was called Club Madrid (and, it seems, for a while, the Suburban Inn). And Pick was rumored to be an affliate of no less than Chicago mobster of legend, Al Capone, who some say had a home out in Brookfield, on a street now called Capone Court. 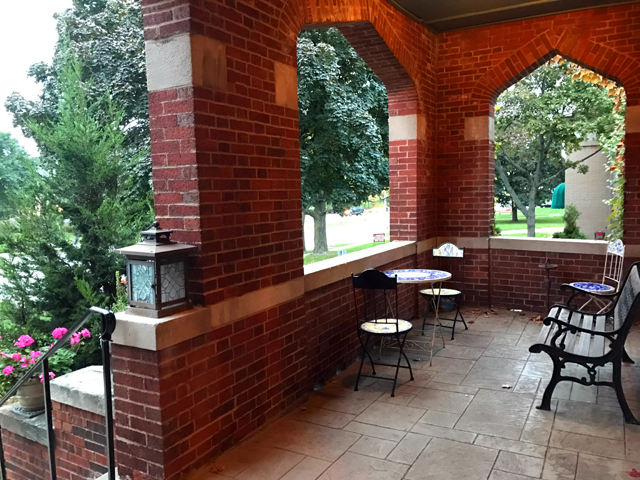 Capone supposedly owned a stake in a dog racing track in Brookfield and some say he tapped Pick to open Club Madrid (the stone gates of which still stand on the site) as an outlet for Capone’s bootleg booze. An interesting side note is that "Gone With the Wind" actress Hattie McDaniel worked as a waitress and bathroom attendant at the club in 1929. When Pick discovered she could sing he put her up on stage.

The theory is that the Brumder Mansion was another such illicit outlet for Capone’s product, thanks to the rec room that Brumder had built in his basement, which made a perfect speakeasy, and which today is home to the theater.

According to an FBI file shared by author Gavin Schmitt, "The Club Madrid had been a controversial gambling spot from the 1930s through the 1950s, and was a hangout for actor Spencer Tracy, but was not a Mafia-run business."

"Pick was slick in his pinstripe suits, welcoming customers as if he were ‘everybody’s favorite uncle,’ (historian Stephen) Hauser said," according to an article in Brookfield NOW. "When some customers stumbled upstairs for a round of gambling and assorted other vices, nobody objected." 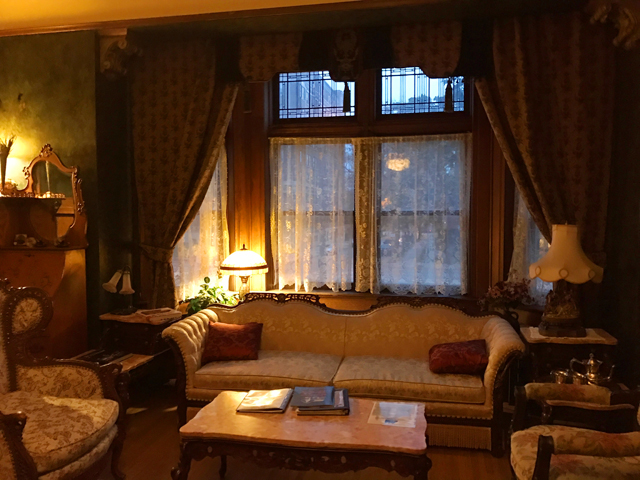 So, was Capone involved with Pick or not?

That’s not something I can answer conclusively based on what I’ve found, but the "assorted other vices" makes one wonder about the four single women "roomers" – ages 19, 22, 32 and 41 – who were living with the Picks at the old Brumder place in 1930.

Prohibition was repealed in 1933, but the Picks were already gone from the Brumder by then. City directories for 1932 and ‘33 list the house as vacant, before, in the following year, a trio of lawyers moved their offices in and stayed for a few years.

By 1937, Hellmut C. Wegener was renting furnished rooms in the Brumder, a practice he maintained for a decade, until the home was purchased – along with a number of other adjacent properties – by Our Savior’s Lutheran Church, which was located on the corner of 9th and Scott on the South Side. 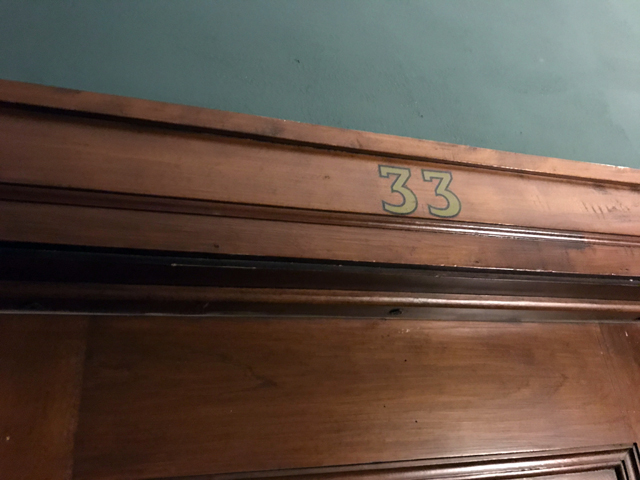 Room numbers: a remnant of the Wegener rooming house days?

The site of the Wehr mansion, two lots east, was to be the home of a huge new church that would accommodate a postwar boom at Our Savior's.

"West Wisconsin was a very desirable location in 1946 not only because it was central and easily accessible via the city's transportation system, but also because it was in a vert prestigious neighborhood," reads a church history. 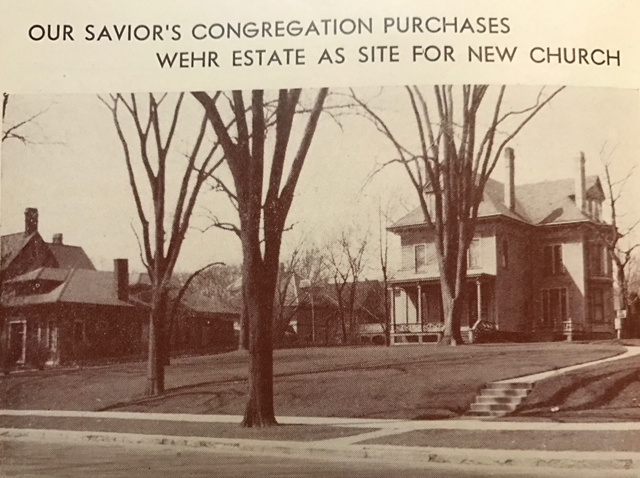 The Brumder Mansion can be seen at far left. (PHOTO: Courtesy of Our Savior's Lutheran Church)

"At this time the area was still largely residential, and many of the old mansions and estates were still occupied by the leading families in Milwaukee society. 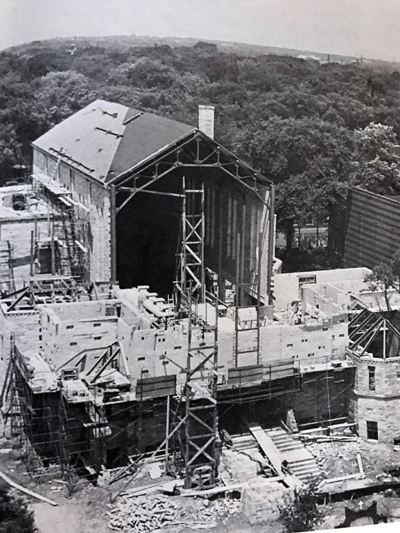 "The geographic move from the ethnic, working class neighborhood on the south side to the new location on Wisconsin Avenue was definitely a social move as well. From its new building in the heart of Milwaukee, Our Savior's would be able to reach out to people throughout the city and could well be considered the new Lutheran Church in Milwaukee."

The church’s pastors, Rev. A. Reuben Gornitzka and Rev. Edward A. Gilberston moved in in 1947 and '48, respectively, and so began a long period of the home serving as an adjunct to the church, which would move its entire congregation two doors down by the dawn of the 1950s, when architect Hugh Haeuser built a neogothic revival church at 3022 W. Wisconsin Ave. A mansion on that site was razed to make room. 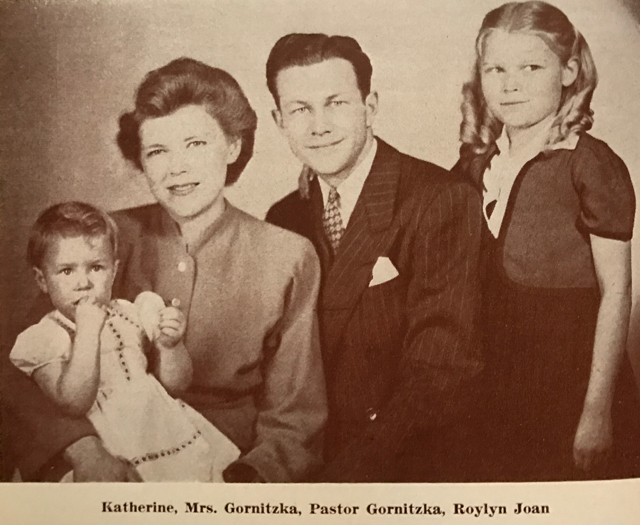 By then, Sam and Laura split and she was back to being Laura Miller and running a tavern in the Town of Milwaukee, while Sam moved out closer to Club Madrid, which burned in 1953 after a stick of dynamite was thrown inside the door. 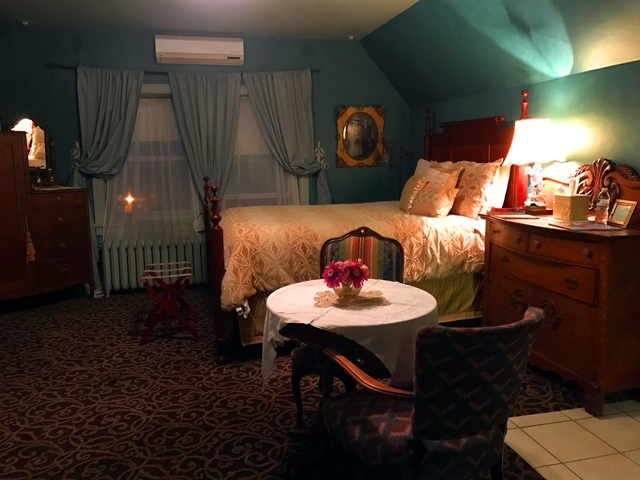 Above and below: two views of the Marion Suite on the third floor.

The Brumder, in the meantime, was used for offices, as a pastor’s residence, as meeting rooms, as a chapel, as a day care, as office space and youth center (the Brumder web site notes that "a psychedelic youth chapel was created on the second floor, complete with recreated stained windows and shag rug") for Next Door Foundation and more until the church finally sold the property, in 1997, to Carol and Robert Hirschi, who restored it to its original elegance and opened a bed & breakfast there and created the theater. 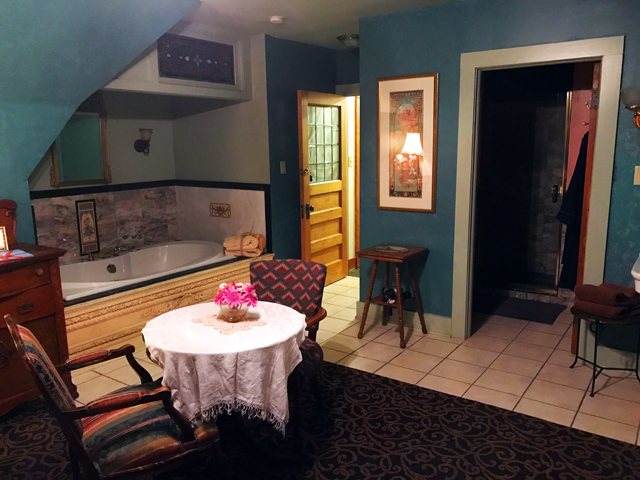 The current owners – Tom and Julie Carr – stayed at the B&B in 2007 as visitors from California and, upon learning of the Hirschi’s desire to sell, moved to Milwaukee and bought the Brumder in January 2008.

These days, staying at the Brumder is much like visiting the Carr’s home (which is actually next door). They’re present and welcoming and eager to chat. The decor recreates the era of the home’s construction and is warm and evocative, with framed historical portraits on the walls and, my favorite touch: travel guides and booklets from across the globe scattered here and there. 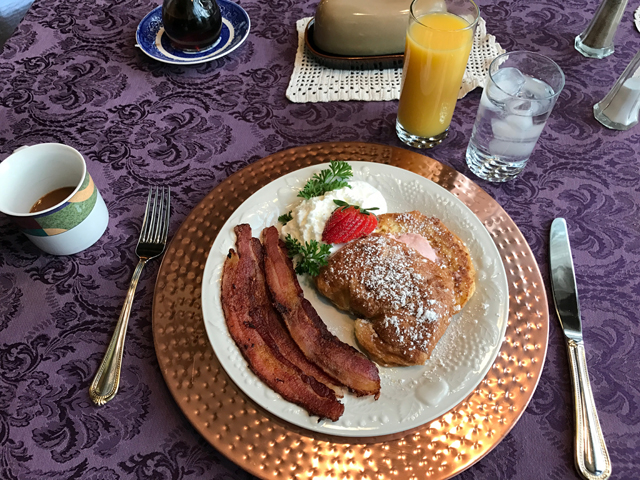 The rooms are homey and charming, but with modern touches. I stayed in the Marion Suite on the third floor, which had a jacuzzi and a walk-in shower.

There’s wine and beer and tea – and cookies – for guests and, as I hinted earlier, the breakfast is pretty great. In fact, when I left the Brumder I went to a food festival and a nationally recognized restaurant and I think the breakfast I had at the B&B was the culinary highlight of the day.