Could this horned headwear be the new cheesehead?

Wisconsin is no stranger to bizarre headwear at sporting events. But thanks to Milwaukee-made Buck Head hats, sporting a pair of horns at a Bucks game is no longer just for Bango.

Wisconsin is no stranger to bizarre headwear. After all, is it even a Green Bay Packers game if you don’t see at least one famed foam cheesehead in the stands, tailgating in the parking lot or used as a predictable crowd shot on FOX coming back from commercials?

There’s a new silly chapeau, however, beginning to mark its territory in the Wisconsin sports scene: seemingly regular hats featuring a brightly colored pair of antlers proudly protruding from the crown.

Indeed, thanks to Milwaukee-made Buck Head hats, sporting a pair of horns at a Bucks game is no longer just for Bango.

This idea of fans sprouting fake antlers sprouted from the minds of friends and local craftsmen Jesse Meyer and Marc Ownley – though the inspiration came less from the Bucks on the court and more from the actual animals out in the wild. 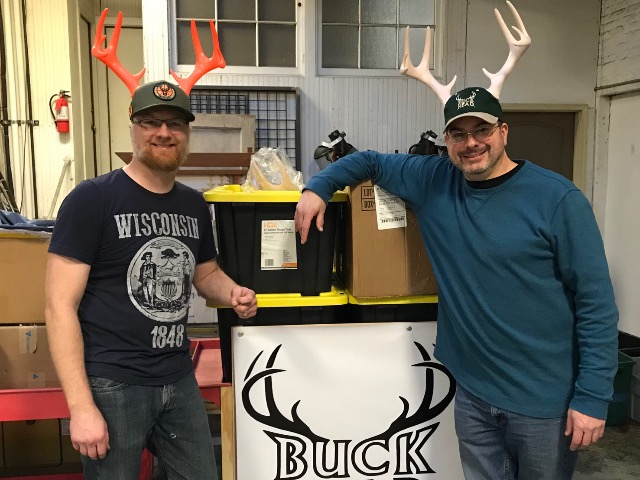 "I was listening to NPR late last winter, and they were talking about chronic wasting disease in the deer population and that deer hunting in Wisconsin is this huge industry that no one really acknowledges in the broader public," said Meyer, a sculptor.

"A guy was advocating for sending state money to broaden public attention to this issue, wondering why nothing was happening with it while we’ll invest millions of dollars in sporting venues that are also iconic Wisconsin industries. And in that moment, I envisioned the two things together: deer culture and the Packers or the Bucks."

Fueled by the image of thousands of fans wearing antlers at a sporting event, Meyer and Ownley – a welding educator and inspector with more than 20 years of manufacturing experience – went to work on creating a Buck Head: not a hat itself but a specially made bracket that fits under any cap. Two small screws then slide through the crown’s vents to firmly attach the two antlers. 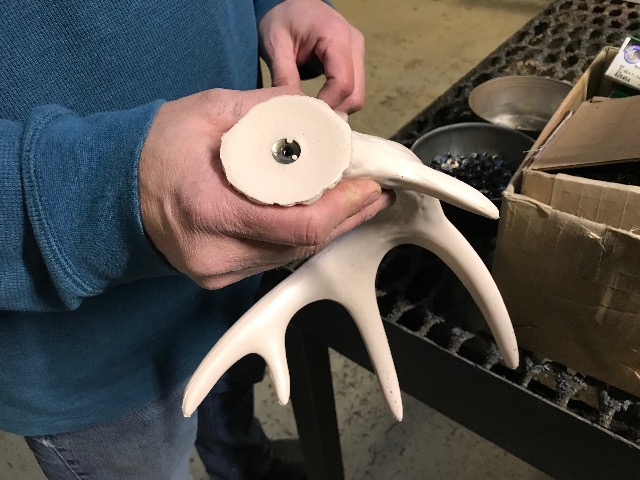 It took Meyer a few weeks to sculpt the original Buck Head prototype horns ("If I had better clay, it wouldn’t have taken that long," he joked) and the prototype molds. The goal was to get the hats out into the world by the Wisconsin State Fair – and therefore before the Packers and Bucks seasons – but as Meyer noted, "everything takes a little longer than you’d like it to," so the first Buck Head hat came together in late August.

Unfortunately, the antlers were softer, floppier and bouncier than preferred, so the two reworked the idea with a firmer foam. Finally, about eight to nine months from the idea’s origin, the Buck Head was ready to head out into nature.

"We went to some of the art festivals and out in public. During one of the first preseason games, we went out on Water Street to go through the bars and wear these things on our heads and see how people reacted," Meyer said. "People reacted great. They were like, ‘Where did you get those?!’ When we told them we were making them, they were like, ‘No way!’ So everything was looking really good." 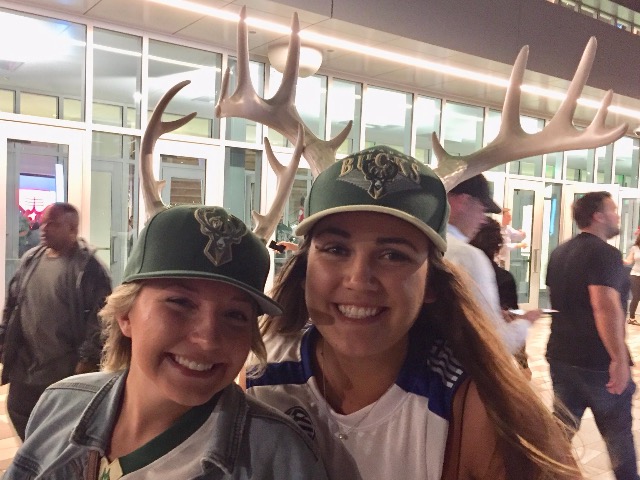 While the Buck Head hats were now out in public – available to purchase online at their website as well as at its partner store, Permanent Baggage, at 914 E. Hamilton St. – it was time to put them in front of the most popular antlers in the state: the Milwaukee Bucks. Meyer and Ownley teamed up with his friends at Flux Design, partners with the team on the new arena, to put some of their products in the head brass’s eyeline, as well as offered a gold-painted pair as a gift to Bucks president Peter Feigin.

The present apparently worked, as Feigin was seen rocking the antlers to introduce the first official day of the entertainment block and Fiserv Forum’s first regular season game in October. Meyer remembers the set even made its way on the head of NBA great Kareem Abdul-Jabbar – a high point, quite literally, for the new fan gear. 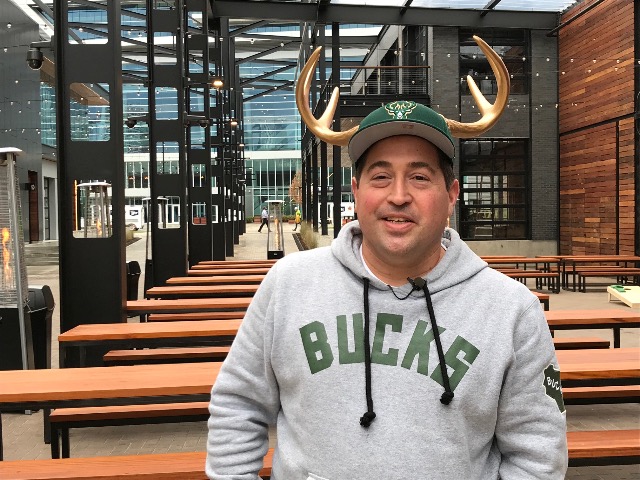 "That was the first time we really got to see them not on our people, happening a little more organically," he noted.

The Buck Head’s time in the spotlight would only continue to grow from there, eventually making a partnership with the Bucks official and scoring its way into elite company inside Fiserv Forum’s bustling pro shop. 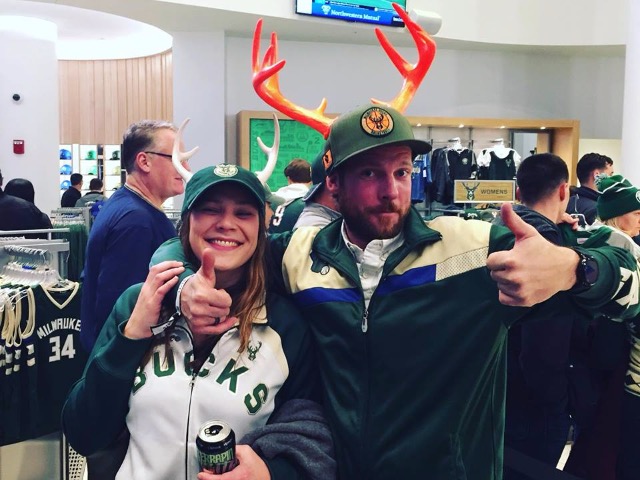 "Certainly when I met with Jesse and Marc, they had a lot of passion, and we could appreciate that they were local entrepreneurs," said Michael Belot, senior vice president of Bucks ventures and development. "We thought it was something that was unique and different for our fans to express how much they love the Milwaukee Bucks. I see them around the arena, and I think they’re a great talking piece and a great Instagram/Facebook/social media moment."

In just their few months selling inside Fiserv Forum and out, Meyer and Ownley have certainly noticed their "herd" of Buck Head hat heads growing.

"We can go onto social media and see people posting pictures and videos of them walking around the arena or in the stands," Ownley said. "That’s a pretty cool feeling; we owe (the Bucks) a lot." 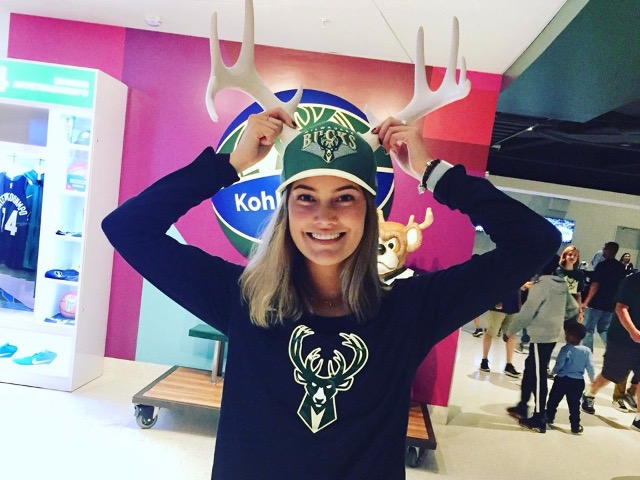 "The hunting community has taken very well to it," he added. "Every time we go someplace up north, the hunters just eat them up right away. That’s kind of the cool fact behind these: They can be used for many different variations."

Some of those future variations, according to Meyer, could include different colors, such as Buck Heads hewed for Christmas or for the Wisconsin Badgers. He also noted there are certainly hunting communities outside Wisconsin with teams of their own they may want to accessorize on antlers – though, when it comes to production, their focus has stayed in-state as much as possible.

Right now, however, all of those are just ideas for the fledgling fan apparel. One thing is certain, though: Wisconsin sports fans’ noggins are going to have to make room for a little venison to go with their cheeseheads from now on.

"The cheesehead has done a wonderful thing, and I think it will continue to," Meyer said. "If we can add to it, that’d be awesome. It’s just another way to express our fan base and our little heritage here."

A love for data and a love for service: Victor Amaya's journey

How one couple balances their marriage and two businesses