20 questions for Giannis and the upcoming Bucks season

The NBA season is upon us. Here are all the quick-hitting questions - from the important queries to the less important ones - to ponder as Milwaukee kicks off its 2019-20 regular season revenge tour.

The NBA season is upon us. Here are all the quick-hitting questions to ponder as Milwaukee kicks off its 2019-20 regular season revenge tour.

2. Will anyone compete with Milwaukee and Philadelphia atop the East?

Unlikely. Boston is the most logical candidate with its cast of perimeter talent, particularly if Gordon Hayward can find himself now that he is 24 months removed from his devastating injury. The Nets signed Celtics castoff Kyrie Irving to lead its group of youngsters, and though Caris LeVert, Spencer Dinwiddie, Taurean Prince and Jarrett Allen are nice core pieces, Brooklyn is still a healthy Kevin Durant away from cracking the East’s upper echelon.

The rest of the conference is a bit unpredictable. Does Miami make a win-now trade to partner another veteran All-Star with Jimmy Butler? Will Toronto sell off its aging pieces or take a victory lap season with its championship squad (minus Kawhi Leonard)? How long will Indiana’s Victor Oladipo remained sidelined, and what form will he be in when he returns? Can Orlando’s youth outlast Detroit’s vets for the final playoff spot? 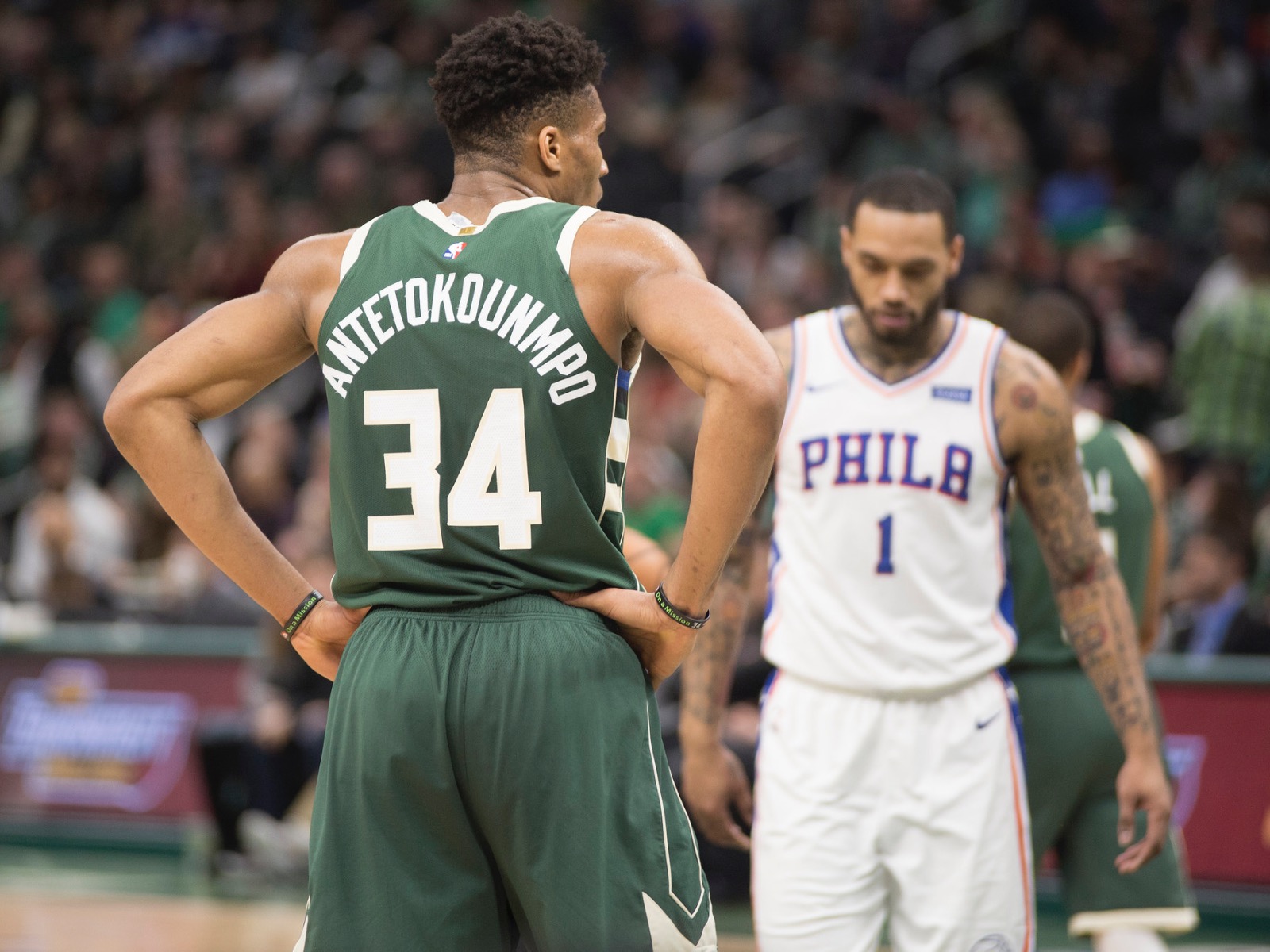 On paper, not particularly well. But on the court, it could be a different story.

Philly certainly has the talent advantage, and with a jumbo starting lineup that features four players who stand at least 6-foot-9, the Sixers may be able to pack the paint against Giannis Antetokounmpo’s drives. Offensively, though, the Sixers have a lot of question marks – namely, can anyone shoot at all? Milwaukee will have the best player on the floor against Philadelphia and has a superior coach who has instilled a system that puts his players in the best position to succeed. The same cannot be said for Philly right now. The Sixers might find that on-court cohesion by the Eastern Conference Finals, and they likely have the higher ceiling, but there is much less variance in betting on the Bucks.

The regular season is all about combining talent and continuity. Denver sports the right mix. The Nuggets won 54 games last year despite missing key perimeter players, and their two young stars – Nikola Jokic (averaged 20-11-7 at age 23) and Jamal Murray (averaged 18-4-5 at age 21) – are prime candidates to make another leap. This team goes 11-deep, which sets them up well to survive any non-Jokic injury or make a trade for a splashier piece during the season.

Elsewhere in the West, the Clippers are stupid talented on paper but will be without Paul George for the start of the season and will likely use the Kawhi load management strategy that worked so well for Toronto a year ago. The Lakers present an equally fearsome duo, but without the same roster depth, a two-week injury to either LeBron James in year 17 or the notoriously nicked up Anthony Davis will set them back in the race for the top seed. Golden State is incredibly thin beyond their top three. I remain wary of the James Harden-Russell Westbrook pairing in Houston, especially defensively.

7. Okay, back to the Bucks: What is Giannis’ path to a second-straight MVP award?

Giannis said it himself: He has only hit "60 percent" of his potential. Now, he is probably closer to 85-90 percent of his fully actualized hoops self – if a 28-13-6 MVP campaign is only 60 percent of his capabilities, than the rest of the league is officially toast – but that does still leave room for him to make another mini-leap.

No player has made year-over-year strides quite like Giannis; it seems foolish to bet against another jump as he enters his age-25 season. The easiest path to improvement is from beyond the arc, where Antetokounmpo shot just 26 percent last season. However, that mark ticked up towards 33 percent after Christmas and remained steady throughout the postseason. (He was also 4-11 from deep in three preseason games.) If he can hover around that 33-35 percent mark from three, his per-game averages will climb, he will create cleaner driving lanes for himself and he’ll make life even easier for his teammates.

9. Any other awards possibilities for the Bucks?

No. It was a Bucks awards frenzy this past June, as Giannis grabbed the MVP, Mike Budenholzer won Coach of the Year and Jon Horst took Executive of the Year. It’s nearly impossible to repeat in the COY and EOY awards – Atlanta executive Stan Kasten is the only man to ever to do it (1985-87) – as they are largely narrative-based honors.

Milwaukee doesn’t have an obvious candidate for the Sixth Man Award (George Hill?) or Most Improved (DJ Wilson, Donte DiVincenzo?), meaning MVP might be the Bucks’ sole path to the awards show in June. 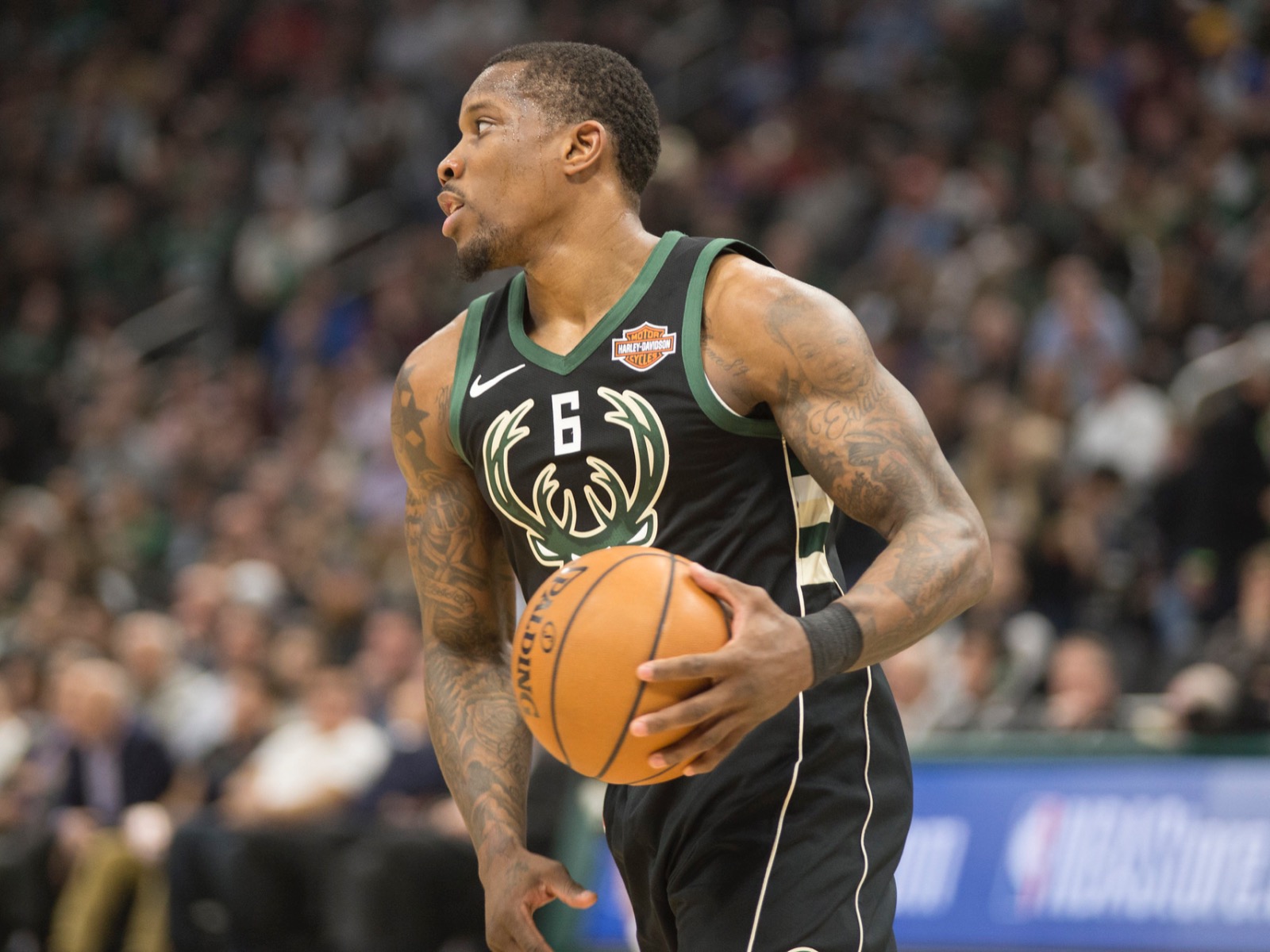 Despite missing time in the preseason with cracked cartilage in his rib cage, Bledsoe will be ready to go on Thursday night in Houston.

12. Does Khris Middleton have another gear?

It might be too much to ask for him to make one last leap, as he is already an incredibly talented player. But as he hits the prime of his career at age 28 and is now more comfortable in the Budenholzer system, this would be the year for a slight improvement. If Middleton can make the climb from borderline All-Star in the weak Eastern Conference to solidly in the All-Star class, the Bucks will be able to go head to head with some of the other talented pairings in the league.

Middleton understandably wore down in the Conference Finals a year ago as he battled Leonard. In Games 3, 5 and 6 against Toronto, which the Bucks all lost by exactly six points, Middleton averaged less than 10 ppg on 26 percent shooting. He had been lights out through his first 28 career postseason games (19 ppg on 46 percent shooting), so that could just be a blip on the radar against a really good team, but the Bucks are going to need more from Middleton when the season is on the line in 2019-20. 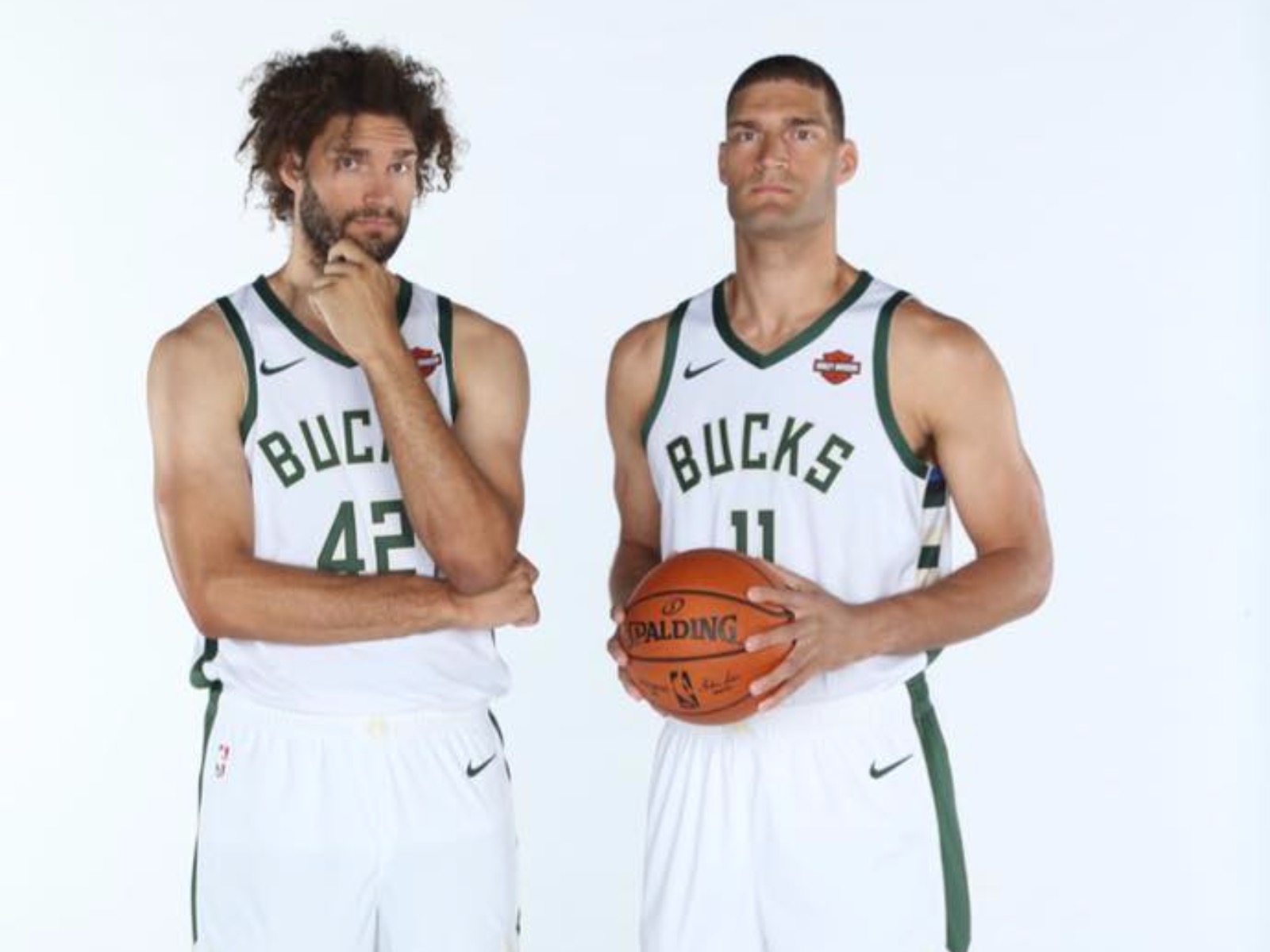 13. Which pair of brothers will share more minutes on the floor: Antetokounmpos or the Lopezs?

The Antetokounbros. Robin is still a superior player to Thanasis, but it is hard to see Budenholzer suppressing his coveted spacing by playing two centers at the same time.

14. How will Milwaukee replace Malcolm Brogdon?

With whomever has the hot hand that night. Matthews will get the first crack at the starting job; he started all four games he played in during the preseason, and though he did not shoot particularly well from deep (3-17), his track record of marksmanship should fit well in Milwaukee. Matthews – a Madison native, the 2005 Mr. Basketball in Wisconsin and a four-year star at Marquette from 2005 to 2009 – has nailed between 36 percent and 41 percent of his threes every year of his career. Despite an Achilles injury in March 2015, Matthews still averaged nearly 13 ppg over his past four seasons and has remained surprisingly durable.

But if Matthews fails to get the job done, Horst has given Budenholzer plenty of pieces to test drive at shooting guard. Fan favorite Pat Connaughton is not as reliable of a perimeter threat as Matthews, though his energy, athleticism and ability to play off Giannis are all nice assets off the bench. Sterling Brown provides defensive toughness and flexibility on the wing, and has proven capable of hitting the open three throughout his first two seasons. Kyle Korver remains one of the game’s elite three-point options, and though his defense has certainly slipped at age 38, he can still spread the defense and nail threes. (He went 8-10 from deep in the preseason.)

Korver could also find a newfound spark now that he is reunited with Budenholzer, his old Atlanta coach who helped Korver make his only All-Star appearance in 2015. And don’t forget 2018 first rounder Donte DiVincenzo, who missed most of his rookie campaign with a left heel injury but has a lot of Connaughton in his game – surprising bounce with a streaky three-point shot.

Budenholzer may also trot out a Bledsoe-George Hill backcourt from time to time, which was a look we saw last year in the postseason before Brogdon returned from injury.

Slightly overrated. Saying goodbye to someone who provided defensive flexibility while averaging 16-5-3 on 51/43/93 percent shooting is never easy, but $85 million over four years is a steep price to pay for someone who had missed 52 games over the past two seasons and sports a history of injury troubles dating back to his days at Virginia. And with Indiana inexplicably handing over a first-round pick that is likely to convey in the 2020 draft, Milwaukee now has even more ammunition to acquire a useful piece midseason.

16. Speaking of midseason trades, will the Bucks be able to swing an impact deal?

Maybe. Bradley Beal was probably always too rich for the Bucks’ blood, but now that he has signed an extension with Washington, the NBA trade sharks will be forced to circle some other struggling team.

Andre Iguodala is on an expiring deal in Memphis and will almost certainly finish the season elsewhere, but again, the Bucks don’t really have the contracts to match Iggy’s remaining $17.2 million. Bledsoe does make $15.6 million, which is enough to make a deal work, but I’m not sure if either side would be interested in that deal. Bledsoe is the Bucks’ third-best player on paper, though Milwaukee would presumably be fine with getting off his contract that extends through 2022-23. Would Memphis want Bledsoe just months after taking point guard Ja Morant with the second pick in the draft? On the flip side, acquiring Bledsoe does give the Grizzlies another asset to flip for additional picks or more depth as they continue their rebuild.

Ilyasova charges. Ilyasova drew a league-leading 49 charges last season (Blake Griffin was second with 30), which marked the third-straight year he finished inside the top-two in charges drawn across the league. Korver, on the other hand, has averaged just under 61 two-point field goals over the last two years and is likely to see his minutes reduced as Budenholzer sorts through his glut of shooting guards. It is also entirely possible Korver never steps inside the arc in Bud’s offensive system.

18. Five must-see home games during the first half of the season? 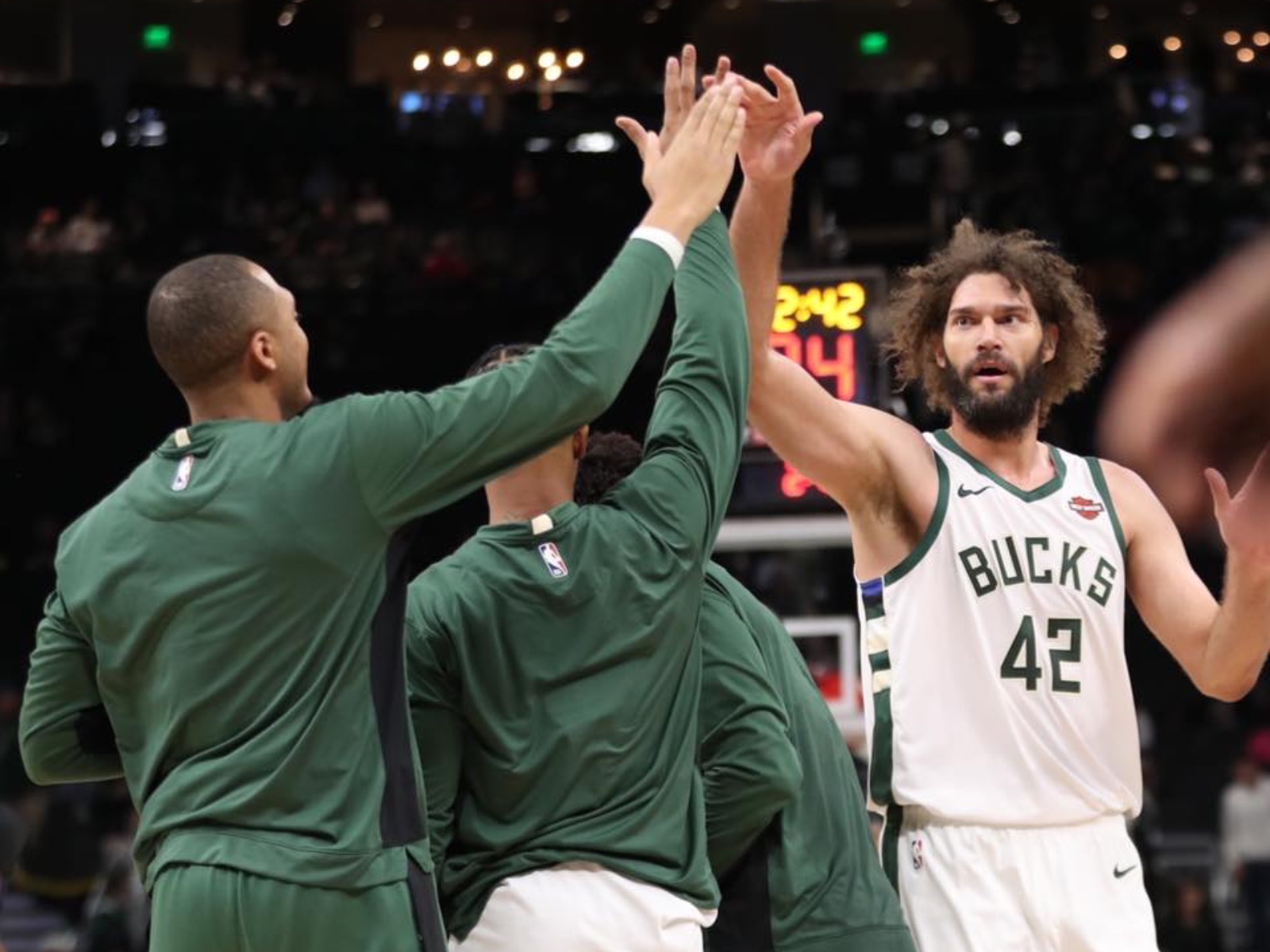 Over. The Bucks may not be the best team in the league, but they know who they are and they have Giannis. That’s enough to remain bullish on another 60(ish)-win campaign.

Eastern Conference champs with a loss to the Los Angeles Clippers in seven games in the NBA Finals.

Brian Foley Special to OnMilwaukee @briandfoley
Brian Foley is a Maryland native, but has quickly established roots in Milwaukee after graduating from Marquette University in May 2017 with a bachelor's degree in digital media. He has interned for several media organizations in the area, including TMJ4-TV, WTMJ Newsradio and ESPN Milwaukee, and continues to contribute to FanSided's national network of sites.

When Brian's not writing about sports, he is probably prattling on about Marquette hoops, digging through statistics, or re-binging his favorite television series. Any conversation that begins with a quote from "The Office" or "West Wing" is a surefire way to grab his attention.