At Game 1 on Sunday afternoon, the Bucks got punched in the mouth by the Boston Celtics. Monday night, Milwaukee returned the favor - and we've got ourselves a series. Here are 11 images telling the story of the Bucks' Game 2 smackdown.

At Game 1 on Sunday afternoon, the Bucks got punched in the mouth by the Boston Celtics. Monday night, in Game 2, Milwaukee returned the favor – and we've got ourselves a series.

The Bucks won handily Tuesday night, 123-102, in a game that wasn't even as close as that suggests – a very confusing result because I was told by multiple ESPN talking heads that the series was over. But instead, not only did the two teams play another game, but the Bucks won it and absolutely crushed the Celtics in the process. Very perplexing; I look forward to Paul Pierce explaining this faux pas.

Of course, stats and the score sheet could tell you how the Bucks fared against the Celtics, but pictures and videos are a lot more fun. So here are 11 key images of Milwaukee's Game 2 routing of the Celtics at Fiserv Forum.

Brook Lopez may not have looked great on the court Tuesday night – only 10 points on a tied for team-worst -12 – but he looked absolutely dynamite off the court, walking in with this outstanding Tacos jersey that is actually a real uniform for a real minor league baseball team from Fresno, California.

2. Sports on and off the court

Thanks @Bucks for recognizing @CoachMeganDuffy tonight at the game! Good luck and Beat Boston! #muwbb pic.twitter.com/3T62RDSXEq — Marquette WBB (@MarquetteWBB) May 1, 2019

There was no lack of local sports star power at Fiserv Forum on Tuesday – and not reserved just for the court. Packers wide receivers Davante Adams and J'Mon Moore represented the home state squad Tuesday, along with Wisconsin Badgers great Ron Dayne and new Marquette women's basketball coach Megan Duffy. Still no Aaron Rodgers this round, though ...

Bruce Pearl is longtime friends with "One call, that’s all." pic.twitter.com/vYsdNovNrO

Oh wow, a famous face in the front row at a Bucks game. And also Bruce Pearl.

Last game, the photo that explained it all featured Giannis getting demolished by the Celtics' Jaylen Brown. So in a nice twist, the image of the game for the second matchup is Giannis destroying not just Jaylen Brown, but pretty much the entire Boston Celtics team, in return.

We will also accept the Tzatziki tremor. 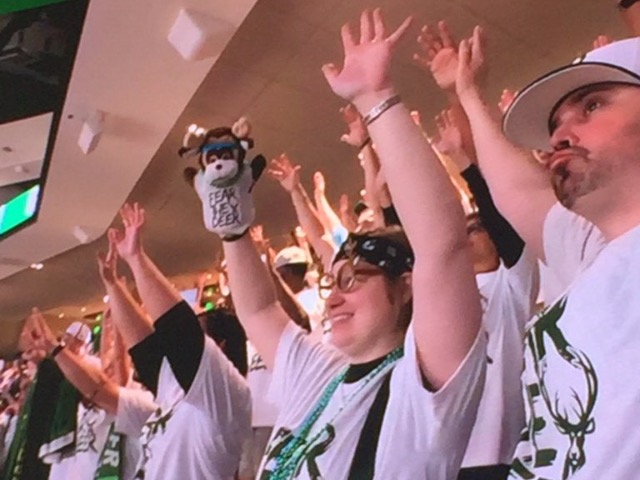 Dawwwww, the puppet's even got his hands in the air like the rest of the crowd, like the puppet thinks it's people! And according to its delightful Instagram, it's even got multiple jerseys and looks. I want to be friends with Puppet Bango.

Before the '90s hip-hop favorite's halftime show, the Bucks only outscored the Celtics by four points. After Markie's performance, the Bucks went on a 24-2 run to turn a tense game into a laugher. In conclusion, Biz Markie should perform the halftime show at every game at Fiserv Forum. And maybe the National Anthem too.

Again, Brook Lopez didn't have his finest game Tuesday night. But when it came to delivering meme-worthy faces and celebrations from the bench, the guy definitely filled the stat sheet.

Giannis Antetokounmpo says the Bucks had to respond in a big way because Milwaukee got their "ass whooped" in game 1 pic.twitter.com/19crlBcQLW — Def Pen Hoops (@DefPenHoops) May 1, 2019

I'd say kids are watching, but no children should've been allowed to witness the violence inflicted upon the Celtics Tuesday night.

Giannis sat through 3 hours of the Avengers without going to the bathroom he really is the MVP pic.twitter.com/KmS8et295F — Dime (@DimeUPROXX) May 1, 2019

And he didn't spoil the Endgame. What a champion. I hope next game he offers another movie review but for some tiny indie movie. "Giannis, what were your thoughts on the new Werner Herzog?" I demand this, sports reporters.