The Bucks' series win against the Celtics by the numbers

From the opening tip-off, the Bucks had Boston's number, and it was clear from the beginning that only one team was flying back to New England this week. Here's Milwaukee's big Game 5 victory by the numbers.

After fans were forced to enjoy the Bucks’ series win against the Detroit Pistons from their living rooms, Giannis and the Bucks gifted the Celtics with a single win so that Milwaukee could watch the team close out their series, four games to one, at home for a sold-out crowd.

From the opening tip-off, the Bucks had Boston’s number, and it was clear from the beginning that only one team was flying back to New England this week. Not only did Wednesday night’s victory seal the Bucks’ first trip to the Eastern Conference Finals since 2001, but it also marked the return of The President, Malcolm Brogdon, who suffered a right foot injury in the regular season.

Here is our breakdown of the Bucks’ massive 116-91 win over the Boston Celtics by the numbers: 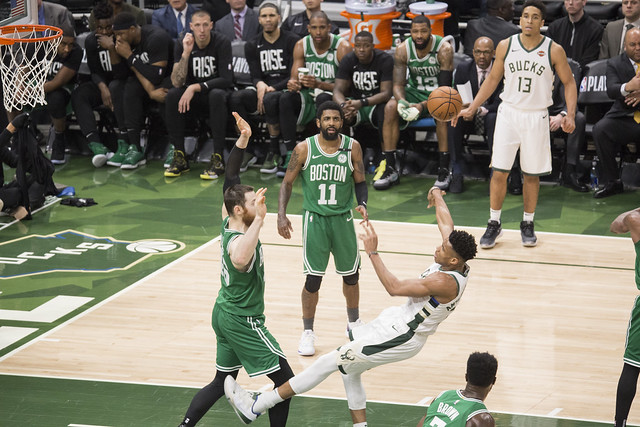 15: Three-point field goals for the Bucks

Only the Houston Rockets shoot more three-point field goals than the Milwaukee Bucks, and the team hasn’t changed this formula in the playoffs. The Bucks scored a total of 15 three-pointers during Game 5, outscoring Boston from beyond the arch by 24 points. With such a huge differential, the Celtics’ chances of stealing another game in Milwaukee were almost non-existent.

Many of the 15 three-pointers were big moments in the game, including one long-range shot where Giannis made a falling assist to Malcolm Brogdon for his first points since returning from his injury.

While the Bucks led the game for the majority of the first quarter, the Celtics inched back to tie the game during the last couple possessions of the quarter. Milwaukee answered back to start the second quarter, as the team scored 12 consecutive points to build a comfortable 31-19 lead. From this point on, the Celtics never recovered, and Giannis and the Bucks added to their lead throughout the rest of the game. 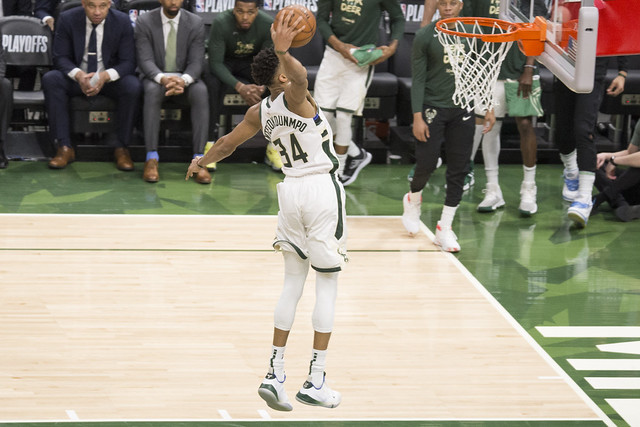 The MVP had a modest 20 points during Game 5 and still managed to lead all scorers in the series closer. The Greek Freak’s most impressive stat, though, was his +33 point differential, again proving that Giannis is one of the best, if not the best, two-way players in the NBA. Even when he isn’t having his biggest night scoring, the team plays its best when Giannis is on the court.

During the Bucks’ first three wins in their series with Boston, the third quarter is when Milwaukee really dominated and pulled away for the win. Wednesday night told a different story. The Bucks still outscored Boston in the third quarter, 28-23, but the team put up their biggest numbers in the fourth. The Bucks dropped 36 points in the final frame to finish out the game and make certain that the Celtics could not pull off a dramatic comeback. 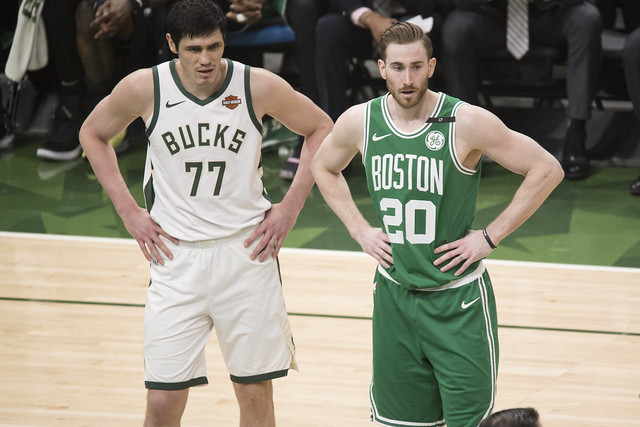 This is purely an estimate, but my guess is it takes Gordon Hayward three tins of 2.5 oz BluMaan Monarch matte paste (Hayward’s go-to product) to get his hair ready for each game. That retails at just north of $50, but I guess when you’re making $30 million to score seven points in an elimination game, you can afford it.

Milwaukee’s offensive talent was spread throughout the roster for Game 5 as a total of seven Bucks scores had points in the double digits. In addition to Giannis’ 20 and Khris Middleton’s 19, Mirotic, Bledsoe, Ilyasova, Hill and Brogdon all had 10 or more points. It’s comforting to know that the team can count on a large number of players to contribute on the offensive end – especially heading into the Eastern Conference Finals. 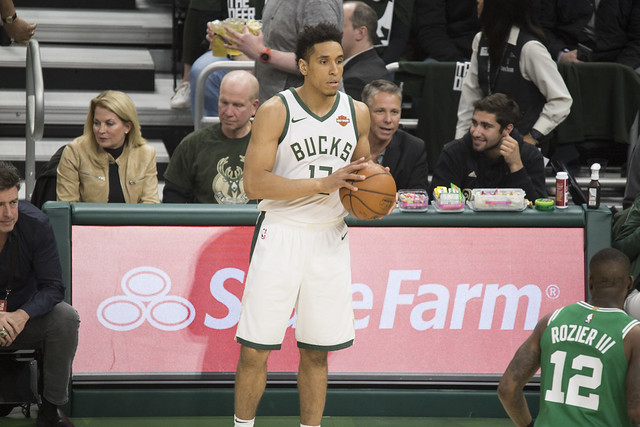 Malcolm Brogdon had 10 points in his 2019 playoff debut on Wednesday, but the biggest number in his stat line is the 17 minutes that Brogdon was able to contribute. The Bucks were 7-1 in the playoffs before The President’s return from his foot injury, and fans no longer need to fantasize about how well the Bucks will play when Brogdon is added back into the mix. Bledsoe and Hill have been huge as of late and will still get their minutes, but Milwaukee is an even better team with a healthy Malcolm Brogdon.

Jayson Tatum had one of the best rookie seasons last year and played a big role in sending the Bucks packing during their opening round playoff exit in 2018. But with Kyrie Irving dominating the team’s shots, the team’s other Duke alum has suffered a noticeable sophomore slump. Tatum’s presence this series has been virtually non-exist, and with his back against the wall during an elimination game, Tatum only scored three field goals for the night. 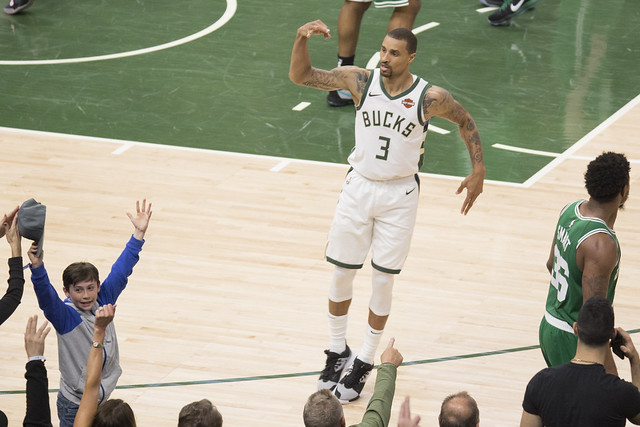 George Hill has been amazing against the Celtics. At times even outscoring Boston’s entire bench, Hill has helped lighten the load for Milwaukee’s starters by letting them rest as he puts up impressive numbers. His dominance should be to no one’s surprise though, as the veteran played his 111th playoff game on Wednesday.

A big knock on Milwaukee’s chances this year is their lack of playoff experience, and while that hasn’t stopped the Bucks so far, George Hill is likely serving as a leader in the locker room and on the court with his playoff experience. Let’s just hope that 111 keeps on increasing this postseason.

Kyrie Irving responded to criticism after Boston’s Game 4 loss by dismissing his poor shooting percentage and saying that he should have shot even more. A man of his word, Kyrie Irving did not shy away from the ball – and lucky for the Bucks, their defense contributed to a total of 15 missed shots by Uncle Drew. Irving had only a 28.6% field goal percentage and shot a smaller percentage from the field than the Bucks shot from long range. Irving is one of the best closers in basketball, but when you lose by 25 points, any last-second clutch shots are null and void.

40: Species of crow for Paul Pierce to choose from

Paul Pierce raised eyebrows this year when he said he was better than Dwayne Wade, but he really had people scratching their heads when he said that the series was over after the Celtics stole Game 1 in Milwaukee.

"As a team, I don’t know where Milwaukee goes from here, I think it’s over"

As we all know, the Bucks went on to win the next four games, and of course, the series was far from over. The Bucks embraced the meme that is Paul Pierce and played this soundbite after the final buzzer on Wednesday and now the former Celtics star has 40 different species to choose from when he eats crow due to his unsupported hot take.

The Bucks are halfway there and need just eight more wins until they can hoist the Larry O’Brien trophy for the first time since Kareem Abdul-Jabbar did so in 1971. But for now, all Giannis and company can do is wait and rest up as the Toronto Raptors and Philadelphia 76ers are still fighting to see who takes the last spot in the Eastern Conference Finals, which will kick off next week at the Fiserv Forum. 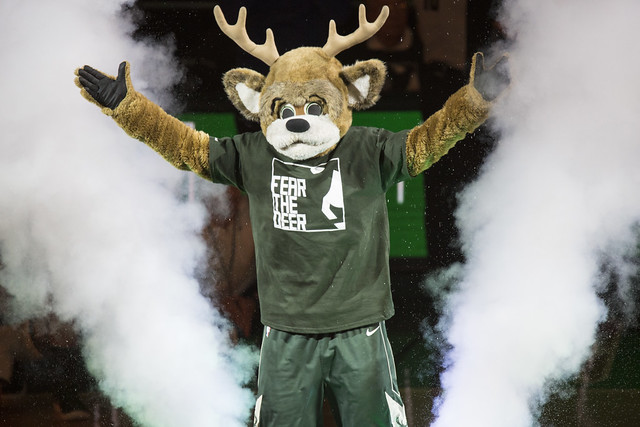