For the fourth year in a row, Milwaukee star Giannis Antetokounmpo had jokes at Bucks Media Day. And while, objectively, they were not good jokes, it is inarguably impossible not to laugh while listening to Antetokounmpo gleefully tell them. He's the best.

Since coming to the United States from Greece as a wide-eyed teenager selected by the Milwaukee Bucks with the 13th overall pick in the 2013 NBA Draft, Giannis Antetokounmpo has developed not only from a raw and unknown prospect to a budding league MVP candidate, but also from a jubilant kid trying to learn English to a confidently goofy jester eager to entertain his adoring fans (and even reporters).

For the fourth year in a row, Antetokounmpo had jokes at the annual Bucks Media Day. And while, objectively, they were not good jokes, it is still inarguably impossible not to laugh while listening to Antetokounmpo gleefully tell them.

Keep in mind, this was a guy who four years ago was funny in an endearingly naïve sort of way, tweeting, "I just taste for the first time a smothie..MAN GOD BLESS AMERICA" – he was a cultural neophyte, young and foreign and giddy and lovable. 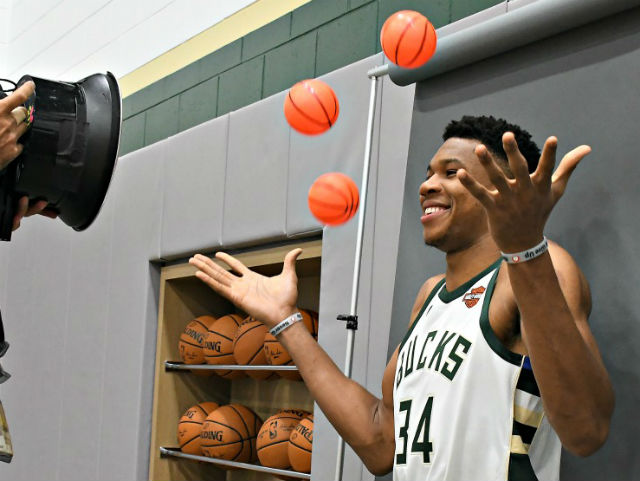 By the time all was said and done at Bucks Media Day, which took place Monday at the Froedtert & the Medical College of Wisconsin Sports Science Center, the team’s new state-of-the-art training facility, Antetokounmpo had told two jokes during his own time on stage, interrupted another player’s interview with one more and elicited innumerable grinning groans from those assembled and on social media.

So, how did we get here? Let’s look back at the four-year evolution of Giannis’ Media Day humor:

Entering his second year in Milwaukee, Antetokounmpo – coming off a NBA All-Rookie Second Team season – made his first Kanye-like disruption, walking up to Zaza Pachulia during his interview to give the then-Bucks center a Giannis bobblehead doll.

The Giannis bobblehead was to be given out to fans at a game later in the season, but at the time, Pachulia could only sit in bafflement and stare at it. Antetokounmpo didn’t say a word, but, as far as prop comedy goes, it sure beat Carrot Top.

After leading the Bucks to the playoffs and having them pick up the fourth-year option on his rookie contract, through the next season, Antetokounmpo was feeling more confident in the NBA. But that didn’t stop him from tricking reporters into thinking he was still uncomfortable with the language.

"You guys take it easy on me, because two months now I spent in Greece and I forgot how to speak English," he said before his Media Day interview. While journalists fumbled about to try and ask simple questions, Antetokounmpo replied facilely with thorough, well-articulated answers. He was foolin' us!

Antetokounmpo also showed off his hilariously basic art skills with a drawing of then-teammate Tyler Ennis.

Last year, following a triple-double-filled breakout season when he became the Bucks’ primary playmaker and did this, Antetokounmpo agreed to a $100 million contract extension and was clearly feeling himself. Giannis began his Media Day Q&A by once again telling reporters to take it easy on him, and he also informed them that he had a joke.

Cracking up himself on the punch line, Antetokounmpo then delivered an actually funnier line: "No one laughed, Jesus Christ," which got a more uproarious reaction.

After being named an All-Star, making the All-NBA Second Team and winning the league’s Most Improved Player award last year – and delightfully pranking fans during the season – it’s safe to say Antetokounmpo was eminently at ease during this Bucks Media Day. With expectations sky-high both on the basketball court and at the mic, he came to the stage prepared.

"Listen, this is a good one," he said in response to a question about whether he’s got another joke.

When the punchline fell flat – with reporters at least; Khris Middleton and a couple other players were practically rolling on the floor – Antetokounmpo tried to explain the reference to the 2014 hit "Na Na," before pivoting to a second, saving joke.

The "I had one about a moustache, but I shave it for later" quip was pretty great, and his sense of pride and self-satisfaction afterward was purely wonderful.

Then, two hours later, during the last player interview of Media Day, Antetokounmpo reappeared to interrupt Rashad Vaughn, and it was everything.

"OK, this is going to be good; you better laugh," he said to Vaughn, one of his close friends on the team. "So, have you guys seen the new movie ‘Constipation?’ No? It’s because it hasn’t come out yet!" And with that glorious bit of bathroom humor, Antetokounmpo joyfully dropped the mic and sprinted off stage, leaving his smiling teammate shaking his head.

"He has the worst jokes I’ve ever heard," Vaughn said.

Yes, he does. And it’s just another reason why he is the best.