The Bucks postponed complete humiliation and a postseason of immense questions for at least one game thanks to a nail-biting 118-115 win against the Heat. But this being 2020, of course this good news had to come with some absolutely devastating news in tow.

The season! IT LIVES!

Yes, the Bucks postponed complete humiliation and a postseason of immense questions for at least one game thanks to a thrilling, nail-biting 118-115 win against the Miami Heat in the bubble. But this being 2020, of course this good news had to come with some absolutely devastating news in tow: Giannis Antetokounmpo, the assumed two-time MVP, re-aggravated his ankle injury from Game 3 – and it looked far worse this time.

But while the city of Milwaukee collectively offers their ankles to Giannis, let's take a final look back at Sunday's massive win.

We haven't had much to report on in terms of fashion inside the bubble since the players could only pack so much, but we've got a rare red carpet update from Game 4. Please note Bucks center and Disney super fan Brook Lopez's t-shirt: 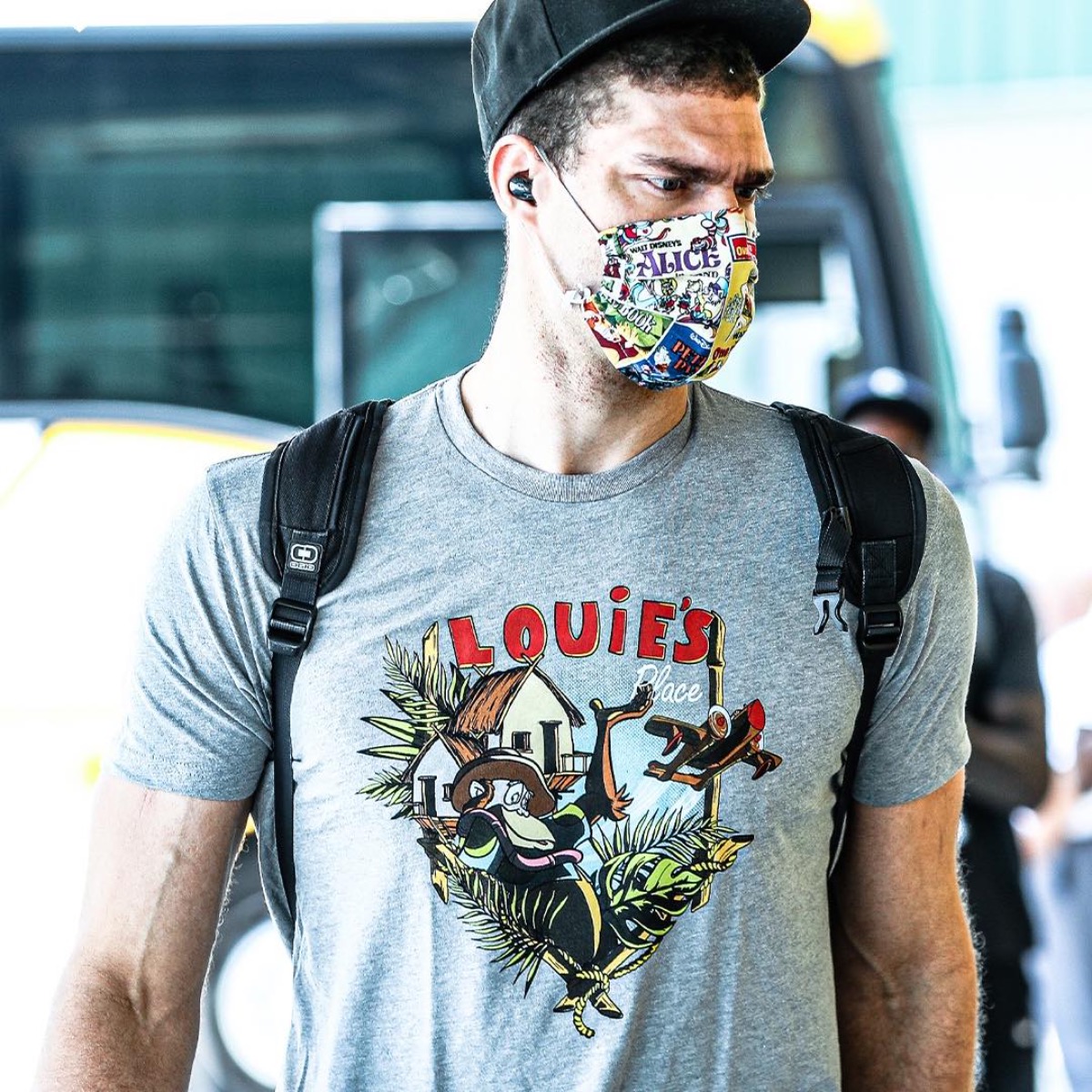 Why yes, that shirt is a reference to "TailSpin," the animated series about Baloo from "The Jungle Book" having literally high-flying adventures as a pilot in a post-WWI world. (Saturday morning cartoons are WEIRD.) And yes, that mask is covered in classic Disney movies. Maybe Lopez was trying to summon as much Disney magic as possible for the Bucks on Sunday.

As if the Bucks could lose with this adorable sight in the crowd.

Bad news, Clutch Crew: I think you've been replaced next year by the Bucks babies. How could you lose with a little fan section of adorable babies cheering you on!? Answer: You can't. Cool that the Bucks are going to go 82-0 next season.

Giannis clearly wasn't going to let the Bucks go home without a fight. Though Milwaukee looked a little shaky in the early going, Antetokounmpo wouldn't let the Bucks fall out of contention, scoring 19 points in just 11 minutes. If he kept up those numbers for the rest of the game, clearly we were in for a vintage MVP-type performance from Giannis that would drive the Bucks to ... oh no, I'm about to reveal the terrifying polar opposite happened now, aren't I?

In case the team's backs were against the wall enough ...

Well, that scream is the soundtrack to all of nightmares for the next month!

Indeed, on a drive to the basket, Giannis rolled his already gimpy ankle, falling to the ground with an agonized shout. And while a similar moment happened on Friday and ended up as a false alarm, Milwaukee fans weren't so lucky this time as Giannis went back to the locker room and never returned to the court – perhaps for the remainder of the 2019-2020 season too. Get better soon, Greek Freak – and remember, if you need to borrow an ankle, I've got two here I'm not particularly attached to.

Even on a leg and a third, Giannis still inspires. Hobbled by his ankle, Giannis still took the free throw line (if he hadn't, he wouldn't have been able to return if it ended up being nothing) and sunk one of two free throws.

You can question a lot about the Bucks these playoffs, but please never question Giannis, his toughness, his spirit and his desire to win.

Down by one, with the entire season on the line, the final play in regulation went exactly where you expected: to ... Donte DiVincenzo? Uhhhhh, sure?

Thankfully for Bucks fans (and for Coach Bud, who could've added another monumental gaffe to an already unspectacular playoff run), the Big Ragu was fouled on his drive to the hoop and made at least one free throw, tying the game up and sending the Bucks and Heat to overtime. And there, the ball was put in much more secure hands ...

As one who has always stood up for Khris Middleton and was very happy the Bucks resigned him, Game 4 was a very vindicating experience. With the team's number one star down for the game, Middleton put the Bucks on his back, scoring a game-high 36 points including a franchise-record 21 in the third frame and the dagger three in overtime to lock in the Milwaukee win. People have grumbled for a while about Middleton – that he's not a real number two next to Giannis, that he wasn't worth the big contract he got, that he disappears in games – but Khash silenced all of that on Sunday.

Even while in pain and barely able to stand, Giannis was there for his team coming off the court on Sunday.

Giannis congratulating the Bucks after the win in Game 4. pic.twitter.com/5XFphnXjgU — SportsCenter (@SportsCenter) September 6, 2020

The odds say the Bucks won't make it beyond this round, but between the Bucks' collective stand for social justice and Giannis being a dream teammate, Milwaukee has a lot to be proud of in the 2020 NBA playoff bubble.

I'm no medical expert here, but this doesn't look like the face of a man who thinks that he's playing another game this week – much less this season. Add in that he gingerly left the area in a walking boot ...

... and the Bucks might just require another heroic performance from the supporting cast if we want to see a Game 6. Come on, fate; you owe Milwaukee one.