The Bucks' home opener on Saturday had everyone on the edge of their seats, but unfortunately it didn't quite go the way that the Fiserv Forum's 17,467 fans hoped for.

The Bucks’ home opener on Saturday had everyone on the edge of their seats, but unfortunately it didn’t quite go the way that the Fiserv Forum’s 17,467 fans hoped for.

From Giannis’ 29 points, 17 rebounds and nine assists to the +16 point differential that Miami’s Justise Winslow put up on Saturday during his 41 minutes on the court, there were a lot of stats and numbers to process following the game.

Here is our breakdown of the Bucks’ home opener loss by the numbers:

17: The Bucks’ impressive lead at half-time

Throughout the majority of Saturday’s contest, fans at Fiserv Forum couldn’t have felt better about the team’s chances of pulling off a home opener victory against Miami. From the early moments in the third quarter, it was all Milwaukee. And going into the locker room, the Bucks dominated the Heat at the half, 70-53, a lead they would later build on to open the second half. The team was firing on all cylinders, the roster’s new additions were looking great and the team’s passing was second to none.

Unfortunately for Bucks fans, the game did not end at the 24-minute mark.

The Bucks’ performance to kick off the game was so dominant that ESPN measured Milwaukee’s win probably at 97.9%, even with nearly half of the game left to go, while the Bucks led the Heat, 74-53. Anything can happen in the NBA, though, and 2.1% was all Miami needed to get themselves back into the game and steal a win on the road.

1: Assists needed for Giannis’ second triple double of the season

Almost beginning his next MVP campaign with back-to-back triple doubles, Giannis was just one assist shy from reaching double digits in points, rebounds and assists on Saturday. The Greak Freak put up a solid 29 points, while adding an impressive 17 rebounds and 9 assists to his stat line. Giannis is coming out strong to start the season, and fans can expect another great year from the MVP. 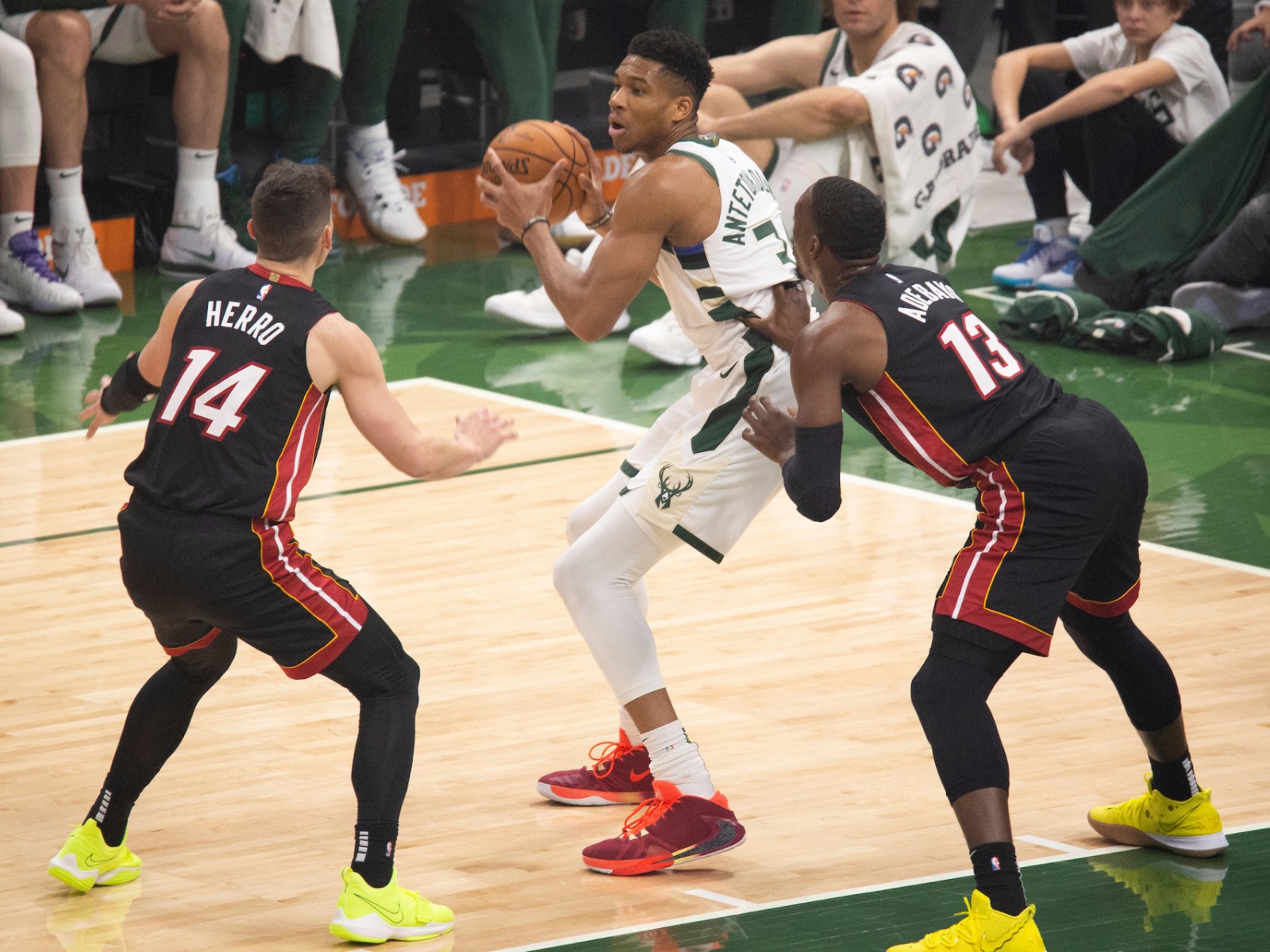 A few Miami Heat players stood out on Saturday, playing big roles in their upset victory. One of which was former Duke Blue Devil Justise Winslow. The 23-year-old was just 4 for 16, with 10 points on Saturday afternoon, but the team was best when he was on the court, which was the vast majority of the game. Winslow logged 41 minutes and was +16 on the night, the best point differential among all players on Saturday, due in part to his tenacious defensive play.

25: Dragic’s points off the bench

Another standout Heat player came from an unlikely source, as Goran Dragic came off the bench to contribute 25 points for Miami on Saturday. Dragic led all Miami scorers against Milwaukee and shot just over 43%. The 11th year veteran has been one of Miami’s best players for years, and he came up big for his team on Saturday to quiet the sold out crowd.

5: Missed three-pointers from the Greek Freak

While Giannis had a dominating performance yesterday, with such a close game, it’s difficult not to wonder what things could have gone differently that could have changed the outcome of the game. One thing that certainly didn’t help the Bucks was Giannis’ efforts from behind the three-point line. The Greek Freak missed all five of his three-point attempts on Saturday, and while fans are happy to see Giannis working on his shooting game, yesterday just wasn’t his best night from beyond the arch.

53: Minutes of basketball played in the home opener

One bright side of Saturday’s loss? Fans benefited from some free basketball, with five minutes of overtime after Giannis’ highlight buzzer beater in the fourth quarter of the nail biting home opener. Although the crowd wanted to see the good guys come out with the win, Saturday’s game was an entertaining edge-of-your-seat game that fans won’t soon forget. 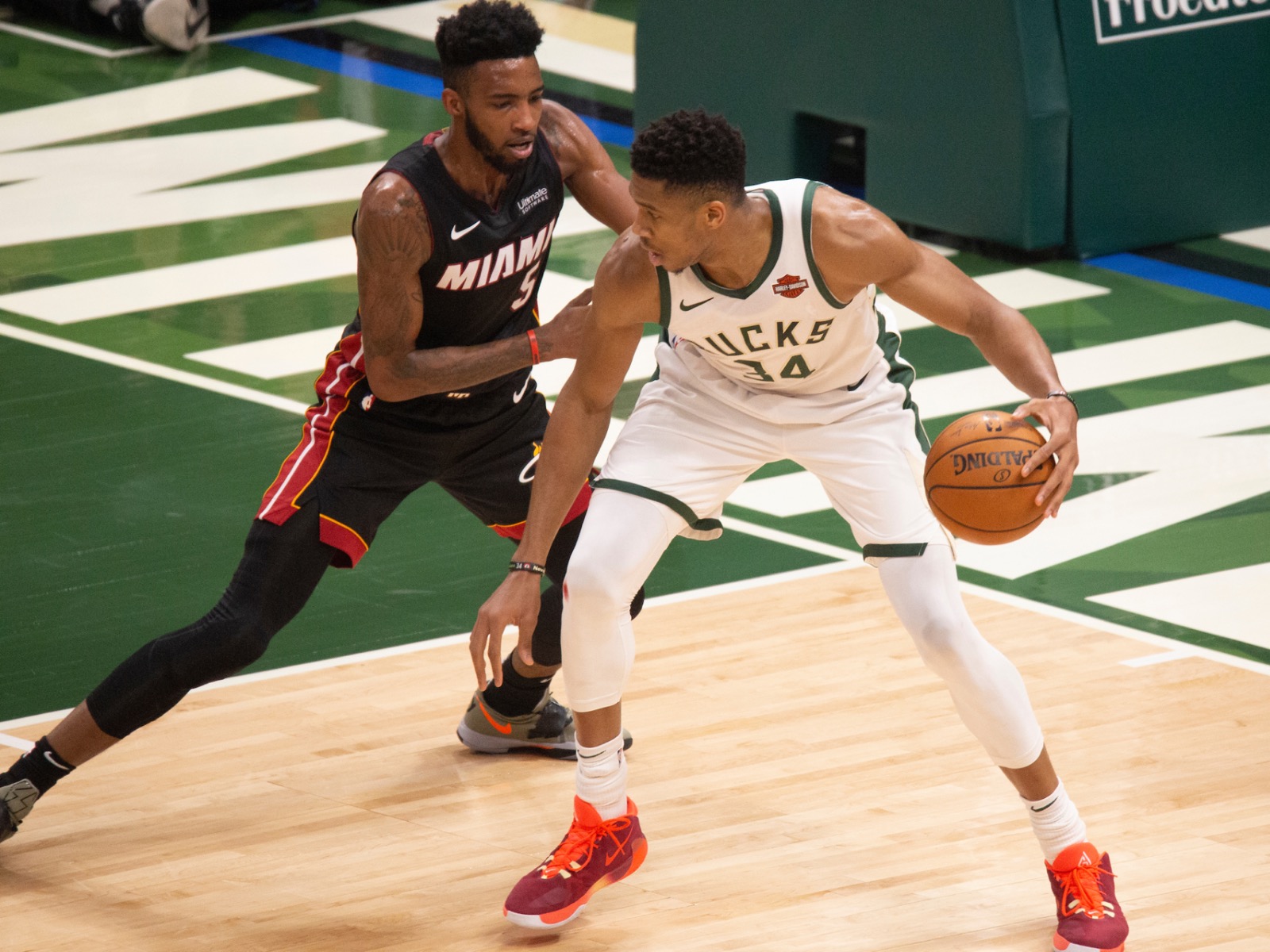 Among his many highlights, one of Giannis’ lowlights on Saturday included his eight turnovers throughout the game. That number capped at eight a minute into overtime as Giannis was called for an offensive foul when the game was tied at 123. From that moment on, it was all Miami – and it also marked the second time in two games that Giannis has fouled out. Let’s hope these first two games were just a fluke and not a recipe for teams to get Giannis out of the game. An MVP’s impact is minimal when he’s forced to sit on the bench.

Despite the fact that their superstar MVP fouled out early into overtime, Milwaukee still had plenty of chances to win Saturday’s contest in OT or to at least extend the game to a second overtime. During the second half of overtime, nerves seemed to have got the best out of Miami as the Heat missed four consecutive free throws, giving the Bucks multiple chances to tie the game. Unfortunately the Bucks just couldn’t cash in on the opportunities given to them and ultimately lost the game 131-126.

80: Games left in the regular season

It was a sad and embarrassing loss – but it’s best to remember that it was just one game. The Bucks wouldn’t have expected to lose their home opener, especially after their dominating first half, but there are still 80 games left in the regular season. Coach Budenholzer will certainly rally the troops and make sure that Giannis and company learns from their mistakes on Saturday.

Milwaukee returns to Fiserv Forum on Monday against the Cleveland Cavaliers.

Here's the second half of the Bucks' regular season schedule

Bucks drop fifth straight with 110-96 loss to Raptors, by the numbers