Fiserv Forum hosted the two best teams in the NBA on Thursday night, as the Eastern Conference's top-seeded Milwaukee Bucks took on the #1 Los Angeles Lakers in the West. Here's our breakdown of the Bucks' win over the Los Angeles Lakers by the numbers:

Fiserv Forum hosted the two best teams in the NBA on Thursday night, as the Eastern Conference’s top-seeded Milwaukee Bucks took on the #1 Los Angeles Lakers in the West. Perhaps the biggest regular season game in the building’s short history, the two 24-4 heavyweights battled for the league’s best record and the race for the first to 25 wins.

The matchup also marked LeBron James’ first visit to Milwaukee as a Laker and served as a potential preview of the NBA Finals, according to many. Needless to say, the entire city was energized for the sold out and nationally televised contest.

Here’s our breakdown of the Bucks’ cross-conference win over the Los Angeles Lakers by the numbers:

34: Points for the Greek Freak

Giannis snatched the metaphorical crown from King James on Thursday night as he bested one of the league’s greatest players of all time. Leading the Bucks with 34 points, the Greek Freak also led his team in rebounds (11) and assists (seven) during his dominating performance. Giannis recognized the importance of Thursday’s game and refused to let his team drop two straight games, and he did so through 32 excellent minutes on the court. 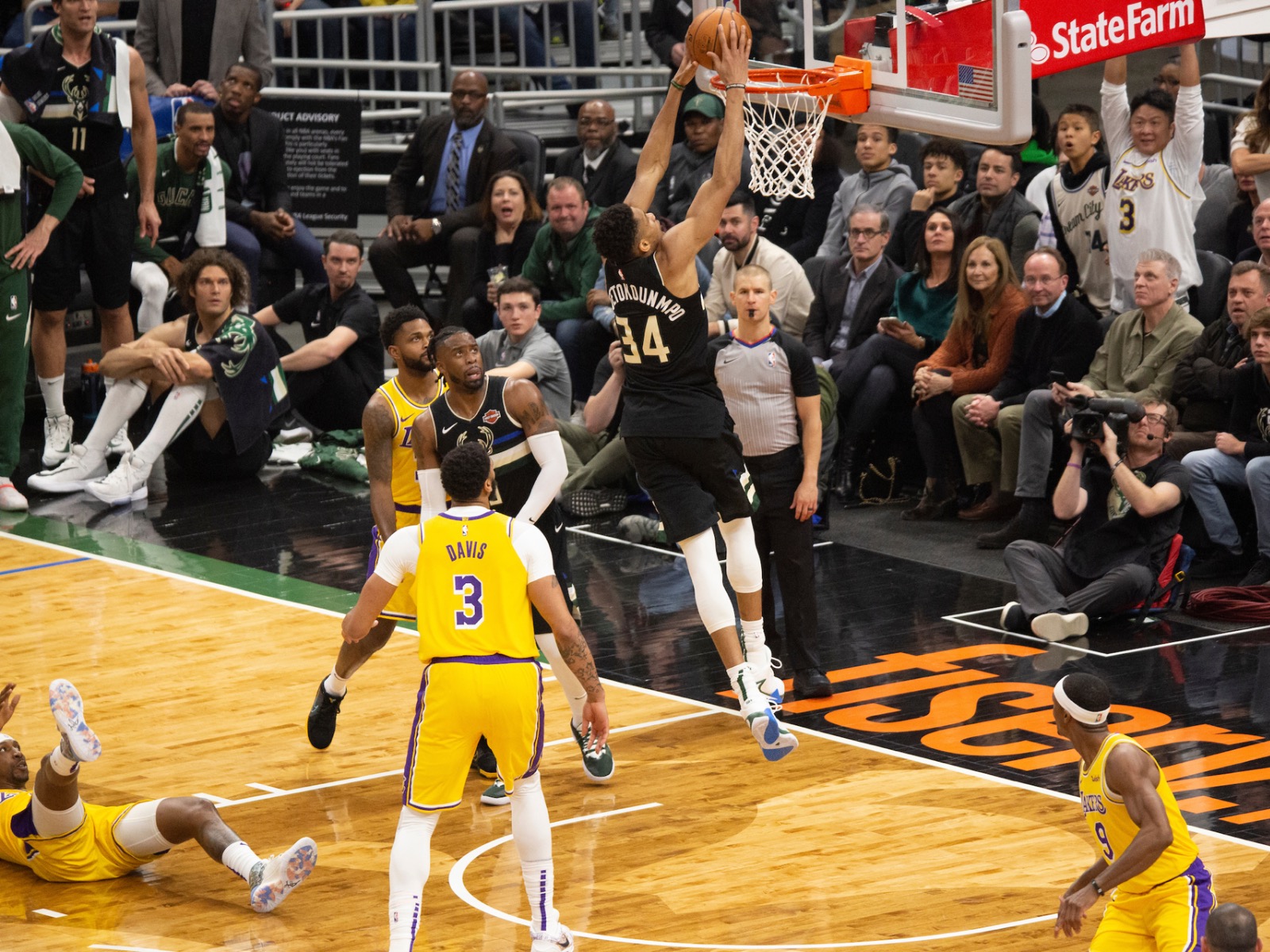 The stars aligned last night as the two best teams in the NBA – one in the East and one in the West – faced off with identical records of 24-4. However, only one team would reach the 25-win milestone last night, and that team was coach Mike Budenholzer’s Milwaukee Bucks. Although the Lakers played great at times and certainly made things interesting in the second half, Milwaukee controlled the majority of the game and led Los Angeles from the 6:16 mark in the first quarter and beyond.

Milwaukee now has sole possession of the best record in the league and leads the Eastern Conference by an impressive five games, with the Boston Celtics looking up from second place at 18-7.

Giannis continues to grow as a player as he makes his case for a consecutive MVP title. One such area where the Greek Freak is improving is his confidence behind the three-point line, and last night was a clear example. Giannis had a career-high five three-point field goals as his 15 points from beyond the arc kept the Lakers at a distance throughout the game. As defenders give him space, Giannis is showing his confidence from long range, and if teams adjust and close the gaps on defense, then the league’s leader in dunks will only have easier trips to the basket. 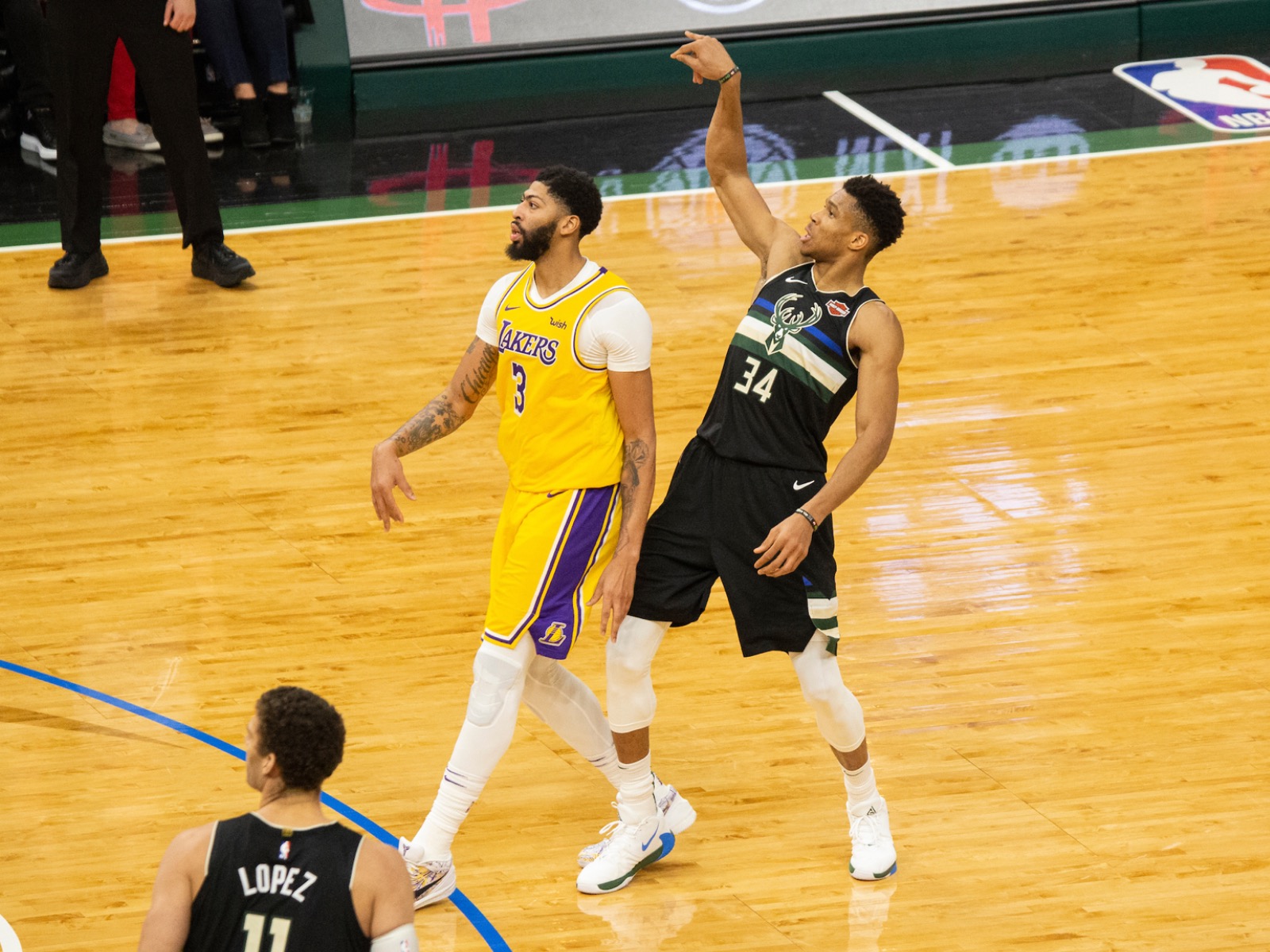 Fiserv Forum was standing room only on Thursday night as everyone and their mother wanted to watch the number one teams match up. While there was a fair share of yellow and purple throughout the sold out arena, Milwaukee fans were loud and proud as the Bucks dominated Los Angeles. With only two home losses this season, the Fiserv Forum continues to be one of the toughest places to play for opposing teams.

42: Second quarter points for the Bucks 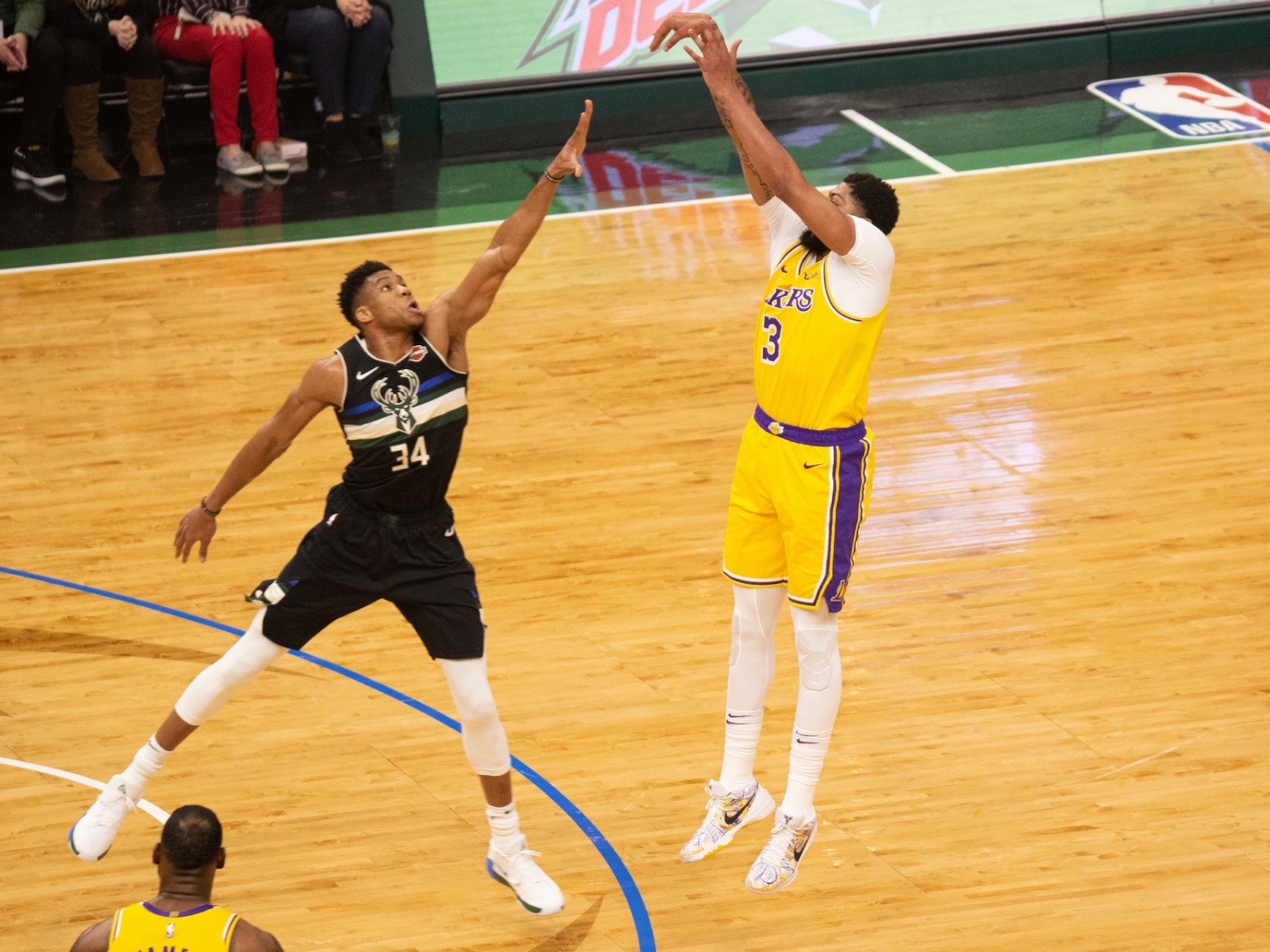 Surprisingly Giannis did not lead all scorers on Thursday night; that stat goes to Anthony Davis who put up 36 points in a losing effort. Facing the Bucks for his first time as a Laker, Davis had a monster game and proved that Giannis isn’t the only superstar big man on the court. Fortunately for Milwaukee, 36 was not enough for Los Angeles to pull off an upset.

In addition to Giannis’ great performance, the Bucks can also credit Thursday night’s big win to their excellent three-point shooting. While Giannis, of course, had a career-high beyond the arc, the team shot 41 percent from behind the three-point line and scored 16 three-pointers throughout the game, compared to Los Angeles’ 12 made triples at 34.3 percent. 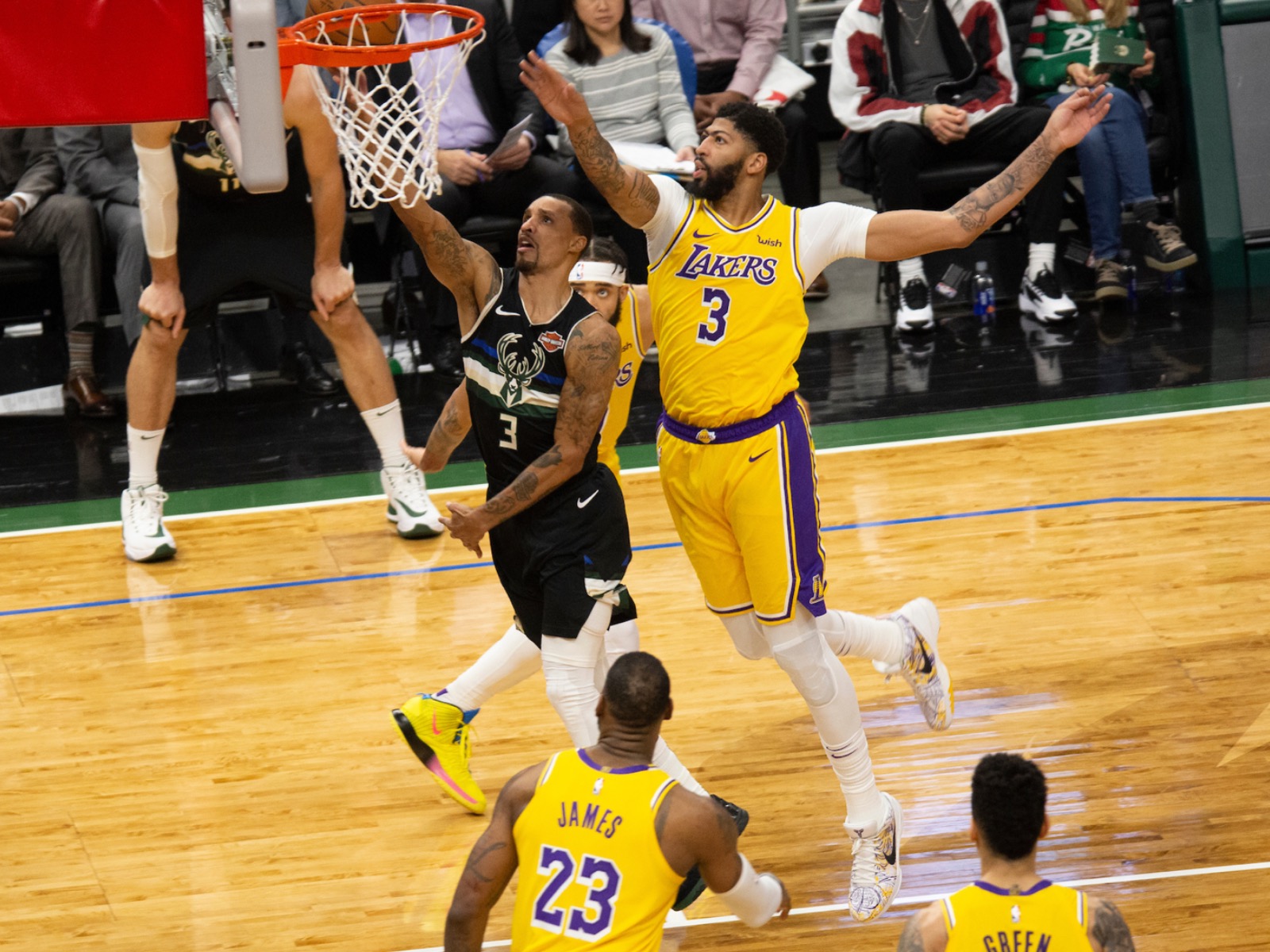 21: Points of the bench from George Hill

George Hill continues to be one of the Bucks’ biggest role players. Hill was second in scoring for Milwaukee on Thursday, putting up 21 points from the bench, shooting 7/12 on the night. Just when it looked like the Lakers were starting to come back, George Hill dropped a big three to quiet the Lakers fans in attendance. With Eric Bledsoe resting an injury, George Hill was able to come off the bench and put in the major minutes and great numbers for the team.

While LeBron James certainly didn’t have a horrible game, the MVP candidate did not match the efforts of the other candidate on the court. In fact, LeBron had one of the worst point differentials among all players, despite his 11 assists and 12 rebounds. King James is one of the best players in the league, but his team was not at its best when he was on the court. 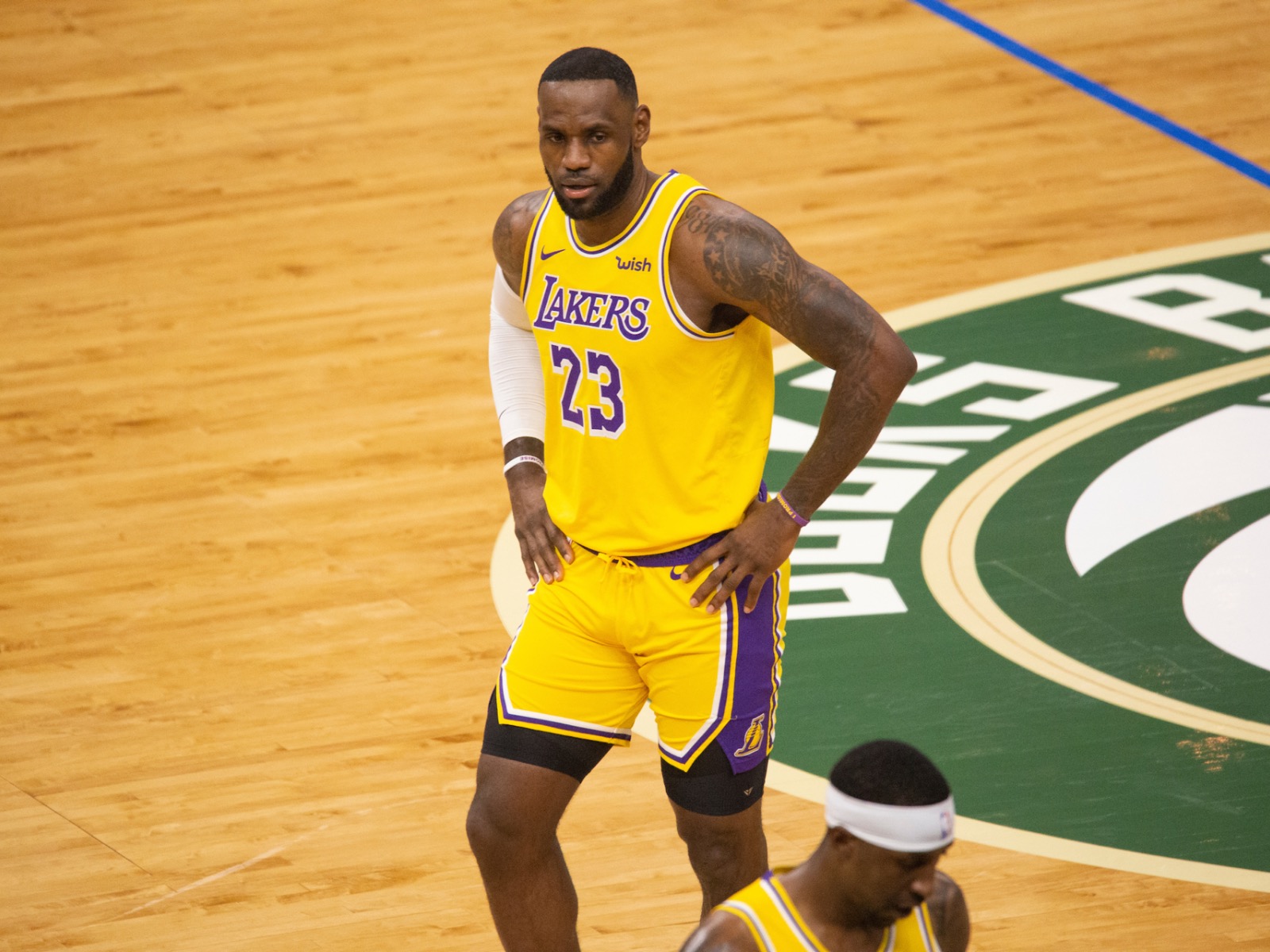 77: More days until the Bucks and Lakers’ next matchu

Thursday night’s game was one to remember, and fans of both teams already cannot wait until the teams meet again. The Lakers will host the Bucks in 77 days, on March 6.

Don’t expect the teams to have identical records again, but it certainly could be another #1 versus #1 contest. But if both teams play as well as they did last night and this season thus far, the Bucks and Lakers will meet up a few more times in 2020.