Listen, I'm going to make this as quick as possible because nobody wants to remember today. Here are nine photos from today's depressing start to the playoffs.

Listen, I'm going to make this as quick as possible because nobody wants to remember today.

Let's just say that the undermanned eight-seed Orlando Magic beat the Bucks in Game 1 of their first-round playoff series, 122-110, and it was rarely closer than that. And now let's look at some photos from the game and amongst fans suffering through this miserable showing, and then collectively pop into that clinic that does the memory erasing from "Eternal Sunshine of the Spotless Mind," because this game was full trash.

Here are nine photos from today's depressing start to the playoffs. 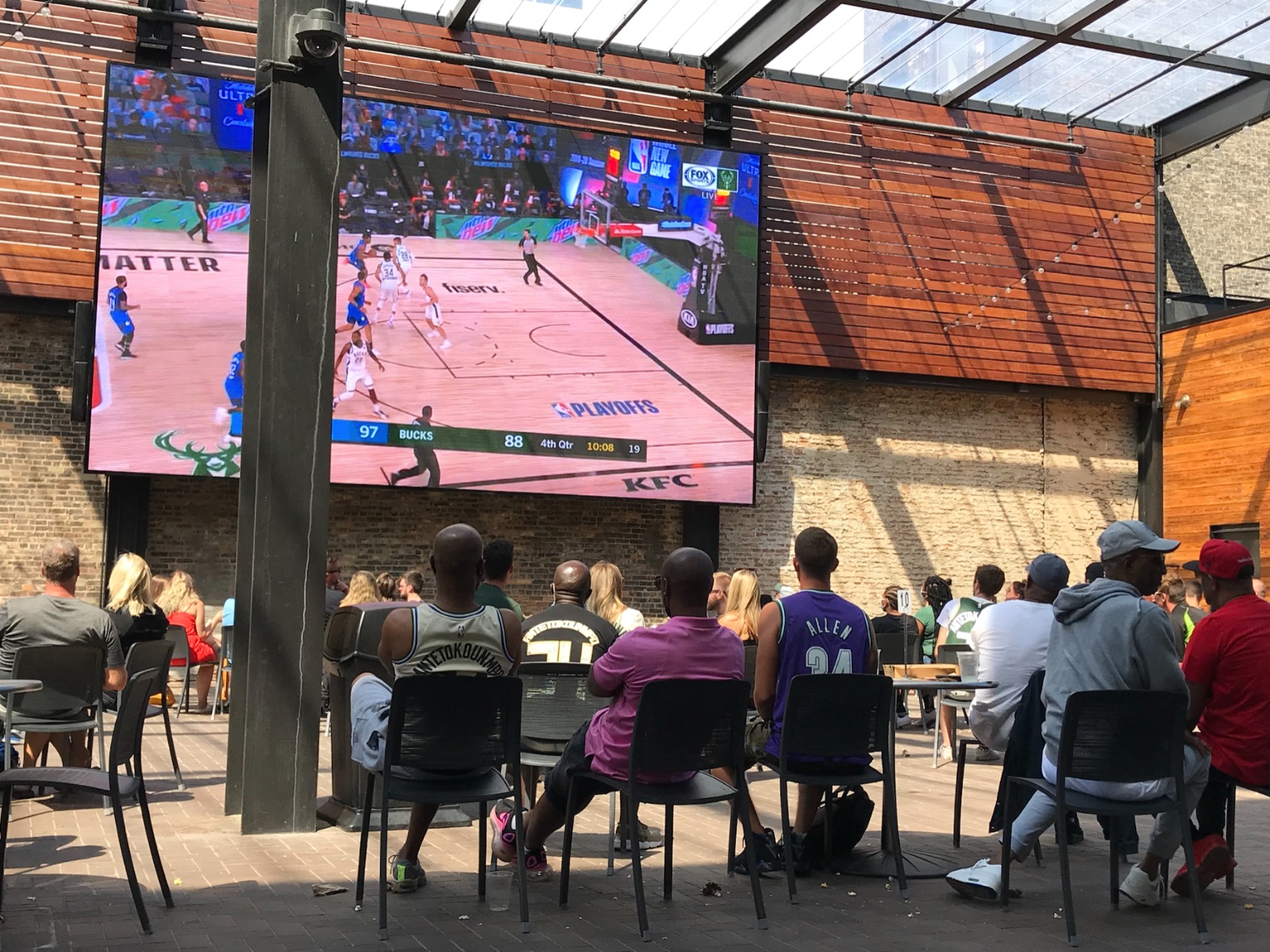 Fans weren't able to enjoy (or the polar opposite of that) Game 1 from inside Fiserv Forum, but a number of Bucks faithful still gathered at the Beer Garden (or *coughs* the Deer Garden) in Deer District to cheer on the team from a distance. You could still grab beverages and snacks from the stand, the tables were safely distanced and spread out, masks were a standard sight when people were away from their tables and groups, and it's an outdoor venue, which is safer and less of a risk in COVID times than an indoor viewing party.

2. At least this hat looked good 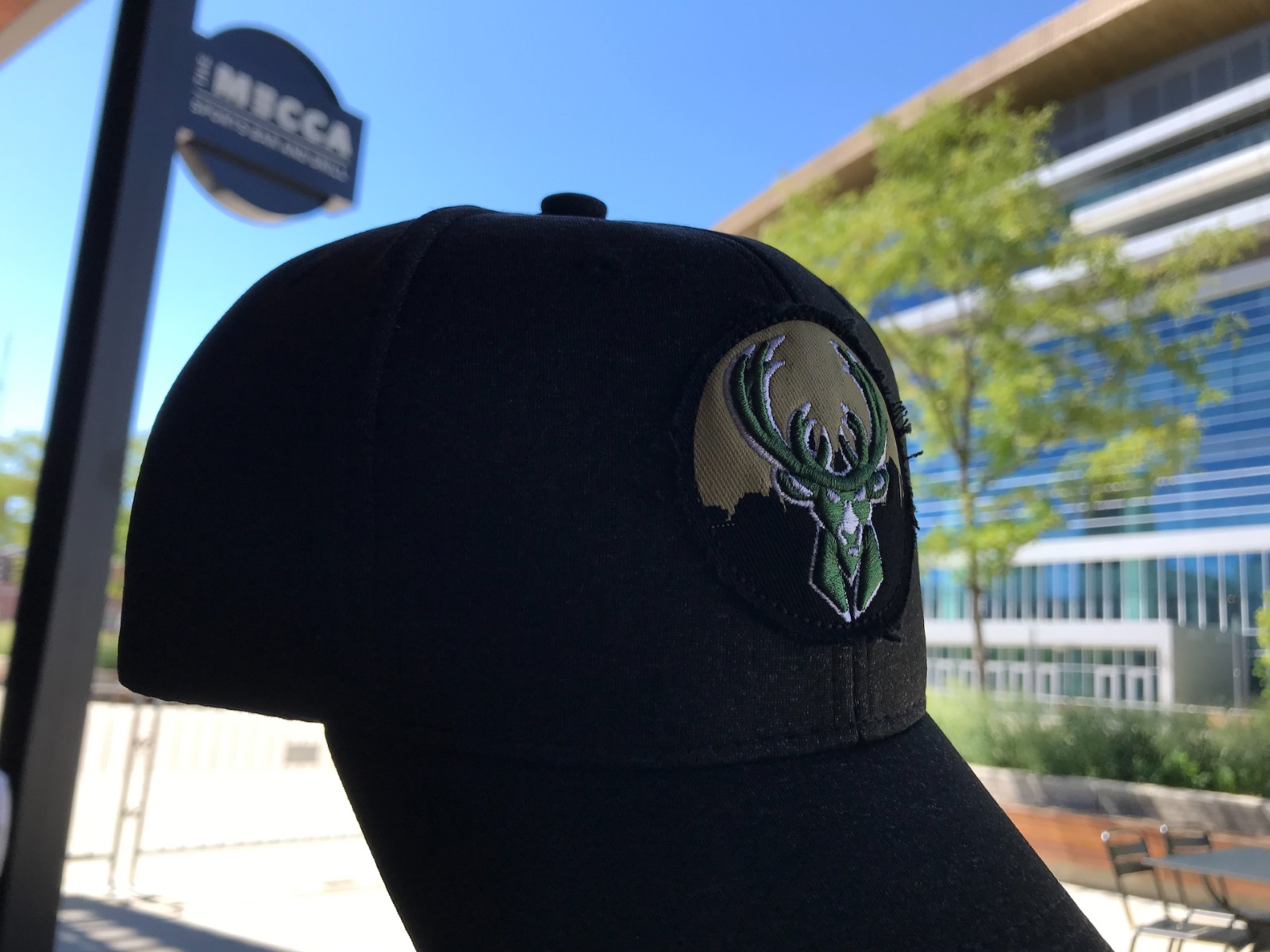 In case the gorgeous weather, big screen and open seating weren't enough to get you down to Deer District for the first game, The MECCA Sports Bar & Grill had a particularly good-looking bonus incentive: this nifty hat, which was free for all guests with a reservation. (And yes, you could choose indoor or outdoor patio seating based on your level of comfort.) Stay tuned to MECCA's Facebook page for more playoff deals – ones that hopefully come with Bucks wins in the future.

There's a lot of blame to go around the Bucks for today's miserable performance, but none of it should land on Giannis' shoulders. The Greek Freak put up a double-double with 31 points and 17 rebounds to go with seven assists. He also had five turnovers, so sure, he could've played a cleaner game ... but Giannis showed up for Game 1. The rest of the team? Harder to say.

A post shared by EXPEDIENTE DEPORTIVO (@expedientedeportivo) on Aug 18, 2020 at 1:26pm PDT

Basketball fans may be familiar with the name Nikola Vucevic, but for casual fans who dip in exclusively for Bucks game: Meet Nikola Vucevic. He is good at sports, and he now owes Milwaukee an apology. The Magic's big-money man had to carry Orlando's injury-ravaged team, playing without Jonathan Issac, Mo Bamba and Aaron Gordon, and he took on the challenge, scoring a season-high 35 points along with 14 rebounds and powering his team to the upset. The Bucks will obviously have to figure out how to hold him in Game 2 – and keep the lid on sharpshooter Evan Fournier, who only scored nine points on Tuesday afternoon.

Guess we found the one part of Disney World that Brook Lopez doesn't like. Here's to Lopez and company stomping the Magic throughout the rest of the series rather than stomping folding chairs.

6. Your one Khris Middleton highlight

That was your one Khris Middleton highlight for Game 1.

Besides the first basket and a few nice alley-oops to Giannis, the oddly hotly-debated Bucks number two scorer gave fans plenty of reason to debate him more with a quiet-bordering-on-silent 14 points. He'll have to show up more regularly if the Bucks stand a chance of heading back to the Eastern Conference Finals and beyond. 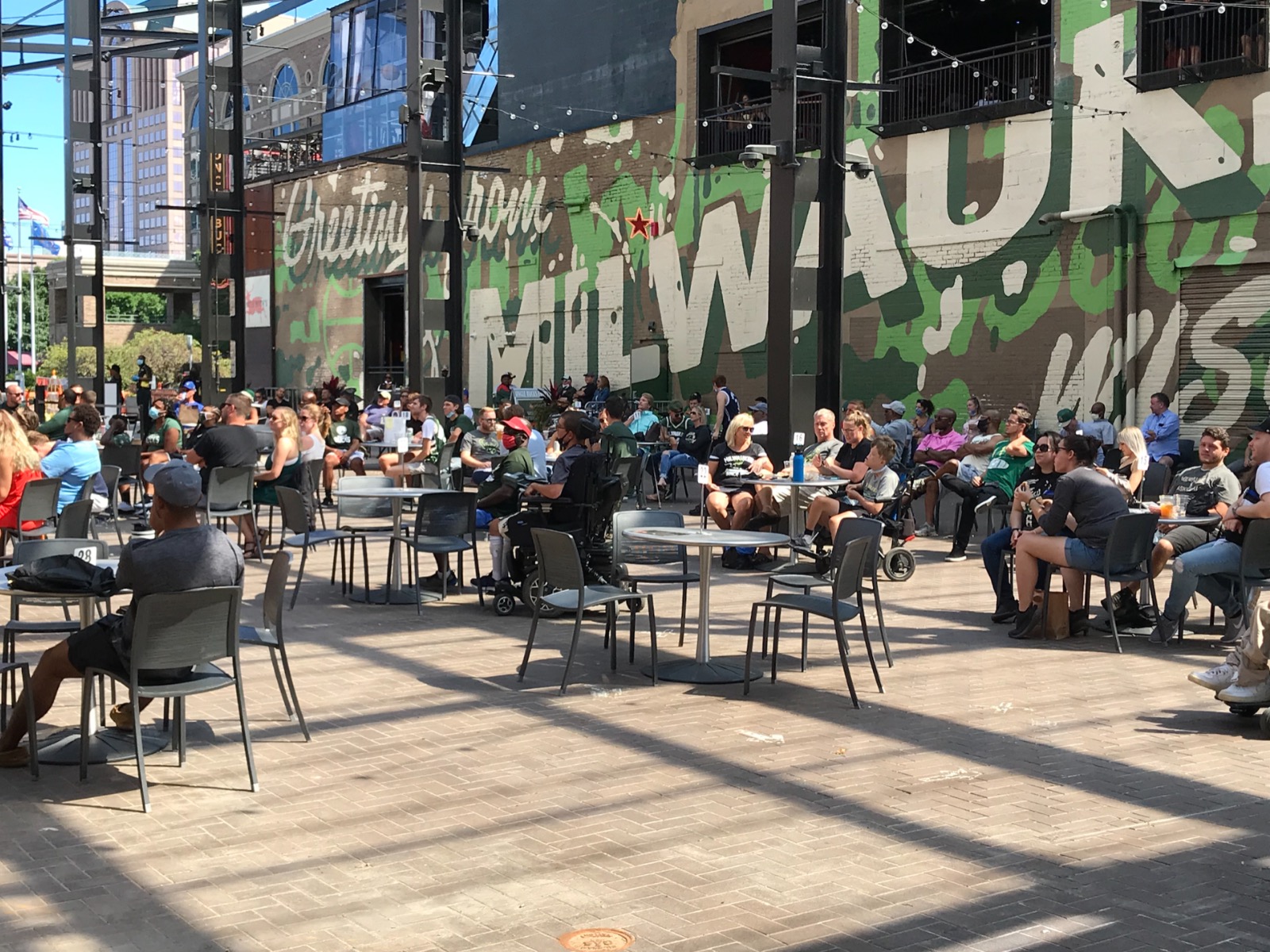 The game didn't give Milwaukee much to cheer about, but the city still put in a respectable showing. Some groups looked a little close or too bunched together near the end – maybe a rule trying to keep people at their respective tables would help make sure fans didn't migrate their chairs too closely – but it was still outdoors, there was still smart masking and distancing overall, and there was still something heartening at least about seeing our city gathered together, even if it wasn't in its usual, carefree fashion.

Looking for a silver lining from today's game? Here's what happened the last time the Bucks dramatically lost the first game in a playoff series.

Just a reminder that the last time the #Bucks lost game 1 in a series Paul Pierce declared it "over" then Milwaukee won 4 in a row. This games was beyond ugly, but the season is a long way from over. pic.twitter.com/9qvoihoXPZ — Scott Grodsky (@ScottGrodsky) August 18, 2020

LMFAO BUCKS WERE JUST HOLDING THIS THEN PLAYED IT POSTGAME ON THE JUMBOTRON ï¿½~ï¿½ï¿½~ï¿½ï¿½~ï¿½ @paulpierce34 pic.twitter.com/ZtvWgN7LQM — MKE Bucks News (@BucksNewsNStuff) May 9, 2019

See!? It just ended up going poorly for the Bucks' opponent and Paul Pierce! And the last time the Magic won the first game in a first-round series in a surprising upset? Just last year ... against the future NBA champion Toronto Raptors. Plus, you can't be #BucksInSix without losing a few games! Right? RIGHT!?

9. Ending on a high note

Between a non-existent DNC and now this loss – fun fact: apparently the third-largest playoff upset in 20 years! – Milwaukee's had a rough week, so here's something nice to look at to hopefully wash some of those sad feelings away.

Here's to things going better on Thursday in Game 2.