Ray Allen got his start in Milwaukee, first reached stardom here and will be remembered as one of the best players in team history. This is an ode to the nearly seven-year tenure with the Bucks of No. 34, who officially retired Tuesday, by way of my 15 favorite things about him.

Ray Allen officially retired on Tuesday, and it’s hard to think of a player who was more popular in Milwaukee while he was here and still as beloved after he left over the last three decades than No. 34 in purple.

Allen hadn’t played a professional basketball game in two years – not since the Miami Heat lost the 2014 championship to the San Antonio Spurs – and, after deliberately sitting out the 2014-15 season and mulling a comeback for the past year (including rumors about returning to the Bucks), he formally announced his decision to hang up the high tops in a "Letter to My Younger Self" for The Players’ Tribune. The excellent essay ends with Allen advocating to himself to continue working hard – along with three-point shooting, his most celebrated attribute was his tireless work ethic – and saying, "I write this to you today as a 41-year-old man who is retiring from the game. I write to you as a man who is completely at peace with himself."

Following the 2003 trade that sent him away from Milwaukee, still one of the franchise’s worst and most hated moves, Allen starred for the Seattle Supersonics, won the 2008 title in Boston as one of the Celtics’ Big Three and then got another ring as a supporting player with LeBron James’ Heat in 2013. In all, Allen appeared in 10 All-Star Games and leaves the game as the NBA’s all-time leader in three-point field goals, with 2,973.

He had a marvelous 18-year career, with many of his biggest accomplishments and most memorable moments coming after he left the Bucks. But he got his start in Milwaukee, first reached stardom here and will be remembered as one of the best players in team history. So this is an ode to Ray Allen and his nearly seven-year tenure with the Bucks, by way of my 15 favorite things about his time in Milwaukee: 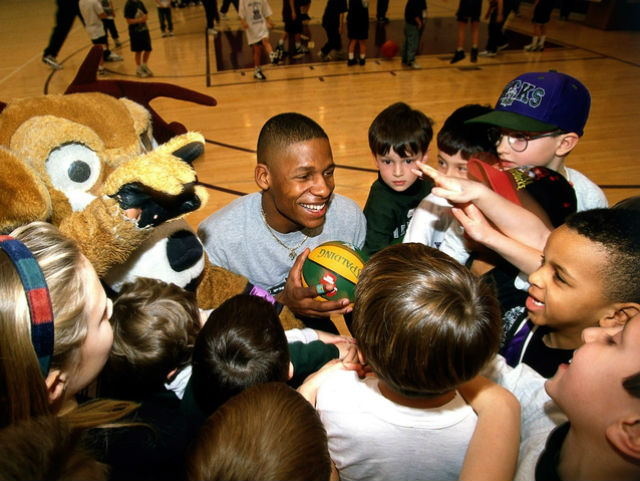 Drafted fifth overall by the Timberwolves in 1996, Allen was immediately traded (along with Andrew Lang) by Minnesota to the Bucks in exchange for No. 4 pick Stephon Marbury. Call  me cynical, but I just don’t see Marbury succeeding in Milwaukee and enjoying the city the way Allen, a comfortable-anywhere military brat, did in the late 90s.

One of my first memories of Ray Allen is from his rookie season in 1996-97, when I was 8 years old. I remember him going up for a wide-open slam dunk and trying to throw it down so ferociously that he actually missed and the ball bounced off the back rim and landed back near midcourt. People forget, because in his later years he became mostly a jump shooter, but young Ray was quite the slasher (actually just a complete player, a prototypical modern shooting guard) and jammed a lot in the early years. On that note …

As a rookie in 1997, Allen participated in the NBA Slam Dunk Contest, which was then and is still now a very good and cool basketball thing. He ultimately finished tied for fifth place in a competition won by another then-rookie guard, the Los Angeles Lakers’ Kobe Bryant. And, hey, future Bucks teammate and my all-time favorite player, Darvin Ham, also was in that contest!

In 1997, Allen averaged 13.4 points per game on 43 percent shooting and was named to the league’s All-Rookie Second Team, along with Bryant. His draft-day trade counterpart, Marbury, made the First Team that year. Perhaps some motivation for the guy who’d go on to make eight more All-Star Teams and win two more titles in his career than Marbury?

In his second NBA season, Allen took a major leap toward stardom, improving his numbers and impact in nearly every category. He upped his scoring average to 19.5 points per game, his assists to 4.3 and his rebounds to 4.9; his PER went from 14.6 to 16.2, his usage percentage increased from 21.4 to 24.3 and his value over replacement player from 1.5 to 3.2. Coaches in every sport always talk about the importance of a player making the second year jump, and Allen’s suggested promising potential.

In 1998, the handsome and charismatic Allen co-starred with Denzel Washington in Spike Lee’s sports drama film "He Got Game." Allen, who’d never acted before, was approached by Lee at halftime of a Bucks-Knicks game after the director was reportedly not impressed by auditions of other NBA stars, including Iverson and Tracy McGrady. After training with an acting coach, Allen played the role of basketball prospect Jesus Shuttlesworth and earned even the acclaim of stodgy film critics, with Roger Ebert writing that Allen "is that rarity, an athlete who can act."

As Jesus Shuttlesworth said, "Basketball is like poetry in motion – cross the guy to the left, take him back to the right, he's fallin' back, then just J right in his face. Then you look at him and say, ‘What?’" Yes, indeed. 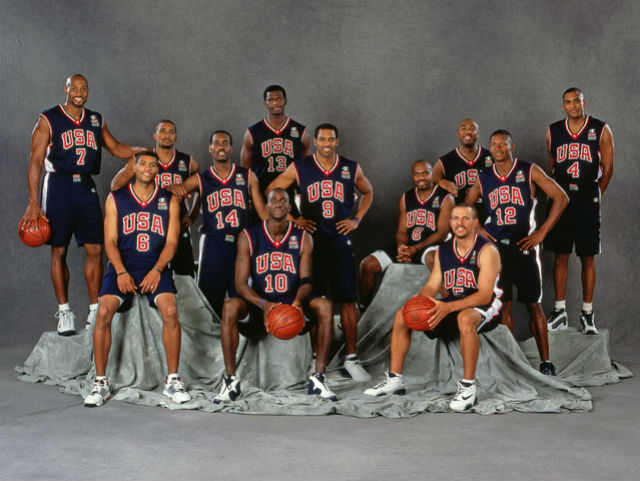 In 2000, Allen was a member of the United States men’s basketball team, which cruised to a gold medal at the Olympics in Sydney, Australia. On a star-studded squad, he played in all eight games and averaged 9.8 points, including a 21-point outburst in the opening game and 13 in the Olympic final.

This was a high watermark season for Milwaukee basketball fans, the Bucks’ best year since the 1980s. With its Big Three of Allen, Glenn Robinson and Sam Cassell, the team went 52-30, captured the Eastern Conference’s Central Division with a league-high 108.8 offensive rating and won two playoff series. During All-Star Weekend in 2001, Allen triumphed in the AT&T Three Point Shootout. The Bucks narrowly missed out on making it to the NBA Finals, losing in seven games to the Philadelphia 76ers.

The 2001 playoff series against the 76ers is one that will be permanently etched into Bucks’ fans minds, ultimately disappointing but insanely exciting along the way. Allen was on another level during those seven games, with the series often seeming to break down to a one-on-one battle between him and Iverson. For the conference finals, Allen averaged 27.1 points per game and shot 50.9 percent on three-pointers.

In a classic and unforgettable Game 6 duel, Iverson scored 46 points on 14-of-33 shooting, but the Bucks won, led by 41 points from Allen, who hit an incredible 9 of 13 three-pointers. The Bucks were defeated in Game 7 and have not since then even made it out of the first round of the postseason.

Those early 2000s Bucks teams, headlined by the likable and athletic Allen, were ineffably exciting. Not since the 70s, with Kareem and Oscar, had Milwaukee professional basketball been as fun and cool and championship-caliber as it was with Allen, Robinson, Cassell, Tim Thomas, George Karl and the rest.

Everyone in the city followed the Bucks, and purple jerseys (and the "Light It Up" song) were wonderfully ubiquitous. That never happens without Allen as the ultra-popular face of the franchise; and only now, with Giannis Antetokounmpo and Jabari Parker leading the current young Bucks, are we starting to feel a similarly positive sentiment. 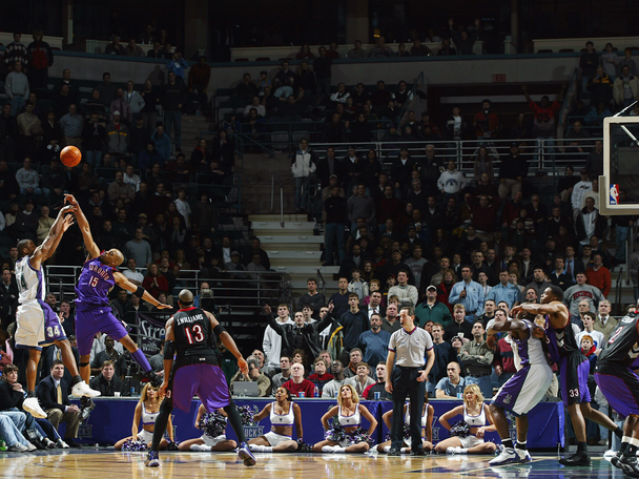 The enduring image of Allen across the NBA is of his fundamentally flawless, gorgeously smooth shooting release, which was first introduced to the league in Milwaukee. There’s really no accurate way to describe one of the purest shots basketball has ever beheld, but when you saw it, you just knew it was good. The ball was always going in.

As affable, clean-cut and mild-mannered as Allen was, especially later in his career, he always had a humble cockiness to him. Whether it was coolly dribbling at the top of the key, soaring in for a big slam dunk or letting go of one of his picture-perfect three pointers and dramatically holding the form as he turned around to run back on defense, Allen was a smooth, poised, grinning and confident baller.

In February of 2003, Milwaukee traded Allen, Ronald "Flip" Murray, Kevin Ollie and a first round draft pick to Seattle for Gary Payton and Desmond Mason. It was a bad decision; arguably the team's worst trade. Allen would lead the Sonics to the Western Conference Semifinals and be named All-NBA Second Team in 2004-05, earn an $80 million contract before the next season and then have a career year in 2006-07. After that, he won two NBA championships with the Celtics and Heat.

Meanwhile, Payton played in the remaining 28 regular-season games in 2003 with the Bucks, who lost in the first round of the playoffs. He was outspoken in his displeasure with being in Milwaukee and left as a free agent immediately after the season. Gary Payton sucks. Desmond Mason was fine. But Ray Allen rocks. Hard to ever get over this one. Let's not talk about it anymore. 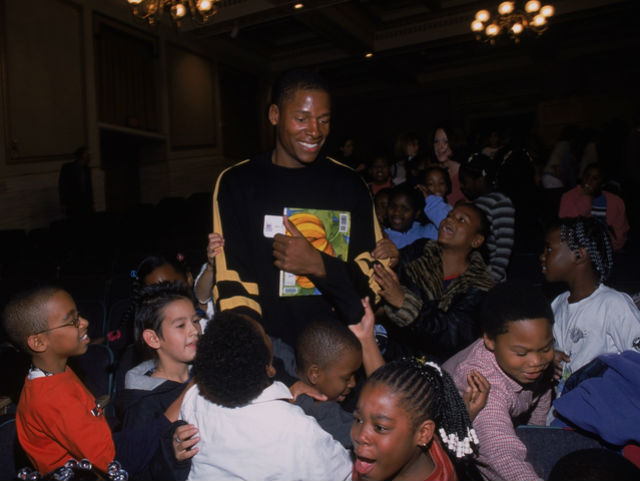 Off the court, Allen was one of the most involved Bucks players in the community. And in terms of the franchise’s all-time leaders, even while playing less than seven seasons in Milwaukee, Allen is still among the best ever. He’s first in three-point field goals made, second in three-point attempts, second in free-throw percentage, fourth in three-point percentage, sixth in points per game average, sixth in minutes played per game, seventh in free throws made, seventh in free throws attempted, eighth in steals, ninth in points scored, ninth in minutes, 10th in field goals made, 10th in field goals attempted and 10th in games played.

As for advanced stats, he’s third in value over replacement player, fifth in player efficiency rating, fifth in offensive win shares, sixth in true shooting percentage, 10th in offensive rating and 10th in usage percentage. He was really, really good; among the top 10 in almost every statistical category, but first in smiles and No. 1 in our hearts.

So thanks for your Bucks years, Ray Allen. It was amazing to watch you play and congratulations on a Hall of Fame career that started right here in Milwaukee.