One of the NBA's slogans is "Where Amazing Happens." But for the Bucks tonight, in one of the most thrilling postseason basketball games in franchise history, it was instead, "Where Amazing Almost Happens." Milwaukee's season ended at the Bradley Center with an agonizing 92-89 loss to Toronto.

One of the NBA’s slogans is "Where Amazing Happens." And yes, certainly, especially in the playoffs.

But for the Bucks on Thursday night, in one of the most thrilling postseason basketball games in recent franchise history, it was, agonizingly, instead, "Where Amazing Almost Happens."

Indeed Milwaukee, which trailed by as many as 25 points with less than five minutes remaining in the third quarter, fought all the way back at the BMO Harris Bradley Center to not only tie, but actually take a two-point lead with three minutes to go in the game, exhilarating an exuberantly incredulous crowd that was raucously trying to will the team to victory – and survival – in Game 6 of its first-round Eastern Conference playoff series against the Raptors.

But Toronto, a veteran-filled and battle-tested bunch that took eventual-champion Cleveland to six games last year in the Eastern Conference Finals, stayed the course and prevailed, 92-89, winning the best-of-seven series and advancing to face those same Cavaliers in the second round.

For the Bucks, it was a rollercoaster of conflicting emotions. They looked lifeless in the first half, then played breathtaking basketball for the last 15 minutes of the game. Their performance was inspiring, the comeback incredible, but that it was necessary was symptomatic of some of the problems that ailed the team in its three straight losses to end the series. Particularly, Milwaukee struggled again at the free throw line, going 18 of 28 (compared to 19 of 23 for Toronto) after making just 26 of 44 (59.1 percent) in the previous two games.

"Both teams played their hearts out there in the second half," head coach Jason Kidd said after the game. "We made a run and gave ourselves an opportunity; we fought. We always talk about the little things, and for us when we look at this, it comes down to just free throws. It’s not that hard, we don’t need to overanalyze this. We got to the stripe, we just couldn’t capitalize on it.

"It was a well-fought series, both teams played as hard as they could and Toronto was the better team."

The best plays from a thrilling Game 6 as the Bucks gave everything against the Raptors!! #FearTheDeer pic.twitter.com/OAdZXi4HzO — Milwaukee Bucks (@Bucks) April 28, 2017

Two years ago, in a Game 6 against the Bulls at the Bradley Center, the Bucks lost by 54 points and Antetokounmpo was ejected for a cheap-shot frustration foul. On Thursday night, Antetokounmpo afterward explained the team’s attitude and approach, given its large deficit.

"You do not want to play the last game of your season and lose by 25, so we were thinking, no, we’ve got to fight through, got to play through it," he said. "They can be up by 25, but we’re going to fight through it, and we did it. We never put down our heads. That was our goal for tonight. No matter what happens, even if we’re up 10, down 20, we’re going to keep fighting, keep playing hard. That’s what we did tonight. Unfortunately, we ended up short."

Nevertheless, Antetokounmpo was marvelous, scoring a game-high and personal playoff-best 34 points. But he was largely a one-man-band, playing an astounding 47 minutes, clearly exhausted in the fourth quarter.

In one of multiple trips to the line in the fourth quarter, Antetokounmpo, who was 7 of 13 on free throws, could hardly catch his breath. As he stood with his hands on his knees, sucking air, the crowd cheered loudly and chanted, "MVP! MVP!"

"I was extremely tired, but I was just motivated by my teammates and the fans, the crowd," Antetokounmpo said. "You’ve got to be tired, it’s the playoffs, and I just was thinking in my mind do whatever it takes to help my team win, so I just battled through it."

After a Jason Terry 3-pointer put the Bucks up 80-78 – their first lead since the first quarter – with 3:06 left, it seemed like their night, and the Raptors, astonished and fatigued, appeared to be beaten.

"For me, whether I’ve made 10 in a row or missed 10 in a row, like I did this series, in big moments I’ve done it my whole career, so I’m never scared," Terry said. "We felt for a second there that we had broken them, and we felt that we had the momentum, but we just didn’t have enough to finish it off."

Raptors reserve guard Cory Joseph scored five points, including a late 3-pointer, during a 9-0 run over the final two minutes, and Toronto held on. DeMar DeRozan, who averaged 23.5 points for the series, scored 32 and hit two clutch free throws with 3.1 seconds to play, then stole Milwaukee’s inbound pass to seal the victory.

The Bucks, who have not won a playoff series since 2001, struggled to shoot the ball for the third game in a row. Milwaukee made just 1 of 9 3-pointers in the first half and finished 7 of 19 from behind the arc. The team shot 42.1 percent from the field, and removing Antetokounmpo’s 13-for-23 performance, it made just 35.8 percent of its shots overall.

Starters Thon Maker, Tony Snell and Malcolm Brogdon were nonfactors – totaling a combined 10 points, six rebounds and five assists, though Maker had five blocks – and ultimately that trio gave way to the lineup that would mount the comeback and play almost the entire last 15 minutes.

Antetokounmpo was aided by Middleton (who finished with 19 points), plus reserves Matthew Dellavedova (12 points), Jason Terry (eight points) and Greg Monroe (six), all of whom were gassed late in the fourth quarter. 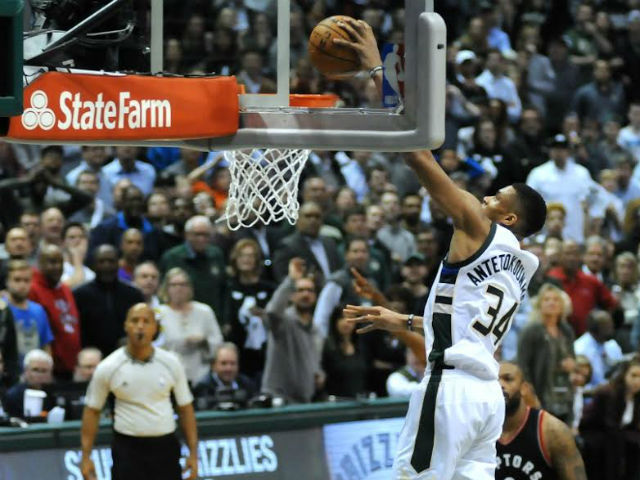 The desperate comeback seemed to enervate the Bucks, especially Antetokounmpo, who missed 4 of 6 shots in the fourth quarter. With 14 seconds remaining and Milwaukee down three points, Antetokounmpo dribbled too long, before finally taking the ball to the basket for an easy dunk that left only three seconds on the clock.

Terry, the 17-season veteran and 39-year-old with an NBA championship ring who was signed largely to provide the Bucks experience and leadership, said he was "very proud of this group of young men" and encapsulated his message to the team and to Antetokounmpo.

"Tonight was epic. We just couldn’t finish it off," Terry said. "But to come back in the fashion we did, to show the fight that we had in us, that’s something to build on. They talked about changing the culture when I came here and I believe we’re headed in the right direction. What a tremendous atmosphere and environment they had in here throughout the playoffs.

"The talk after the game (with Antetokounmpo) was, "See, now, this is how it feels. This is what you should feel like as a superstar in this league every night you step on the floor; you should feel exhausted, because you gave everything you had. And I think for him it’s a learning lesson, but I guarantee you one thing about that young man: it will fuel him.

"It will motivate him as he goes on the rest of his journey and throughout the summer, because times like these you really dig deep and find out who you are, and I think this is just a part of his growth and development."