In spite of it all, here are 9 reasons the Bucks won Game 1

Refusing to relive the same Game 1 outcome against Boston, the Bucks overcame their rust from a week off and managed to pull off an impressive win against the Raptors to open their series. Here are nine notes from Game 1 of the Conference Finals.

Refusing to relive the same Game 1 outcome against the Boston Celtics, the Bucks overcame their rust from a week off and managed to pull off an impressive win against the Toronto Raptors to open the Eastern Conference Finals. The game wasn’t pretty, but despite a poor night shooting and multiple Raptors with 30-point performances, the Bucks were able to get one win closer to the NBA Finals.

We loved how the Bucks kept fighting and how they ended the game to close out the 108-100 win, but what's most comforting is all the things that didn’t go in the Bucks favor and how they were still able to win in spite of it all. If the Bucks’ C-game was good enough to beat the Raptors by eight points, how will things look when the team is firing on all cylinders again?

Here are nine notes from Game 1 of the Conference Finals: 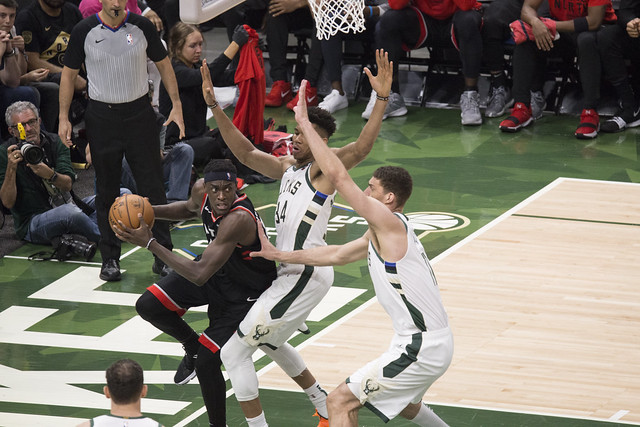 While Bucks fans never lost hope, Game 1 of the Eastern Conference Finals wasn’t the prettiest to watch for most of the game. After the Raptors took a 9-8 lead early in the first quarter, Toronto held onto that lead throughout the majority of the game, leading the Bucks for 37 of 48 minutes (77 percent). Throughout the most of the game, Milwaukee made several runs to cut down the lead, but Toronto always seemed to have an answer and met the Bucks’ runs with scoring runs of their own. If it was a 40-minute game, the bad guys just may have opened the series with a win.

After the Greek Freak scored the first two buckets of the night, Toronto went off on a 16-0 run in the beginning of the first quarter to build a double digit lead to kick off the game. Although Milwaukee had the benefit of being able to inch back for the remaining quarters, typically the team that starts the game with such a huge run is the team that wins. The Bucks did everything in their power to fight back and not let rust get the best of them after their week off.

3. Milwaukee shot under 40 percent … but the Bucks still won 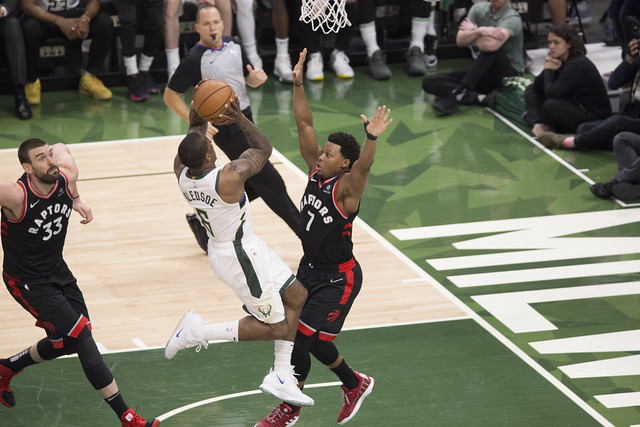 The Bucks had not shot under 40% and won all season – that is, until Wednesday night against Toronto. Despite the Bucks’ dominate defense, the team’s success is contingent on their high shooting percentage. With sharp shooters beyond the arch and an efficient scorer like Giannis, it’s rare that Milwaukee has a bad night shooting. But despite shooting less than 40% on the night, the Bucks still managed to win Game 1.

4. Kawhi Leonard led all scorers … but the Bucks still won 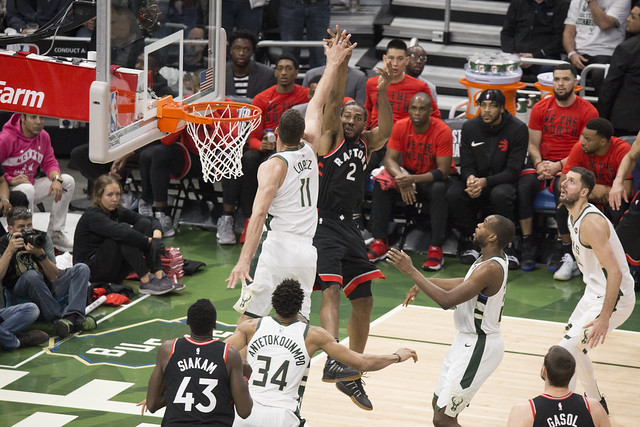 Giannis may be the probable MVP this season, but arguably no player is performing better in the playoffs than Kawhi Leonard. Like Giannis, Kawhi is one of the league’s best two-way players, and he is certainly capable of taking over a game on any given night. While Leonard had 10 more field goal attempts than Giannis, he outscored the Greek Freak by seven points and led all scorers in a losing effort with 31 points. It’s comforting to know for the rest of the series that Kawhi can get his numbers, and the Bucks can still come home with the victory.

5. Kyle Lowry was on fire … but the Bucks still won

Although Kawhi Leonard put up 31 points, what was most surprising is that Kyle Lowry was just one point behind him. Shooting 7/9 from the three-point line, Lowry more than made up for his regular season struggles against Milwaukee. Lowry set personal postseason records on Wednesday night, and some of his makes came at the most clutch times. It’s not especially atypical that Kawhi Leonard would be a game’s leading scorer, but not many would have expected Lowry to outscore Giannis.

Behind Giannis, George Hill may be Milwaukee’s most valuable player in the playoffs this year. The veteran guard adds years of experience to the young roster, and he has put up some major numbers from the bench, at times outperforming the entire bench of opposing teams. You can count on Giannis getting 20-plus a night, but when George Hill is scoring in double digits, the Bucks’ offense can exceed expectations. Unfortunately for Milwaukee, though, Hill regressed on Wednesday by missing all six of his shot attempts. If Hill is just a shell of himself from the first two rounds, and Wednesday was simply an off night, it could be smooth sailing to the finals.

7. Toronto outperformed Milwaukee from beyond the arch … but the Bucks still won 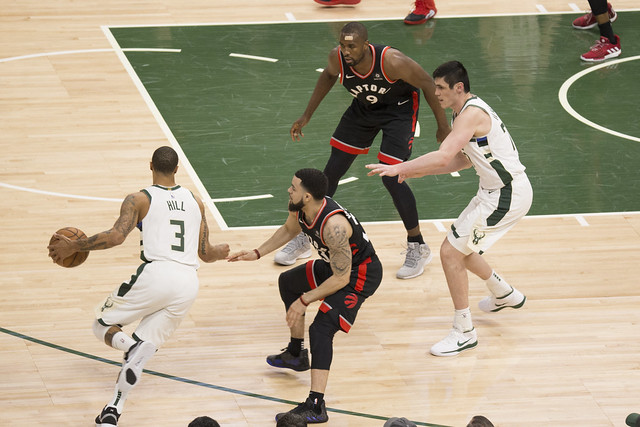 Toronto beat Milwaukee at their own game on Wednesday. No remaining team in the playoffs shoots more three-point shots than the Milwaukee Bucks (only Houston shot more in the regular season), but that strategy didn’t quite pay off during Game 1. The Raptors drained 15 three-pointers compared to Milwaukee’s 11, with two less attempts and at a much higher percentage. Some days you live by the three, you die by the three, and despite shooting 25% from beyond the arch, the Bucks still found a way to come out ahead.

8. Bledsoe and Middleton were 7 for 24 shooting … but the Bucks still won 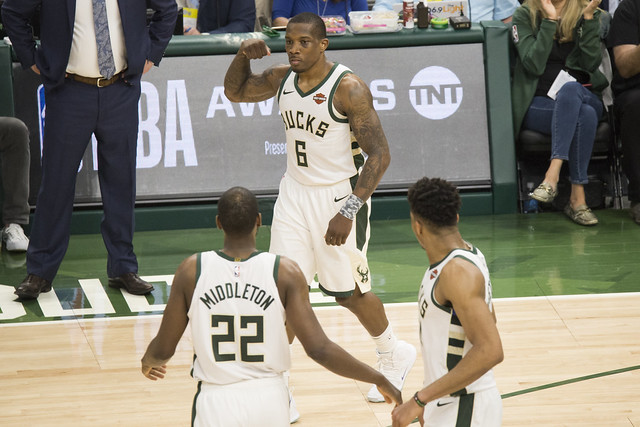 Both Eric Bledsoe and Khris Middleton have had great seasons for Milwaukee, and their good years have carried over into the postseason. However, from an offensive standpoint, neither had their best night against Toronto on Wednesday. The duo combined for just 7 of 24 shooting, which greatly contributed to the team’s lackluster shooting percentage. It’s hard to imagine that either (nonetheless both) will have similar performances for Game 2, which is a good sign for the Bucks going forward.

9. Toronto went into Wednesday’s matchup with all the momentum … but the Bucks still won

What’s maybe most impressive is that Milwaukee was able to win Game 1 when Toronto had all the momentum to open the series. Although the Bucks destroyed the Celtics in five games with four straight wins, the last time Toronto played was in a dramatic Game 7 against the 76ers, where Kawhi Leonard drained one of the biggest shots in NBA history.

While the Bucks benefited from a week of rest, the Raptors had all the confidence in the world from their huge series win. So to lead the majority of the Game 1 of the Conference Finals, only to lose against a team who had one of their worst shooting nights, has to be more than demoralizing. The momentum has certainly swung in the favor of the Milwaukee Bucks going into Friday’s Game 2 matchup.