The Bucks squeaked out a victory on Wednesday night at Fiserv Forum, surviving a meek shooting performance to score the first win of their series with the Toronto Raptors. Friday night, however, the Bucks left no doubt. Let's take a look.

The Bucks squeaked out a victory on Wednesday night at Fiserv Forum, surviving a meek shooting performance to score the first win of their series with the Toronto Raptors.

Friday night, however, the Bucks left no doubt, claiming a 14-point lead at the end of the first quarter and rarely letting it get closer than that for the remainder of the game.

The Bucks now head up north for two games in Toronto, two wins away from clinching its first Finals appearance in decades.

Let's not get ahead of ourselves, however. After all, we have an awesome victory to celebrate. Here are 11 outstanding images from last night's outstanding win over the Raptors.

If those are the same glowing bracelets from last season's foray into the playoffs, those wristbands feel like they're made of solidified bacon fat. They look really cool  though, as Milwaukee put on a show before the real show began.

Incredible to see what Milwaukee has become. From can’t fill up arena to sold out and an overflow of thousands in the nearby Deer District. pic.twitter.com/i3swrE1TPy — Darren Rovell (@darrenrovell) May 18, 2019

AIN'T NOTHING IN THE RULEBOOK THAT SAYS A DOG CAN'T PLAY BASKETBALL!

Just noticed Brook Lopez is wearing a Sonic shirt today. I'm hoping @EvanSusser might be able to confirm rumors Lopez was cast to play the role of Vector The Crocodile in the upcoming 'Sonic The Hedgehog' movie. pic.twitter.com/8QLsyZ9xE4

Somebody ask Brook Lopez about his thoughts on the design of the CGI critter from the upcoming "Sonic the Hedgehog" movie! NOW!

While the nation was captivated by The Brook Lopez Game on Wednesday night, Splash Mountain's brother Robin was avidly watching ... reruns of "The Facts of Life." Is there some sibling rivalry we're unaware of here?! Answer: Very much no, as Robin showed up Friday night to support his brother and hopefully inspire another sweet streak of threes. TV Land must've busted out an "Alf" marathon instead of Mrs. Garrett's girls.

Ersan Ilyasova is feeling it! 15 PTS off the bench for the @Bucks shooter! 🔥#FearTheDeer 52#WeTheNorth 34#NBAPlayoffs on @NBAonTNT pic.twitter.com/jjZMjx1PzT — NBA (@NBA) May 18, 2019

As we all predicted, The Brook Lopez Game on Wednesday night turned into The Ersan Ilyasova Game on Friday, as the key Bucks bench mob piece put in an impressive 17 points and a game-high 22 +/-. The Bucks Twitter tried out the nickname "Turkish Thunder" for Ersan, but the clear choice is "Turkish Delight." Make this happen. 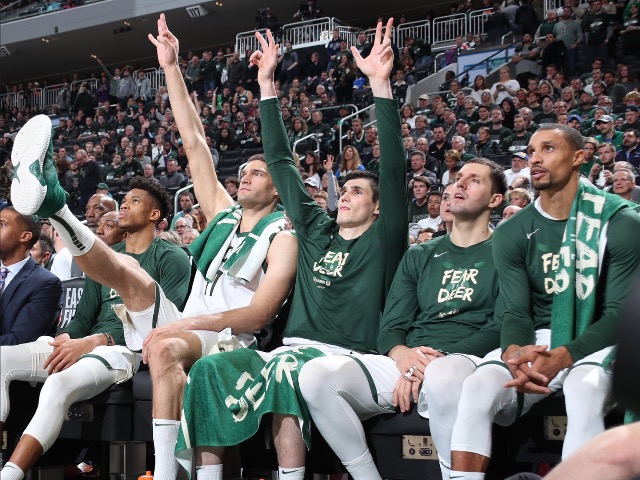 If Bucks GM Jon Horst isn't considered the front runner for Executive of the Year, then don't even give out the trophy. The Bucks' devastating depth, especially those pictured above, have made Giannis and company a crushing Finals contender. They stole Brook Lopez from the Los Angeles Lakers (hey, gotta make room for JaVale McGee!), snatched depth from the Sixers by picking up Ersan Ilyasova, added veteran leadership and more with George Hill (all while dumping bad contracts), and posted another sharpshooter on the perimeter with Nikola Mirotic.

Put an out-of-this-world talent like Giannis in the middle of that, and you've got a pretty much perfectly assembled team – that's only six wins away from an incredible Milwaukee moment.

Oh, by the way, Giannis still had a great game. The official MVP finalist netted another double-double with 30 points and 17 rebounds plus five assists and two blocks. The beauty of the Bucks is that you have to pick your poison with this team's depth – and yet Giannis will still kill you in the end.

Not quite the full mean mug. That's a mild mug. When you're up by 13 points for just about the entire game, you don't need the full Greek grimace. The scoreboard is already mean enough.

10. The biggest victory of all