On Tuesday, the Milwaukee Common Council gave final approval to the designs for the new Bucks arena, as well as its parking structure and the team's training facility - the last remaining municipal step before real construction could begin on the project.

Next up for the Bucks and their new arena? Breaking ground on Saturday, June 18.

On Tuesday, the city gave final approval to the designs for the new Bucks arena, as well as its parking structure and the team’s training facility – the last remaining municipal step before real construction could begin on the Downtown project.

The Milwaukee Common Council unanimously endorsed the arena and training facility, 15-0, and voted, 14-1, to approve the parking structure. The only member opposing the parking structure design was Ald. Nik Kovac, who voted against it – as he had in a Zoning, Neighborhoods and Development Committee meeting last week – because the plans didn’t contain specifics about future apartments the Bucks say will be included in the building. The parking structure’s general plan, comprising the apartments, was approved by the Council five months ago.

After the Common Council’s approval of the new arena design and zoning, Bucks president Peter Feigin – the point man for the project on the team’s side – released a statement.

"Today’s vote represents another significant milestone in this historic public/private partnership to transform downtown Milwaukee," Feigin said. "Now that we’ve cleared this final hurdle, we can truly get to work on creating jobs, driving economic growth, and building a world-class sports and entertainment district that will be a lasting symbol for the region. We look forward to welcoming fans from around the state on June 18 as we officially break ground on the arena and celebrate our collective efforts to build a better Milwaukee."

After the Zoning, Neighborhoods and Development Committee moved the arena design plans forward last week in a meeting, it was expected that the full Council would also approve them.

The arena, to be constructed just north of the BMO Harris Bradley Center, is expected to be completed in a little more than two years, ready for the start of the 2018-19 NBA season. It is projected to cost $524 million, with $250 million in public financing. The $30 million training center, which is being paid for entirely by the Bucks, will be built west of North 6th Street and north of West Juneau Avenue. 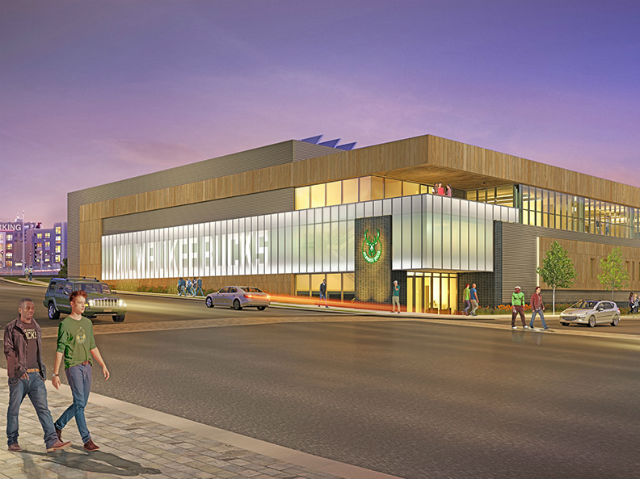 The 1,240-space parking garage, estimated at around $35 million, will sit just north of the current Bradley Center, east of North 6th Street between West Juneau Avenue and West McKinley Boulevard, and will connect to the new arena via skywalk.

The training center and parking structure are slated to be completed before the arena, with the former possibly finished in the fall of 2017.

The Bucks plan to put shovels in the dirt at a groundbreaking event on Saturday, June 18 during the second annual Bucks Summer Block Party, which is open to the public.