After Sudan, Australia and Canada, Thon Maker eager to say "I'm from Milwaukee"

For reasons first of survival and later opportunity, Thon Maker has been all over the world. In his 19 years on earth, the Bucks' first-round draft pick has already seen much of the planet. Now he's eager to see more of Milwaukee and call his new city home.

For reasons first of survival and later opportunity, Thon Maker has been all over the world.

Born in battle-ravaged South Sudan, he fled that country’s Civil War at the age of 6 with some family members into neighboring Uganda, where they stayed for a year before being accepted as refugees by Australia.

After a half-dozen years in Perth and then Sydney – and uncovering his extraordinary talent for basketball – Maker moved to the United States, where he lived briefly in Texas before attending schools and dominating on the court in Louisiana and then Virginia.

In 2014, he and his brother relocated to Ontario, Canada, where Maker enrolled at the Athlete Institute to accelerate his development and showcase the natural ability that so piqued professional scouts’ interest.

On Thursday night, Maker’s long, winding, globe-trotting journey and inspiring, adversity-conquering efforts culminated in his being selected by the Bucks with the 10th overall pick in the NBA Draft, a dream come true for the well-traveled 7-footer.

In his 19 years on earth, Maker has already seen much of the planet. Now, he says, he’s eager to see more of Milwaukee and call his new city home.

"Getting the opportunity to say I’m from Milwaukee and this is where I live," Maker says, "I’m excited to find out what Milwaukee has to offer and how I can represent it in a professional way."

Not all of his fellow NBA Draft prospects shared that agreeable opinion of Brew City. A few players he spoke with during workouts "didn’t say good things about Milwaukee," Maker notes.

"A lot of people talked about Milwaukee in a negative way; I never paid attention to them," he says. "I said, ‘Let me find out for myself.’ I went downtown and saw how beautiful it is."

So the American peer pressure didn’t get to the worldly, wiry teenager at all?

"Me, I just ignored all of that until I got here and got to experience it myself and see the whole situation and how it is all laid out and what it could feel like if I were here," he says.

Maker had been to Milwaukee before, having come through on the AAU circuit. But he says he was able to more fully experience the city after his June 15 Bucks workout – when, in a car on the way to dinner, general manager John Hammond "fell in love" with the hardworking, high-character Maker.

"I went through that process and enjoyed myself," he says of his short tour, which included seeing Downtown for the first time. "I got a chance to do that at my workout and I really, really enjoyed the city."

Maker said before the draft that he planned to live within a 5-10 minute walk of the facility for whatever team selected him. The Bucks currently practice at the Cousins Center in St. Francis but are scheduled to move into a new training center Downtown next fall, which will allow Maker to see more of the city he already seems to like so much.

But Maker wasn’t the only draft pick to express excitement about his new hometown. 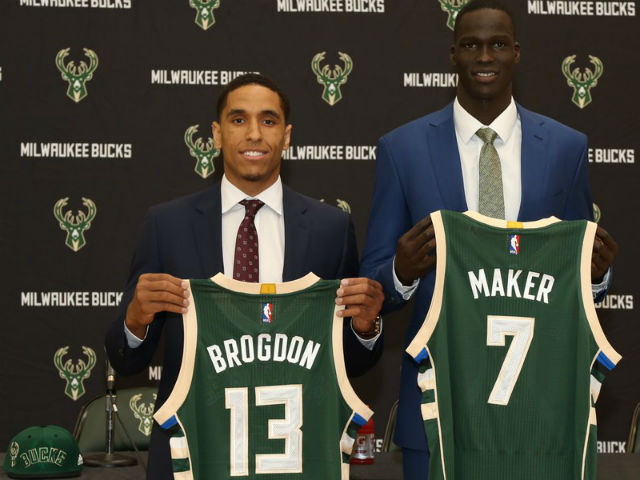 For his part, second-rounder Malcolm Brogdon, whose Bucks workout was canceled and who'd only previously passed through General Mitchell Airport, says he appreciates the city’s reputation.

"It seems like a hardworking town, people work hard, and I think I fit in," says Brogdon, 23, whose college coach at Virginia, Tony Bennett, is a Wisconsin native. "I want to work. I love the water, I love the town."

For a city still battling its own inferiority complex, and a Bucks team trying to convince it to fully buy in, Milwaukee sure seems to have found a couple of admirable ambassadors.