Larry Sanders has been in Milwaukee for three years, but this is the first in which he's seen significant time - and the result has been an award-worthy breakout season. To help him out, the Bucks rolled out a promotional campaign featuring Larry Blocks and a complimentary website.

How long is it supposed to take for someone to become a Milwaukee icon, because whatever record is, Milwaukee Bucks center Larry Sanders is going to smash it.

For two seasons, Sanders was this tall, rangy, powder keg of potential. He averaged only 13.5 minutes per game, but his 36-minute averages of 10.6 points, 8 rebounds and 3.5 blocks hinted at some brilliance.

Then, this season happened.

There were the 10 blocks against Minnesota. There are the 26 double-doubles. There were the unintentionally(?) hilarious ejections.

There is the now-signature salute to the dearly departed ball swatted out of play. And, of course, there are the power dunks off lobs and shovel passes, and the ensuing ohsoclosetoatechnical swing on the rim that ignites the BMO Harris Bradley Center crowd like no other.

On social media there was a quest to find him a suitable nickname (it seems like Colonel is used most), and he’s now known as LARRY SANDERS!, a style change that is beginning to trump the Associated Press’ preferred constitution (see this Grantland screencap). 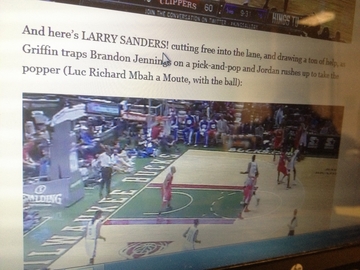 Now, he has his own website – LarryBlocks.com – to coincide with the Bucks’ campaign to earn SANDERS! votes for NBA Defensive Player of the Year and Most Improved Player.

Part of this fun campaign was sending a custom set of Larry Blocks to various media around the country in an effort to educate them on the season SANDERS! has had. The Bucks’ public relations staff developed the concept, and the marketing and interactive departments got involved as well.

Bucks graphic designer Luis Trinh Nava designed the box and also assisted with some of the features on the website.

"That’s wonderful," SANDERS! said. "They sat there and put those blocks together. Just the effort they put into it was amazing. I’m really grateful for the organization for doing that for me."

There’s no better player to center this type of campaign around, either. SANDERS! is fun-loving, crowd-pleasing, quick with a smile and possesses a sense of humor – all while keeping his humility.

He knows one of the reasons the Bucks have been able to build this campaign around him these last two weeks of the regular season is because the team has clinched a playoff spot.

"That’s where the focus is," he said. "Keep the focus on winning games, trying to be successful as a team and all the individual accolades will fall into place."

It will be awhile before the NBA announces any of its regular-season awards, and SANDERS! may or may not win either of the two the Bucks are pushing him for. It doesn’t really matter, though – he’s already cemented the foundation of icon status in the hearts of Bucks fans.