Are the Bucks headed in the right direction?

The Milwaukee Bucks are now officially in the second half of the 2014-15 season, having completed 44 of their 82-game schedule. Currently, they are an Eastern Conference playoff team. Are they overachieving? Are young players arriving early? Or, might an "accidental" playoff berth set the franchise back in its quest to acquire a difference maker?

We’re 27 days into January of 2015, and nothing (even the Green Bay Packers’ still-stunning loss in the NFC Championship game last week) in the major sports world in this state is more surprising, more "new" than this edition of the Milwaukee Bucks.

On this date in 2014, the Bucks were 8-35 and were two games into a new, six-game losing streak. This after they already had banked losing skids of five, nine and 11 games. They couldn’t score (around 92 points per game) and they couldn’t defend (giving up just over 100).

We all remember that Larry Drew’s squad won only seven more times in 2014, en route to the draft lottery and the No. 2 pick that secured Jabari Parker.

Jason Kidd’s bunch is 22-22, currently the sixth playoff seed in the Eastern Conference, four games clear of No. 9 Brooklyn.

They’re doing this without Parker, who blew a knee after just 25 games.

They’re doing this without Larry Sanders, who left the team on Dec. 23 for personal reasons and has since been suspended by the league for violating its substance abuse policy.

The roster has turned over a bit with the dismissal of Nate Wolters and the addition of Kenyon Martin, and there has been some injury volatility with Ersan Ilyasova, Johnny O’Bryant and John Henson missing time.

But what does this mean, outside of the fact that Kidd and his staff can really coach?

Let’s tackle a couple of the key topcis:

The playoffs and the "core" 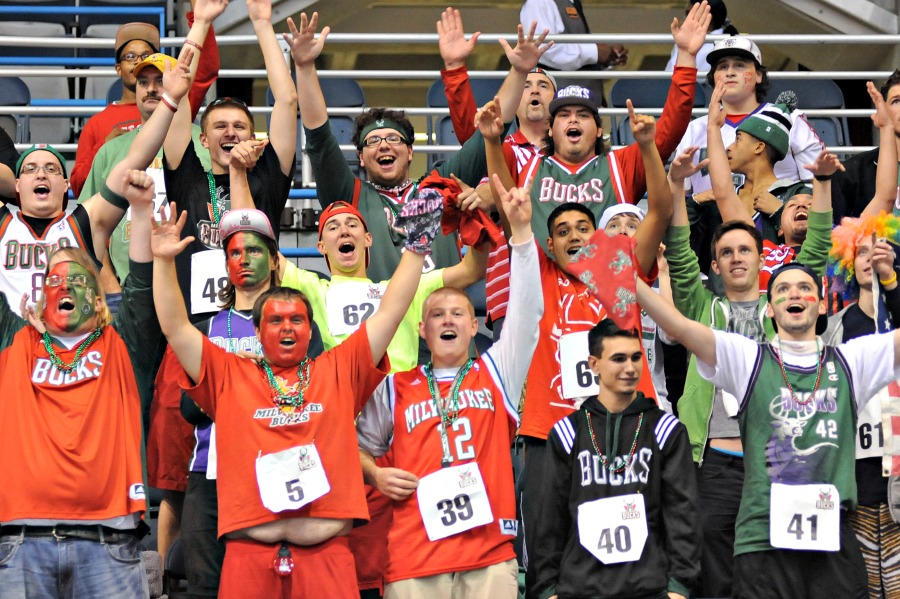 This team is solidly mired in the bottom half of the Eastern Conference playoff race, which is exactly the place no one wants to be, and where the Bucks existed for the better part of two decades.

This year has a different feel in that this would be an accidental playoff berth akin to last year’s accidental trip to the lottery. At the beginning of this year, no one felt this would be a team that was going to make the playoffs. So, if they do, is that a good thing?

Well, they won’t win a championship, and they will lose in the first round. Maybe they’ll win a game, but that’s it. What does that get you? Only more questions.

Does it mean the "young core" is arriving earlier than expected?

Does the experience of meaningful basketball for Giannis Antetokounmpo and Brandon Knight down the stretch, along with those four or five playoff games, mean more than an additional lottery pick?

Get your game day gear now!

Depends who you ask.

If you’re picking between 10 and 15, maybe it is better for Antetokounmpo and Knight to play those games than picking a player that you hope, someday, might be a rotational player. Maybe.

And the "core" isn’t really arriving ahead of schedule. Two key pieces of that group – at least the part you counted on at the beginning of the year – aren't contributing to this.

The year is a wash for Parker, who hopes to return from a torn anterior cruciate ligament next year with no issues. And say what you want about Sanders, but this would have a different feel if the 26-year-old center was playing every game and averaging 10 points, 10 rebounds and three blocks with Zaza Pachulia coming off the bench.

Now, Knight and Antetokounmpo and 23-year-old Khris Middleton are leading the team in minutes played, but the Bucks have yet to determine if Knight and Middleton are really part of the "core." Neither were extended at the October deadline and will enter restricted free agency.

What is their value? Is Knight the $44 million point guard? Is Middleton worth a 4-year deal? If those players walk away this summer, clearly they weren’t part of the championship vision. Obviously, time will tell on that end.

That said, the fact that Knight, Middleton and Antetokounmpo are three of the team’s leading scorers helps the feeling that this Bucks team isn’t in "basketball hell" like previous incarnations of the franchise, the teams that middled about .500 with no hopes of winning a title but just good enough to stay out of the lottery.

I also don’t believe you’ll see younger player like Middleton traded for some veteran to help the team push to 46 wins and the five seed. So that’s different, too.

But, to get out of basketball hell you need superstars, multiple all-stars. The only real (proven) way to do that is to either draft them all, or have an established group collude to join together.

Obviously neither are happening in Milwaukee this summer.

I believe Parker will be an all-star. The jury is still out on Knight and Anteokounmpo, for as highlight-worthy as they can be. So … 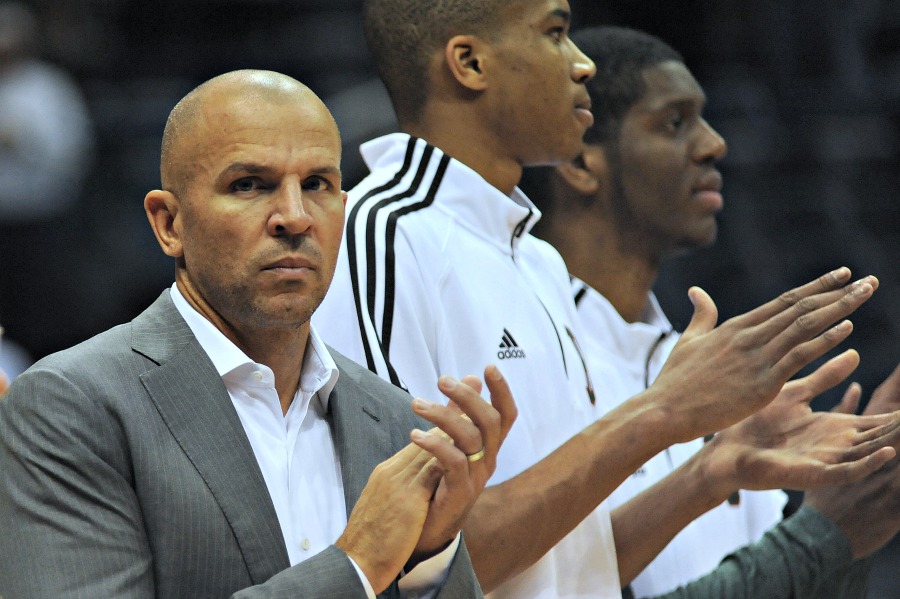 Every player on the Bucks wants to make the playoffs. So does the head coach. They play that way every night. Yet they’re just .500, with all that effort. But, they’re not en route to 15 wins.

The word "culture" was tossed around nearly ad nauseam in the preseason, and I do believe it’s a real thing. I’ve seen it up close. You need winning players, and players who believe in winning. So, why not instill that as early as possible?

Even if I can run down this roster and say only a couple might be here if the Bucks reach an NBA Finals in four years, why not create an atmosphere that has an expectation of winning games?

That is important to this new ownership and the head coach, and perhaps more importantly, it matters to Antetokounmpo.

"On the court, we’ve tried to change things," Antetokounmpo said. "We’ve changed things to try and get better. I see all the guys. Last year, none of the guys were staying after practice and working. Now, after practice, you can still see guys working. When I’m going to come back, I’m going to see guy still coming back and working. It’s nice being on this team, man, it’s nice to see the guys competing and practicing hard and playing hard."
Which brings us to the last part of this, which is … 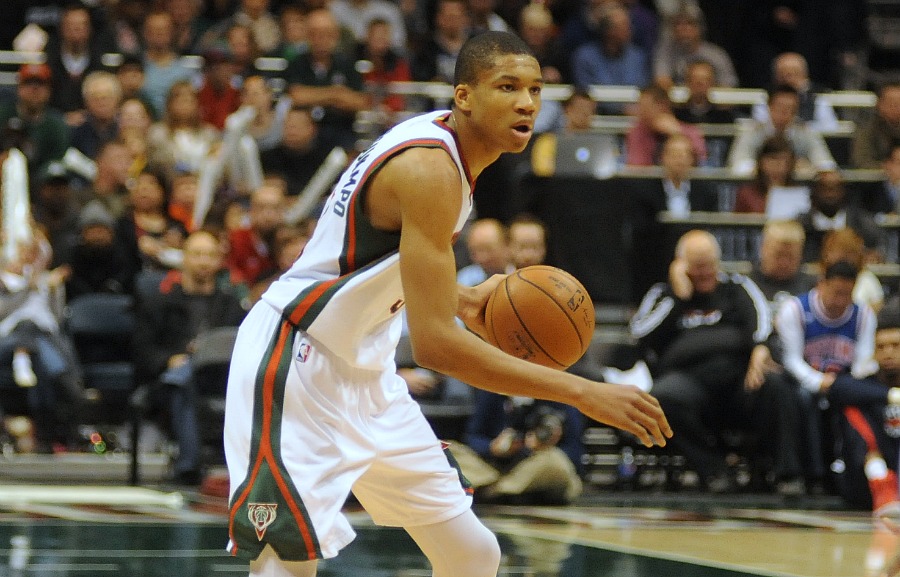 He’s the wildcard this whole project, and really the only player worth focusing on nightly if you’re a fan looking forward to the future of the franchise (mainly because Knight’s future here, to this point, is TBD).

And, with the way the 20-year-old is progressing, the team is encouraged the ball may have enough carry to fly over 440 feet.

The thought is that hey, maybe we got our additional top 5 lottery pick in 2013 at No. 15 overall.

It’s happened before, even though it’s rare. Very rare.

But, when it comes to Antetokounmpo, a colleague brought up Jermaine O’Neal as possible comparison for the desired career trajectory.

O’Neal didn’t become a full-time starter until his fifth year, at the age of 22, in Indiana. He started 80 games and averaged 32.6 minutes per game.

And, O’Neal was the best player on those teams, though through the years he had Hall of Famer Reggie Miller (albeit on the decline) to lean on as well as other quality players around him like Jalen Rose and Al Harrington and fellow All-Stars in Brad Miller and Metta World Peace.

Can Antetokounmpo reach that level? It is the great mystery that may determine the future of this franchise, honestly.

But, Kidd and the Bucks are taking their time in finding out.

Antetokounmpo is playing more this year than last, but he’s averaging just 28.3 minutes per game, which ties him with Mo Williams for 99th in the NBA in that category. (The top end of the spectrum is Jimmy Butler in Chicago, at 39.5 minutes.)

What he has, that you can’t teach, is that "killer instinct" on the court, a deep hatred of losing and a work ethic that is important to have in a star player. The only question is if Antetokounmpo truly has the physical talent to manifest those intangibles into the type of player who makes $18 million a year and wins you games.

Unless more injuries strike the team or players are traded, it’s unlikely Antetokounmpo will see more minutes. But, if he can cut down on some turnovers, continue to rebound and knock down a few more jumpers (he’s shooting just 25.9 percent from 10 to 15 feet), it’s another positive step in his development that you can actually track from game to game.

Of course, unless you’re contending for a conference finals berth, or a championship, every team has a multitude of questions. The Bucks are no different. And while it is true that despite the fact this is perfectly mediocre team at this point – they are 22-22 after all – there is a different air to this team than other run-of-the-mill Bucks squads, and they definitely can get you excited at times, even if the end result isn’t going to be a deep postseason run.

Perhaps what is most exciting is that we’re not quite sure where they’re at, even 44 games in, and the questions that exist are interesting enough to keep you watching for answers.