The latest chess move in the ever-escalating Bud Light/Miller Lite war has taken a dark turn, as Anheuser-Busch released a new advertisement over the weekend accusing MillerCoors of brewing its signature lager with people as a featured ingredient.

The latest chess move in the ever-escalating Bud Light/Miller Lite corn syrup war has taken a dark turn, as Anheuser-Busch released a new advertisement over the weekend accusing MillerCoors of brewing its signature lager with people as a featured ingredient.

The ad, which made its premiere during the Sweet Sixteen and Elite Eight games over the weekend, features a CGI version of Oscar-winning actor Charlton Heston reenacting his famous scene from the end of his 1973 film "Soylent Green," shouting and raving on a street that "You gotta tell them! Miller Lite is people!" while MillerCoors employees pull him away from the crowd on a stretcher.

The commercial then cuts to its now-typical bright blue screen with a foamy glass of Bud Light joined by white print saying clearly, "Bud Light: Brewed with no people." 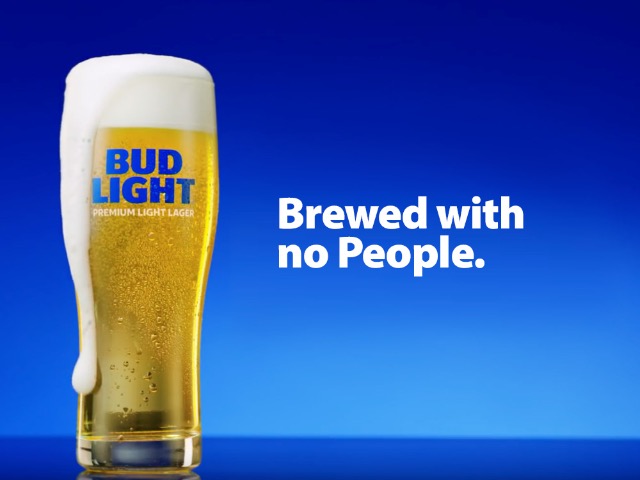 The ad drew immediate blowback from MillerCoors, media watchdogs and literally every person outside of the St. Louis area, with many going onto social media to call the commercial "#FakeBrews."

"Obviously it's wildly untrue," noted MillerCoors CEO Gavin Hattersley. "I'd call it slander or libel, but frankly we don't have words for how outrageous the idea is that we brew our beer with human beings as an active ingredient.

"Also: Are we just not going to talk about the fact that Bud Light brought Charlton Heston back from the dead? Because that's weird, right?"

Bud Light officials had no comment, other than to say that the ad speaks for itself and also, "Dilly dilly." Multiple sources confided to OnMilwaukee, however, that the famed beer has similar advertisements in the campaign prepared for release in the upcoming weeks, including a TV ad that claims Miller Lite contains fluoride so the government can control your mind, another commercial claiming Miller Lite was spotted on the grassy knoll and, for its big National Championship ad buy, a 60-second spot laying out why Miller Lite is the Zodiac killer.

"Well, that escalated quickly," Hattersley added, before saying that the Miller Lite ad campaign will continue to focus on matters of taste and reality, and that an additional law suit against Anheuser-Busch would be a "no duh."

Milwaukeeans obviously had strong feelings about the ads attacking their local macro blasted over their televisions during the big NCAA tournament games this past weekend.

"We're here to watch young men put their bodies on the line and play for our entertainment for literally no pay; how dare Bud Light get in the way of that innocent fun?" ranted New Berlin resident Erwin Stoalgatz while drinking from a 40 ounce-bottle of Miller Lite (and also stealing sips from a Henry's Hard Seltzer when he thought no one was looking).

"When this started, I poured my Bud Light down the drain, but now that seems too dignified," said Puddler's Hall owner Casey Foltz. In response to the latest attack, Foltz said that he redid the entire bar's plumbing system so that the water in the toilets and urinals would be Bud Light.

"The customers haven't noticed the difference," he added.

And do Bud Light's new claims hold any water?

"That's preposterous," Foltz proclaimed, "and if it is true, well, I guess I like drinking people then. In for a penny, in for a pound! Plus, if they're putting people into Miller Lite, then what the heck is going into IPAs and sour beers?"

BeerFest will raise funds for The Leukemia & Lymphoma Society