Unlike the last show, where I really wasn't sure what to expect, this time I was expecting a lay-it-all-out kind of show from Buffalo Gospel. They didn't disappoint Friday night at Anodyne Coffee Roasting Company.

"Thank you guys for coming out! I know it’s a busy time of year. We really appreciate you coming out and carving a little slice of it out for us," said Buffalo Gospel lead singer Ryan Necci, pausing to express the band's thanks to the audience at Anodyne Coffee Roasting Company on Friday night.

It’s only been a little over a month since I last saw Buffalo Gospel open for Deslondes. At that point, I knew three things: that I’d be a lifelong fan, that I’d be hitting their headlining show Dec. 22 and that this is a band that will probably lay it all on the table every time they play.

So unlike the last show where I really wasn’t sure what to expect, this time I was expecting a lay-it-all-out kind of show from Buffalo Gospel. They didn’t disappoint. And spoiler alert: If you left before the encore (or you talked through it – and you know who you are), you definitely lost out.

Nickel&Rose – a local folk band with all kinds of infusion elements like jazz, blues and country – provided the perfect lead-in for Buffalo Gospel’s progressively traditional country. The band’s 11-song set featured dreamy female and bluesy male lead vocals with sweet harmonies. My favorite song had to be "My Old Man." It’s one of their older songs with a blues feel and an up-tempo rhythm.

Buffalo Gospel wasted no time taking the stage after Nickel&Rose finished their set. Necci took the stage solo with a laid-bare opening of "Mule." At that point, I was wondering whether opening with such a melancholy song was a wise choice. As the song progressed, though, Ryan was joined on stage first by Kevin Rowe on upright bass and then the other three members of the band: Nick Lang (percussion), Michael Rossetto (guitar and banjo) and Andrew Koenig (electric and acoustic guitars). The song built up in intensity until it exploded into the chorus – "You never know that a little love is all you need until a little love is all you got" – with the crowd singing along. 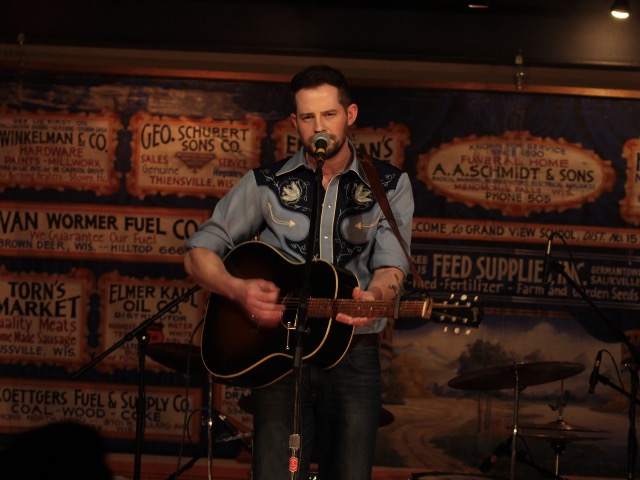 Different than the last show, Buffalo Gospel got to show more personality. They weren’t rushing through their set because this time they were the set to see. Putting together a great mix of their old songs and songs from their forthcoming album, the boys were looser, playing off each other and definitely making it look fun.

They seemingly flew through their first six songs including "When Lonesome Comes Calling," a beautiful, new ballad.

Stylistically, Buffalo Gospel went a little more to the acoustic side on a few of their older songs like "Hoarse as a Crow" and "Hill Outside My Home." Can’t say that I’d complain … at all. The music is so lyrically bound that pushing out hard would hurt the song.

And then, out of nowhere, after serenading us with that sweet song "Hoarse as a Crow," the boys threw down with the Dwight Yoakam cover "Guitars, Cadillacs"! For real? Where did that come from? You can insert the audience going wild and dancing here (actually, they did that more than once; it was just such a good show).

After a few more songs, it seemed that Buffalo Gospel was ready to close up shop with a bang by once again getting the audience, and the band members themselves, to dance and stomp to the rowdy "Son of a Gun." It was so insanely crazy that Ryan Necci got up on the kick drum, balancing on one foot facing the wall, and then somehow, while still blasting out the song, turned himself around and stood on the drum facing the crowd. In my head, I’m hearing someone yell, "And the crowd goes wild!" because they did.

After leaving the stage on that wild note, Buffalo Gospel had one more trick up its sleeve. Returning for a two-song encore, the guys grabbed their instruments, literally unplugged everything and went down on the floor to sing. No microphones. No amplifiers. Just raw talent.

The crowd circled around them as Necci began singing "The Northern." People that couldn’t hear shushed those still raucously talking like the band was still playing through the speakers until Anodyne was nearly silent except for Buffalo Gospel. It was just incredible.

They did "Letters to Georgia" the same way. And then it was over. Once again, way too soon.

After hearing some of their new songs live for the second time, I honestly can’t wait for their new album to drop on May 4. Anodyne is hosting an album release party the following day. Mark your calendars. It shouldn’t be missed.

"Mule"
"18 Wheeler"
"High Time to Hang Fire"
"Hard Labor Side of Gettin’ on Homeless"
"When Lonesome Comes Calling"
"Old I Do of Mine"
"Hill Outside My Home"
"Hoarse as a Crow"
"Guitars, Cadillacs" (Dwight Yoakam cover)
"If I Was the Last Man"
"The Western"
"Lonestar"
"Son of a Gun"

Encore
"The Northern"
"Letters to Georgia"