The wait for Bumstead Provisions, Bay View's newest multi-functional bar, restaurant, deli and grocer, is nearly over. The owners have announced an opening date and are looking for qualified personnel to assist in the execution of their unique concept.

The wait for Bumstead Provisions, Bay View’s newest multi-functional bar, restaurant, deli and grocer, is nearly over. According to co-owner Mike Bodow, Bumstead will officially open its doors at 2671-75 S. Kinnickinnic Ave. on Monday, Sept. 19.

The concept, which includes a full service deli and grocer, along with a bar and restaurant, will offer up inventive new dishes and beverages, as well as and high end grocery and deli items like meats, cheeses, seafood, foraged mushrooms and other hard-to-find items, along with a curated selection of craft beers and wines.

Thus far, we've traced the progress of the unique venue closely, from the announcement of its launch in spring of 2015, through the development of the concept and its construction, which moved forward significantly this summer. And we can't wait to get a look at the final interior, which promises to be as remarkable as the concept itself.

"It's been a long year full of sleepless nights, but we knew if we kept fighting we would make the dream of opening in Bay View happen," notes Bodow. "We're basically beside ourselves knowing that it's about to come true, and we can't wait to meet the community."

The venue, which will inhabit two spaces – one which housed ReThreads and another which was home to Strehlow's True Value Hardware – will blend modern convenience with the historic look and feel of the space, the assets of which include a moving library ladder and hardware storage compartments and a beautiful punched metal ceiling.

Tabletops made from cabinet doors from the old hardware store will add interest to the space, while original shelving units and brick walls will hearken back to the inhabitants of yore. 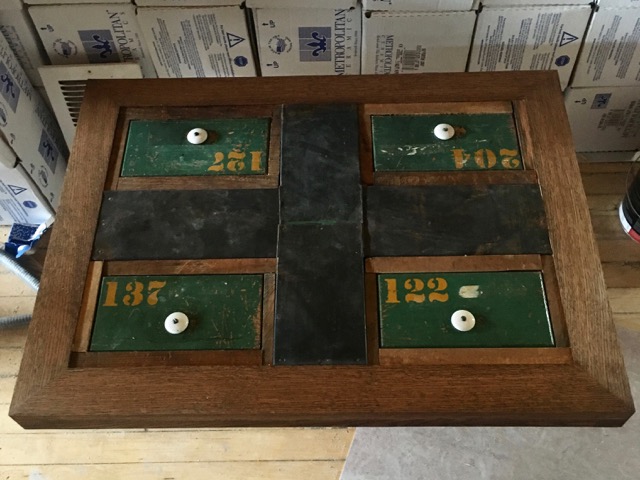 Watch OnMilwaukee for additional details, including a peek at some of the inventive items on the Bumstead menu.