I was a little disappointed the first time I stepped into Henry Koch's 1870 Calvary Presbyterian Church - that soaring red building on 10th and Wisconsin. The sanctuary has been completed remodeled and modernized. The pews are gone, replaced by stacks of movable chairs. The wooden chancel isn't ornately adorned as one might expect in a 150-year-old church, and the new hardwood floors gleam rather than creak with accumulated history. But, then, Pastor Mark McDonough converted me.

I admit it, I was a little disappointed the first time I stepped into Henry Koch’s 1870 Calvary Presbyterian Church, 935 W. Wisconsin Ave. – you know the one: that soaring red building on 10th and Wisconsin with the steeple so tall is appears to reach right up to the heavens.

The sanctuary has been completed remodeled and modernized. The pews are gone, replaced by stacks of movable chairs. The wooden chancel isn’t ornately adorned as one might expect in a 150-year-old church, and the new hardwood floors gleam rather than creak with accumulated history.

But, then, Pastor Mark McDonough converted me. 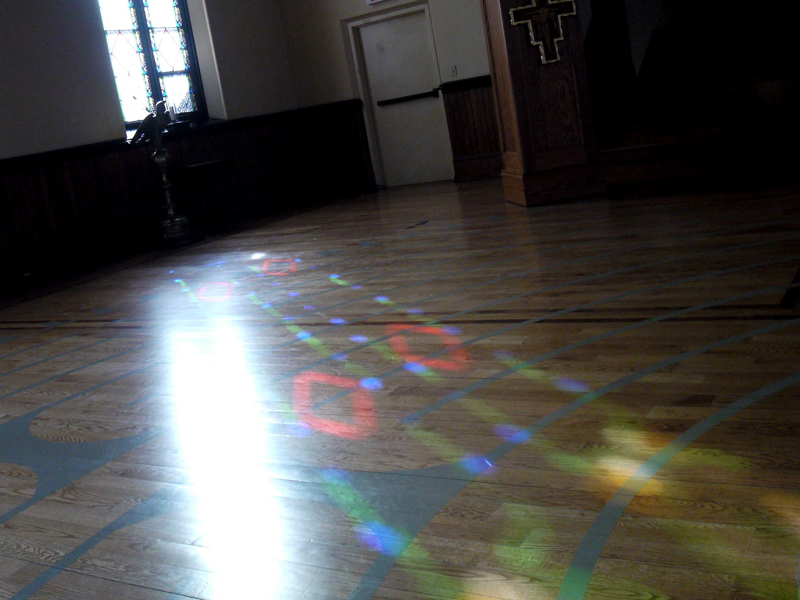 Like many churches in the center of the city, maintaining a vibrant congregation has proved difficult for Calvary over the years, says McDonough.

"The story of this church is really the story of Milwaukee," he says. "It’s always been migrant church – meetings of people coming through, moving in, getting settled. They worked for the hospitals (nearby), they worked in the (Menomonee) Valley. Then as the suburbs grew, people moved out and then you had the race riots, you had Jeffrey Dahmer, you had Marquette talking about moving or being asked to move at one point."

The result is that the congregation barely existed anymore. McDonough says at the lowest ebb, it consisted of eight people. Eight people.

And so changes were made. Most obvious is the appearance of the sanctuary. The pews were removed, the chancel was removed, the floor was replaced and a calming labyrinth was painted in the center. A sweeping, tent-like canopy of fabric now covers the area where the service takes place, in front of, not on, the altar – bringing the service right down to the worshippers.

But, the change was also one of swinging open the doors to the church, a welcoming spirit that is reflected in the church’s mission:

To embrace and affirm all who come through our doors as brothers and sisters created in the image of God;
To love through compassionate service, innovative worship, nurturing education and scandalous hospitality;
To be a sanctuary for all who need, all who want, all who question, all who seek;
To lead in the work for justice and equality, to bind ourselves in solidarity with those who suffer, to be a sign of Christ’s love in the world;
To preserve this historic landmark building that serves as our wider community’s gathering place for celebration, discussion, reflection and the performing arts.

That scandalous hospitality means that the church welcomes all. In addition to hosting weddings and other events, Calvary is home to the In Tandem Theatre company, to dance and arts groups, and to congregations of other faiths who now (or have in the past) share the sanctuary of the Big Red Church. A cell phone company rents space in the steeple for its equipment.

The result is that the congregation has grown and now comprises mostly young people of a wide variety of ethnicities and national backgrounds.

"I’m about the oldest one here now," jokes McDonough and he’s in the 50s.

Fortunately, those eight people were driven to turn around the situation, or there might not be a Calvary at all.

And that’s been only one of the challenges over the years. 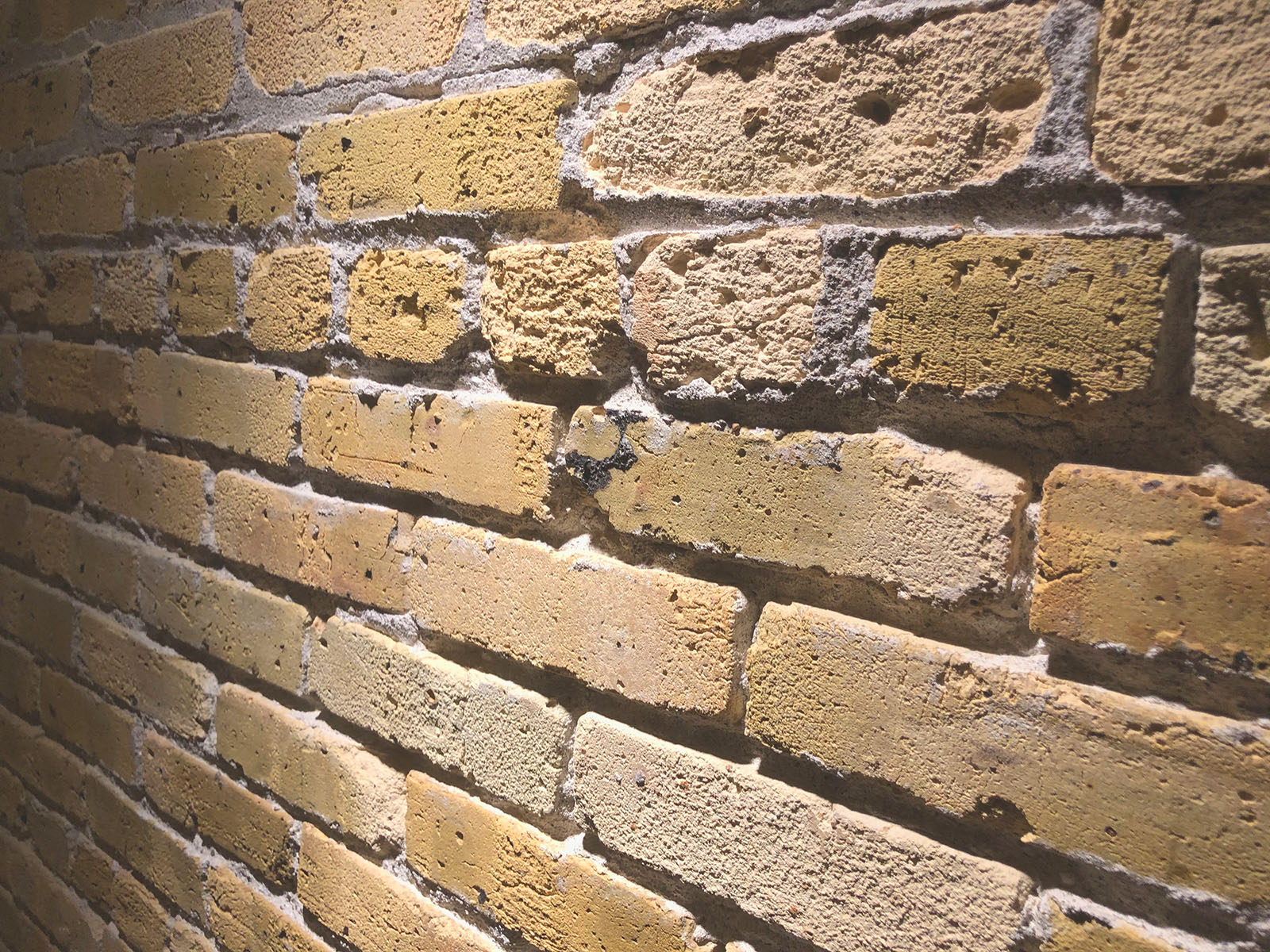 The gothic revival building was designed by the firm of Koch & (Julius) Hess – the building was among Koch's earlier works – and contracted out in 1870 – the year after the congregation was organized – as the first Presbyterian church west of the river (third overall in the city). It would cost $60,000.

While the church was being built, the congregation met in a frame building behind St. James Episcopal Church up the street.

The cornerstone was laid May 10, 1871 and the cream city brick building (long since painted red) was dedicated on March 3 of the following year.

Because the church is only 150 feet deep and 70 feet wide, its two spire are imposing. The smaller one, on the left, is 105 feet tall, its western sibling reaches 202 feet.

When it was completed, someone in the congregation scoffed at the precariousness of that slim, soaring tower and suggested that a team of horses could pull it down.

Koch, rarely one to step down from a challenge, it seems, told him, "go ahead, give it a try."

"The guy got his team of horses," says McDonough. "Of course, back then, everything was shipping so they had the big ropes to work with. They got the rope up, tied it on and tried to pull it down."

As you can see, the horses failed. 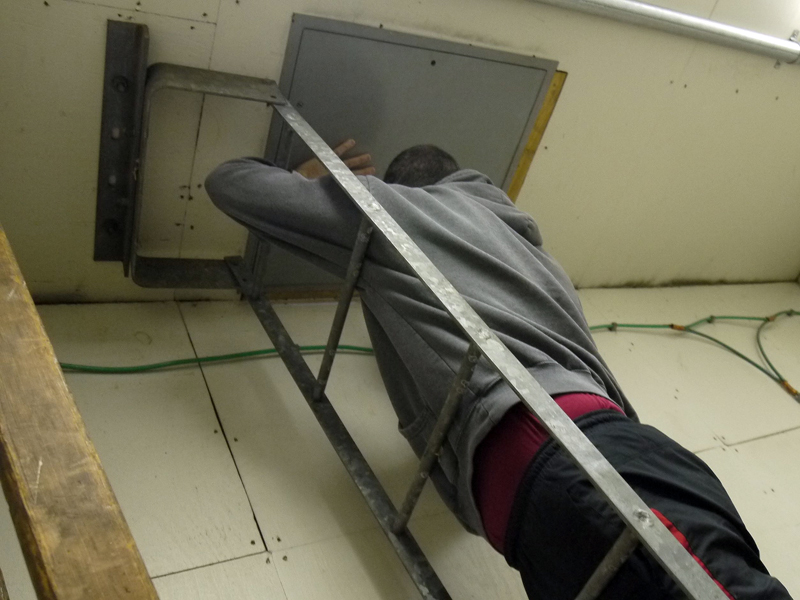 McDonough was kind enough to make the climb up to into the steeple with his guests. And it is literally a climb. Unlike most steeples and bell towers I’ve visited, this one is not accessed by stairs. Instead a thin metal ladder leads up to a scuttle hatch in the ceiling up in the choir loft.

We arrive in a small square room behind the two gothic windows you see in the tower just above the roofline of the church. Then, it’s up another, this time much more ancient, wooden ladder (by the light of an iPhone flashlight), into the space behind the three windows at the next level.

From here, you can see straight up to the top, though to get there one must scale a "ladder" made of short wooden boards nailed up along a heavy beam. This was an option no one jumped at. However, there is a heavy cable strung up to the top so that workers can attach a harness for safety. Had that gear been available I’d have considered the trip. 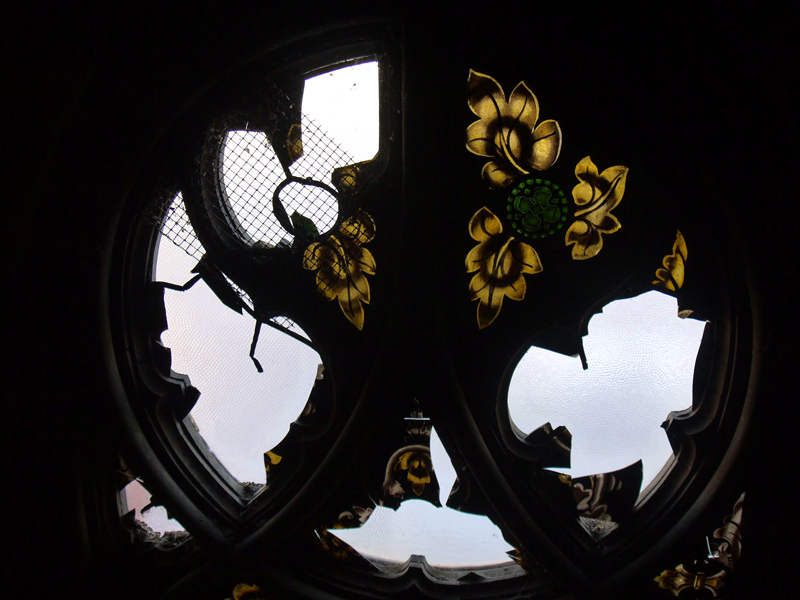 Instead, we make our way back down, noting with sadness a broken stained glass window (no longer visible from the outside), and head for another scuttle, this one about 10 feet up in a wall in the choir.

McDonough opens the hatch and we climb up to the rafters above the sanctuary. There’s a relative small hole affording access into the small steeple, but we don’t squeeze through. Instead we make our way to the peak of the sanctuary ceiling and admire the craftsmanship and the skills workers needed to cut beams of this girth and get them up this high in 1870. 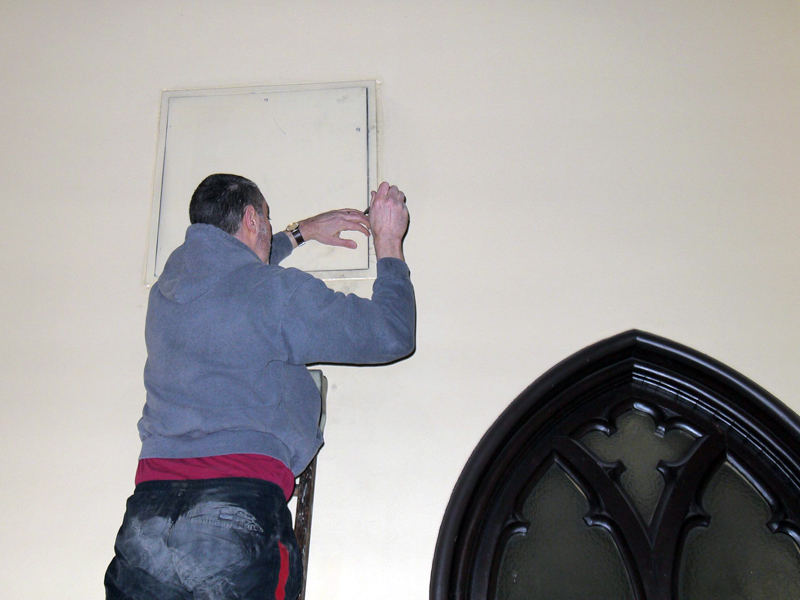 Through a small opening on the far end we can spy traffic speeding through the Marquette Interchange. From up here, those cars (and the electrical service) are about the only sign that anything’s changed over the past 145 years.

And indeed, very little did change for a while. Though there was a redecoration in 1887, the first major change didn’t come until 1910, when a small two-story addition was built on the 10th Street side to house the church office downstairs and the pastor’s study above. A second addition, a school building, was erected to the east in 1957.

The church was again made over in 1936 and ‘37 – when things had gone bad, financially and with regard to the building’s condition – after the arrival of Dr. John Lewis as pastor. Lewis spent $20,000 to renovate the building and started the church off on the road to paying off the mortgage taken by his predecessors.

But the third major threat to the survival of the building came on Wednesday, Jan. 8, 1947, when a fire broke out on the stairs just outside the pastor’s office, damaging the nave and its roof and leading to much of the sanctuary being rebuilt.

"The fire took out the entire chancel and the two front windows," says McDonough, as we stand in the sanctuary. "If you are up on scaffolding and look at all of the ornamental
work, some are actually wood but everything else is (made from) plaster molds. All that scroll work you see, it looks more carved than it really is. If you were to go to the front, you could actually see the charred wood and they just plastered over it and repainted it."

According to a church history prepared for Calvary’s 80th anniversary, "the whole beautiful interior of Calvary was a sad sight of desolation the next morning. But the structure itself was saved. Services in the church ceased only for the Sunday immediately following the fire. On the next Sunday and for many months thereafter the congregation met in the church parlors and on a bare pine board floor."

Perhaps ironically, it was Lewis – the pastor who stepped in to turn around Calvary a decade earlier – who was charged with igniting the blaze that caused an estimated $150,000 in damage. On Feb. 22, 1947 the Chicago Daily Tribune howled, "Pastor seized as firebug in church blaze."

Though The Milwaukee Ministerial Association expressed support for the 72-year-old Lewis, who initially said, "I wouldn’t do such an atrocious thing as to burn down my own church," a June 10 newspaper report suggested that Lewis used kerosene to achieve his desire for a bigger church.

But some speculate that it seems more likely that Lewis – who was apparently in talks to merge with a Wauwatosa church – may have hoped to force the hands of members at Calvary reluctant to combine congregations.

Later that month, Lewis was found guilty of arson, sentenced to 1-5 years in the state prison and sent to Waupun. Some called the verdict unfair, and it divided the Calvary community. Lewis – who had struggled with health problems all year – received a Christmas pardon from acting Gov. Oscar Rennebohm in December.

"Now is the time to stand by the church," Dr. Clarence A. Spalding, who arrived to lead the congregation during this difficult period, told the Milwaukee Sentinel on June 30, 1947. "The church is bigger than any individual. This is the time for closest co-operation. Anything less is more damaging than arson."

Sounds a lot like the attitude that led a mere eight parishioners to rewrite the future of the Big Red Church.