The power of music was alive and well on Saturday night, as pop's rising star, Camila Cabello, brought together fans of all shapes and sizes to the historic Riverside Theater.

The power of music was alive and well on Saturday night, as pop’s rising star, Camila Cabello, brought together fans of all shapes and sizes to the historic Riverside Theater.

"Looking around at each and every one of you, this room is full of different stories, different backgrounds, religions, ethnicities, sexual orientations," Cabello told the crowd with her fist held high in the air.

Cabello wasn’t just paying lip-service either. A simple glance through the lobby revealed one of the most diverse audiences that the Riverside has seen in quite some time.

The crowd wasn’t the only thing with some variety however, because 103.7 KISS-FM’s "(Almost) Summer Show" – and Cabello's Milwaukee stop for her "Never Be The Same Tour"– had a stacked line-up of emerging artists that each brought something different to the table.

Up first for the night was 15-year-old Skylar Stecker. Born in Tampa, but raised here in Wisconsin, the Badger State was home to some of Stecker’s first gigs before she moved to the West Coast. Years ago the young singer/actress blew crowds away while performing the National Anthem at Camp Randall Stadium and the Kohl Center, and now she is hitting the ground running. 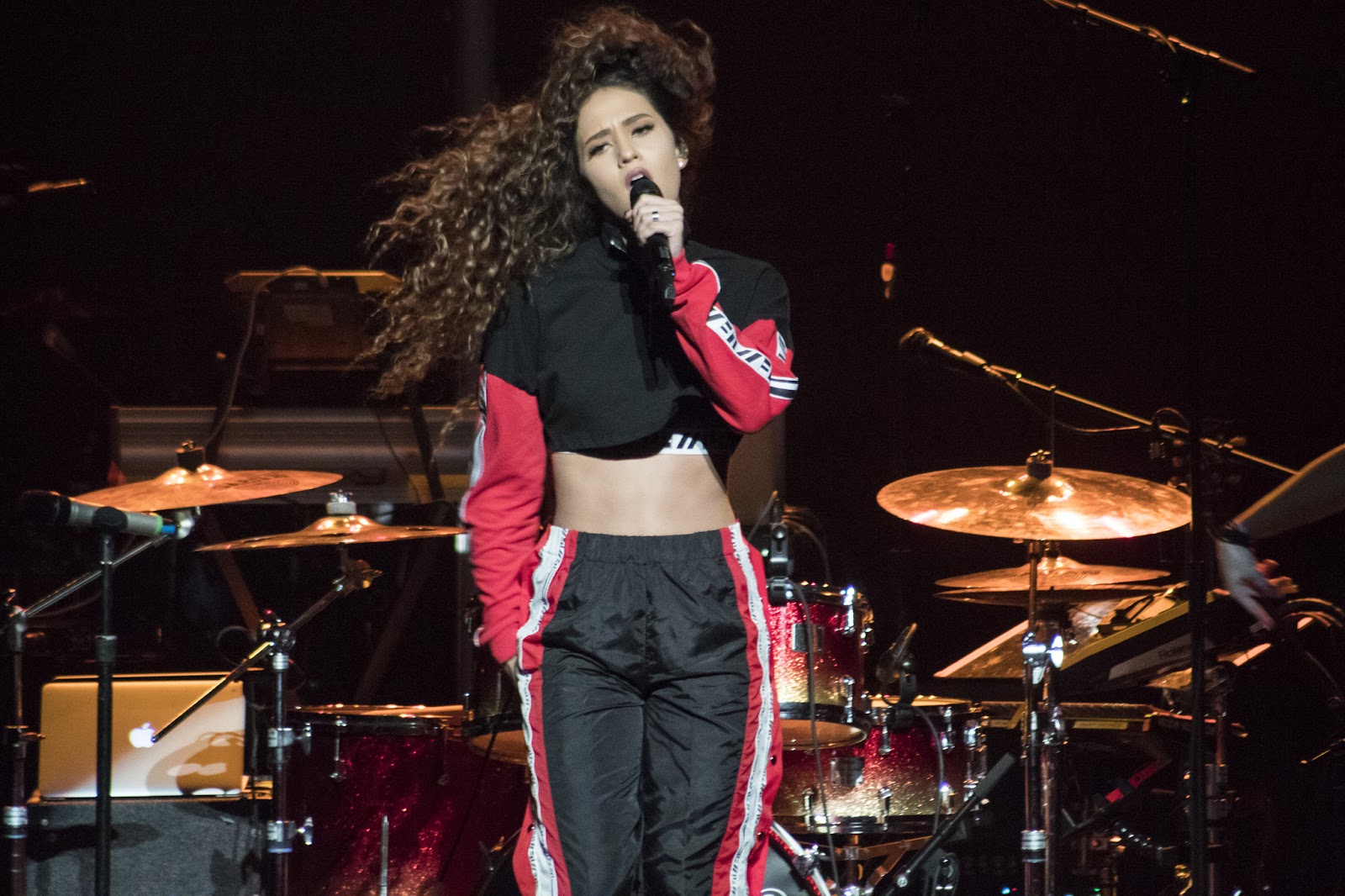 Since her humble beginnings in Wisconsin, Stecker has created a loyal fan base through her entertaining covers on YouTube, she’s been co-signed by iHeartRadio’s Elvis Duran, and was even named Radio Disney’s "Next Big Thing."

Stecker can sing, act and dance, and her infectious personality was on display the entire night, even beyond her performance. Stecker took time to take selfies with fans in the lobby after her set and you couldn’t miss her jamming out to Bazzi and Cabello in the VIP balcony. The sky's the limit for this young up-and-comer.

Next up: the pop/rap duo of Jack & Jack hit the stage and were immediately met with screams throughout the venue. Instantly it was clear that Cabello wasn’t the only one to help fill the seats for the night. 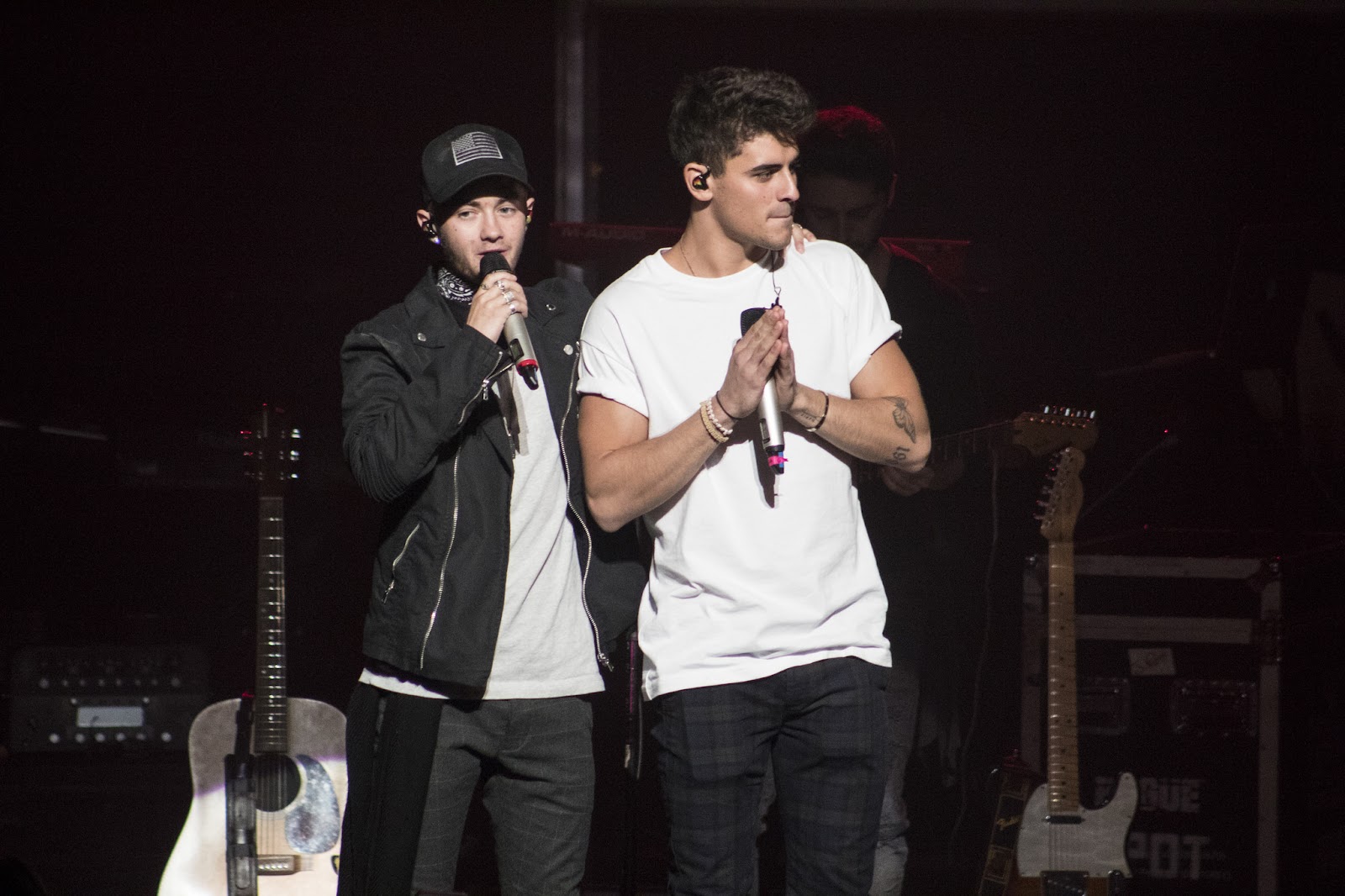 Although Jack Johnson’s rapping was outshined by Jack Gilinsky’s singing for the majority of their set, the duo and long-time friends certainly work well together. Energy levels were high throughout the performance and both Jacks have a stage presence beyond their years.

Complemented with a live band and a special singing of happy birthday for Johnson’s mother, the Jacks brought the party to the Riverside.

Then it was time for Michigan-singer Bazzi to hit the stage. The only artist of the night’s opening acts that is regularly part of Cabello’s "Never Be The Same Tour," Bazzi surprisingly had the shortest set of all the openers. 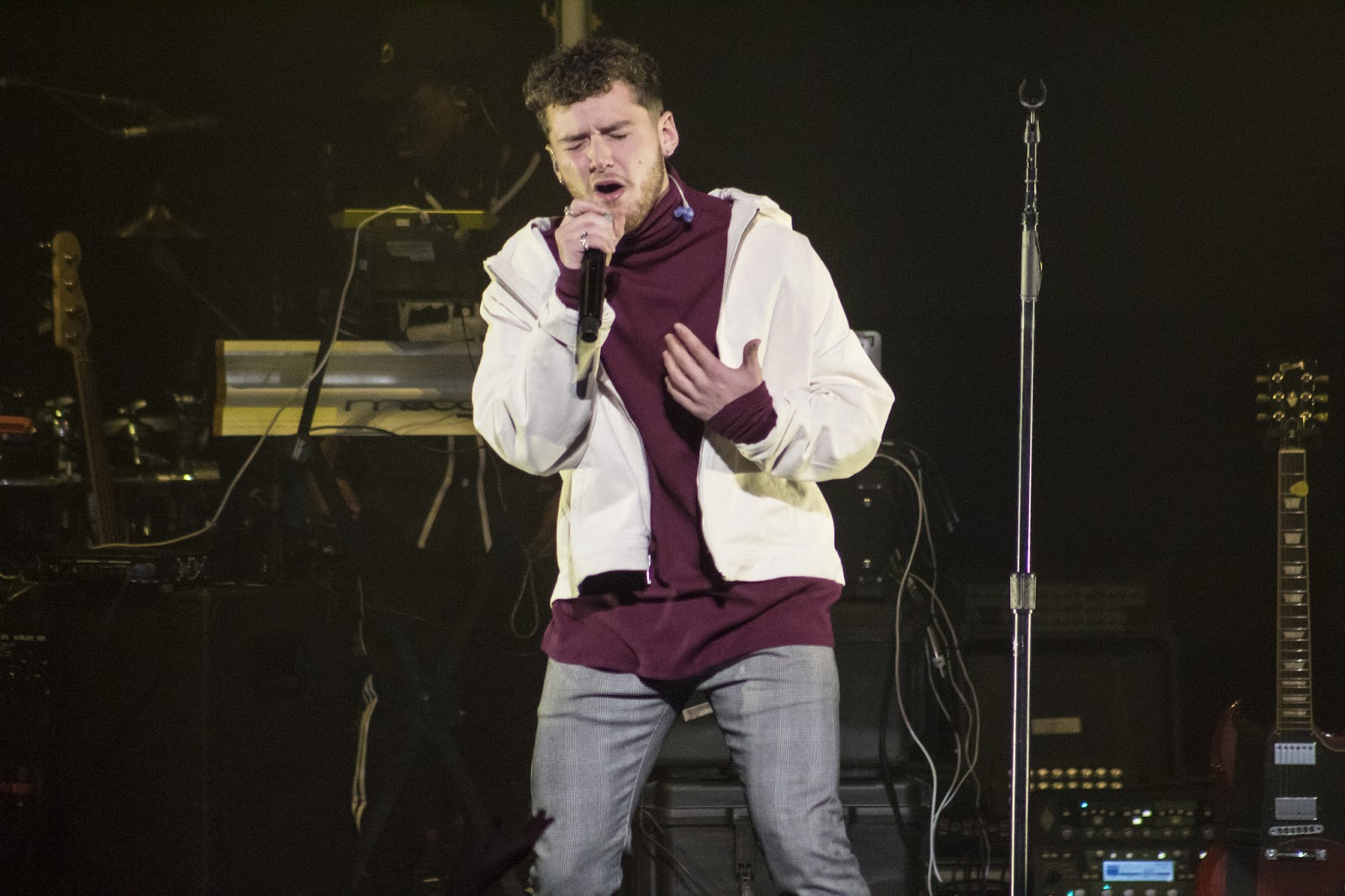 But even with a shortened set, Bazzi still found time to impress the sold-out crowd. With a soothing voice, somewhat similar to The Weeknd, Bazzi performed a few tracks from his brand new debut album, Cosmic.

In just five songs, Bazzi showcased his vocal talents, performed his breakout hit "Mine" and absolutely shredded it on electric guitar for a solo on "Alone." If Bazzi left you wanting more, fear not, he’s currently set to return to the area, 90-miles south for Chicago’s Lollapalooza.

Three acts later, it was almost time for Cabello to bless her Milwaukee fans. "Camilizers" got loose to Whitney Houston’s "I Wanna Dance With Somebody" and one fan had the attention of the crowd with an entertaining dance routine to Michael Jackson’s classic hit, "Billy Jean."

Moments later, the lights were low and screams began to fill the venue. With cell phones and yellow "NBTS Tour" hoodies flooding the theater, a video countdown emerged. After the last tic, the East Havana-born Cabello emerged to her hit single, "Never Be The Same."

Cabello grabbed her mic stand and immediately got her performance started on a high note. Next, Cabello transitioned into "She Loves Control," another track from her debut LP, "Camila."

Cabello went on to perform her entire debut and more throughout the night. 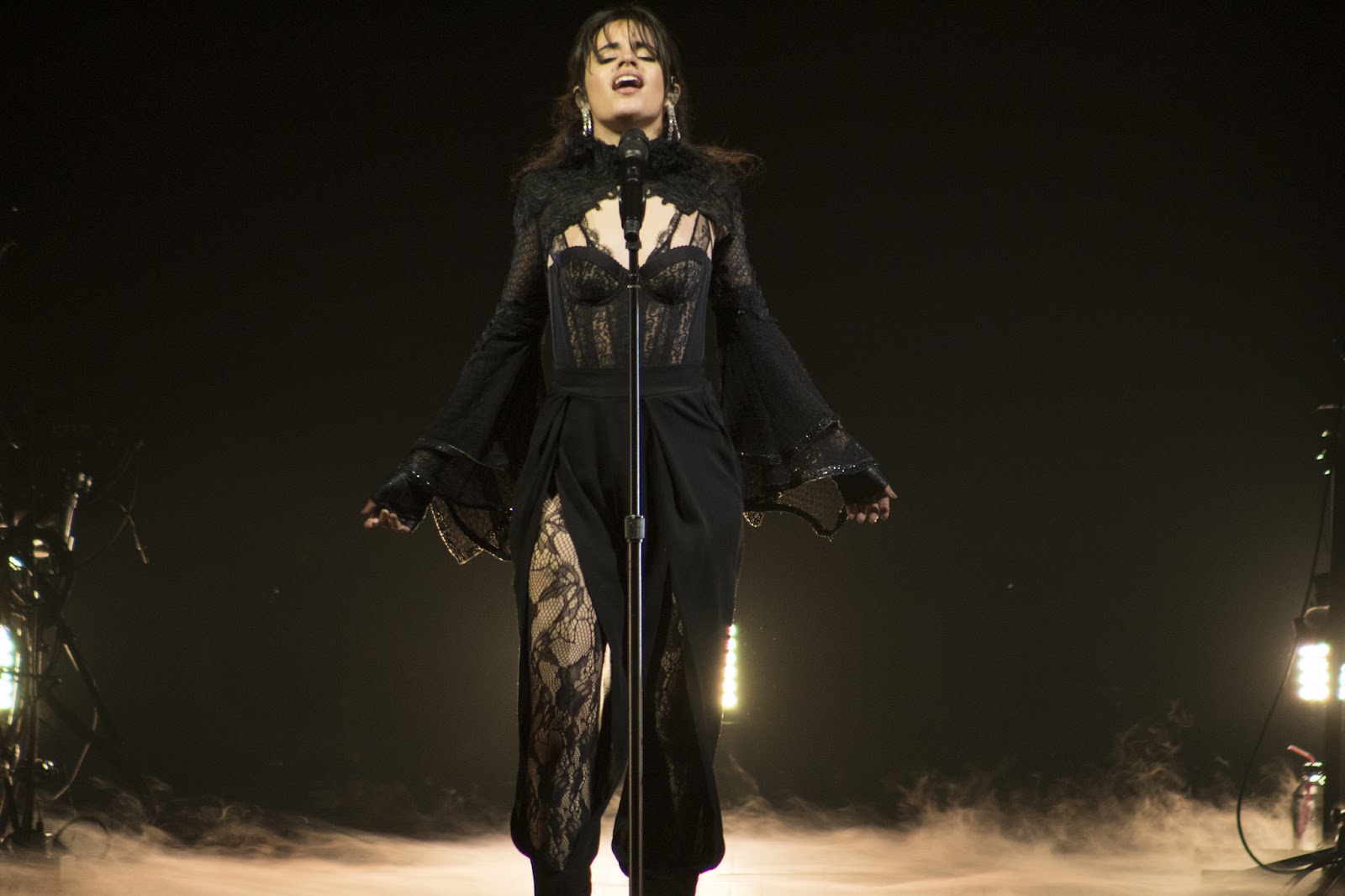 "You guys know I’m from Miami, right? Let’s get hot and sweaty!" Cabello told her fans before shaking that thing to Sean Paul’s 2003 hit, "Get Busy."

From start to finish Cabello danced with her talented crew of backup dancers, while telling her story through her new album.

One highlight from the first half of Cabello’s performance was her trip to the keyboard, for an emotional and stripped down performance of "Consequences."

Another emotional moment of her set came as she performed her song, "Something’s Gotta Give." Since its release the song has taken on new meaning, as Cabello now performs the song to a video montage of various modern day protects. As clips from the recent gun control, Black Lives Matter and immigration protests began to roll, the crowd cheered to show their support.

An immigrant herself, Cabello is an active voice for DREAMers and immigrants everywhere. While on stage at the Grammys, Cabello used her platform to remind the world that America is a country of dreamers, by multiple definitions of the word.

While pop music doesn’t always tackle the tough social issues, Cabello is not afraid to record more than just a club record, and her Milwaukee fans embraced her courage to do so on Saturday night.

After shining light on social issues, Cabello also used her performance to share some important views on mental health. "You have to treat yourself like you’d treat your best friend," Cabello explained. 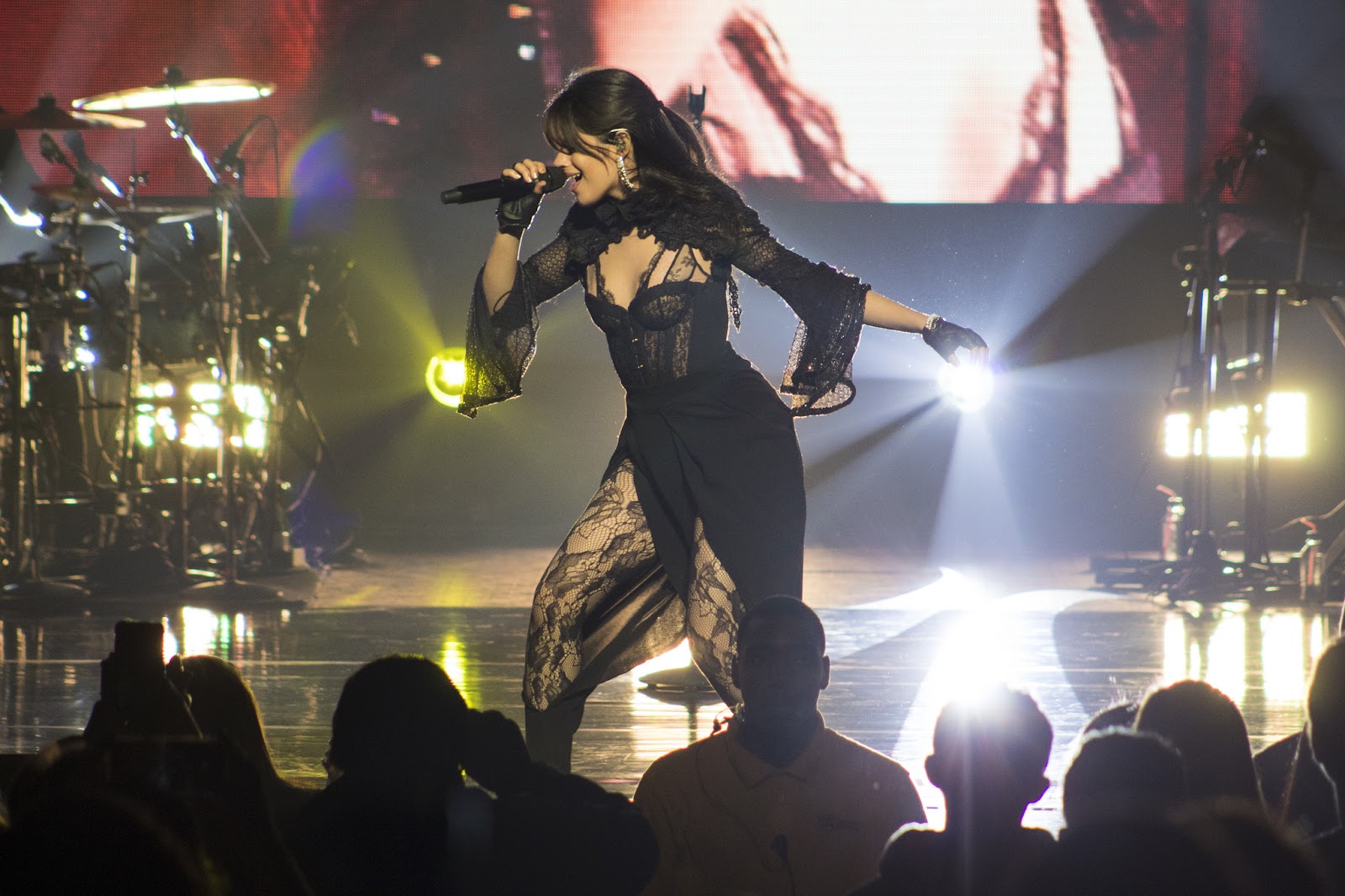 Drawing the metaphor of "scar tissue" – your body’s way of healing itself when it’s been burned or hurt – Cabello performed her track of the same name, while urging her fans facing personal battles to fight through and become stronger as a result.

Following the emotional performance, Cabello performed "In The Dark," in a very literal fashion by actually having the venue turn of the lights. As fans began to light the theater with their cell phones, Camila took things a step further and had the crowd go silent. With only one isolated "I love you" scream in the background, Cabello finished the track acapella, with no microphone assistance. This made for a very intimate and unique moment. 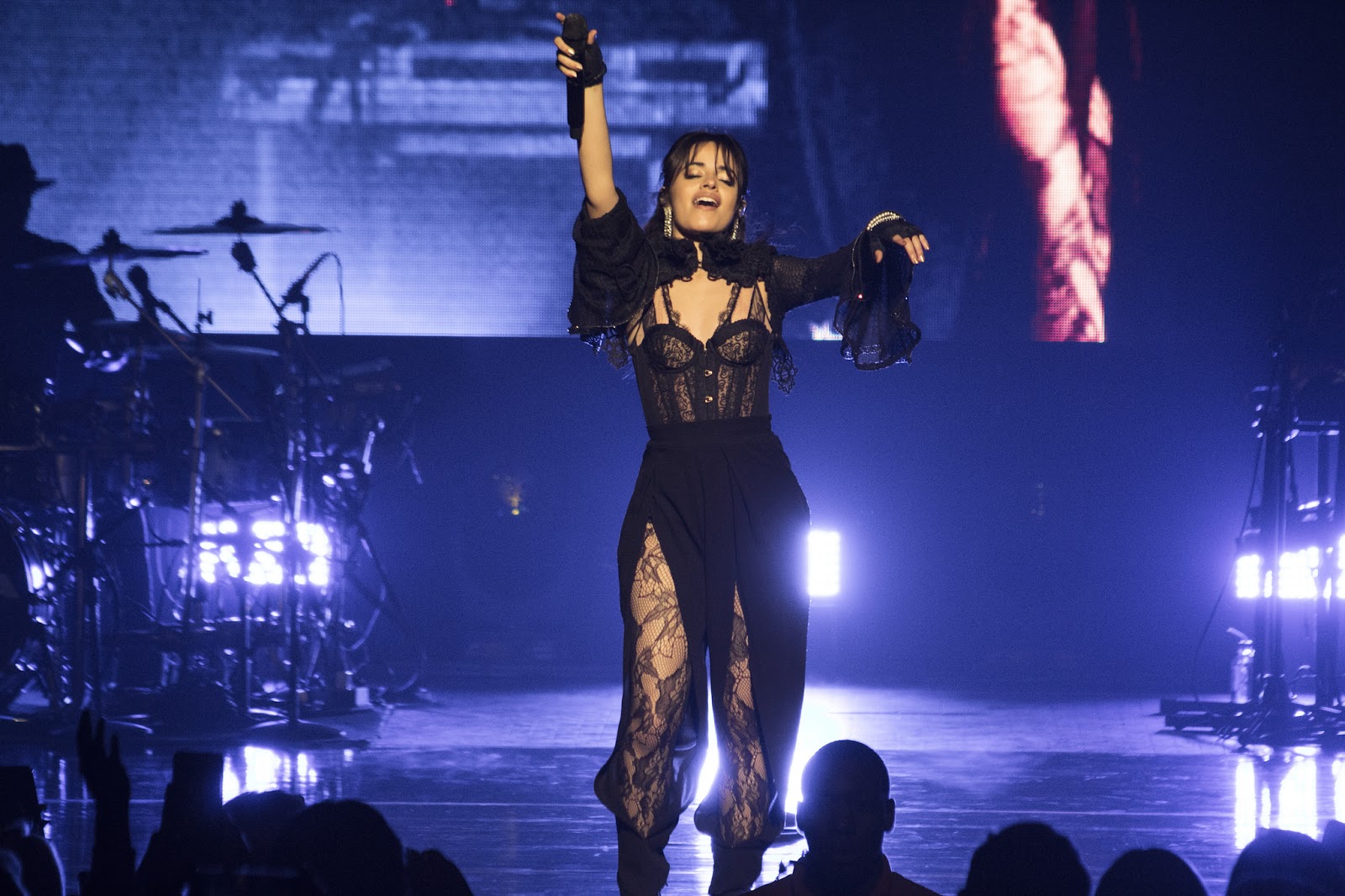 Cabello then ended her set with "Into It," while the entire crowd joined her by raising their fists to demonstrate the power of love and music. Cabello said her goodbyes to the Milwaukee crowd, before returning for an encore performance.

After performing her Pharrell-assisted Spanglish track "Sangria Wine," which has yet to be released, Cabello ended the night with none other than her breakout number one hit, "Havana."

Not only is "Havana" catchy, but it’s a personal record about Cabello's Cuban roots and an initial validation to the former Fifth Harmony stand-out’s decision to pursue a solo career.

Half of her heart may be in Havana, but after tonight there’s at least a piece of it in Milwaukee.

"Never Be The Same"

Table for two at The Noble

Table for two at Odd Duck