Reinventing ourselves takes a lot of guts, something all five of these women - who switched careers at the age of 40 or older - have plenty of. Some left the corporate world, some joined it, but all of them share one thing in common: they are now closer to their True Norths.

Reinventing ourselves takes a lot of guts, something all five of these women – who switched careers at the age of 40 or older – have plenty of. Some left the corporate world, some joined it, but all of them share one thing in common: In stepping outside their professional comfort zones, they found themselves closer to their True Norths.

Jennifer LaPorte, who lives in Arbor Vitae, in Vilas County, is a hospice bereavement coordinator and hospital chaplain. She started doing this compassionate work as a volunteer in 2011 while working on a master’s degree at Marian University. In December 2014, LaPorte received her Master of Science in Thanatology (the study of death and dying) at the age of 46.

"I have been through some tough times personally and financially over the past few years, including the loss of our businesses and a divorce, among other things," says LaPorte. These losses have been transformative for me in my career and my personal as well as my spiritual life, and I believe I have acquired a compassion for those who are going through losses other than death, but losses that may be just as impactful."

Currently, LaPorte is working on her first unit of Clinical Pastoral Education in order to further her work in chaplaincy.

"I love that my children observed me doing homework," says LaPorte. "There’s no substitution for modeling. Nothing gets them to do their homework like saying I have homework to do, too."

Previously, LaPorte – who has a degree in French from the University of Wisconsin-Madison – worked as a French teacher, dabbled in theater and then started a career in arts administration as cultural arts coordinator – and later the artistic director – of Latino Arts, Inc. at the United Community Center in Milwaukee. She was also the director of Alverno Presents, the performing arts series at Alverno College, from 1996 to 1999.

"After I started having children, I worked with my husband in our audio-visual systems integration business for 10-plus years," says LaPorte. "In 2010, we moved to Eagle River when we purchased a second business in the northwoods. When the businesses folded, I started my career in hospice."

Originally, LaPorte was drawn to the work by a billboard on the side of the highway advertising the Marian University grief and bereavement program.

"I saw it as a sign that this was my calling," says LaPorte. "I called the director of the program and two days later enrolled in the master’s program."

LaPorte says every day she wakes up honored to do the work that she does. 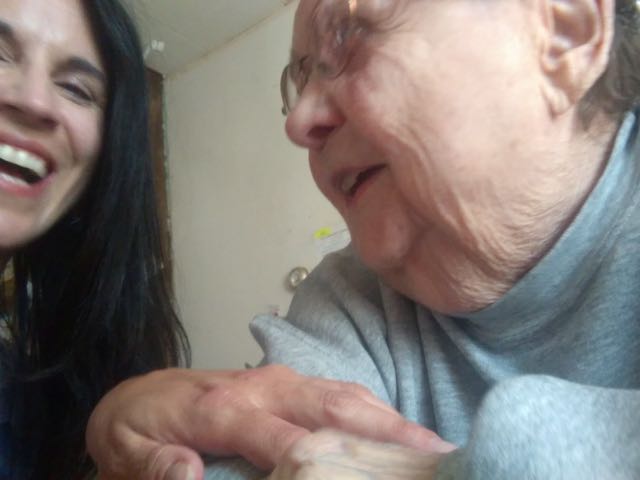 LaPorte with one of her patients, 97-year-old Helen.

"We have a long way to go in our society regarding acceptance and reconciliation of death and dying, but I firmly believe in what Dame Cecily Saunders, the founder of Hospice said, ‘You matter because you are you, and you matter to the last moment of your life. We will do all we can, not only to help you die peacefully, but also to live until you die,’" says LaPorte.  "I am grateful to do something for a living that reflects who I am at heart."

Meghan Koven is an Organizational Change Consultant for one of Milwaukee's biggest employers. Having a corporate job is a big change for Koven, who started her career as a chef after attending culinary school in Portland, Ore.

"After working in some great Milwaukee restaurants, I found myself mentally bored," says Koven. "So I transitioned out of cooking by becoming an HR manager for all of the kitchen staff at Marquette University, which led me back to school for my master's degree."

Koven, who earned her degree in Organizational Development from Alverno College in 2006, says her current job is to "assist people in the company in preparing themselves and their reports to change the way they work in a wide variety of ways."

"Our organization is undergoing a significant evolution, and change is everywhere and accelerating in its pace. My role focuses on the human side of change," she says.

Koven finds her current position both challenging and rewarding – attributes that she didn’t experience enough of in her "past life."

"Part of my job is to challenge people to think differently," says Koven. "The organization is working towards operating with more agility. It's an exciting time to be there."

Koven accepted the position nine months ago, at the age of 43. She says she did not expect to land her job because she is "too out of the mold."

"I literally threw my resume at them online and didn't even include a formal cover letter. I went in for a series of interviews, but still thought that, in a million years, they would never hire someone like me," she says. "So I was floored when they made me an offer, and came to find out that my boss wanted to hire me specifically because I was so different. Who knew?"

After working in public relations for 20 years, Lisa Balcerak started her own business, Balcerak Communications, in 2011.

"I like having my own business because I have schedule flexibility and the control to choose the clients I want to work with," says Balcerak. "I love my job and continue to learn new things all the time."

She says not being afraid of technical subject matter has given her a niche in the PR industry. "If it’s technical and geeky, I can write about it," says Balcerak.

"One day I wanted to move all my family pictures cluttering my refrigerator door. So I got a metal wall hanging and hand-made small, strong magnets to hold the pictures without overtaking the entire collage. I enjoyed making those magnets, and other people loved them, so I started making more," she says.

Balcerak started a side business called MagNutty Mighty Mini Magnets last summer, at the age of 41.

"I became a PR professional by day and a craft artist by night," she says. "It has been very rewarding, fun and hard work all at the same time. Creating MagNutty products stimulates a different part of my brain than I’d been using before." 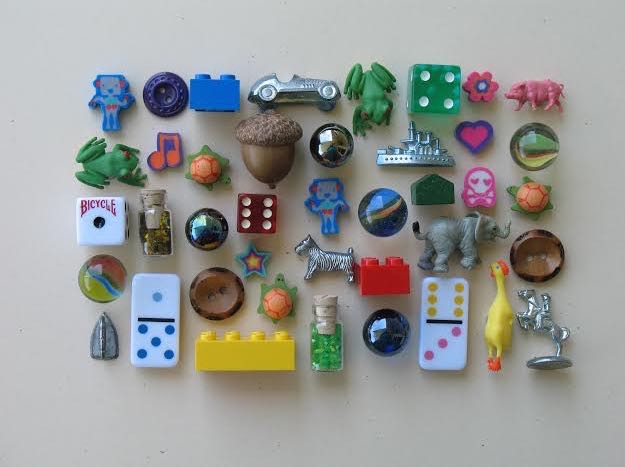 Mini magnets are available online and at Season of the Heart in Greendale, Sparrow Collective in Bayview, Pink Bunny Games in South Milwaukee and The Gift Box in West Allis.

"I use nostalgic items such as Monopoly game pieces, Legos, marbles, plastic animals, dice, acorns and vintage game cards," she says. "It is really fun to see people smile and recognize items from their childhood. I like to see people connect with the young and playful side of themselves."

Balcerak says the two businesses complement each other and have made her better at both.

"Now that my brain works in a more open and artistic way, I see opportunities for more creativity in the writing I do for my clients," she says. "Also, I see things differently than before. I can look at a simple item, like a toy or a button, and see its potential to be used in an artistic and different way. That’s new for me. I love being able to think that way."

At the age of 42, Balcerak says she is still learning who she is and what she wants to accomplish.

"Experience has shown me that I no longer have an interest in climbing a corporate ladder," says Balcerak. "However, without years of experience in different professional environments, I probably wouldn’t be where I am today. I had to try different jobs before I figured out what I really wanted to do. And I don’t think I’m done. I haven’t figured out what I want to be when I grow up, and I’m OK with that."

Sally Nordstrom changed careers in her fifties. Today, she owns her own business, Ms. Sally Jo's Oversized Escort Service (the humor of this name is intentional) which is a pilot car company.

"I escort oversized trucks," says Nordstrom, who is now 62. 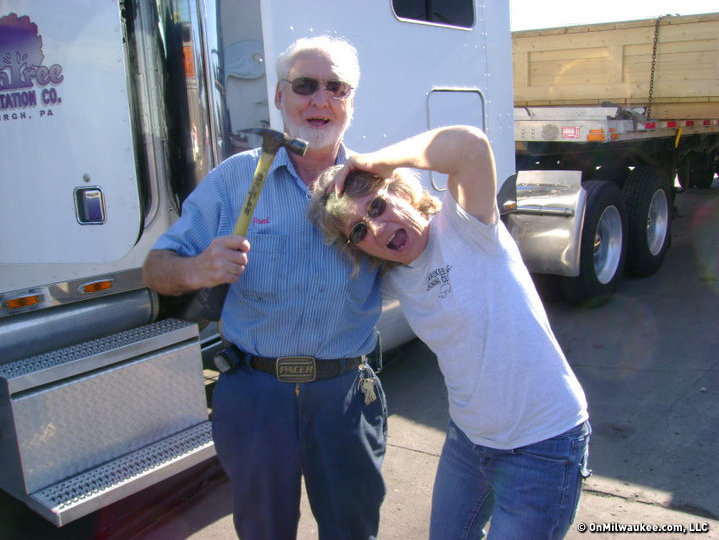 Prior to trucking, Nordstrom, who in her new career spends about 300 nights a year in motels, was a secretary and a legal assistant for many years.

"I made the change because I hate being cooped up in an office," she says. "I’m a self-starter and need to be allowed to think for myself. I admit to failing at office politics."

Of course, nothing is ideal and there are cons to her new line of work – specifically that it’s sometimes taxing on her personal relationships because she is on the road so many hours a week.

"Also, I’m usually tired and dirty, and I have to work and drive in horrible weather," says Nordstrom.

The best parts of her new career are that Nordstrom can wear casual clothing, travel with her dog at her side and listen to a lot of music while driving.

"Plus, the people I meet are great," says Nordstrom. "We are usually on backroads and I see parts of the country that most never will. I have my freedom and that is the most important thing in the world to me. My life is one long road trip."

Agnes Friedlander started her business called Paint Party Art Studio – a Kenosha studio that teaches beginners how to paint while sipping wine – at the age of 53. Prior to the studio, she worked as a creative director and professional artist.

"Now, I just want to share the joy of painting and creating. Art is so healing and therapeutic," says Friedlander. "I have waited most of my life to open a studio and I am so grateful to have had this opportunity. It is deeply rewarding and fulfilling." 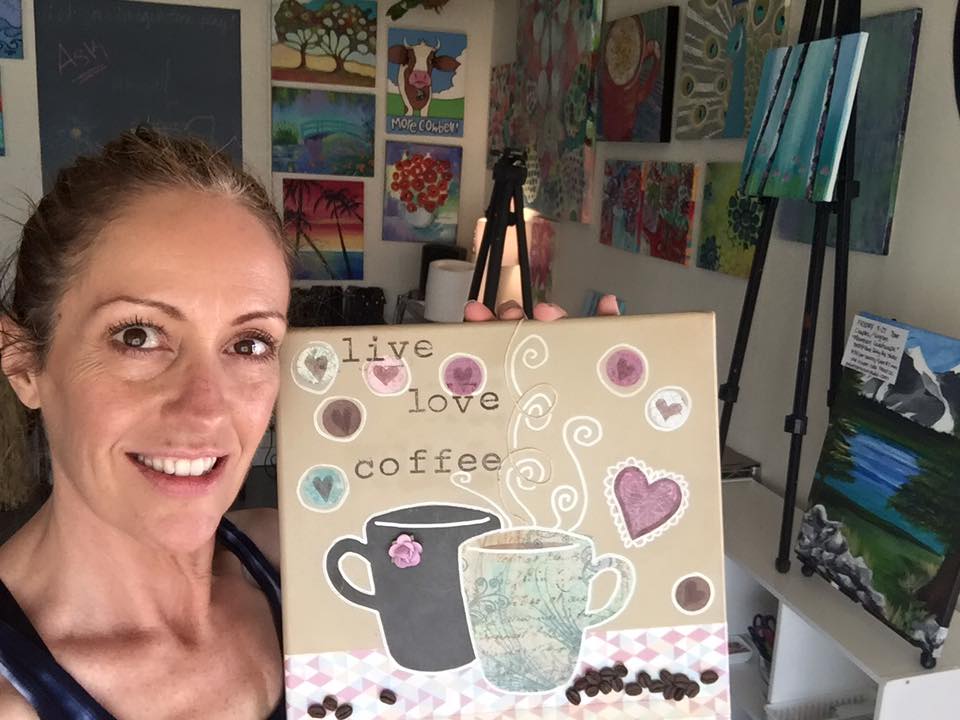 It's a dream come true for Friedlander.

Friedlander says she has no regrets leaving the corporate world because she enjoys her work so deeply.

"I get to meet a lot of people and they're always in a great mood," says Friedlander. "I strive to help people to let go and have fun and not worry about the outcome."

For some women, having the financial and emotional support of a partner has been crucial for them to step outside the comfort zone and try something new in midlife. This was certainly  the case for Julie Terwelp. 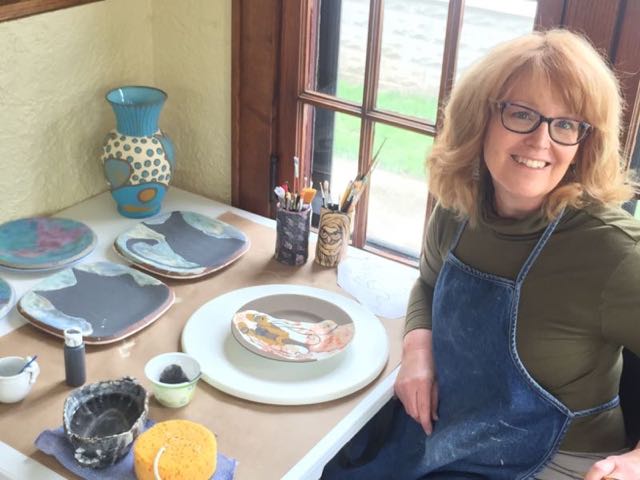 Terwelp is now a full-time artist and loving it.

Terwelp, who had been a graphic designer for 30 years, became a full-time artist who makes primarily up-cycled decorative art (she and Balcerak – along with other local artists – will have a pop-up shop on Saturday, June 4 at Little Red Store in Wauwatosa from 3 to 7 p.m.).

"I wouldn't have the security to take these steps if I didn't have the support of my husband, Mike. He's been very encouraging and knows it's ‘in my blood,’" says Terwelp. "Turning 50 had a big impact on my new direction too. It seems so cliche. I wouldn't call it a mid-life crisis, but you definitely take a step back and look at what you want to do with the rest of your life. I'm still evolving and figuring things out, but I am really happy now that art is part of my daily life."