You can see it even now as you drive past. Despite obvious changes, there's something about that big house next to the church on the corner of 35th and Highland. The church doesn't look that old, but enigmatic house sure does. That's Carpenter House, now the Hope Lutheran parish house, 1115 N. 35th St.

You can see it even now as you drive past. Despite the obvious changes, there’s something about that big house next to the church on the northwest corner of 35th and Highland. The church doesn’t look that old, but enigmatic house sure does.

While the church was built in stages over the course of about a decade beginning in 1948, Carpenter House dates to 1890, when its neighborhood wasn’t really much of a neighborhood at all yet. In fact, since it was on the west side of 35th Street, the house wasn’t technically even in the city when it was built. 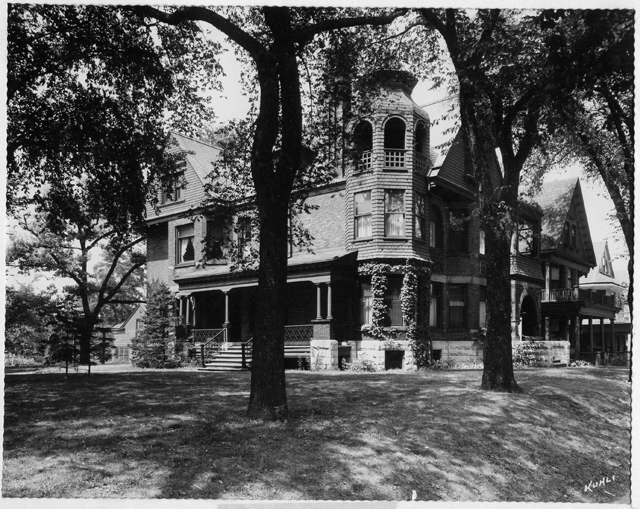 The gorgeous cream city brick Queen Anne house is a stunner outside even now, with its broad arches squaring off the entry porch – which also has some striking, stumpy and bulbous Romanesque columns – the elegant chimney, the decorative carved panels – including one under another arch, this one a second-story window – and the remains of a turret on the southeast corner of the home, which is perched atop a small hill.

Here’s how a city historical report describes the home: 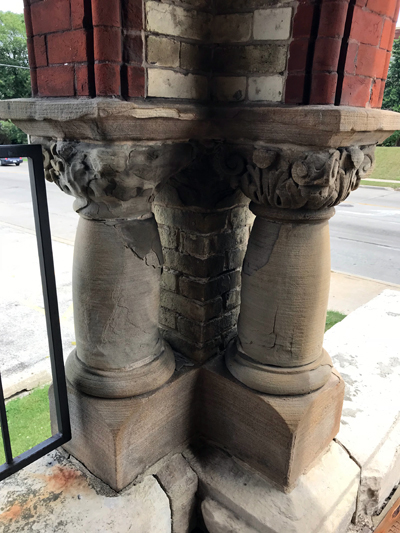 "It is two stories in height with an attic and sits on a foundation of rock-faced, coursed ashlar limestone. The same stone is used for the base of the front porch. Asymmetrical in plan, the massing is centered around a rectangular block with a steeply pitched hip roof. On the main facade, a massive overhanging gable and on the south facade a massive gambrel contribute to the picturesque-ness of the design.

"The Carpenter House is located on a heavily traveled commercial artery. Once a semi-rural part of the West Side, the house stood just outside the western city limits when it was built." 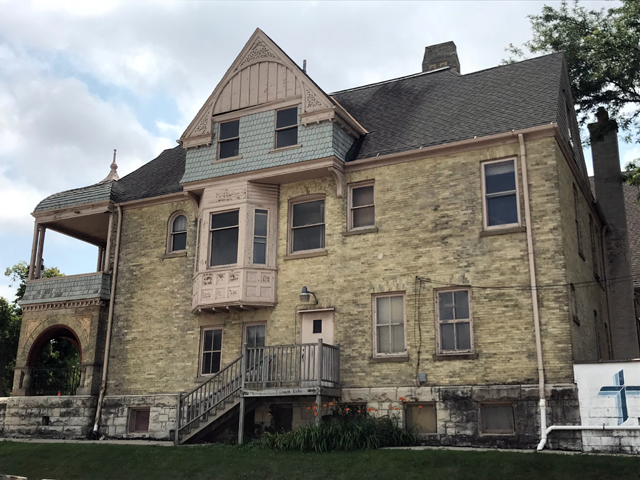 The house was once surrounded by open space and trees, which can still be seen in photos taken around the time Hope Lutheran – which, founded in 1907, used to occupy another church a few blocks north – bought the property in 1945. 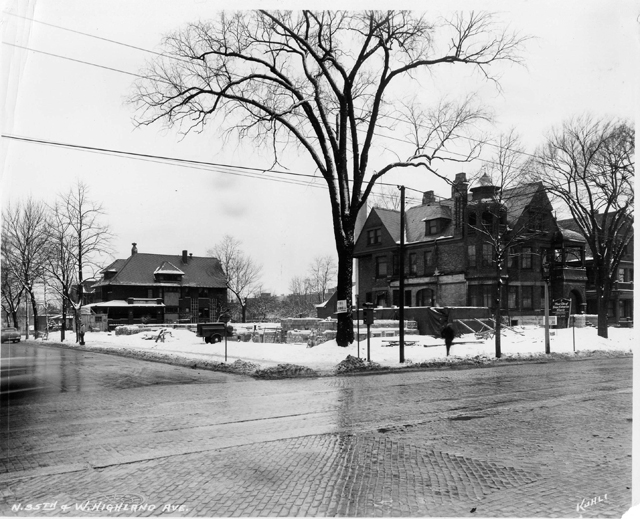 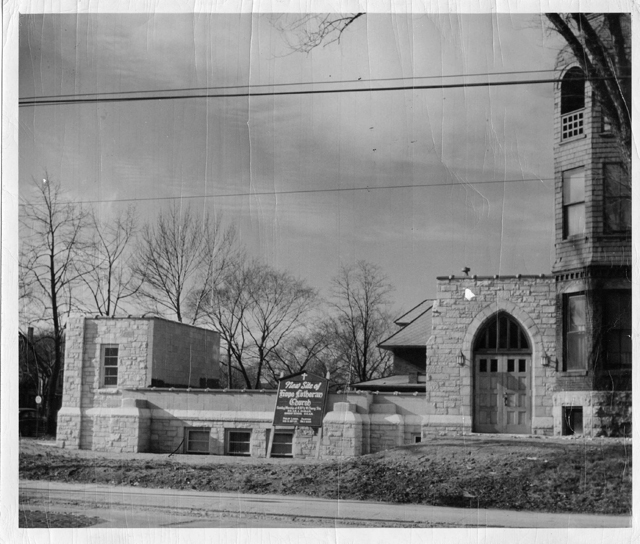 Soon after, due to limited funds, the congregation built just a basement for its new church (pictured above), holding services down there for about a decade, after which it added the sanctuary above (pictured below). 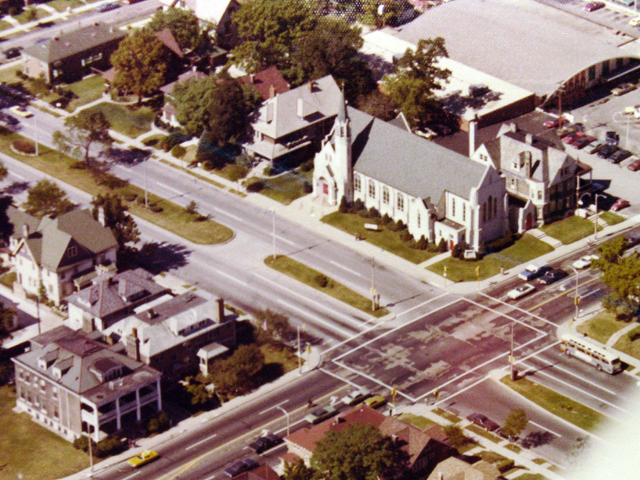 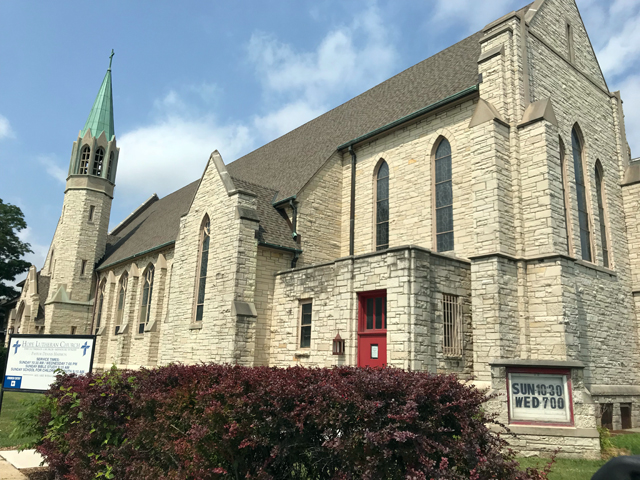 The south facade of the house was altered during both projects. The second phase more or less completely covered that side, though you can still spy bits of it from the roof of the single-story entry that connects the church and Carpenter House.

The top of the turret, which had suffered at the hands of nature, according to one church member, was removed in 1958 when the church was constructed.

These days, the Carpenter building houses offices and meeting rooms used by the church – which also rents one room to a neighborhood group – but it was built as a home for Michael Carpenter and his family.

Who was Michael Carpenter?

Despite his surname, Carpenter was actually a baker.

Born in a small house on 2nd between Wisconsin and Wells in 1846 – the year the city was chartered – Carpenter was the son of a blacksmith. He was 13 when his father died and he began working as a farmer.

At age 14, Carpenter began working in bakeries as an apprentice, including at Alexander H. Johnston Steam Bakery. When some of his colleagues opened their own place – Caldo-Breriton Bakery at 6th and Wisconsin – they hired Carpenter as foreman in 1868.

In 1869, by then married, Carpenter and his wife opened their own place at 8th and St. Paul. According to one newspaper report, Carpenter worked 20-hour days, baking at night and then making deliveries while his wife Mary tended to the 16x20-foot store.

A couple years later, Carpenter built a two-story brick bakery on 5th and Wisconsin with Herbert Underwood. Carpenter-Underwood Steam Bakery was known for its bread, cookies and bulk crackers, which they sold to stores, saloons and to retail customers, across Wisconsin. The bakery also produced candies.

In 1894, Carpenter and Underwood bought the Acme Cracker Co. and swallowed it whole. The same year, they sold to what would become the National Biscuit Co. (which we all now know as Nabisco) and the two stayed on as director (Carpenter) and Wisconsin district manager (Underwood).

The history of Nabisco is a complicated web of mergers and acquisitions, but the Milwaukee part of the story dates to the 1848 founding of the Alexander H. Johnson bakery in the Third Ward (Carpenter’s old employer).

In 1890, Johnson’s bakery – along with nearly 40 others – were acquired and merged into a single company: Chicago’s American Biscuit and Manufacturing Company. Four years later, American bought out Carpenter-Underwood.

In 1898, American Biscuit merged with New York Biscuit Company and the United States Baking Company – which, themselves, also had formed from the melding of multiple bakeries – to create the National Biscuit Co.

In addition to running what had been his own bakery, Carpenter was also operating a production facility that Johnson had built in 1891 at 222 E. Erie St. That stunning building, designed by Crane and Barkhausen, still stands today in the Third Ward.

In 1900, Carpenter left Nabisco and bought back his bakery on 5th and Wisconsin, the name of which became Carpenter Skiles Baking Co., until 1905, when Skiles was replaced as secretary by Carpenter’s son Matthew.

Because Carpenter was now in business with his sons Joseph, Anthony and Matthew, the bakery’s name was changed to the Carpenter Baking Co.

During this era Carpenter also served as Milwaukee’s fire and police commissioner. He was also a member of the city’s sewer commission, and was an early endorser of the idea to build the St. Lawrence Seaway (which wouldn’t become reality until the late 1950s, and whose construction led to my existence ... more on that in another story).

Never totally abandoning the farm work he was compelled to take on as a teenager, Carpenter became a noted expert on tree preservation. Something of a renaissance man, with diverse interests and investments, Carpenter was also active in real estate.

In 1914, the bakery, which was thought to be the biggest in the state and among the largest in the region at the time, built a three-story production facility – which no longer stands – at 530 N. 7th St.

A dozen years later, Carpenter died in the home he built on 35th and Highland, a wildly successful businessman.

"The company grew significantly from this point and at Carpenter's death in 1926, at his N. 35th Street home, it was reported that his bakery was one of the largest independent operations in the country," the Wisconsin Historical Society noted. "Production ran 24 hours a day producing Betsy Ross label white bread. After Carpenter's death, the business was run by various family members until 1954. Still known as the Carpenter Baking Company, it was run by non-family members until it became defunct."

A corporation led by Guy W. Burns on Wilmette, Illinois, bought the bakery in 1954 and just before it closed, it was sold to Chicago-based New Process Baking Co., makers of Holsum bread.

The bakery closed on Oct. 29, 1960 after 91 years in business. The Carpenter name would live on at the site, however, for another few decades before the Carpenter Building (that building – home to the Wisconsin Theater since 1924 – replaced Carpenter’s retail store which stood at the site until 1923) was razed to make room for a new convention center.

Carpenter’s legacy survives today in the form of the home he built in 1890. 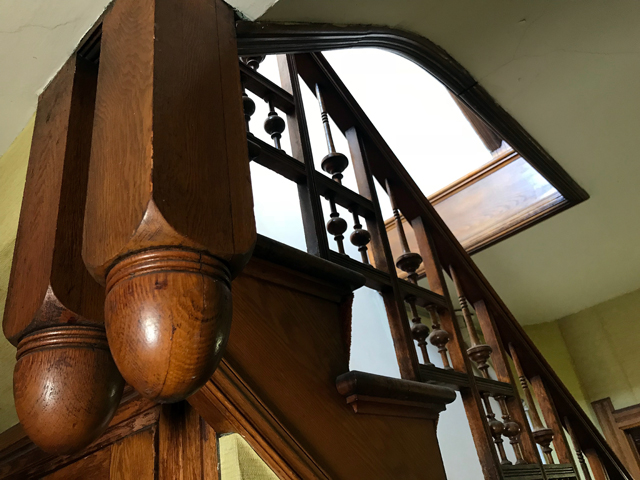 He began site preparation for the house in the summer of 1889, as evidenced by this notice in the daily newspaper:

"Resolved, that the board of public works be and is hereby authorized to issue a permit to Michael Carpenter to obtain water from the water main on Western Avenue, for the purpose of supplying water to lots 8, 9 and 10, block 2, Highland Home, in the town of Wauwatosa, provided that this said Michael Carpenter shall file with the board of public works a bond, as required by chapter 64 of the lows of 1887. Adopted."

By late October, Carpenter had hired some of the most prestigious architects in town to design his family home on the edge of town.

"Messrs. Crane and Barkhausen state that the season had been a dull one but the prospects are excellent for next spring. Among the principal buildings which they have designed and superintended the erection of during the past season are ... a residence ... for Michael Carpenter, west of the city limits on Austin Avenue, costing $12,000." 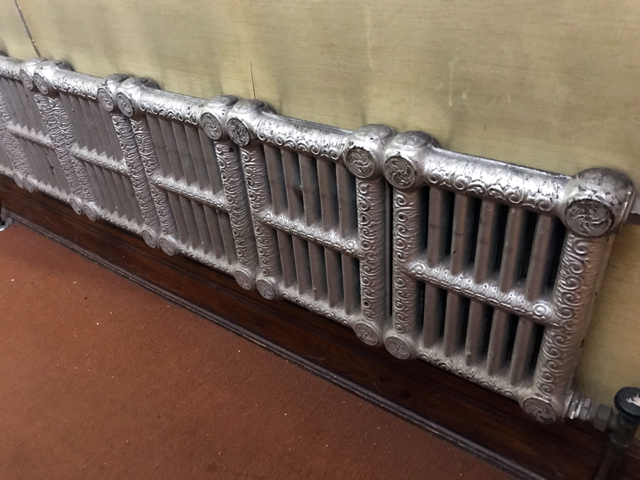 Consider that at the same time, Milwaukee Public Schools was erecting entire school buildings for $25,000 and you get a sense of the kind of financial commitment Carpenter made to the construction of his home. 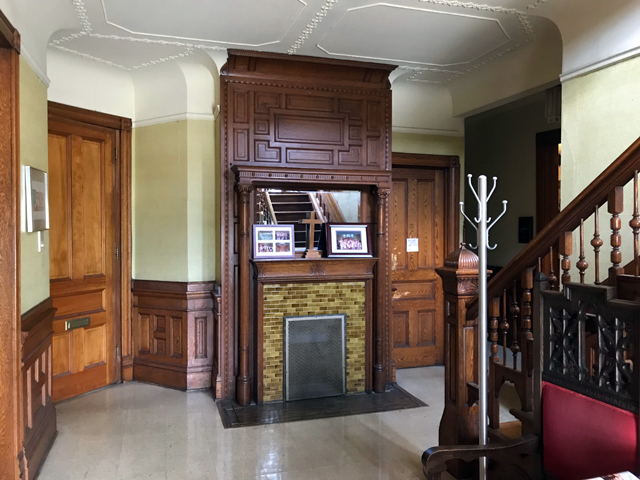 Step inside and prepare to be amazed. While there have been some changes across the decades and some things have changed not for the better, many features for which Carpenter paid dearly do survive.

Look at the gorgeous wainscoting and other woodwork – the newel post and banister on the grand staircase, the soaring interior doors, the elaborate fireplace surrounds and mantles. Heck, look at the fireplaces themselves – there are numerous throughout the two floors – with their lovely earth-tone tiles. 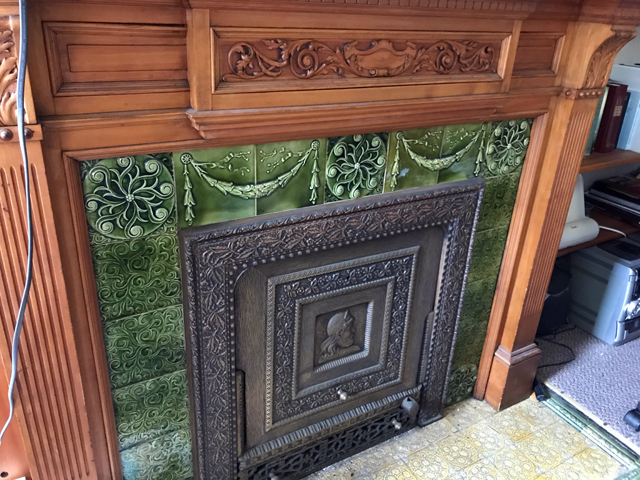 There are intricate plaster crown moldings in many rooms and don’t forget to look up. 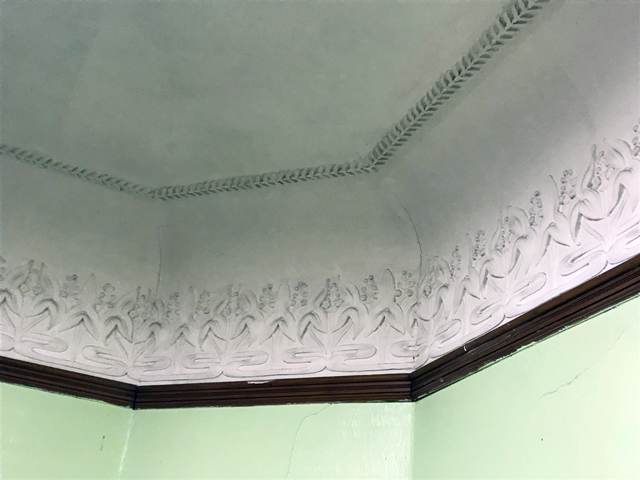 Carpenter sprung for some of the most beautiful plaster ceilings I’ve seen in this town. 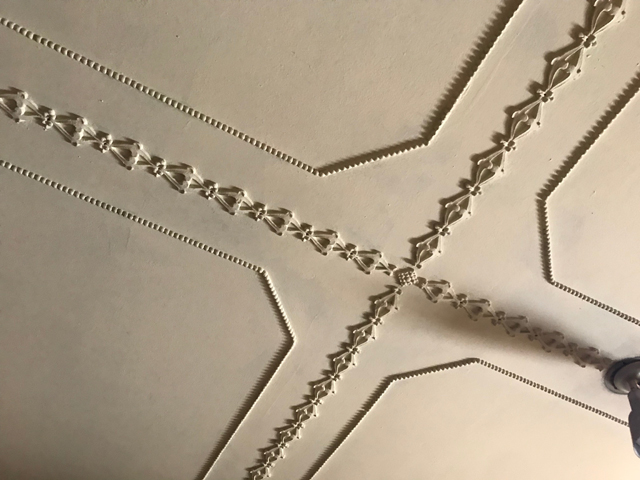 A former pantry has sturdy built-ins with decorated drawer pulls. 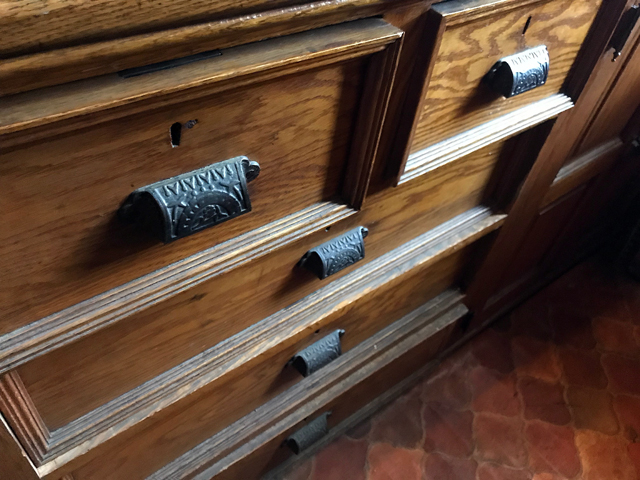 Many doors have ornate hinges. 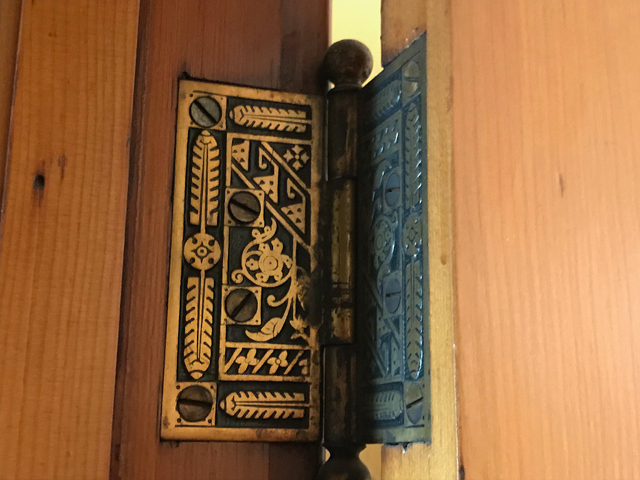 Some have original wooden door knobs. 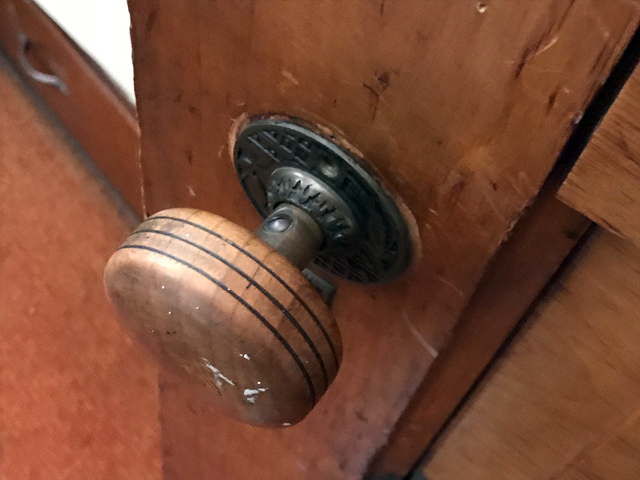 The door to one room has an unusual hinge that allows it to clear a built-in that would otherwise prevent the door from opening fully. 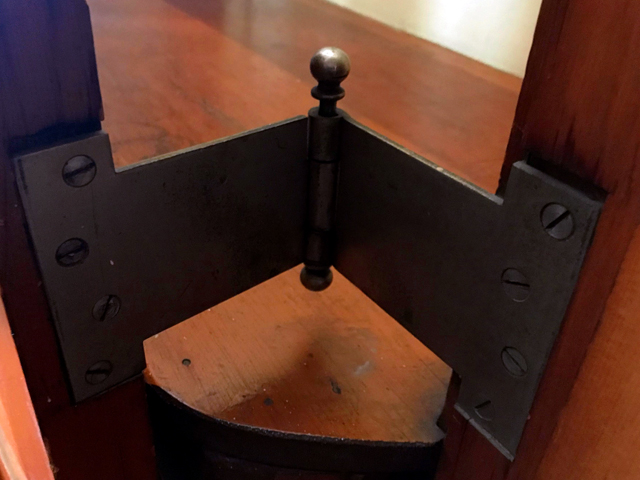 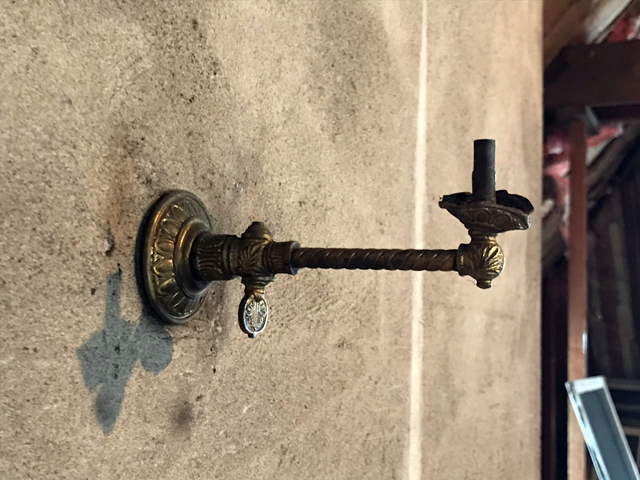 The attic – which has a servant’s bedroom – is huge and might have been built with an eye toward expansion, as the staircase up here is quite nice and the main space still has at least one gas jet. 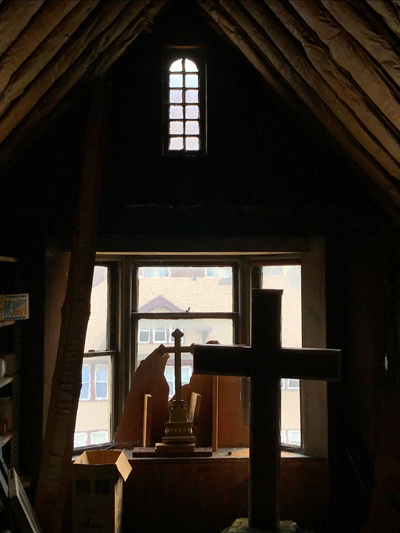 Though the long porch with its southern exposure is gone, hidden beneath the wedding of the church to the house, and the cap of the tower – which also had a porch at the top – are gone, as are some of the interior details, Carpenter House is a gorgeous testament to the kind of place that wealth and good taste could build in 19th century Milwaukee.

It’s no surprise that the home is on both the State and National Register of Historic Places.

The Wisconsin Historical Society’s Architectural Inventory entry for the home sums it up nicely: