Central Standard Craft Distillery turns four years old this year. And the distillery is having a party, and releasing a new bourbon, to commemorate the occasion.

Central Standard Craft Distillery turns four years old this year. So the distillery is having a party, and releasing a new bourbon, to commemorate the occasion.

The anniversary bash – which will also serve as the official unveiling for the distillery’s newest release, a cabernet-finished bourbon whiskey – will take place on Friday, July 20 from 6 to 11 p.m. at its Walker’s Point tasting room, 613 S. 2nd St.

The new bourbon will hit the shelves in retail stores and area bars on Aug. 1. But you can get a free sample or one of only 40 pre-sale bottles at the anniversary party, which will feature passed appetizers from Lisa Kaye Catering and a performance by the Andrew Gelles Band. The bar will also feature Central Standard’s Door County Cherry Vodka cocktails for just $4.

"For our fourth anniversary, we wanted to turn the whole trend of wine-barrel-finished spirits on its proverbial head," says co-founder Pat McQuillan. "We can’t wait to pop the first bottle on July 20 and service it to Milwaukee-bourbon lovers as our small way of saying ‘thank you for our four amazing years in business.’" 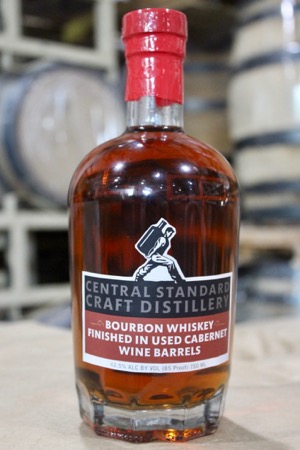 The new release begins with the distillery’s small batch bourbon, which is aged in new American white oak barrels for the first turn (a minimum of two years) and then finished in Cabernet barrels.

The result is a rosey-colored whiskey that showcases ripe fruit up front and a finish that’s smooth and redolent with notes of vanilla and caramel.

"This is a bourbon that cuts across the market," notes co-founder Evan Hughes. "I think a lot of bourbon drinkers – including the connoisseurs – will be really surprised by the full flavor of it. At the same time, it’s so approachable and smooth that I think it will appeal to the novice bourbon lover as well."

Fittingly, the bourbon also comes in a specially designed bottle, which Hughes says was designed to resemble a classic crystal rocks glass.

"It’s a refined look," he says, "for a refined bourbon whiskey."