The Chicago Cubs have taken a lot of Ls to start the 2019 baseball season - so let's add one more! This one comes courtesy of Central Standard, its new L Flag Bourbon and the inspiration behind this small-batch beverage.

The Chicago Cubs have taken a lot of Ls to start the 2019 baseball season – so let's add one more!

Central Standard today revealed a concoction called the L Flag Bourbon, a jug of limited-run small-batch bourbon wrapped in a blue label designed like Wrigley Field's L flag flown when the team loses. Available for $30 a bottle starting Thursday while supplies last in Central Standard's Union Room at 613 S. 2nd St., the L Flag Bourbon was created in tribute to the Brewers/Cubs rivalry as well as the Crew's dramatic Game 163 victory last season.

And the backstory gets even better from there.

A key part of the bourbon's inspiration comes from an attempt by Central Standard to get an actual authentic L flag from Wrigley Field – and not just any L flag, but the one that flew over the Cubs' stadium after the Brewers claimed the NL Central title over Chicago in Game 163. Distillery co-founders Evan Hughes and Pat McQuillan would then fly the flag in their tasting room the night before the teams' first battle of the 2019 season on Thursday.

The distillery passed along a letter ... and unsurprisingly the idea was declined.

Though dealing away bragging rights to one's rival is admittedly not the best idea, there was an actual decent reason for the Cubs brass to sell the flag to Central Standard: Hughes and McQuillan offered $1,000 to Chicago Cubs Charities for the legendary L – double what the team gets for charity by selling one of its W flags.

"We thought offering them double and paying to replace their current L flag was a no-brainer opportunity to do some good, help a great cause and celebrate the rivalry between our two cities," Hughes notes in a release.

Plus, after flying the L at Central Standard, the distillery planned to continue using the symbol of a good day at the ballpark to do good in the world.

"We planned to donate the L flag to the Brewers Community Foundation. We had hoped that they’d auction it off to further pay it forward, or add it to their archives, or who knows, maybe even send it to Cooperstown for displaying in the hall of fame," adds Hughes in the release, which also includes a copy of the letter Central Standard sent the Cubs. 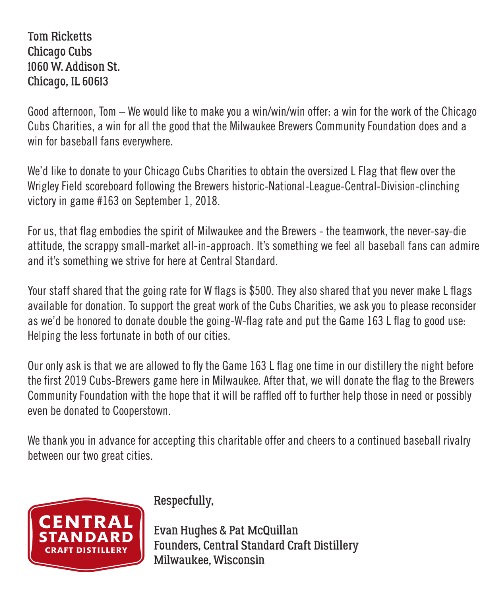 Alas, even with the charitable angle, the Cubs passed. But Hughes and McQuillan still got an L flag to fly in their tasting room – a replica, but still a fine tribute to the best possible result found on a baseball field: a Cubs loss. And most importantly, the distillers still made their charitable donation, passing along the planned $1,000 to the Brewers Community Foundation.

And after all that, we get a special bourbon – again, on sale for $30 a bottle beginning Thursday at the Union Room at Central Standard as long as supplies last. Sounds like a win for everybody ... except for the Cubs. But considering how their season's started, they're probably used to that.

The Brewers' Corbin Burnes is your 2021 NL Cy Young winner