His name is "Tank," and he drives a big semi - one of 30 that will be in Milwaukee for Kenny Chesney's show at Miller Park Saturday night. He took my Uber ride and provided a little look into what it takes to keep a show like this one the road.

Being an Uber driver in Milwaukee is a one-of-a-kind experience that lets Dave Begel meet some of the most interesting people, residents as well as visitors to the city. Everybody has a story and Tales of the Road will highlight some of those stories. The stories have been edited into quotes from riders. Some names have been omitted or changed to preserve the privacy of his passengers.

The Uber ping called to pick up a guy Downtown. The name was "Tank."

Once I set eyes on him, it was readily apparent why he had the nickname: tall, big and with tats all over the place. A wide smile and a little bitty wave of his hand, and I stopped.

He climbed into the backseat and told me that we were headed to the parking lot at Miller Park. We launched into our little version of Milwaukee Talks.

There’s no game at Miller Park tonight. Why are you going to the parking lot?

I drive a truck for Kenny Chesney’s show.

Cool. So you park in the lot?

We all do. There’s going to be a line of trucks there.

Yep. When we do a stadium show, it’s about 30 trucks. Big trucks. All semis. When we do an amphitheater, it’s only about 20 or 25. He’s in some place called Cadott (Country Fest in Chippewa County, northwest Wisconsin) Friday and then we’ll all be here for the show Saturday night.

What are you carrying around?

Well, I drive a semi, and this one has sound gear. I’m not the only one with sound. Our trucks are packed with sound and video and everything else it takes to put on a show like this. 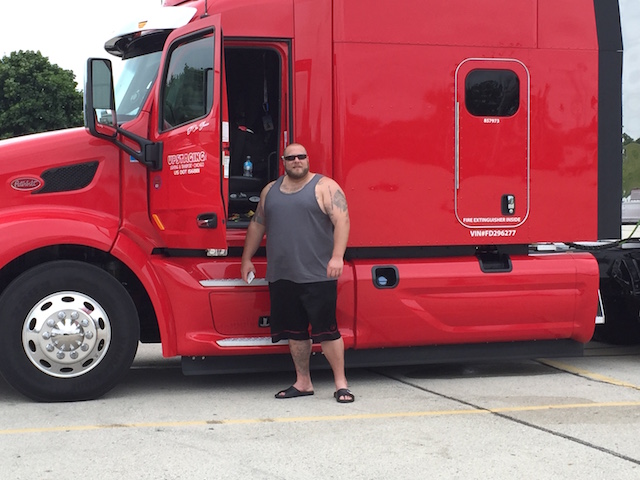 How long have you been doing this?

About four years. I’ve driven for Metallica and U2, all over the country. I work for a company that moves all these shows around. I put on maybe 300,000 miles a year. For example, after the show Saturday we’ll load up and head out. I’ll be on the road about 3 or 4 a.m. and on my way to Virginia Beach. We play there Thursday and then to Philly on Saturday night.

How many guys does it take to keep this show on the road? And it must be good for the hotel business.

I have no idea. There’s a lot of us. And most of the drivers just sleep in their trucks. We sleep during the days pretty much because we do so much of our work at night. Especially driving. We really pound it when we’re on the road. My truck is off by itself here, because I like it to be on a flat piece of ground. Otherwise I kind of roll downhill when I’m sleeping, and I don’t like that.

Do you drive in, like, a caravan or something?

Nope. When we load up, we take off. Maybe one or two guys may road together, but most of us just get going and keep going until we get where we’re supposed to be. Then we just do it all over again.

It must be glamorous, meeting all those stars.

Not really. Sometimes you may see them around. But I’ve never met Kenny. Or the band. Or the opening act. Or the road manager. Mainly I meet some of the other drivers and some of the crew. It might sound glamorous, but there's not much glamour. We bring all our own guys but also hire some local guys to help set up and break the whole thing down. It’s kind of like moving a little city.

Don’t you have any free time?

Some. Like I just went to a gym Downtown. I worked out. Gotta keep up your strength for this job. Gotta eat. Gotta work out. Gotta sleep.

Tank then slid out of the car and walked to his truck before turning and waving. Time for a nap.