For hundreds of years, chimney sweeps have provided a necessary and important service to society. In 1981, Jeff Schmittinger started working in the field and today he operates Wisconsin Chimney Technicians in Waukesha.

Prior to becoming a chimney sweep – yes, that term is still acceptable today – Schmittinger worked as a volunteer fire fighter in North Prairie, a village in Waukesha County. At the time, he also worked for Kohl’s Food Stores, but when the company started to close locations in the late ‘70s, Schmittinger says he "saw the writing on the wall" and pondered new careers.

One day, while reading "Firehouse Magazine," Schmittinger discovered there was a need for chimney sweeps. Because of the oil embargo, people had returned to using wood to heat or partially heat their homes and many fireplaces were suddenly in need of cleaning and repair.

The profession felt like a good fit, and so Schmittinger started a chimney sweep and repair business.

About a decade later, in 1993, Schmittinger decided to cold call the White House and offer his chimney sweep services.

"I never thought they would take me up on it, but lo and behold, they did," says Schmittinger.

Shortly after making the call, Schmittinger made his first journey to the White House with a team of chimney sweeps – some of whom already worked for Schmittinger – and others he recruited from around the country.

Since then, Schmittinger and a rotating group of chimney sweeps have gone to the White House every few years. There are 35 fireplaces on site and it takes them about three days to get the job done.

"If someone told me when I started in this business that some day I’d be standing on the roof of the White House, I would have thought they were nuts," says Schmittinger.

During his visits to the president’s mansion, Schmittinger saw President Clinton from a distance and had multiple conversations with President George W. Bush. One time, President Bush spent 45 minutes speaking with the chimney sweeps because many of them were veterans.

"Whether you like his politics or not, he’s a kind human being," says Schmittinger.

During the Obama administration, Schmittinger’s services were not needed as often.

"The Obamas don’t burn much; they aren’t (fireplace) burners," he says. "You would think, coming from Chicago, they would be."

Schmittinger planned on returning to the White House to get the chimneys and fireplaces ready for the Trump family. In the meantime, he sent a Usinger’s holiday sausage box to the White House staff, as he had done every December.

"Everyone out there has always bent over backwards to be nice to us," says Schmittinger. "You might think being that we are chimney sweeps they would think they are above us, but we have never gotten that impression."

Schmittinger and his family have been invited to numerous White House events, including private tours, an Easter egg roll and to view Christmas decorations.

"Some rewards of my job aren’t in the bank," he says. "Some things are worth more than that."

Locally, Schmittinger’s company cleans and repairs about 20 chimneys or wood stoves a week. Although the profession started in the 16th century, a portion of the job has stayed the same.

"It’s a very old trade," says Schmittinger. "And today, part of it is done the old fashioned way and part of it has moved into current times."

In modern-day chimney sweeping,  the process includes use of a vacuum, but brooms – in a variety of different sizes - are still used, too. Today, chimney sweeps also use a video scanning system to inspect the inside of the chimney for built-up debris and cracks. They also wear respirators and don’t necessarily dress all in black like they did traditionally.

However, Schmittinger still drives around with a top hat in his car – part of the chimney sweep’s attire many years ago – and he sometimes wears it to a job just for fun. Historically, chimney sweeps wore top hats because, in some countries, they were part of the lower class and they thought if they dressed up, it would improve their status.

On the flip side, in some countries like Germany, it was believed that seeing a chimney sweep brought good luck.

"In Germany, the chimney sweep is right under God," says Schmittinger.

Schmittinger says the holiday season is his favorite time of year to be a chimney sweep because of the association with Santa. Sometimes, while at a job, children will reference the Jolly Guy and, after checking in with their parents, Schmittinger will give them a scrap of red cloth.

"I’ll say something to them like, ‘Oh, what do we have here? Looks like Santa tore his coat coming down your chimney,’" says Schmittinger. "This usually spreads a lot of joy." 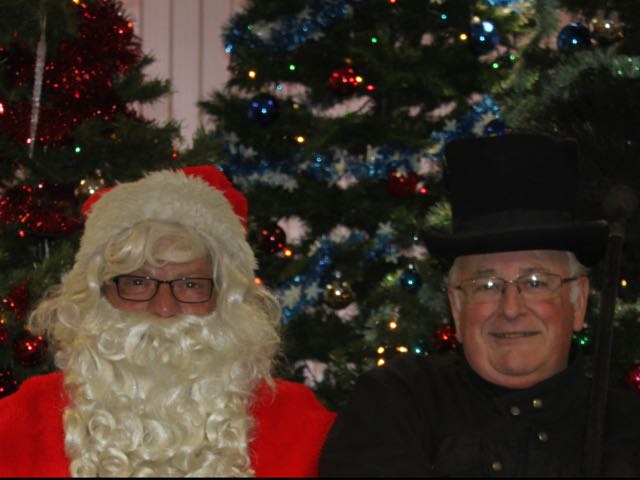 Chimney sweeper Jeff Schmittinger and Santa have stuff in common.