What happens when you take one of the season's most traditional pieces of decor and turn it completely on its head? Just ask Karl Kopp and the folks at Elsa's on the Park. After all, they've been displaying some of the most creative Christmas trees in the restaurant every year since 1979.

What happens when you take one of the season’s most traditional pieces of decor and turn it completely on its head?

Just ask Karl Kopp and the folks at Elsa’s on the Park. After all, they’ve been displaying some of the most creative – and non-traditional – Christmas trees in the restaurant every year since 1979.

The trees, which are put up around the week of Thanksgiving every year (and remain on display through Jan. 1), have been fashioned by a number of artists. The tradition began with Larry Mercure, who designed both the restaurant and the restaurant’s first tree in 1979. Years later, Janis Leonard took over the design. And, more recently, the trees have been created by Stewart Johnson and (now) his son Stewart Johnson, Jr.

But no matter who has been at the helm, the trees have each been unique, carefully planned and never traditional.

One year, the tree was made entirely of paper dollars. Another sported thousands of white feathers. Still another was made to look as if it was carved from ice. And – maybe the most famous tree – was fashioned from hundreds of Barbie dolls.

In 2017, the tree featured 750 white light bulbs and one red bulb, each each of which was painstakingly soldered to a wire the connects to the circuit board that powered them. 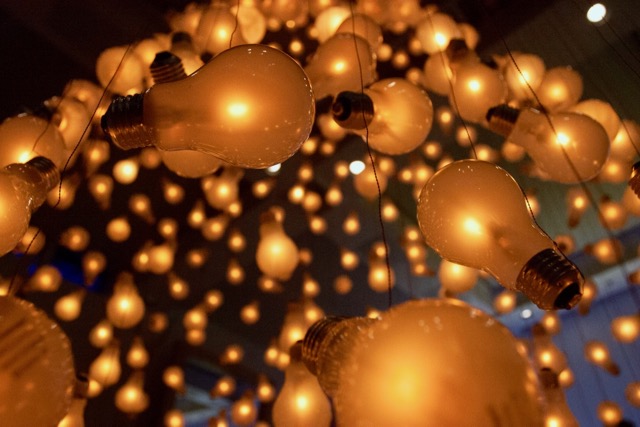 When asked where the inspiration came from for the uniquely artful trees, Kopp chuckles. "Vodka," he replies with a grin, noting that the first tree was made of little bananas that were painted gold.

"They were hung on a fake green tree," he says. "And that sounds traditional, but when you saw it … it wasn’t traditional. Sometimes, when you hire a designer, there isn’t much discussion."

Kopp says there is oohing and ahhhing over some trees, such as one which was made entirely of pieces of wood that were cut into the shape of houses. It was one, he says that you "knew you’d get applause from all of the women."

But there are others that don’t elicit quite the same response.

Sometimes people will say to me: ‘Oh, my, well that’s interesting… ,’" he says. "And then you’d know that they didn’t like it."

Kopp says each tree is an intense investment of both time and money. Each year, he notes, a team puts in thousands of hours designing and executing the newest tree.

"One year, we had a tree made entirely from charcoal briquettes," notes Kopp. "And they had to drill individual holes in all of them. And when I say ‘they,’ I don’t know who they were ... but it wasn’t me."

That tree made a second appearance in 2018.

Most of the trees, he says, alternate between locations. One year, a tree is displayed at Elsa’s. The next it might be at one of Kopp's restaurants in Arizona: Hanny’s or AZ/88. And that means, when the season is over, each tree is painstakingly dismantled, packed into boxes, and put into storage.

One of a kind

But, occasionally, a tree appears just once and never again.

"When the gas prices were going up really high, we did one with gas cans," says Kopp. "We bought new gas cans and had them crushed at Miller Compressing. They dropped these huge weights on them and crushed them. But, after that year, it didn’t seem timely anymore." 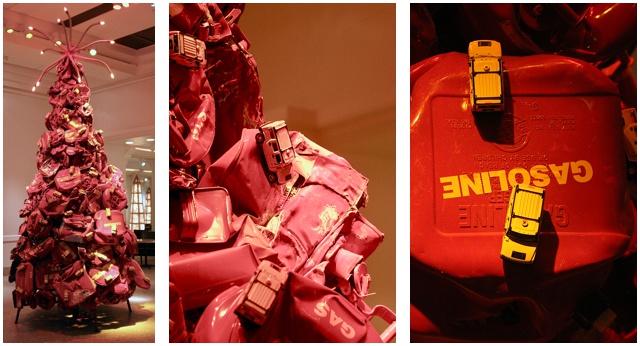 "The ones we like, and repeat, are those that are more timeless," says Kopp "But, so many are done once, and that’s enough."

Elsa’s general manager Chris Collins says he’s been around long enough that he’s seen his fair share of trees. One of his favorites was displayed in 2012 (and returned, somewhat improved, for 2019). 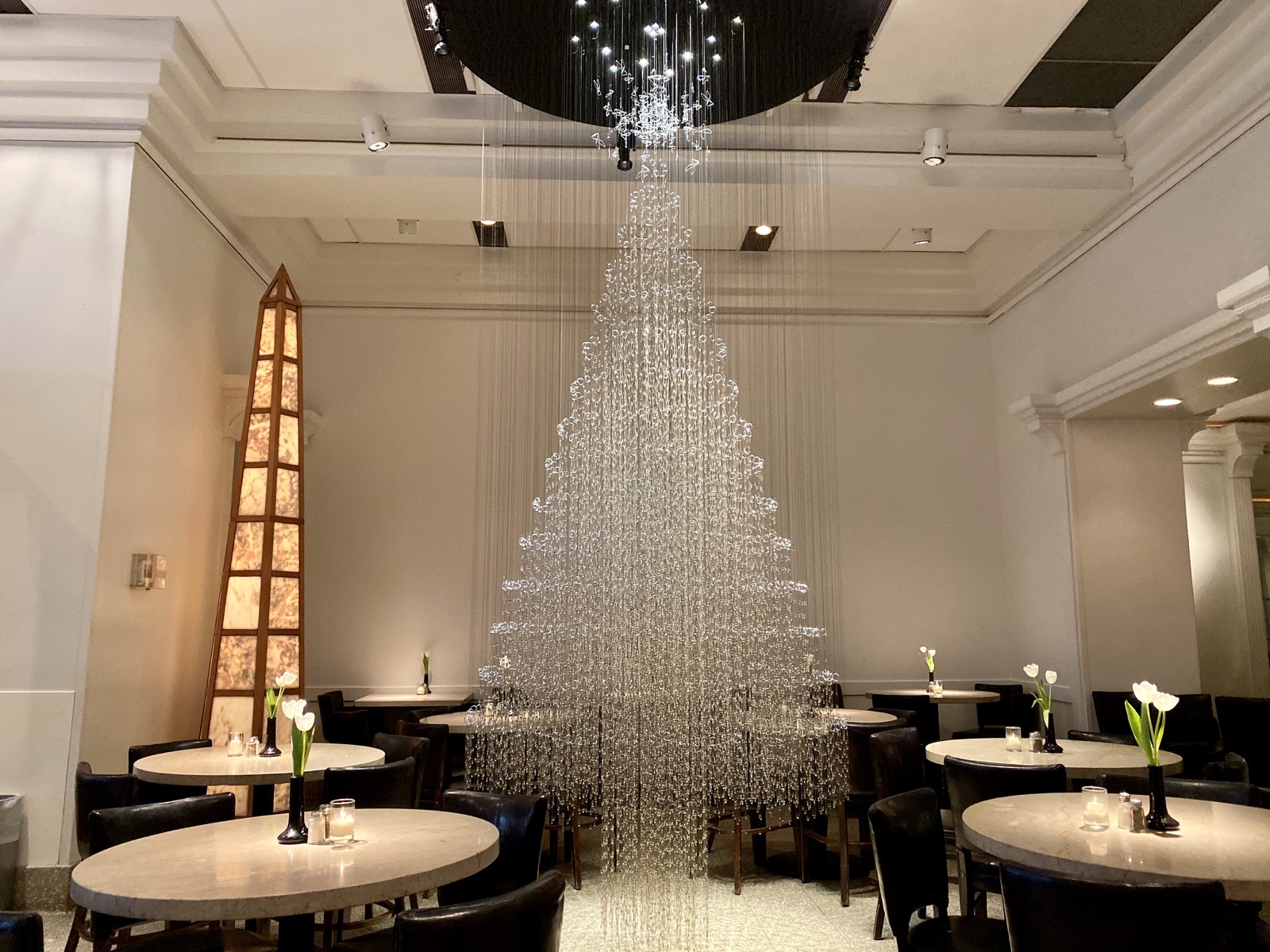 "It was a tree comprised of over 18,000 safety pins," he says. "I remember that Karl wanted to leave all the safety pins open so the kids wouldn’t touch it," he adds with a chuckle. 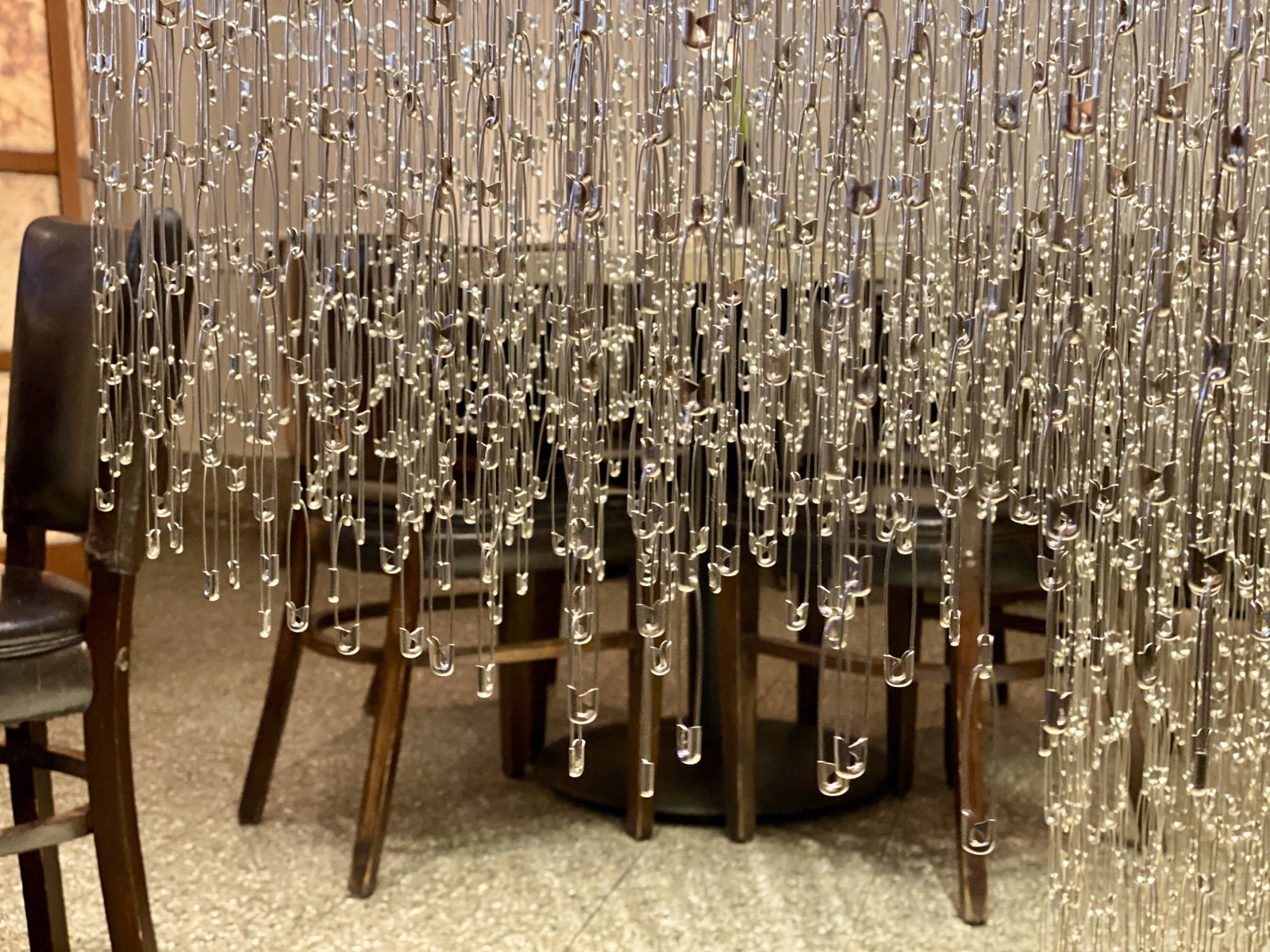 He also remembers the cut glass tree, which was as impressive to create as it was to admire.

"It was made of all these little 1/8-inch panes of glass," he says. "They took each one and chipped it by hand on all of its sides. And then they glued them together. It was beautiful, but there’s no way you could have paid someone enough to do it."

Yet another tree displayed colored glass rocks that were mounted on a plexiglass frame. "That one hit everyone, from kids to adults," Collins notes, stating that another favorite was the "plasma tree" which featured bulbs that, when touched, looked as if they contained lightning.

Despite the work and resources involved, Kopp says if he had it all to do over again, he’d do the trees.

"Once you start doing it, it becomes an obligation," he says. "But there’s always excitement in seeing the designs, putting it up, and the little accidents that happen along the way."

When we asked if the Barbie doll tree would ever make another appearance, Kopp shook his head.

"Everybody wants us to do that tree again," he says. "But it’s not going to happen."