CHVRCHES answers its fans' prayers with a stellar Summerfest set

Some may have wondered if it was worth seeing the same band twice in less than a calendar year. But CHVRCHES's Tuesday night Summerfest show wasn't some lazy rerun or shot-for-shot remake. No, it was the rare sequel that outdid its predecessor.

Now that's what I'm talking about.

When Scottish synth pop trio CHVRCHES last dropped by Milwaukee – just last October at the Riverside – it marked my first chance to finally see one of my favorite bands live. (Their last visit came in 2016. Before then, they'd just played a small pre-breakout lobby show at the Riverside.) And it was good ... but just good.

Perhaps it was the sporadically muddy mix or the setlist that suffered a significant electricity outage near the middle – or merely me putting this long-awaited show on a pedestal that only a mid-set cancer cure announcement could live up to, but I remembered not leaving the venue with the buzz – the excitement, thrill and pure lifted sensation – of having seen a beloved band play great in front of my eyes. Instead, it was just another solid, respectable show.

Tuesday night's Summerfest set at the Miller Lite Oasis, however, delivered that exact buzz. Even if the set list was shorter – and the atmosphere was 1,000 percent stickier and sweatier in the humid summer air – CHVRCHES put on the kind of show that made new fans and sent old fans out hummingly happy, riding the high of seeing one's top band play near the top of its capabilities. 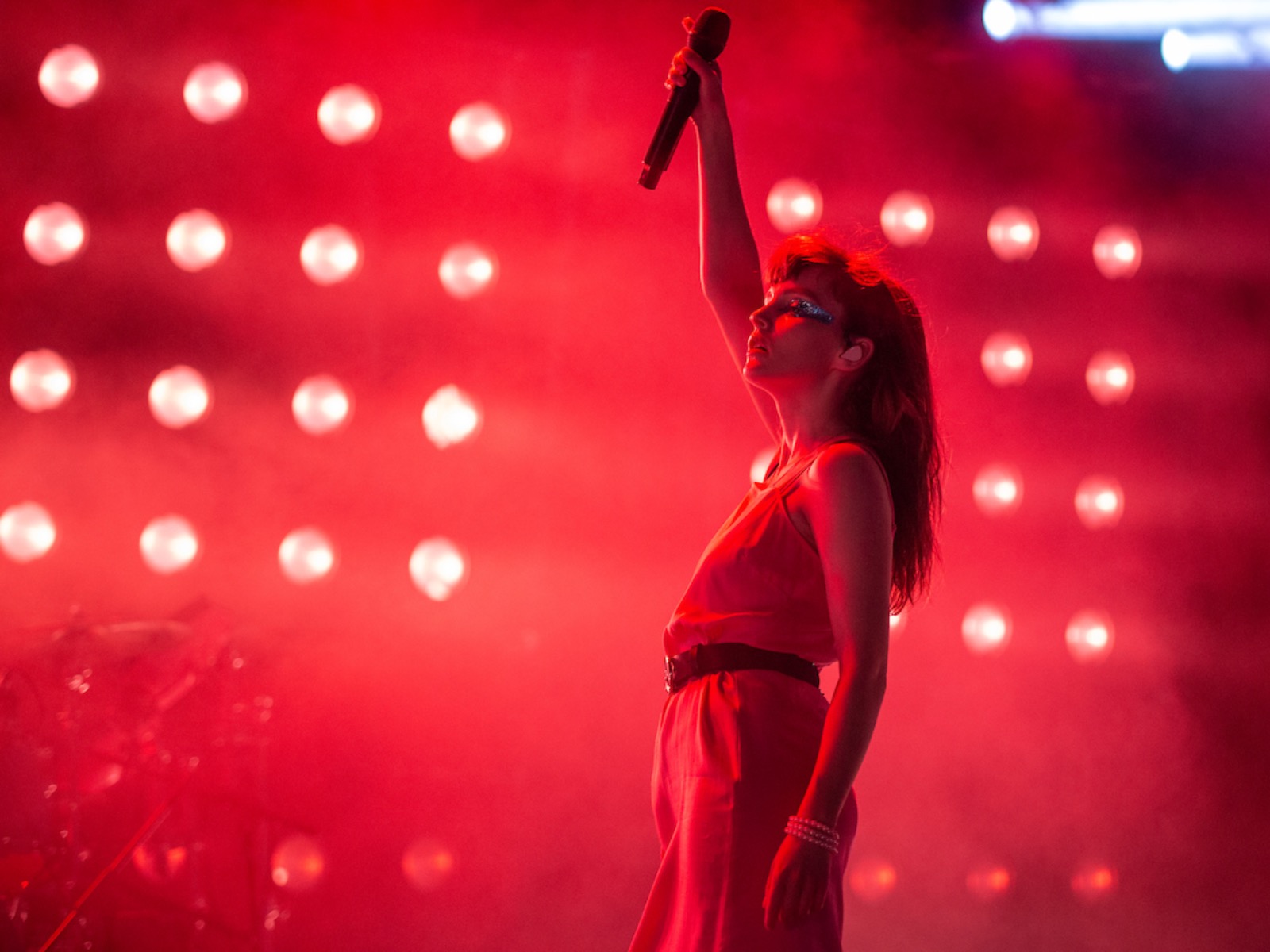 Although the set landed on the slighter side for a Summerfest headliner act, coming in at a briskly-paced and fully packed 70-75 minutes, the truncated time (though only two songs less) was worth the tighter, all killer no filler set. Gone was the energy-deficient midsection, honed to just one selection from the bouncy, twitchy Martin Doherty on lead vocals ("Under the Tide") and subbing out the sad buzzkill ballad "Really Gone" for the much more energetic and festival approved "Never Ending Circles" off the group's second album, "Every Open Eye" – an especially exciting addition since it's not a regular part of their tour's rotation, last played live all the way back in April.

It wasn't just the setlist that felt tighter Tuesday night as compared to the band's last visit. The audio mix, rocky in places at the Riverside show, also sounded much more consistent, with each song – from the crunchy synth beats of "We Sink" or the band's first mega-hit "The Mother We Share" to the anthemic stomping sound of "Miracle" and the gloriously building then beat-dropping rave of "Clearest Blue" – capturing all of the intricate arrangements from the band's three albums and balancing the bass and poppy synth with lead singer Lauren Mayberry's tartly searing, soaring vocals, cutting through the night like sweet barbed wire. 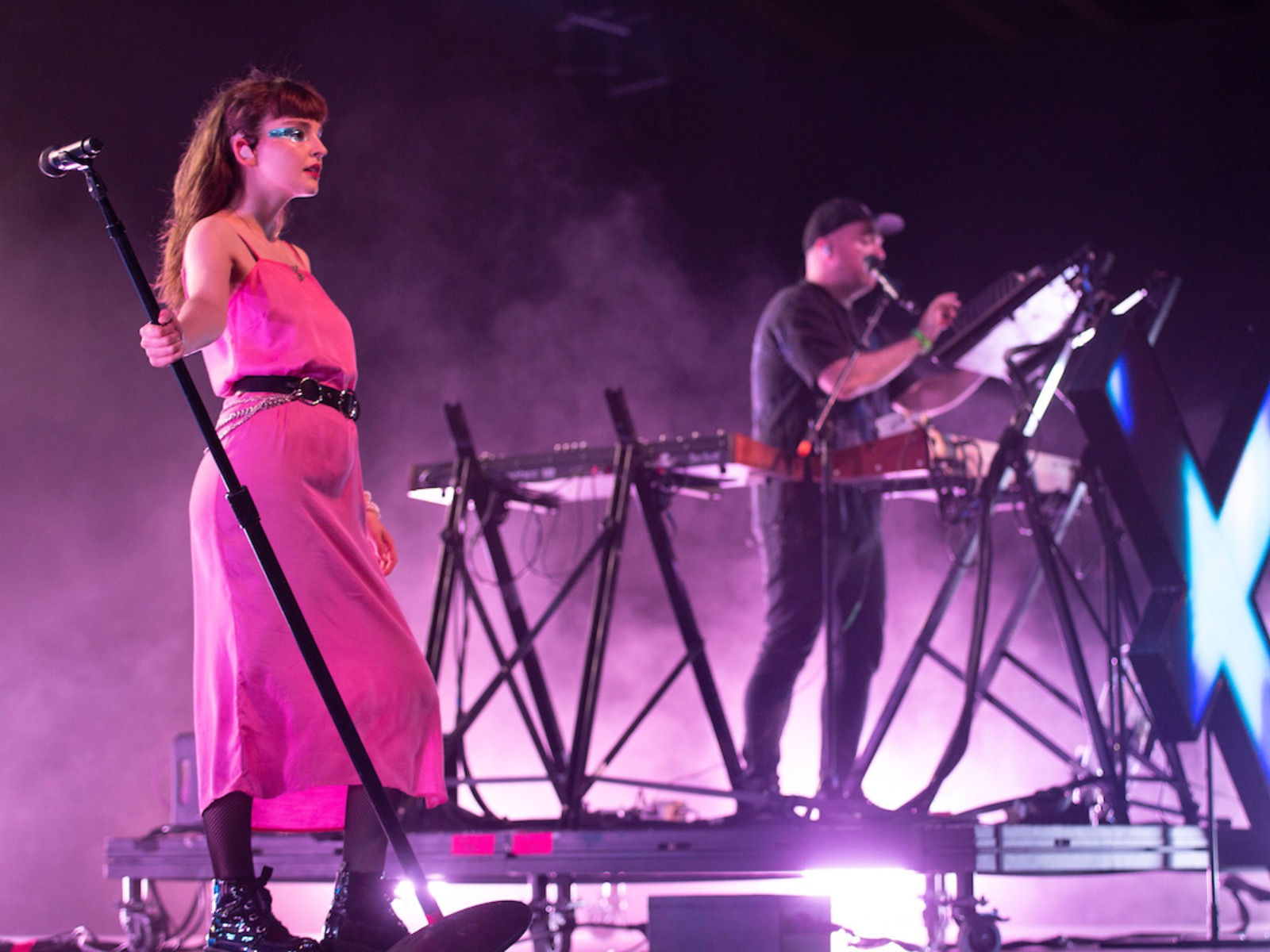 Even the ethereal "Science/Visions," always a risk to fall into a prog trance dirge even on the album, sounded bigger, more open and pleasantly lighter on its feet, providing a different angle to CHVRCHES's sound, a new taste for one's musical palate, as opposed to feeling like a dull intermission.

As tight as the show was, however, jetting through hits, Mayberry and company still kept the show loose, fun and personable. Her goofy, rapid-fire "two shows in one" comedic banter in between songs, jokingly introduced back in October, played just as amusing in the open air and showed no signs of suffering heat exhaustion. From gleefully telling the crowd about a bug that zipped up her nose before "Graffiti," congratulating the U.S. on their hard-earned World Cup win earlier in the day or sharing with the class their behind-the-scenes "secret microphone" chats about the "flying chairs" soaring behind the two-thirds filled Oasis audience (hope you got your ride on the Skyglider, Doherty!), her delightful dialogue added a perfect burst of entertainment in between tunes while also never sounding like canned or reheated material.

Even coming back less than a year since their last gig, Tuesday's show felt like a unique and different night, not a retread just this time outdoors.

During the show, Mayberry confided in the crowd that the hardest part of touring isn't getting sick because of the grind or anything else: It's being tiny, sometimes battling their own bass trying to stay standing. But while she may stand at just 5-2, she's a massive, mighty performer with a huge on-stage personality. Decked out once again in her signature "Black Swan" meets Bowie eye makeup, she marched, spun, scowled, sliced necks, head-banged and posed triumphantly like a diva punk queen across the stage with commanding, fierce and feisty vigor – all while her voice cut through the humid night with the band's unsparing, deliciously biting lyrics. 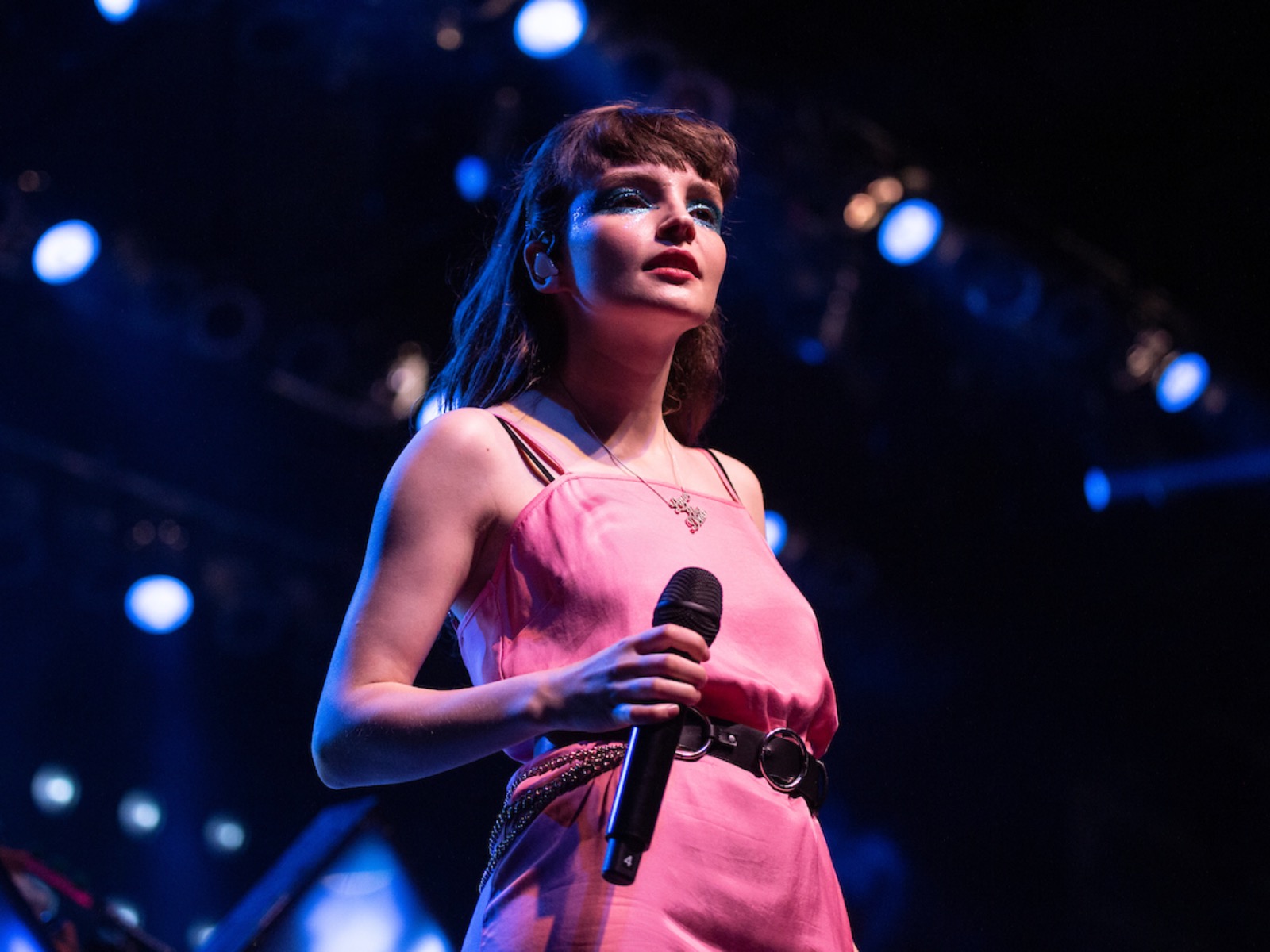 By the night's final batch of numbers – a solid lineup of the band's biggest bangers, including the dance party of "Clearest Blue," CHVRCHES's biggest hit "The Mother We Share" and the chanting "Never Say Die" – Mayberry was brought to her knees. Considering her captivating performance, the audience was on the same page.

Some may have wondered if it was worth seeing the same band twice in less than a calendar year, if you'd just get the same show just outdoors and surrounded by underdressed teens. But Tuesday night wasn't some lazy rerun or shot-for-shot remake. No, it was the rare sequel that outdid its predecessor – and turned this fan back into a full believer.