Hearts and minds throughout the nation and the globe were with those who lost their lives and those who lost loved ones in Orlando. On Monday afternoon, City Hall joined in paying tribute and showing love, hanging a large pride flag from the building.

Hearts and minds throughout the nation and the entire globe were with those who lost their lives and those who lost loved ones in this past weekend's terrorist attack at the Pulse gay nightclub in Orlando. Many came out to Milwaukee's Pride Parade on Sunday to pay tribute and to show solidarity with the LGBTQ community.

On Monday afternoon, City Hall joined in paying tribute and showing love, as well, hanging a large pride flag from the building. 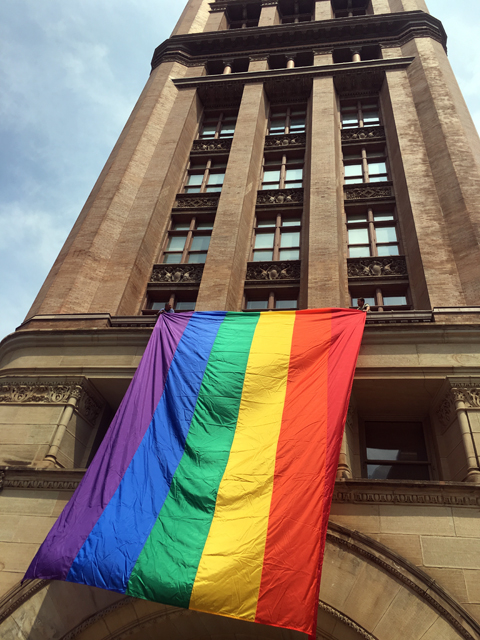 The flag will hang from City Hall through Thursday. At the same time, flags across Milwaukee – and the country – were flown at half-staff.

City Hall will also host a vigil in remembrance of the Orlando victims tonight at 7 p.m. at the south end – the Water and Wells Street entrance – of the building. In case of inclement weather, the vigil will be moved into the City Hall rotunda.