Bill Clinton's 1994 crime bill, one that's caused much recent fervor on the campaign trail, was not perfect. However, it also wasn't a racist evil, either. A lot of it made sense, and it was a compromise bill responding to a very real problem.

It’s now in vogue to hate on Clinton’s crime bill. A testy Bill has started scolding protesters. The man once called the "first black president" by Toni Morrison probably never thought he’d be blamed for destroying black communities. Meanwhile, Joe Biden has doubled down, saying he was "not at all" ashamed of the 1994 crime bill, which is being simplistically blamed for the nation’s mass incarceration rate.

American police have become the enemy, and if you want more of them on the streets – or support locking up criminals, including those who victimize African-Americans or violent, repeat offenders – you’re racist. Everyone doesn’t think that, of course, but it seems like some people do. Frankly, the left is often incoherent on this point; liberal politicians like Mayor Tom Barrett give angry press conferences about the weekend’s shootings, but then those on the left decry incarceration meant to address them.

The truth is simply a lot more complicated. Bill Clinton’s 1994 crime bill was not perfect. However, it also wasn’t a racist evil, either. A lot of it made sense, and it was a compromise bill responding to a very real problem.

Furthermore, you could argue that Bill Clinton’s crime bill may have helped save lives, black and otherwise; violent crime in America plummeted after it passed (although it was already starting to tick downward).

The bill passed on the heels of the nation’s homicide rates spiking upward in the early 1990s, crimes that sometimes had a disproportionate effect on African-Americans. The same pattern was seen in Milwaukee in the early 1990s, where homicide hit its record high as crack cocaine arrived. According to The Atlantic magazine, the country’s violent crime rate jumped 25 percent in the 12 years before 1992.

After the bill? Crime dropped. Here’s a chart from the FBI that shows part of the mid-1990s drop: 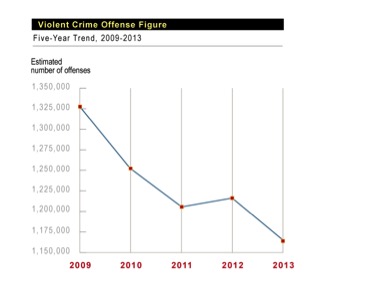 Here are two charts I made with federal Bureau of Justice Statistics on the nation’s murder numbers and violent crime figures. The stats go through 2012, but that’s 18 years after Bill’s crime bill: 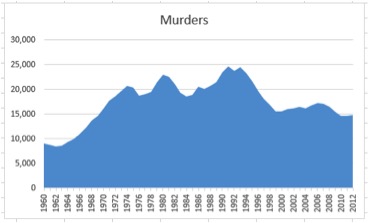 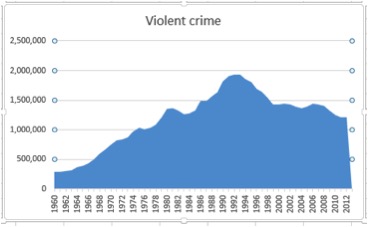 Bill’s crime bill was a response to the nation’s worst crime years. Granted, crime has started to turn upward again, but there were years of steady decreases after his bill.

Crime is a very complicated problem; there’s no way you can or should assign a single cause to it – or solution, of course. Crime is related to birth cohorts, poverty, policing strategies, availability of firearms, breakdown of the family, all kinds of things. We can’t say Bill’s crime bill caused the steady crime drops for sure, but we can’t rule it out as contributing, either (maybe his good economy played a role too, but he’s not getting much credit for how that improved people’s lives).

Let’s revisit some of the things Bill’s crime bill did, according to The New York Times and other news sources:

Yet, now the Clintons are on the defensive. Sort of. "I don’t know how you would characterize the gang leaders who got 13-year-old kids hopped up on crack and sent them out onto the street to murder other African-American children," Bill Clinton snapped at a protester recently. "Maybe you thought they were good citizens. You are defending the people who kill the lives you say matter."

Strongly worded, but he has a point. His crime bill was a response in part to black victimization. What would have been a better response to the wave of violence that hit America in the early 1990s? It strikes me that the crime bill tried to tackle the issue from multiple directions.

That doesn’t mean that we shouldn’t consider the deleterious effects of mass incarceration (while stopping short of blaming Bill Clinton; according to The New York Times, the nation’s rising incarceration rate was already on the upswing before the crime bill, a result due in part to the war on drugs). It also doesn’t mean that we shouldn’t restudy the drug "war" or consider all of the nuances in Bill’s bill.

One chart in The New York Times, which lines up the incarceration and crime trends next to each other, shows that, as incarceration continued to rise, crime dropped. That doesn’t mean that one caused the other, of course (again, I think both are very complicated), but it is striking when you see them side-by-side.

Perhaps the cost of non-incarceration and fewer police on the streets is more social disorder and crime. Is that a trade-off people are willing to accept?

Yes, the better solution would be to tackle the thorny issues that lead to crime in the first place, things like poverty rates and fractured families. It’s also possible, then, that less incarceration and police will just lead to more victimization, as the underlying causes of crime remain unaddressed.

As for the war on drugs and disparities in how things like crack and powder cocaine are treated, it’s a good idea for our society to readdress how we treat those things. However, if we don’t legalize drugs to get the profit margin and turf battles out, you’re going to continue to have violence associated with the drug trade. Society must address that violence. A middle ground – with the turf battles intact but incarceration off the table more – seems very dangerous. The drug trade’s correlation to violence is now being downplayed in the public conversation.

Statistics such as those in The New York Times showing six percent of all black men in their 30s were in prison in 2014 are indeed shocking and demanding of community action, too. Equally awful is the number of black men who die of homicide each year. However, blaming Bill Clinton is an incredibly unfair and simplistic answer.

When the crime bill passed, reported The New York Times, 58 percent of non-white voters supported the crime bill, a higher percentage than white voters. A contingent of African-American mayors urged Clinton to pass it, according to The Atlantic. Bernie Sanders voted for it, by the way.

I don’t think it was perfect. I support mandatory minimums for some offenses (such as firearms), but I don’t like three-strikes-you’re-out mandatory life terms, which can be overly harsh. I oppose the death penalty in all circumstances. One other piece of the bill that wasn’t great: It stopped prisoners from getting student loans. So I’m not arguing Bill’s crime bill did everything right.

It also didn’t do everything wrong. It attempted to strike a balance between alternatives to incarceration for some while cracking down harder on repeat and violent offenders.