Coakley Brothers has tapped Brooklyn-based artist Tom Fruin to create a mosaic sculpture version of the water tower to be installed atop its seven-story headquarters that sits across from the Iron Horse Hotel on the roundabout at the south end of the 6th Street Viaduct.

Coakley Brothers, which this summer announced and began a $6 million renovation projecct on its Walker's Point headquarters at 400 S. 5th St., has unveiled a rendering of a plan to bring back the building's rooftop water tower, sort of.

Coakley has tapped Brooklyn-based artist Tom Fruin to create a mosaic sculpture version of the water tower to be installed atop the seven-story building that sits across from the Iron Horse Hotel on the roundabout at the south end of the 6th Street Viaduct.

The design, shaped like a traditional wooden rooftop water tower used to regulate pressure in taller old buildings, appears to be made out of stained glass. 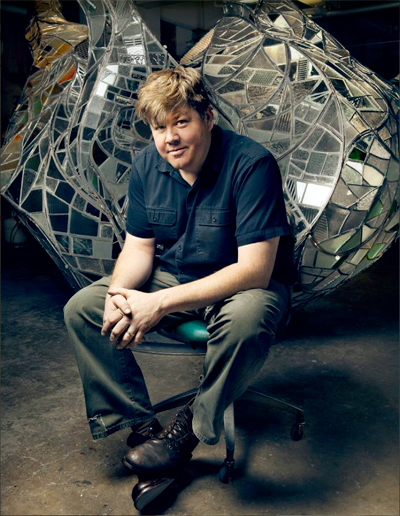 Its variegated and bright design will certainly be eye-catching and will leap out especially at folks on the high-rise and the Hoan bridges. The colors will also likely have a prismatic effect, too, on sunny days.

The kaleidoscopic work – part of Fruin's ongoing "Icon" series – will be made of Plexiglass, plastic and steel, and will sit atop the base that remains from the building's original water tower, which was removed.

Coakley owner Peggy Coakley learned of Fruin's work on a visit to Brooklyn, where West Elm – which is opening a showroom for its business interiors division in the renovated Coakley building – is headquartered.

Fruin's water tower is atop the building at 20 Jay St. in the DUMBO neighborhood where West Elm makes its home. Another one is in nearby Brooklyn Bridge Park at 334 Furman St.

"My mouth dropped and I had my driver pull over to get a better look," Coakley said in a statement. "The beauty of the piece was striking. I immediately thought of our own water tower base on top of our building and the possibility of putting one of these on our rooftop for the city of Milwaukee. I knew I needed to find the artist and bring this home to Milwaukee."

The Coakley watertower art project extends Fruin’s internationally acclaimed Icon art series. Similar to Fruin’s previous artworks, the soaring sculpture will crown the building and feature salvaged plexiglass, plastic and steel arranged in a chromatic patchwork pattern. The inspired design provides a unique, kaleidoscopic adaptation of the water towers that heavily punctuated the American urban skyline throughout the 20th century, including at this Coakley Brothers headquarters.

In the statement, Coakley said she hopes "the public will see the sculpture as a symbol of pride for the city’s diverse and vibrant citizens and a symbol of how neighborhoods and cities can be progressive and forward-thinking, while still being true to their roots."

"Like the city, this piece is dynamic: a riot of color and vibrancy," explained Fruin. " In a way, the sculpture is inspired by the city. It’s a gift to the city. To have an opportunity to work at this size and scale is a dream come true.

"You'll get a glimpse of the water tower sculpture from nearby backyards and peaking out over factories — it'll brighten your commute when seen from the freeways."

The installation of the work requires approval from the city's Board of Zoning Appeals. The item is on the agenda for the committee's Sept. 14 meeting.

If it is approved, the water tower will be unveiled in what Coakley calls a "formal evening lighting event."