Wizardz are real, and they're making magical mocktails in Milwaukee

Spearheaded by local barista Sam Brown and business partner Chris Christen, Coffee Wizardz is a project that sits squarely in the center of the growing mocktail trend that's currently sweeping the nation.

"A wizard's power of Changing and Summoning can shake the balance of the world. It is dangerous, that power ... It must follow knowledge, and serve need." -- Ursula K. Le Guin, "A Wizard of Earthsea"

Wizards are in our midst. You're unlikely to find them donning pointy hats, wielding magical staffs or summoning the powers of the deep. But you will find them busily conjuring their powers to change folks’ attitudes about the world of mocktails.

Spearheaded by local barista Sam Brown and business partner Chris Christen, Coffee Wizardz is a project that sits squarely in the center of the growing mocktail trend that’s currently sweeping the nation.

"I feel like we’re evangelists for specialty coffee and tea … and mocktails," says Brown. "There are folks who don’t think they love the flavors in tea and people who don’t see much promise in mocktails. And we want to change all of that."

A post shared by Milwaukee Coffee Wizardz (@coffeewizardzmke) on Aug 5, 2018 at 8:07am PDT

In July, Coffee Wizardz also hosted a pop-up at Discourse Coffee, the experimental cocktail bar in Door County that has made a splash with both locals and tourists alike.

And you’ll be seeing more from this pair of mixological conjurers in the coming months as they introduce their creations to the city at a variety of events and pop-ups (including one coming up this weekend at Vennture Brew Co.; see details below). And, in keeping with their whimsical gamer-inspired name, they’ll be doing so in a fun, accessible fashion.

"We talk about quality and passion and going to great lengths to create a perfectly balanced beverage," notes Brown of the project. "But we’re not snobs. This is supposed to be fun. And it’s about giving people something that’s completely enjoyable to consume."

"I was tired of serving boring things," he says, " so it was fun to really get creative and make something really quality-driven that’s different and fun for guests."

Meanwhile Christen is an Indiana native and hospitality veteran who moved to Milwaukee to attend college. From there, he lived in numerous places, including Portland, Oregon; San Francisco, California; and Dublin, Ireland. Over the years, he says, he cultivated a career in the field of IT, but he says he’s always missed his work in the hospitality industry.

A meeting of the minds

The two friends, who both have ties to the Milwaukee music scene (Brown sidelines as a DJ and Christen is a musician), met years ago when they both lived in Riverwest. But they rekindled their friendship over creative cocktail drinks at Pilcrow Coffee.

"I’d been living in Dublin and I was pretty homesick," says Christen. "So I kept up with things at home on Instagram. When my wife and I decided to move back to Milwaukee and buy a house, literally the first place I went when I got off the plane was to Pilcrow … one, because I was jet-lagged, and two because I’d been suffering from FOMO for too long."

There he found Brown, who’d been busily creating new coffee drinks like Campfire, a beverage incorporating featuring Indulgence Chocolate, Storyteller espresso, Oberweiss milk and mesquite smoked marshmallows which were lit and smudged to create a campfire aroma. Garnished with graham crackers, the drink was reminiscent of s’mores.

Over time, Christen’s visits to the small cafe redoubled and Brown shared his vision to start a new kind of beverage business, one that showcased a variety of specialty coffees, teas and interesting botanicals in a new and interesting way.

"I used to be a bartender, and I’ve always been a tinkerer," notes Christen. "So when he mentioned this idea of capitalizing on the flavors of coffee or tea to make drinks, I really took an interest."

From there, Coffee Wizardz was born. The two have taken their work seriously, spending the bulk of their spare time conducting research and development.

"We both have other jobs, but right now this fills the void in between," notes Brown. "And it exercises our creative muscles."

Ideally, he says, the two would love to open a cafe of their own. But for now, it’s about introducing the idea to people in the Milwaukee area. That will take the shape of pop-ups, collaborations with restaurants, consulting and beverage service for events, including weddings and other celebrations. 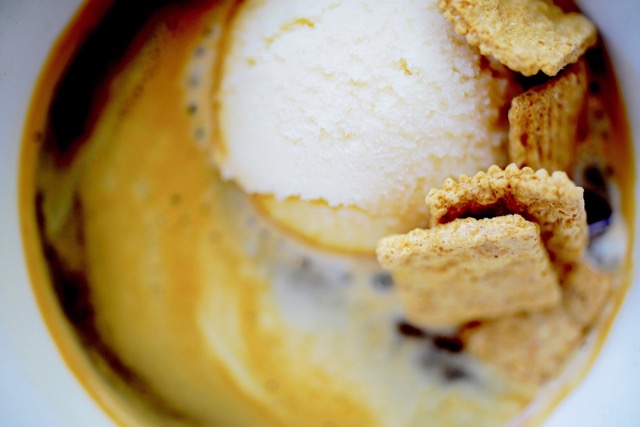 During the event, Brown and Christen will take over the brewery and cafe, serving up imaginative breakfast-inspired cocktails including cereal milk affogati (Italian dessert drinks featuring espresso and ice cream) and a pancake-inspired riff on the cortado, the Spanish coffee drink made with equal parts espresso and warm milk.

First up is this colorful beauty: an affogato made with Vennture’s Guji Ethiopian natural coffee paired with ice cream made from Fruity Pebbles cereal milk. 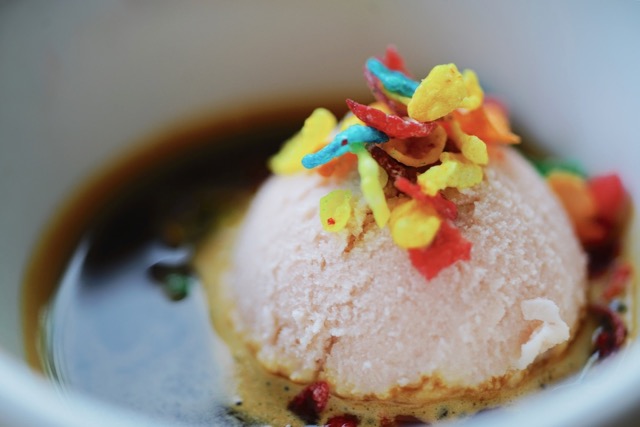 Another variation will feature El Quetzel, a Costa Rican Caturra from Ritual Coffee in San Francisco, paired with Golden Grahams ice cream. And yes, it tastes as delicious as it sounds.

They will also be introducing the iced "Shaketado," a riff on the cortado inspired by Christen’s love for peanut butter pancakes. It features maple syrup, powdered peanut butter, coffee, cream and a garnish of candied bacon.

We promise it will be magical.

Lori Fredrich Feb 19 Dining
Do This

Lori Fredrich Feb 17 Dining
Do This

Cozy up to Winter Dining Week at The Corners of Brookfield

Lori Fredrich Feb 12 Dining
Do This

Phun is brewing: Get ready for "Pho to Go" in Silver City