How Neiman Marcus' collard greens blew up the damn internet

The internet and its users were set ablaze in recent weeks as news spread that luxury retailer Neiman Marcus was selling trays of collard greens for $66. Posts about the offering went viral, inciting a new hashtag: #gentrifiedgreens. What can we learn from it all? Plenty.

The internet was set ablaze in recent weeks as news spread that luxury retailer Neiman Marcus was selling trays of collard greens for $66.

Built for the holiday table, the fully cooked greens, "seasoned with just the right amount of spices and bacon," arrive packed in four 12-ounce trays and were advertised as enough to feed eight to 10 guests. With shipping, the frozen, ready-to-reheat dish sold for $81.50.

To offer some perspective, a dinner portion of prepared greens from Chic Cafe Downtown costs $3.50. And you can have them delivered to you – even eight to 10 servings – for an added cost of about $3. A family-sized portion of collard greens from Nino's Southern Sides in Shorewood is $11.49.

The costly dish isn’t unusual for the retailer, which releases its Christmas Book each fall. The catalog is filled with myriad holiday gift ideas (mostly luxury items), including some particularly outrageously priced options, like a Cobalt Valkyrie-X Private Plane in rose gold for $1.5 million.

But the greens hit a nerve. Posts about the offering went viral, with many accusing the retailer of appropriating black culture, inciting a new hashtag: #gentrifiedgreens. 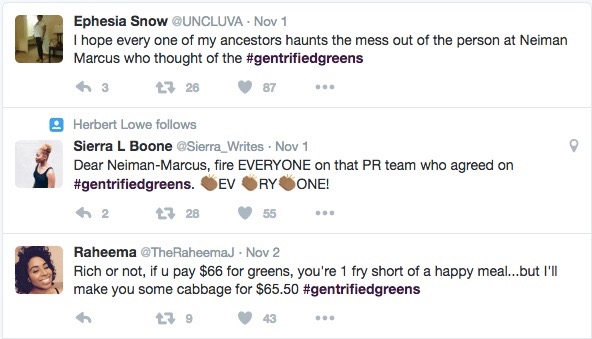 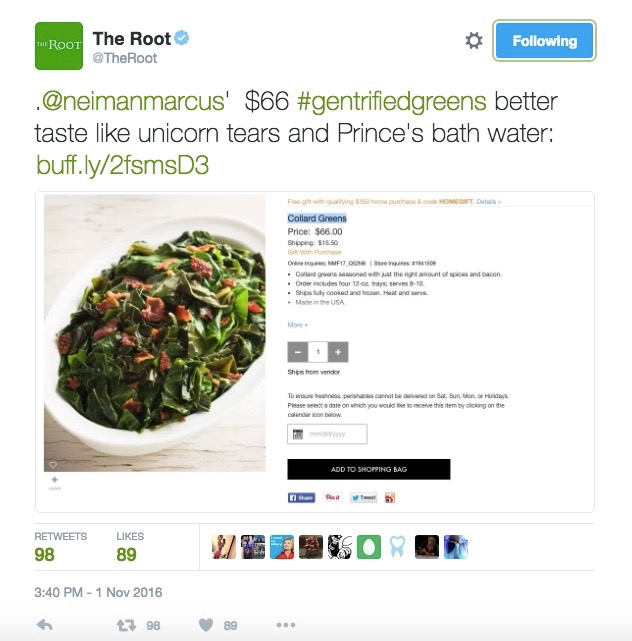 NPR covered it. The Boston Globe covered it. CBS News covered it. Here in the Midwest, Minneapolis-based soul food chefs were not amused. And neither were the folks at The Root.

"I can't even begin to imagine the conversation at the dinner table with my grandmother," said Yesha Callahan of The Root. "Do you know how many pounds of greens you could get for $66 at a grocery store? And who's cooking these greens? Is there some secret Neiman Marcus kitchen run by a grandmother or Paula Deen?"

They’ve also noted they plan to follow up with a review of the spendy greens, which gained even more traction this weekend when NM announced that the product was sold out. 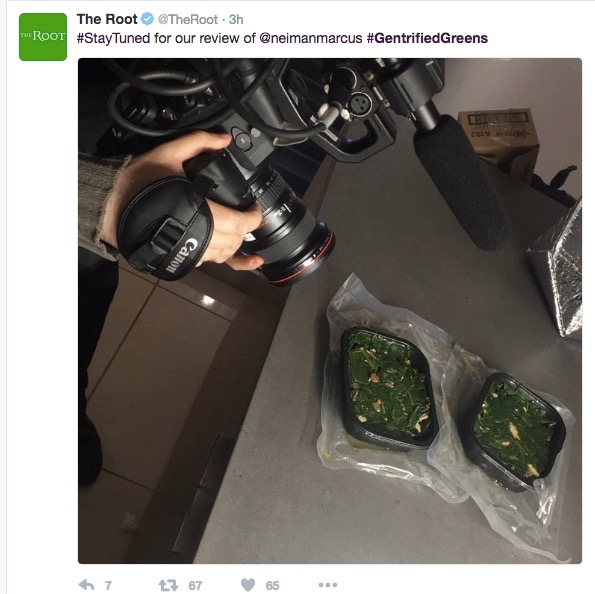 Regardless of your perspective, the sheer interest generated by the NM offering is worthy of note. Because in the end, there’s always an opportunity for conversation and understanding about why something as simple as collard greens strikes a chord for so many.

Is it right for someone to re-market a Southern soul food dish as a luxury item? Maybe more so, is it right for them to make a huge profit on food that owes its popularity largely to the the creativity of black Southerners?

Maybe none can speak to it more eloquently than food historian Michael Twitty, who wrote a piece about collard greens last year after Whole Foods published a recipe for the Southern staple without a reference to the dish’s cultural history.

In the end, his message resonates:

It should give us all some food for thought.

Controversy about tents / tipis heats up in Hubbard Park

The killer nobody wants to talk about