Community Corner: A trip to "Chicago" right in Greendale

I had the privilege to speak to Grace Yeager, the actress playing the name on everybody's lips, Roxie Hart, in "Chicago." Here is a glimpse of our intriguing conversation about community theater and getting the audience to root for murderers.

Community theater is a place of new discoveries and lifelong learning. It can introduce you to a new hobby, a new relationship or even a new life path. It contributes to the arts in a community and teaches many important skills such as teamwork, problem solving and confidence. This is Community Corner, an OnMilwaukee series that focuses on the outstanding work being done in the greater Milwaukee area's many community theaters.

A scorned lover is a character anyone should be cautious about getting to know. We’ve seen it time and time again both in fiction and in life: Boy meets girl, boy and girl fall in love, someone feels wronged, someone seeks revenge, chaos and violence ensue. But before Amy Dunn ruthlessly plotted against her cheating husband in "Gone Girl," and in a time where people had never heard of real life criminals like Jodi Arias, there was Roxie and Velma.

These merry murderesses at the center of "Chicago: The Musical" are unafraid to take matters of passion turned sour into their own hands. Both wronged in love (and both possessing an obsession with show business), they simultaneously fight for their freedom and a chance at the sacred spotlight, all of course while singing incredibly catchy songs. Fictional characters? Yes. Impossible to place in the real world? Absolutely not.

Such a story will be told in the capable hands of the cast and crew of Greendale Community Theatre’s (GCT) "Chicago" these upcoming two weekends. When it comes to community theater in Brew City, it really doesn’t get much better than Greendale Community Theatre. In every production I have had the honor of seeing here, it is evident that GCT and its members are passionate about every aspect of the arts, having a reputation of being at the leading edge of producing contemporary musical theater.

But Greendale Community Theatre is so much more than an exceptional performance company; they are an inspiration for charitable giving, putting good intentions into action at each and every performance. Beginning with their production "Rent" in 2009, GCT has established a tradition of giving back to the community. In the past six years, Greendale Community Theatre patrons have donated over $42,000 to local charities in the Milwaukee area, helping those less fortunate than most of us. While every production supports a different worthy cause, audience members attending "Chicago" this January support The Ethan Monson-Dupuis Opiate Recovery Fund by simply purchasing a ticket.

I had the privilege to speak to Grace Yeager, the actress playing the name on everybody’s lips, Roxie Hart, in "Chicago." Here is a glimpse of our intriguing conversation: 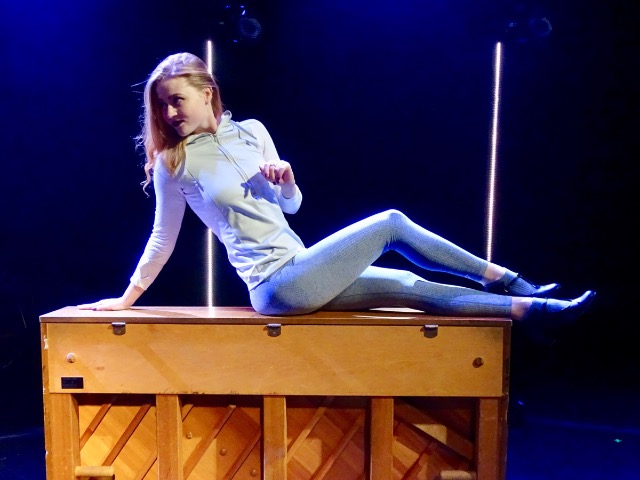 OnMilwaukee: Tell me about your background as an actress in the Milwaukee area.

Grace Yeager: I graduated with a BFA in musical theater from UW-Milwaukee, so I performed in many musicals as well as straight plays and dance showcases at UWM. I had my first internship with In Tandem Theatre for their production of "Carnival." Otherwise I am fairly new to the Milwaukee theater scene outside of college.

How competitive is the audition process for a show as beloved as this and with a theater company as respected as this?

I knew right away I wanted to audition because not only is "Chicago" an amazing musical, but I had heard from so many friends and colleagues that GCT is absolutely incredible to work with. The audition process, on the other hand, was unlike any other I had ever done before because I was in New York at the time and did the initial audition, callbacks and dance audition solely by video submission.

I can only imagine that getting into character to play a fame hungry murderess is exciting.

It's always important to keep in mind that when getting into character, especially a villainous one, the villain doesn't see him or herself in that light. Roxie believes she is just doing what is absolutely necessary to get out of prison in order to get her shot at fame.

What is it about the story itself – and Greendale's interpretation of the story – that will make audience members root for Velma and Roxie, women who would be considered villains in the real world because of their crimes?

This has been quite the topic of discussion between some castmates and me. It’s very thought-provoking as there is no love interest, and this show is not about family. It is about two women who have committed really unspeakable crimes and yet, by the end of the show, you, as an audience member, are rooting for them to be set free. Why is that? I think we all have dreams, or even pipe dreams, and it is relatable and exciting to watch someone's dreams come true despite what they had to go through to get there.

What part of the rehearsal process has been especially exciting? Is there anything that you find especially challenging?

I am a dancer at heart, so learning the choreography from Stephanie Staszak has been a blast! And Fosse's style is captivating to the eye and immensely rewarding to dance!

Is there a particular moment in the show that you especially relish doing?

"We Both Reached for the Gun" has been so much fun, and the puppet work has been a new challenge – exciting to do the fine tweaking and a great rush onstage!

What makes this musical, which takes place in the 1920s and which was first performed on Broadway in the 1970s, still relevant today?

The music in the show is so catchy and, honestly, alive and back in style. 1920s jazz music is everywhere in 2019 New York, anywhere from your favorite brunch spot to your go-to swanky cocktail lounge.

When it's all said and done, what do you think you'll remember the most about your experience working on this production?

Definitely getting to check this dream role off my Dream Role Bucket List. And, of course, all the wonderful people I have met. It is such a positive environment at GCT and everyone from production to the cast just radiates and exudes a supportive, loving attitude.

What do you hope audience members walk away with after they see the show at Greendale Community Theatre this weekend and next weekend?

I hope they walk away, of course, feeling it was an incredible production and wanting to see it again! So a big thanks to our wonderful director, Brian Bzdawka, for breathing life and spunk into this already amazing show!