Nutella is ubiquitous now. Heck, there's even an entire Nutella Cafe in Chicago. And there appear to be more competitors than ever for your hazelnut spread dollar. We decided to taste the ones we could find in Milwaukee and compare them - a difficult job, but we did it, so you don't have to.

The insane deliciousness that is Nutella – that creamy, rich, chocolate hazelnut spread – was born out of need.

During World War II, cocoa shortages led Piedmont, Italy, pastry chef Pietro Ferrero to expand his options by mixing hazelnuts and sugar into the cocoa he did have to create a tasty "supercrema" he could use in his baking.

In doing so, he was drawing on a Torinese tradition of "gianduja" created in the Langhe during the occupation by Napoleonic troops early in the 19th century, when import restrictions stanched the flow of cocoa.

According the Nutella web site, "He shaped it into a loaf that could be sliced and served on bread and he named it 'Giandujot' after a famous local carnival character at the time. On May 14, 1946 the Ferrero Company was officially founded."

Nutella was then perfected and named for retail sale by Ferrero’s son Michele in the early 1960s. 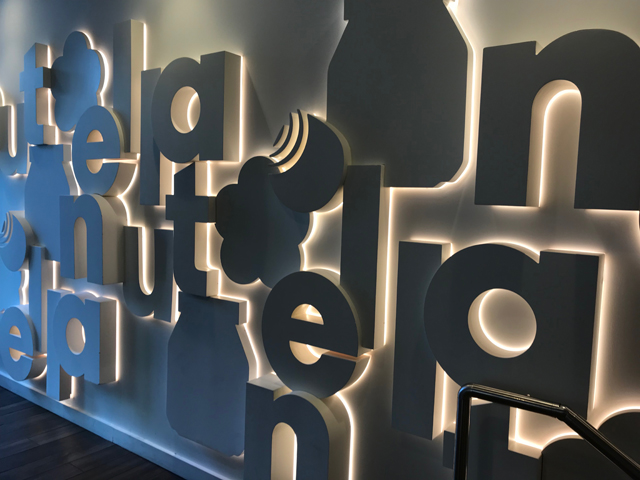 Now there is a Nutella Cafe in Chicago (pictured above), a city where local baker Do-Rite Donuts also makes a Nutella paczki and creates an iced hazelnut coffee using Nutella. And in supermarkets and other grocers in Milwaukee, you can find not only Nutella but a number of competitors vying for space in the sector created and basically totally owned by Nutella.

We decided to taste the ones we could find in Milwaukee and compare them. It was a difficult job, but, hey, we did it, so you don’t have to.

The original – though the Nutella we get here is made in Canada (and in some states, Mexico), not Piedmont, like the Nutella you can buy in Europe – is super creamy and smooth. It is the perfect balance of chocolate and hazelnut flavor that has long since become a classic and ubiquitous European candy combo. Even outside of Italy, European candies are heavy on the wedding of chocolate and hazelnuts.

Of course we all know Jif, maker of peanut butter since 1955, when Proctor and Gamble purchased an existing brand and renamed it.

The Jif hazelnut spread is much thicker and drier than Nutella – like the difference between regular and creamy PB. It’s more chocolately than hazelnutty, I think, and the hazelnut flavor really comes on the finish.

Like North American Nutella, Jif’s spread is made in Canada. Jif also makes chocolate cheesecake hazelnut flavored spread and Cookies ‘n Cream Hazelnut Spread. I didn’t try those because they seemed too unlike the others to properly compare. 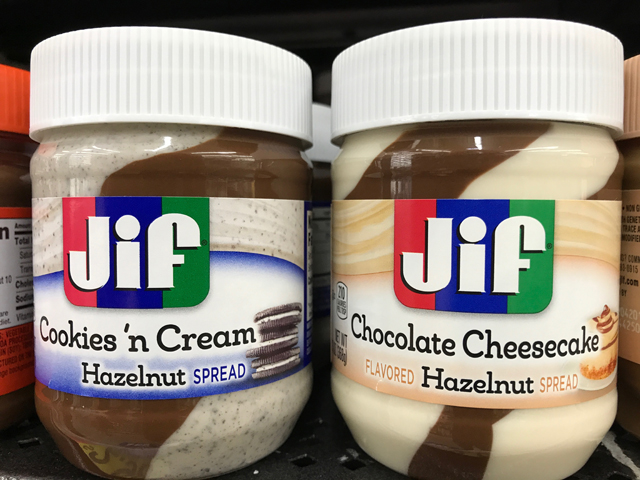 Justin’s is not super sweet like the others. It is extremely nutty and has more of a peanut butter consistency, hence the name. It is dense, thick and a little gritty.

The company is headquartered in Boulder but it’s unclear where the product is actually manufactured. I liked that it’s different than, rather than trying to just recreate, Nutella.

Kroger, which now owns Pick ‘n Save, and Market Pantry – sold at Target – appear to be in identical packaging with different labels and lid colors. The ingredient lists are identical, with the same ingredients listed same order. They are most likely the same product.

However, the Kroger jar we sampled seemed a little less creamy than Market Pantry one but that could have been due to age of the product or atmospheric conditions in which they were kept.

Both were a little darker in color and flavor than Nutella, despite the fact that the ingredients were basically the same as the pioneer.

Prices vary, of course, depending on where you shop, but Kroger and Market Pantry were the least expensive of the brands sampled, followed by Jif, then Nutella. Justin’s was the most expensive.

You'll be unsurprised to hear that there are also numerous Nutella-based cocktails out there, too. Google and you'll find plenty of them. Here's mine... 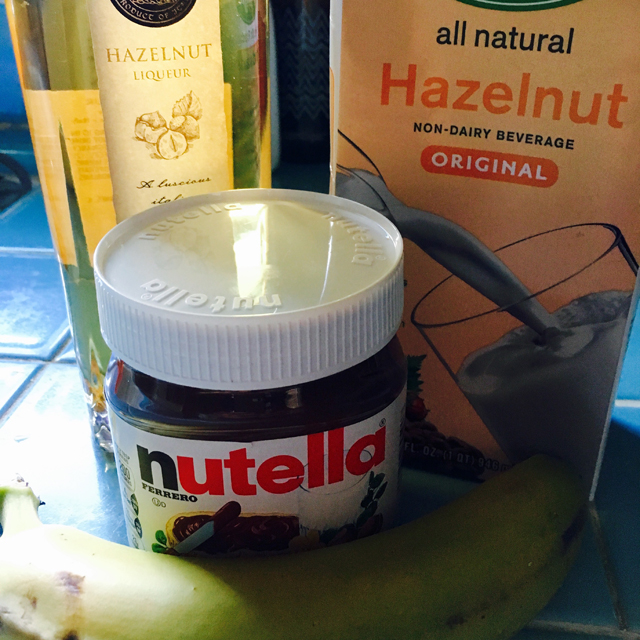 Toss a banana, a couple spoonfuls of Nutella, a shot of Fratello hazelnut liqueur and a healthy dose of hazelnut "milk" (I know, I know, it's not milk) and some ice cubes into a blender and whirr it up until smooth. Pour into a chilled highball and enjoy.