Standing amid the surviving buildings of the old Concordia College, it's easy to imagine what an inviting campus this was back in the day. Low-rise buildings - most of them in that collegiate gothic style that shouts "university" - surrounded the quad on all four sides, creating an intimate, protective environment. These days, most of the buildings survive and they're owned by the Forest County Potawatomi, which has plans to renovate the entire campus.

Standing amid the surviving buildings of the old Concordia College, founded on the city's West Side in 1881, it’s easy to imagine what an inviting campus this was back in the day.

Low-rise buildings – most of them in that collegiate Gothic style that shouts "university" – surrounded the quad on all four sides, creating an intimate, protective environment along State Street, from 31st to 33rd Streets. 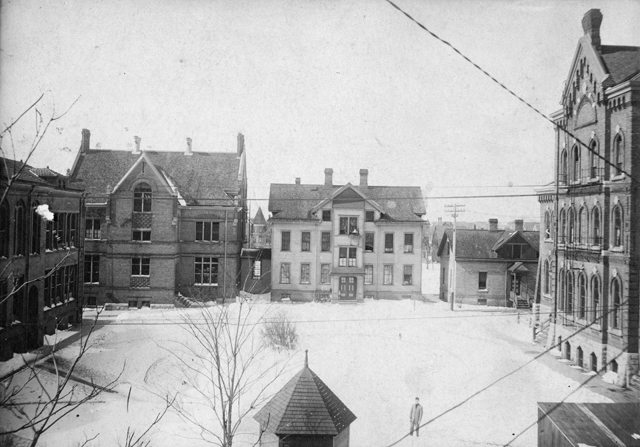 These days, most of the buildings survive – save for the eldest, including two 1880s school buildings (one Gothic, one Romanesque) that were razed long ago – and they’re owned by the Forest County Potawatomi. It has plans to renovate the entire campus, which now extends north to Highland Boulevard.

Concordia College – now University – moved to a new lakeside campus in Mequon in 1983.

"About 11 years ago, the tribe took a look at its portfolio and determined that to really sustain themselves from now until the end of time," says Stephanie VanHaag, director of communications for the Potawatomi Business Development Corporation, "they needed to establish an economic diversification business."

As part of that work, the tribe – whose members number just shy of 1,500 – decided to create the development corporation and set to work planning the future of the campus, which it purchased in 1990 and has since renamed the Wgema Campus.

"When (the tribe was) looking at the property in the Menomonee Valley they were also encouraged to look at the property here. It was kind of a package deal," VanHaag says of the former Concordia property. "It was determined that a bingo hall or casino would not make any sense here."

Since then, the old college buildings have had various uses. Pritzlaff Hall, built in 1949 with a 1954 addition, houses Woodlands School and was previously home to the Indian Community School for many years. 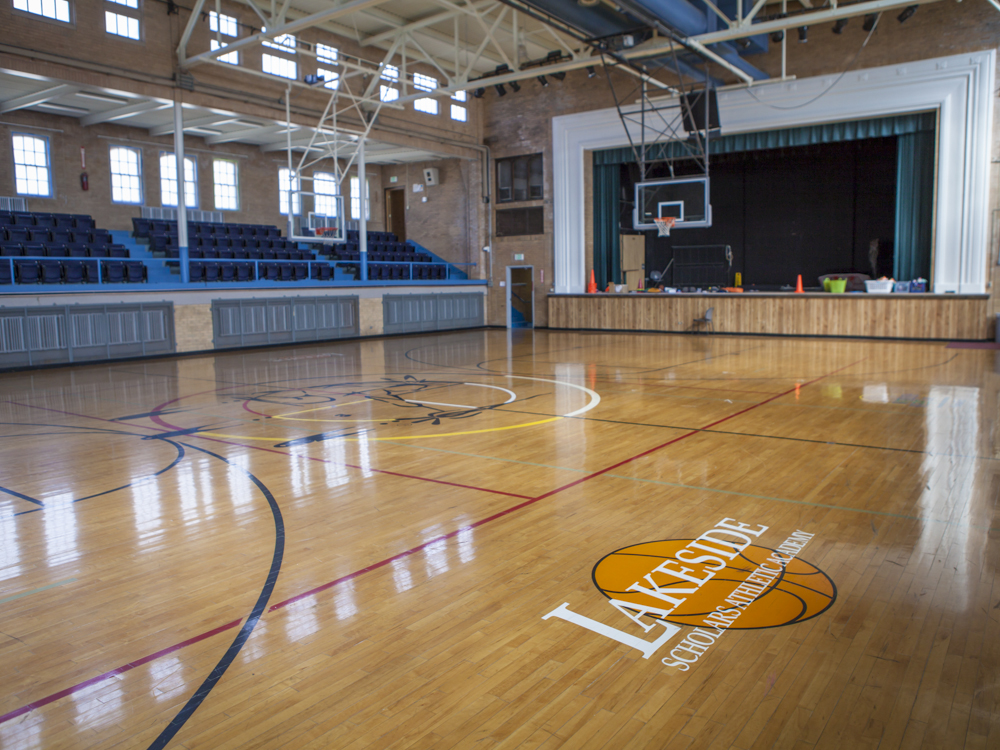 Woodlands also uses the handsome 1930 gym, which for many years was the practice facility of the Milwaukee Bucks. Close your eyes, and you just might be able to imagine Kareem dunking here.

An adjacent hall also gets frequent use. An old pool has been covered and is used for storage. You can walk into the deep end, but you have to make yourself progressively smaller as you make your way up the slope to the shallow side. 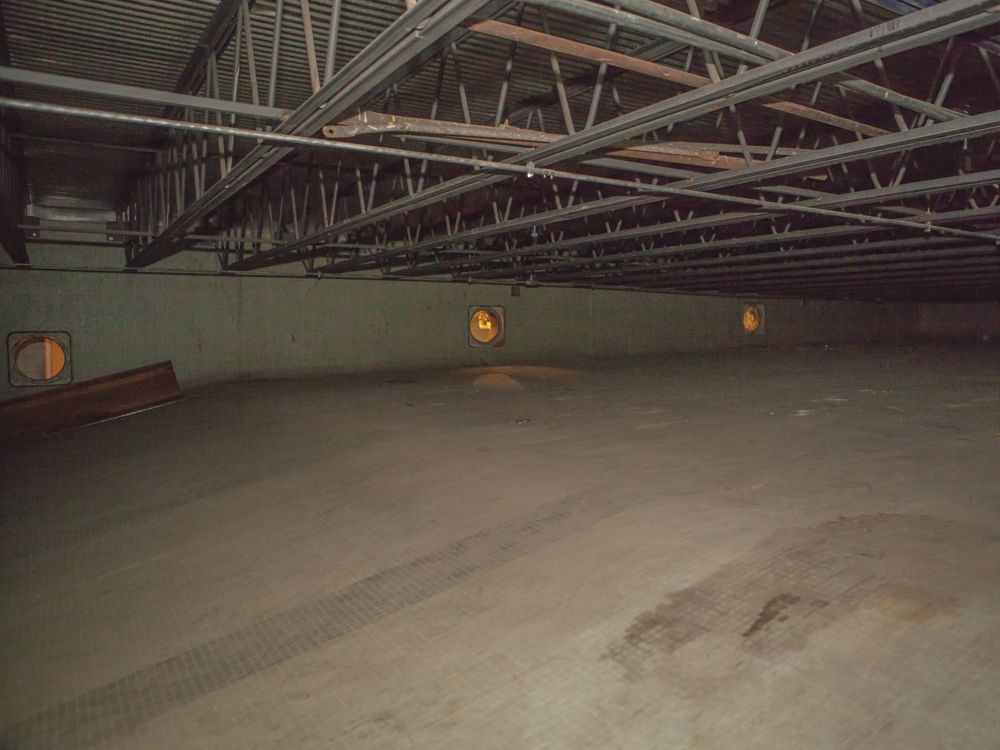 These buildings are in good condition, but there are renovation plans for them.

The Collegiate Gothic Wunder Hall, on State Street near 33rd, is the first building to be renovated. The former dormitory was recently transformed into office space and renamed the Bgemagen Building.

The tribe also purchased the former Havenwoods Nursing Home nearby and razed it last year, while a renovation of a gorgeous home on the corner of 33rd and State earned the Potawatomi a city redevelopment award.

The oldest surviving building is the Beaux Arts Albrecht Hall, designed by Eugene Liebert, whose one-time partner Herman Schnetzky was almost certainly responsible for those old Gothic and Romanesque buildings that have long since disappeared. 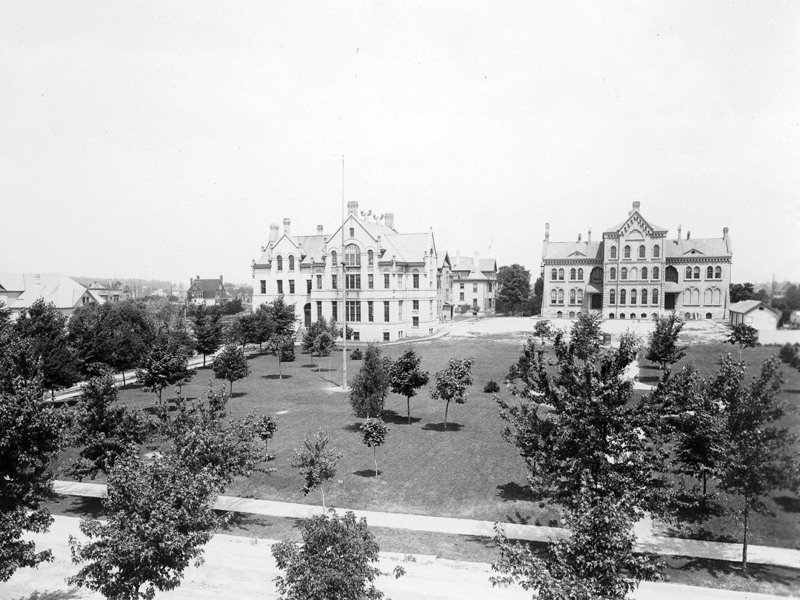 But peek around the east side of the building – hidden by a fence and adjacent homes – and you’ll see a gorgeous window that mimics one Liebert drew into his plans for the former West Side (later West Division) High School, located in the same neighborhood until it was replaced in 1958 by the current Milwaukee High School of the Arts building. 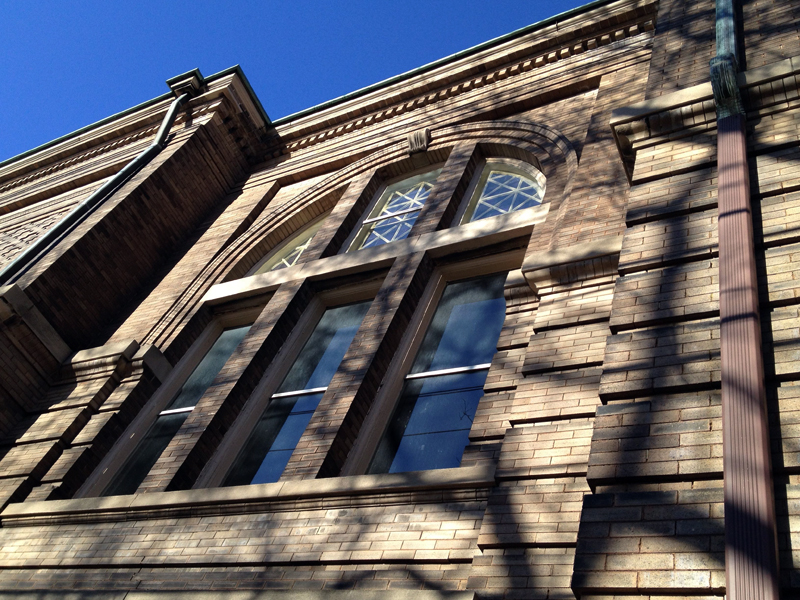 Albrecht needs a lot of TLC but it’s got some incredible bones. There’s a soaring hall that’s ornately decorated – and with a wall of nearly floor-to-ceiling arched stained glass windows – a classroom with a Gothic cathedral ceiling and lots of decorative ornament throughout. On one end, there’s a sweeping wooden staircase with a curvaceous railing at the top. 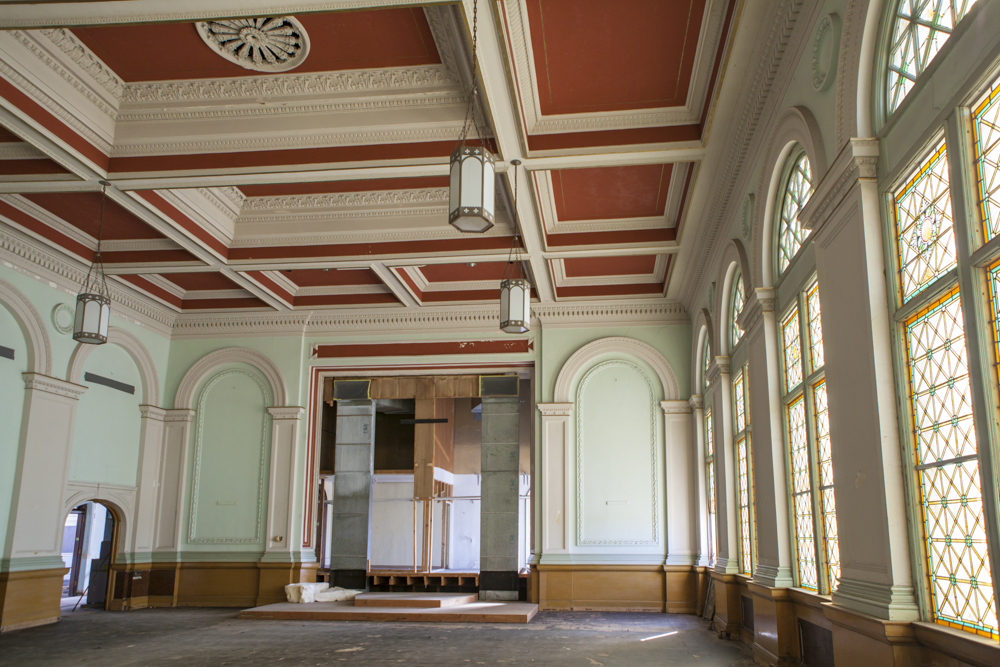 In the attic, decades of Concordia students notched their names into the wood for posterity. In another section, you can see the backside of that Gothic cathedral ceiling that's in a room below. 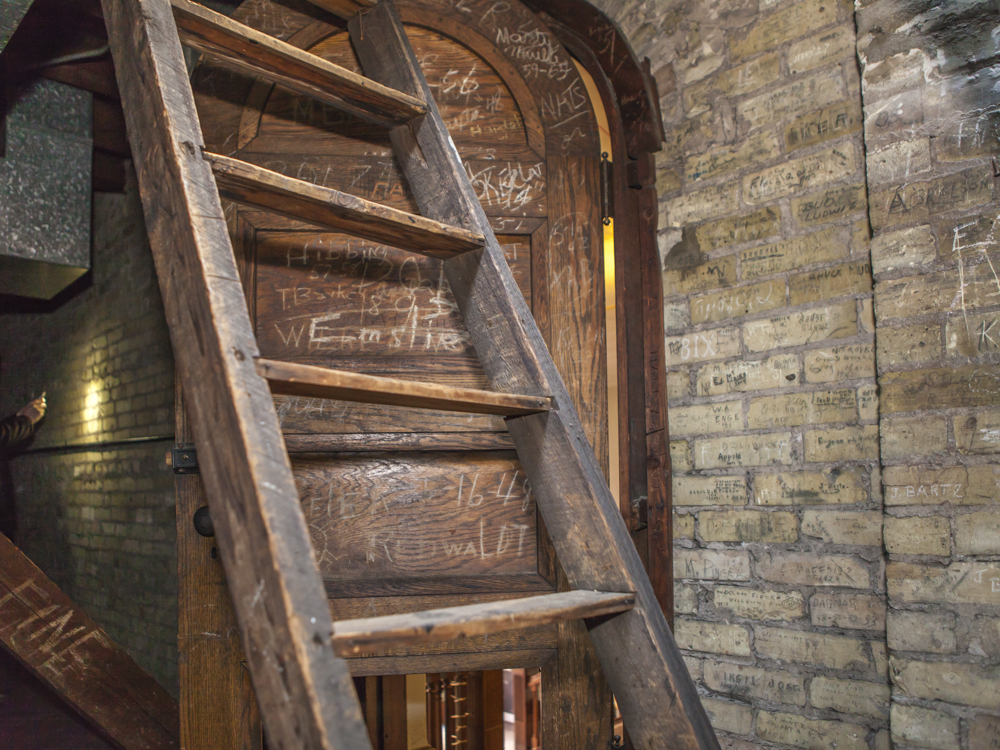 The old Rincker Library – drawn by Sheboygan architect A. Stubenrauch, who also designed Pritzlaff Hall and an addition to the gym – was built in 1941 and attached to Albrecht, albeit in an astonishingly clumsy way. The library has been in use on and off over the years.

Like Wunder Hall, the old Refectory (or dining hall) was designed by R.A. Messmer and built the same year (1925). Messmer also contributed the plans for the gym a few years later. The building has an array of old dorm and other spaces upstairs, some of them lit by skylights and some with some crazy wallpaper. 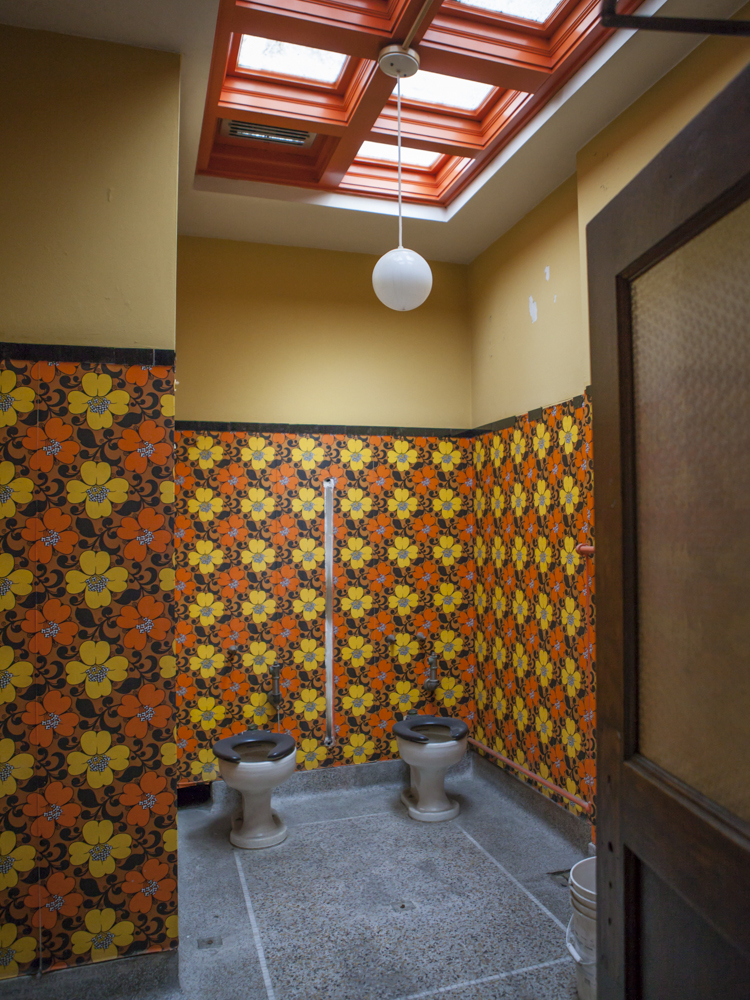 VanHaag says that renovating the entire campus, is – unsurprisingly – "a very expensive proposition. (Former occupants) left these buildings not maintained and cared for, which is how they ended up in the state that they're in now. They deteriorate quickly."

But she adds that the tribe has made a commitment to see it through. In addition to restoring the home on 33rd and Highland, which is the site of a neighborhood MPD substation, the tribe purchased a strip of adjacent duplexes and has renovated and rented them. A newly paved parking lot behind them will serve the entire campus, which includes the state of the art data center the tribe erected across the street about a year ago.

"It's our duty to manage this and develop it," says VanHaag. "We presented this to the (tribe's) Executive Council to gain their support and ... they said let's move forward (and) passed a motion to invest the $30 million to complete the rest of the buildings in a five-year phase." 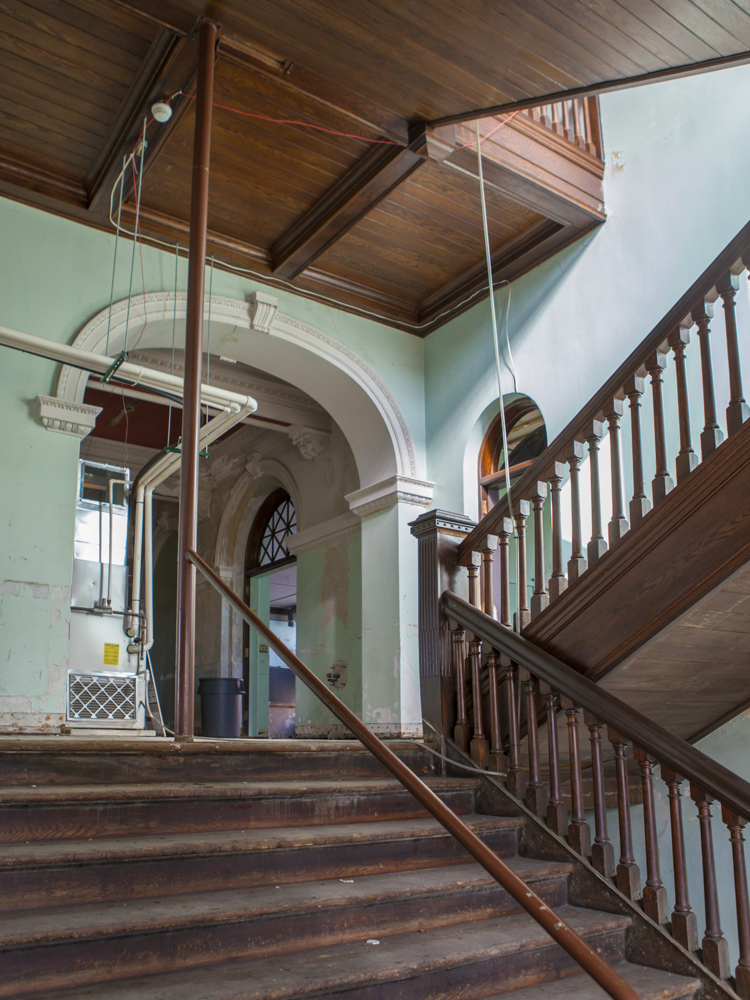 That was last September and the tribe is working with Quorum Architects, located in the Concordia neighborhood, on the project.

"A lot of people don't realize that the Potawatomi have this," says VanHaag in her office in the renovated Wunder Hall. "Sometimes it blows my mind and I work here. It is really cool."