According to owners Mike Bodow and Devin Eichler, the time was right to expand the Crafty Cow brand to Milwaukee. So the over-the-top burgers and craft beer served at Crafty Cow in Oconomowoc will be available in Bay View beginning this spring.

The over-the-top burgers and craft beer served at Crafty Cow in Oconomowoc will soon be available in Bay View.

According to owners Mike Bodow, David Eichler and Devin Eichler, the time was right to expand the Crafty Cow brand to Milwaukee. So they’re transforming the grocery and deli half of Bumstead Provisions, 2671 S. Kinnickinnic Ave., into a mini-version of the popular bar and restaurant. Meanwhile, the restaurant and bar portion of Bumstead Provisions will remain unchanged.

The new venue, which is expected to seat about 40 people, will feature an atmosphere similar to the Oconomowoc location.

"If you go out to Crafty Cow in Oconomowoc, you’ll see a lot of the same features," notes Eichler. "The dark wood, the bar, the seating. It’s really just perfect in that space."

Current deli cases will become an L-shaped bar. Televisions will broadcast sports games, and taps at the bar will showcase a rotating selection of craft beer. 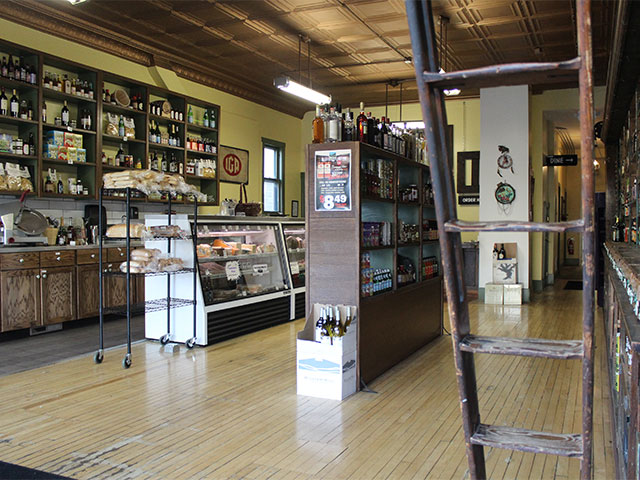 Shelving on the northern wall of the space will remain stocked with beer, wine and spirits, which will be available for purchase, along with a limited number of shelf-stable accompaniments. Growlers of beer will also be available to-go at the bar.

On the food side, the Crafty Cow menu will feature a number of familiar items like a signature beer-battered cheese curds and a selection of hand-formed stuffed burgers – including favorites like the Twice Baked stuffed with cheddar and bacon and topped with potato chips, seasoned sour cream and onions; the Dirty Swiss stuffed with aged swiss and portabella mushrooms and topped with caramelized onions; and the Lucy, a tribute to the original Jucy Lucy burger.

The Bay View location will also feature a number of additional unique burgers, including five burgers with ingredients inspired by collaborations between Milwaukee-area businesses. A portion of the proceeds from these burgers will be donated to local causes, notes Bodow, who says the burgers are just part of a larger initiative called The Great Milwaukee Project.

"It’s a project we’ve been working on for over a year," he says. "The idea is really to bring the entire business community together … to activate the city for everyone. For us, it will begin with some collaborations surrounding food, but it will eventually go beyond that."

As an added bonus, since the restaurants are interconnected by a hallway, the entire Bumstead Provisions menu will also be available to guests at Crafty Cow (and vice versa), expanding food options for both venues.

In fact, beginning Friday, Feb. 23, the Bumstead menu will feature two new Crafty Cow burgers each week as a precursor to the opening. This week's offerings will include the Lucy, a classic Jucy Lucy-style burger filled with American cheese as well as the Aloha Beast, a burger stuffed with mozzarella and BBQ pulled pork and topped with ham, pineapple, red onion and barbecue sauce.

Once open, Crafty Cow will also feature a variety of daily specials, including:

If all goes well, Eichler and Bodow say they’d like to have Crafty Cow up and running by sometime in April.