As a jobbing musician, talent buyer, venue manager, etc., seeing live music is a frequent occupational pastime. It's easy to get jaded, but every now and again someone or something blows your mind.

As a jobbing musician, talent buyer, venue manager, etc., seeing live music is a frequent occupational pastime. It's easy to get jaded, but every now and again someone or something blows your mind.

The following is a list of five of some of my favorite ever concerts. I apologize in advance for the list ending abruptly in the mid 1990s. I guess those early formative music experiences had more of an impact than the later ones. And there are definitely notable recent shows like The Arcade Fire at Leeds Festival or Bjork at Radio City, for example. But with an anecdote or two attached, here's what I got: 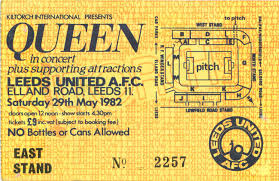 I'm not sure what happened exactly at this gig. I guess I was transported … somewhere. The band was touring the distinctly dodgy "Hot Space" album which was basically Freddy Mercury hanging out in gay discos and the rest of the band begrudgingly going along with it. But that didn't detract from the band’s amazing repertoire, immense light show and supreme command of stagecraft.

I lost half my clothes, probably half my mind and walked home from my beloved Leeds United's home field, knowing I had seen the greatest ever stadium rock band. I was never the same since.

At college in London? Huge Prince fan? Why did I only go to one of the seven legendary shows he gave to promote "Lovesexy"? I guess I'll never know, because up there in the stratosphere is Prince, and then there’s everyone else. By the time he got to "The Cross" there were tears of joy rolling off my face. This man outplays, outdances and outsings anyone I can think of, and hey, with Sheila E, Cat and Eric Leeds in tow, his band doesn't suck, either!

My obsession with hard rock was knocked soundly off course when I started hanging out with the local "rude boys’" at school; they introducing me to the psychedelia of dub reggae.

It all made perfect sense when Black Uhuru rolled up to Leeds University that summer. The local Rastas had been causing a few problems as I recall, and it was thrilling for a lad from Leeds to be at a local concert and in some sort of ethnic minority.

The band was just brilliant, I had a massive crush on the now deceased Puma Jones, and I got to meet Sly and Robbie (their rhythm section) outside afterwards: Result!

Spacehog was lucky enough to tour South America. It was a nice way to extend our summer, playing in the warmth of the southern hemisphere. But to get there i had witnessed a years worth of crappy ‘90s proto grungy alt rock bands, and most of them were shite. So when the promoter called and asked if we would be interested in seeing Nick Cave in the local Opera House, we were all thrilled at the prospect of a change of sonic scenery. And Lord, he did not disappoint. I'm a bit sketchy on the details but the setting and the selection, in support of that years' "Murder Ballards" album, made for a memorable evening.

I was probably 15 when Rose Tattoo rolled through Leeds in support of their brilliant debut "Assault and Battery." I sauntered out of my parents’ house, telling them I was going to hang out with my friends. I then applied a charcoal pencil to my top lip on one of the two buses I had to catch to the bad side of town, in an attempt to pass for 18. I nervously waited in a line of denim and leather with my friend Chris, rehearsing my imagined date of birth so as to gain entry to this most hallowed (and seedy) of Yorkshire rock venues. The band played what I consider to be the most rock'n'roll gig I have ever seen at ear splitting volume. I was so dumbstruck we burst backstage and into the bands dressing room, where i was hugged enthusiastically by a naked and sweaty Angry Anderson, putting to bed the dregs of his bottle of Vodka. In short, a real game changer.