This summer, Feral House books will re-issue the autobiography of the late barkeep, bawdy house owner and bon vivant Helen Cromwell, and the book's editor, Christina Ward, has collaborated with Great Lakes Distillery on a bourbon to celebrate the occasion.

This summer, Feral House books will re-issue the autobiography of the late barkeep, bawdy house owner and bon vivant Helen Cromwell, and the book’s editor, Christina Ward, has collaborated with Great Lakes Distillery on a bourbon to celebrate the occasion.

There was a time when no Milwaukeean needed an introduction to Cromwell, but times have changed and so, if you don’t know about Helen, read this first. 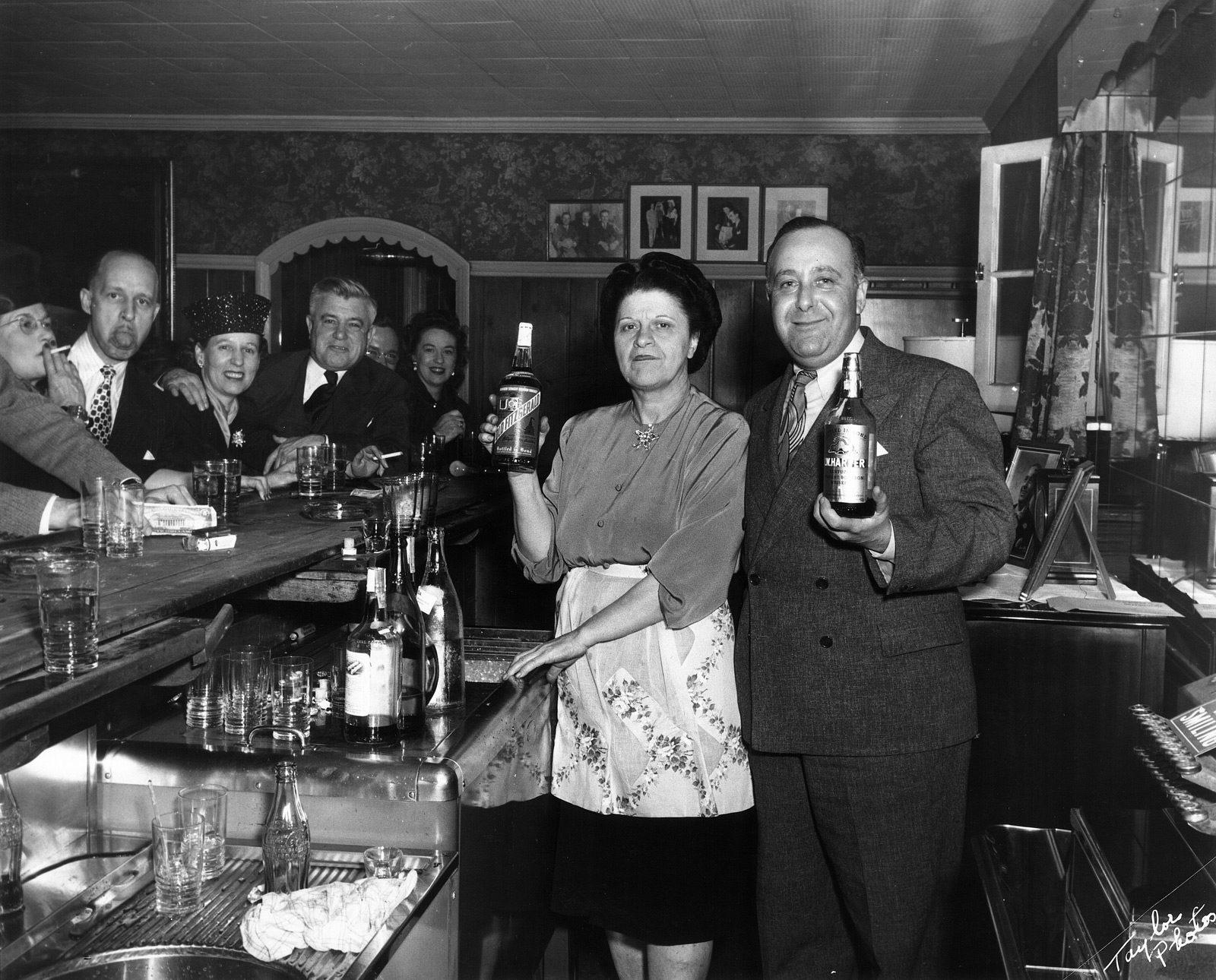 Dirty Helen, pictured above in her Sunflower Inn, loved her Old Fitz.

"Helen only served House of Lords Scotch and Old Fitzgerald Bourbon," says Ward. "It made me think how tickled Helen would be to have her own bourbon. So I reached out to Guy (Rehorst) with the idea. Guy, being the gentlemen and scholar that he is was familiar with Helen's story. And is a fan of Drinky Crow, the cartoon character drawn by Tony Millionaire."

Millionaire drew the portrait of Helen used on the cover of the book. 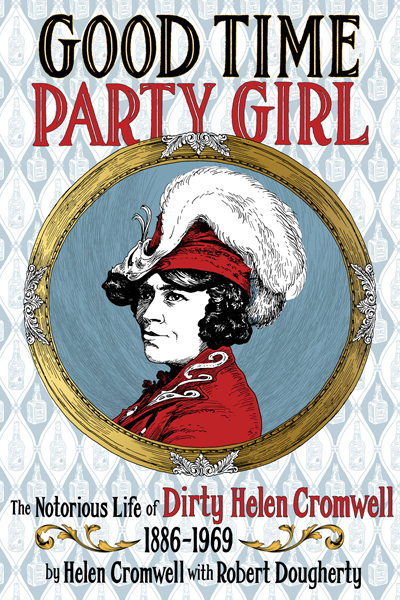 "It was a perfect fit! Guy used Tony's drawing of Helen, I wrote a little history (for the label), and voila! Dirty Helen Cask Strength Bourbon."

The bourbon launches with a party for both book and whiskey at the distillery, 616 W. Virginia St., in Walker’s Point, on Aug. 23.

"When Chris approached I was pretty excited about the idea," confirms distillery founder and owner Rehorst. "Being a native Milwaukeean with a long family history in the bar biz I had heard stories of Dirty Helen for years. It also didn't hurt that my grandmother's name was Helen, she had a rather sharp tongue herself and was jokingly referred to as Dirty Helen by family and friends."

The bourbon is a cask-strength expression of Great Lakes’ 86 proof Still & Oak Bourbon, which is available right now at the distillery.

But, like Helen, her eponymous whiskey is the sassier version.

"At 126.4 proof it as expected will have a little bite," says Rehorst. "The nice thing about barrel strength is you can see how it came from the barrel and if you like adjust it with water to an alcohol level you prefer.

"It has a very rich malty flavor due to a bourbon mash bill with an unusually high percentage of malt (67 percent corn, 22 percent malted barley and 11 percent rye). I also get notes of leather and tobacco. It's the first barrel strength whiskey we've released so we're pretty excited to see how it's received."

The Dirty Helen is being bottled from two 53-gallon casks which Rehorst expects to net about 400 bottles that will retail at about $50 each. 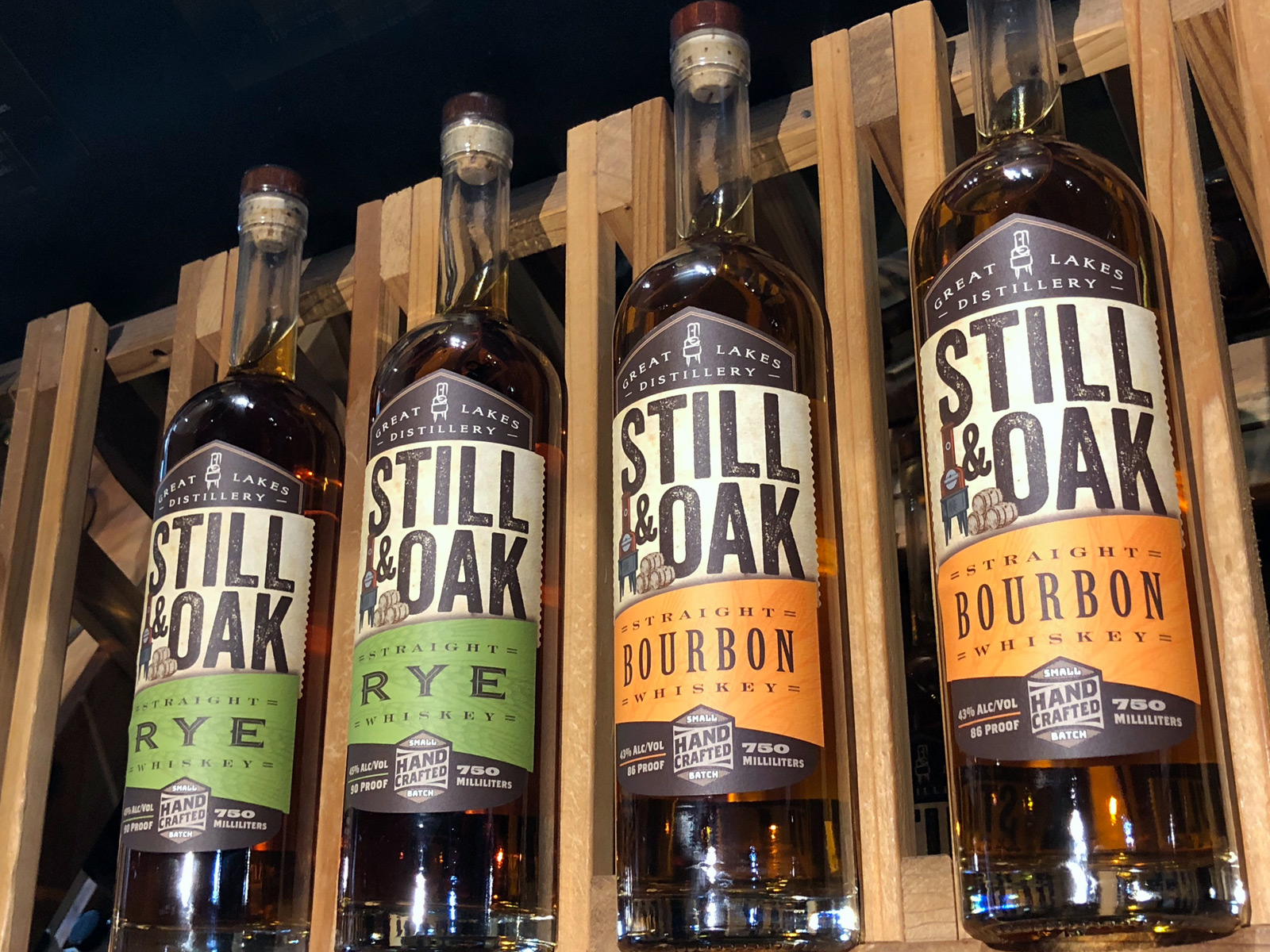 The Still & Oak series ($39 each) currently also has a 100 percent Wisconsin-grown rye (22 percent of it malted), aged at least two years in new 53-gallon charred white oak barrels – that is smooth, earthy and grassy with a light touch of spice.

Some other interesting whiskeys ...

Though I haven’t tasted them yet, Milwaukee’s Central Standard has a new expression of its pot-stilled bourbon that is finished in Cabernet Sauvignon barrels, as well as a whiskey that celebrates the 25th anniversary of Grand Geneva Resort in Lake Geneva.

Central Standard has also brought back its popular L Flag Bourbon in time for the Brewers-Cubs series! 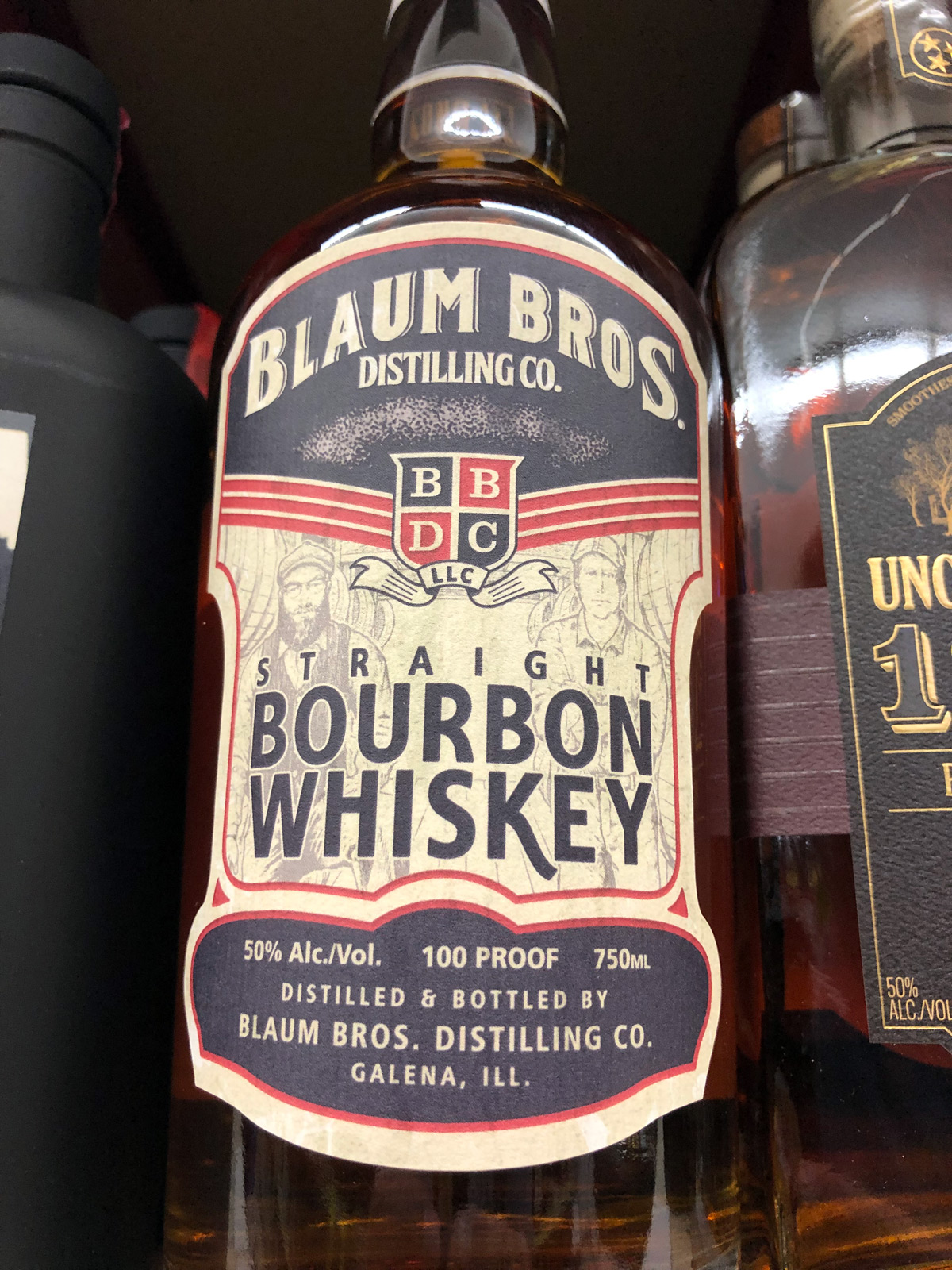 Meanwhile, at Twisted Path in Bay View, Brian Sammons says his next whiskey, another rye, is expected to be ready in autumn.

Galena, Illinois’ Blaum Bros. distillery has just about the best no-nonsense blurbs in the whiskey world. The back label on this reads, "Instead of inserting a hacky and fabricated story here, we will instead declare that we are a couple of scrupulous and unfeigned brothers whose sippin’ whiskeys have come unstowed."

The brothers’ straight pot-stilled bourbon (72 percent corn, 23 percent rye, 5 percent malted barley) – the distillery’s first produced entirely in-house – hits the bottle at a punchy 100 proof from small, eight-barrel batches per bottling. Aged at least four years, this is, according to Mike Blaum, "the youngest whiskey you’ll ever see from us moving forward."

There’s honey and almond, with a dash of cinnamon and a spicy oak note on the finish of this whiskey that shows promise for this upstart young distillery.

Reading about this history of bourbon and American whiskey, you can’t avoid the name of the influential E.H. Taylor, who long fought for laws that guaranteed the purity of the distillers’ products. 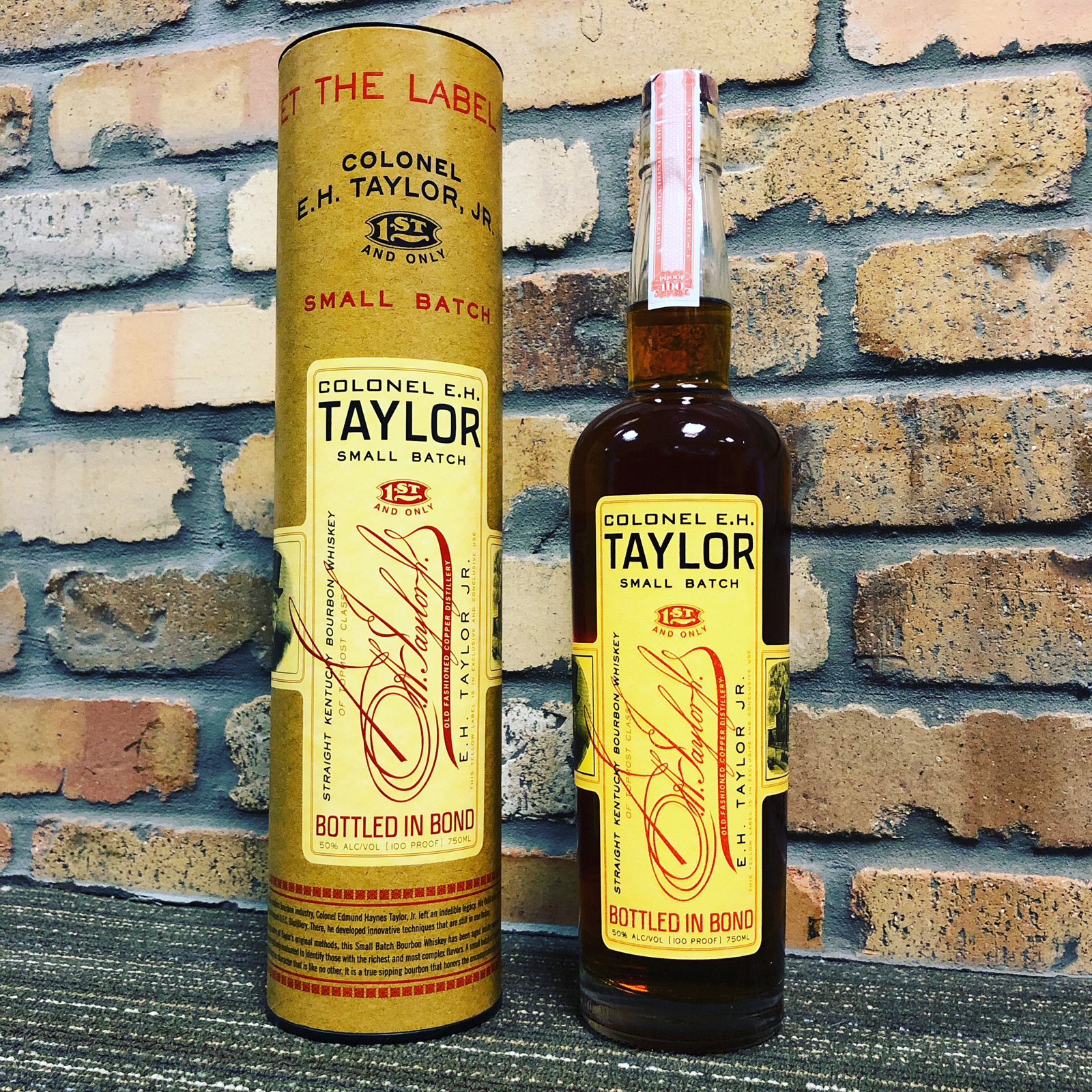 The eponymous Colonel E.H. Taylor Small Batch Bottled in Bond Straight Kentucky Bourbon (aged at least four years in rickhouses constructed by the Colonel) is worthy of its historic name, with a gorgeous copper color and chocolate, vanilla and raisins, and a peppery finish.

Beautifully rich in flavor – in a bottle whose label feels historically rich, too – this bourbon does not disappoint.

If you want something a little more exotic, the Colonel recently launched a limited special release – Taylor's 10th bourbon – that uses the Buffalo Trace Mashbill No. 1, but replaces the rye with amaranth.

If you've read my story about visiting Koval Distillery in Chicago – which uses millet – and Watershed in Columbus, Ohio – which uses spelt – you know I'm a fan of whiskeys that use more unusual grains, and this Taylor edition shows why.

Unlike any other whiskey you've likely tasted, this one has a hint of spearmint on the nose and palate – and like spearmint, it even wafts up to invigorate your sinuses – sliding smoothly into a earthy light coffee vibe before fading slowly with honey and an oat-y sweetness.

If you follow me on Instagram, you already know what I think of the new 12-year-old small batch bourbon from Bardstown-based Barton 1792 ...

The new 12-year-old #smallbatch #bourbon from @1792bourbon seems like a steal at $50 a bottle. It’s smoky and oaky and spicy but with an underlying sweetness and a creamy mouthfeel and amber color. Some heat in the initial nose but if you let it sit for a couple minutes it smooths out beautifully. Very, very nice @visitbardstown #whiskey #bourbonism @bourbon_banter @bourbonreview @bourbonandwhisky @the_bourbon_life @breakingbourbon