Two former Milwaukeeans are going where few coffee shops have gone before at a new cafe in Sister Bay. Billed as Door County's newest forward-thinking coffee destination, Discourse is the brainchild of Ryan Castelaz and partner Chris Johnston.

Two former Milwaukeeans are going where few coffee shops have gone before at a new cafe in Sister Bay.

Billed as Door County’s newest forward-thinking coffee destination, Discourse is the brainchild of Ryan Castelaz and partner Chris Johnston, both of whom spent time working with Valentine Coffee Roasters in Milwaukee.

Discourse opened in July at 10588 Country Walk Dr. in the Country Walk Shops complex, and it’s likely like none other you’ve experienced.

On a mission to truly celebrate coffee’s nuance and versatility, the shop features between two and four coffees from a curated a list of 16 roasters located throughout the U.S., the United Kingdom and Australia. And those coffees can be experienced via the shop’s single origin espresso or numerous manual brewing options including the Phoenix 70 and the Trinity One.

"One of my goals with Discourse is to bring the act of making coffee closer to an art form," notes Castelaz. "Whether that’s bringing to life a roaster’s nuanced flavor profile or crafting a new coffee-based beverage or dish, the idea is to push coffee forward as an expression of art and subject of culinary conversation." 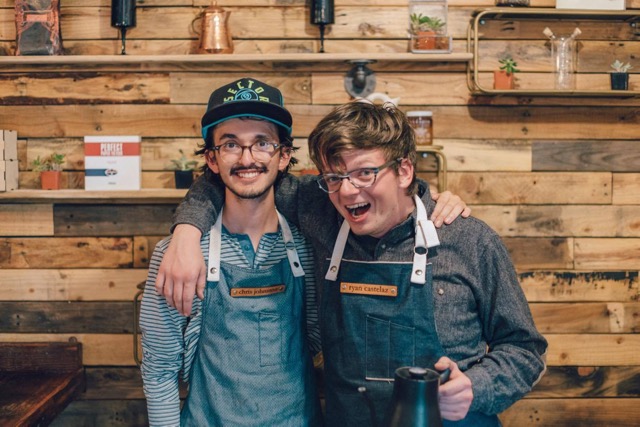 Some drinks at Discourse merely inch people out of their comfort zones.

M O O N W A T E R | espresso | steamed milk | local honey | cinnamon | black pepper | chardonnay barrel smoked sea salt || Our house latte, a liquid embodiment of the balance between comfort and discomfort. Through all the wildness to come, Moonwater will be a staple for us, a welcome home. 📷: @mattdsampson

Other mixology-inspired drinks begin to push boundaries in terms of what coffee can be.

Take for instance DisONYX, a pitch black coffee drink using activated charcoal that sprung from a collaboration with Onyx Coffee Lab in Arkansas. Originally inspired by a drink from a coffee truck in the U.K. called a "goth latte," it combines cold brew coffee with activated charcoal and grapefruit soda made with honey and lemongrass.

d i s O N Y X | grapefruit-lemongrass simple | activated charcoal | cold brew | tonic || The best things in life are made with friends. They're even better when those friends happen to be the insanely rad crew @onyxcoffeelab. disOnyx has been our jam this summer and we're going to miss it terribly when it leaves the menu on September 1st. Get your fix before she's gone forever (or at least a while). Also, one million shouts out to our main man @mattdsampson for these incredible photos of our work. We love you.

And the name is part of the fun.

"It’s a combination of our business names and a play on the word ‘dishonest,’" says Castelaz. "The fact is, it looks black and dark and sludgy, but drinks really light and refreshing."

Other offerings feature coffee as an ingredient in an experiential culinary journey.

Take for instance the Crenn, an exercise in molecular gastronomy inspired by a dinner at Atelier Crenn in San Francisco during which Chef Dominique Crenn served apple cider spherified in a cocoa butter shell and topped with a cassis preserve.

"You take it and grab it like a gobstopper. And when you put it in in your mouth, it explodes into liquid," says Castelaz. "That was indicative of the entire experience at Atelier Crenn. The first thing you get when you arrive is a little envelope. Inside is a poem by the chef. And every course in the meal is a line in the poem. And you’re kind of just walked through this beautiful narrative. It made me realize how powerful food and beverage can be … how they can speak and express a story through flavor."

In honor of the experience, Castelaz and Johnston created a sphere made with chocolate from Dandelion in San Francisco and cocoa butter. The sphere envelops infused cold brew.

CRENN V.3 | @brandywinecoffeeroasters Kenya Boma slow drip Infused with spearmint | @dandelionchocolate | applewood-smoked honey | dehydrated lime + @breakawaymatcha salt || Did you miss this?! One of our most exciting Crenn variations to date, V.3 is sure to take you on a one-way trip to Flavortown (@guyfieri). Available again next weekend! 📸: @creative_compassion

"This week, we made it with spearmint infused slow drip," Castelaz explains, "and we painted it with smoked honey and powdered dehydrated lime. When you pop it into your mouth, you don’t really even know just what happened. It’s a dynamic flavor experience."

In the end, he says, it’s an illustration of what Discourse embodies – an experience that straddles both comfort and discomfort.

"You go to a coffee shop for comfort," he explains. "You go for a boost of caffeine. You go to have a conversation with the barista. It’s a place where you’re comfortable. But, we’ve exploring this territory of ‘how uncomfortable can we make you?’ Discomfort breeds growth. It encourages us to grow, to think. And that’s what we’re after."

The journey to Discourse

Castelaz, who has lived in Door County off and on since graduating from college, officially put down roots on the peninsula in March of 2016 when he took a position as the beer buyer for Bier Zot Beer Cafe in Sister Bay. During his first few months there, he says he spent a good deal of his free time reading, watching episodes of "Chef’s Table" and researching various aspects of molecular gastronomy, mixology and the psychology and physiology of flavor.

"When I saw what these chefs were doing, it just struck me," he says. "What these guys are doing is really expressing themselves. And I began to wonder if we could apply the same principles to coffee."

Castelaz began scouting for locations to open a cafe. And when he found one that looked promising, he called Chris on the phone and asked: "Are you ready to uproot your life and move to Door County?"

What followed was months of coffee education and culinary exploration.

Begining in January, Castelaz took seven weeks and traveled the country, gathering inspiration from over 100 coffee shops and restaurants. "I wanted to get an idea of what the country – as a whole – really appreciated about coffee," he says.

What he found was inspiration, sometimes in the most unexpected places.

"One of the best surprises was at a coffee shop called Evocation in Amarillo, Texas," he says. "The coffee was some of the best I’ve ever had. They had one roast that was almost identical in flavor to a peach cobbler. It tasted of huge, juicy ripe peach on the front, but it faded into this graham cracker like sweetness with a bit of cinnamon spice. It was so expressive of origin that it was mind-blowing. And I thought, if we can find something like this in Amarillo, why can’t we push things forward in Sister Bay?

Yet, despite the inspiration that came from his travels, Castelaz credits his time at Valentine Coffee for the foundations on which Discourse are built.

"Joe [Gilsdorf] and Robb [Kashevarof] really taught me how to be a professional barista," he says. "I’d been brewing it at home for a few years. But, the experience working with them, and on the Milwaukee coffee scene, was mind blowing. We look at places like Pilcrow and Anodyne and Stone Creek … they’re all creating a vibrant coffee culture in Milwaukee."

It’s also where he met Johnston, a barista who’d worked at Colectivo Coffee before taking a job at Valentine working the night shift with Castelaz, with whom he shared a love for creating new things and challenging one another’s palates.

"We’re Milwaukee boys tried and true, and what we do is representative of what the city has taught us," Castelaz explains. "We’re taking what we’ve learned and re-imagining that experience. We want a coffee house where people engage in the intellectual process of exploring flavors and discovering new things. In the end, it’s all a big ‘thank you’ to Milwaukee."

Discourse is open April 1 through February 1 with hours Thursday through Monday from 7:30 a.m. to 2 p.m. You can get a peek of their inventive creations on both Facebook and Instagram.