A new dinner series aims to provide a safe place for guests from diverse backgrounds to share a meal and engage in meaningful conversations about race, gender, segregation and any number of related topics.

These words form the mission of Diverse Dining, a new organization which hosts monthly dinners. The experiences are open to the public, and their aim is to provide a safe place for guests from diverse backgrounds to share a meal and engage in meaningful conversations about race, gender, segregation and any number of related topics.

Table rules include common courtesies like arriving on time, assuming positive intent on the part of other guests and avoiding generalities when speaking. Cell phone use is strongly discouraged at the dinners and guests are encouraged to speak from personal experience only.

Diverse Dining founder Emerald Mills says she took inspiration from the late Anthony Bourdain who said, "You learn lot about someone when you share a meal together."

"One of the issues I see here in Milwaukee is that people don’t have enough everyday opportunities to interact and engage with people of different cultures and backgrounds," she says. "And there are very few opportunities to do so in a space where there’s a level playing field. So, the goal here is really to create that opportunity, a safe space for people to engage and learn about one another."

Mills says she sees the dinner conversations as a way to bridge racial, social, economical and generational gaps and combat the toxic silence that has taken hold in our city.

"We have serious issues to contend with," she says. "But people don’t know how to begin dealing with those big issues: equity, racism and segregation. As a result, we just don’t talk about it. But change begins with conversation. And the more we talk, the more we understand. And when we understand, we have the courage to act." 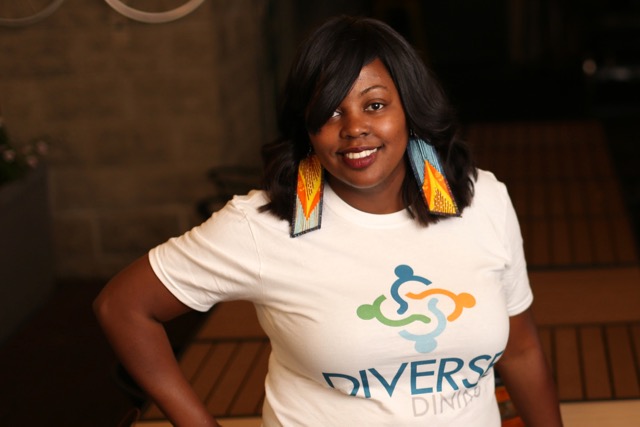 Mills grew up in Zion, a small close-knit town in Northern Illinois.

"It’s a fairly diverse town for its size," she says. "So my friends naturally came from a variety of backgrounds. And yet, it was commonplace for people to greet one another, to be friendly, and to care about one another, regardless of our outward differences."

But when she moved to Milwaukee during her junior year in high school, Mills says she noted a significantly differently climate. And she took note.

"It really made me realize how cliquey people are," she says, "and how we often don't really expose ourselves to people and things that are different. It was a really difficult time in my life; I became intentional about cultivating some really unique friendships. But I also had to really work to break down the barriers that I subconsciously built that separated me from other people."

While attending UW-Milwaukee to earn her degree in communications, Mills made the decision to purchase a duplex to help offset her expenses as she paid her way through college. She says that living in the duplex, which was located on 25th and Hampton, opened her eyes to the disparities that exist from neighborhood to neighborhood throughout the city. And those issues became even more clear when she took a job as an HIV prevention specialist for the Black Health Coalition, where she trained youth to lead presentations across the city on HIV and tobacco prevention.

After graduation, as she worked to build her career, she accepted a position with the Milwaukee Health Department where she was responsible for tasks including notifying sexual partners of HIV, testing and interviewing them.

"The workload was never-ending," she recalls. "Everything was reactive, and we were constantly putting out fires. I’m the sort of person who would much rather look for solutions to problems than simply continue to Band-Aid them. So I found myself really wanting to move back into a position that focused more on prevention and education."

In 2013, Mills found herself in a unique situation; she became an "instant mother," taking on guardianship of her sister's three children. In her new role, she faced the common challenge of grappling with where to send her pre-teens to school. Despite making what she thought was a good decision, her 15-year-old experienced the unfortunate circumstance of attending a school where she had five different teachers in one year. At that point, Mills says she made the decision to move to a suburban community.

The move was a mixed blessing. Her children were receiving a quality education. But socially, the transition was difficult.

"At one point, a student told one of my nieces that she should, 'Go back to the North Side,'" she says. "And I really began to see how our experiences – and the people we choose to share our lives with – are intimately connected to the issues we see in our city today."

Once in a mothering role, Mills knew she needed more flexibility, so she took on a new opportunity at Children's Hospital where she now trains school leaders and administrators at Milwaukee Public Schools to implement a schoolwide health model. Despite a passion for her work, she says the role is challenging, often giving her an inside view of how racism and systematic oppression are all-too-often overlooked.

"These were all things that made me realize I wanted to do something more," she says. "And as the climate in the city became more and more politically charged, I found my motivation. They always say that if you're not part of the solution, you're part of the problem. So starting Diverse Dining was really my way of being part of the solution." 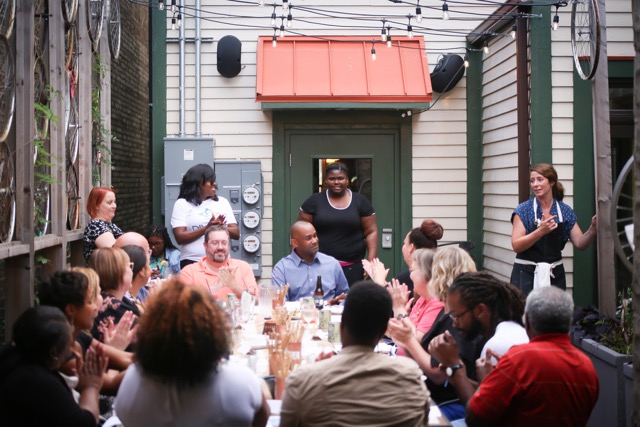 Begin with a conversation

Mills says she hosted her first dinner with a group of friends, just to see what type of structure might work best. From there, she connected with area restaurants and began planning her first public events.

She kicked off the Diverse Dinner series in June with a sold-out dinner at The Tandem, where she brought in a speaker to talk about youth employment in the Lindsay Heights neighborhood. A second dinner at the end of July benefited from a similar reception.

"We already have people who’ve signed up for multiple dinners," she says, "And that’s great. That tells me that people understand ... these conversations are uncomfortable, but we need to have them. And – in the end – we need to develop the knowledge and the relationships that empower us and give us the courage to really become advocates for one another in the world."

Mills says the dinners are just the beginning of her vision for Diverse Dining, which she hopes to expand to include elements like youth development, corporate team-building and facilitator training.

"Ultimately, I want people to walk away feeling a little more courageous, compassionate and connected. I also hope there are some people who will take this experiences and really let them take root in their own lives. I’d love to see dinners like this popping up across the city."

Be part of the change

If you answer "yes" to one or more of these questions, you should consider attending an upcoming Diverse Dining dinner.

The next Diverse Dining dinner will take place on Friday, August 31 at 6:30 p.m. at Island Jam, 2703 S Chicago Ave. The cost is $35, which includes an appetizer, entree and sides. Tickets can be purchased online.