Alderman Bob Donovan and the Journal Sentinel's Dan Bice have conflicting stories regarding an interview the reporter did on an old citation for restroom peeping that Donovan received in 1992.

Alderman Bob Donovan and the Journal Sentinel's Dan Bice have conflicting stories regarding an interview the reporter did for an article about an old citation for restroom peeping that Donovan received in 1992.

Three days before the primary election for Milwaukee mayor, and two hours before the mayoral forum between the four mayoral candidates, Donovan’s campaign Facebook posted claims that Bice approached him after a Milwaukee Police Association endorsement press conference and "ran up to me immediately following the announcement and questioned me loudly, using language not fit for a public setting, especially one that included women." Donovan called Bice’s resulting column a "gossip article." He added for good measure that he believed it was "a disrespectful and at times vulgar interview."

Dan Bice, gossip columnist for the Milwaukee Journal Sentinel, has penned yet another attack article directed at an... Posted by Bob Donovan for Mayor on Saturday, February 13, 2016

Bice denies all of this, says the interview was a "calm affair," and says he has the audio to prove it. Bice added he has known Donovan for years and doesn’t need to "scurry up to him to get his attention."

At the center of Bice’s article was the ticket for disorderly conduct that Donovan received at the University of Wisconsin-Milwaukee in 1992, when Donovan was in his 30s. In the lengthy Facebook post that sought to preempt Bice's story, which ran Tuesday and brought the summons back into the public debate, Donovan – who is running against Mayor Tom Barrett in the April election – denied doing anything improper in the campus bathroom.

"To the incident in question: I was ticketed for disorderly conduct in 1992," said the Donovan campaign Facebook page post. "As a result of the incident and ticketing I was embarrassed and did not pursue the matter further – in hindsight, I absolutely should have. As it was, I paid the ticket immediately to avoid further embarrassment and because I simply wanted to put the matter behind me." 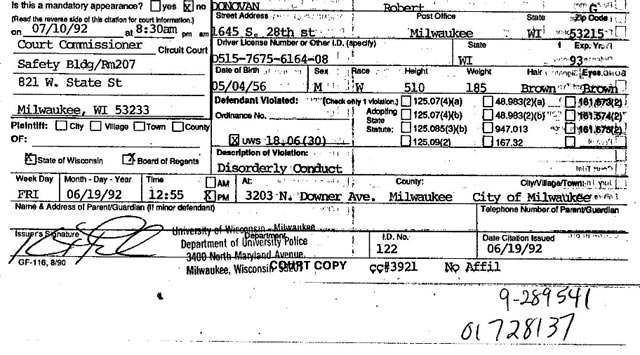 The post called the ticket itself, which was posted years ago on a local blog, a "supposed police record" and "supposed document" and said it couldn’t be "absolutely determined" who wrote it. The June 19, 1992 ticket, which was posted on Blogging Blue in 2012, is stamped "University of Wisconsin-Milwaukee Police Department" and bears the issuer's signature, although the signature is difficult to read.

Responded Donovan on Facebook: "The fact is I have unequivocally maintained for 16 years that I absolutely did not make any of the comments attributed to me in the supposed document. The fact is the incident was a misunderstanding."

Julie Kipp, the public records custodian for UWM, said Tuesday that the university police have not maintained any records relating to the long-ago incident.

For his part, Bice told OnMilwaukee that he has known Donovan for years and that he "did not scurry up to him to get his attention" or shout or yell. Bice added that he regularly interviews politicians after public events. Bice pointed out that Donovan, who did not attend UWM – and doesn't have a college degree – was an employee at Batzner Pest Control and was 36 at the time of the incident. In 2000, he told Milwaukee Magazine that he was looking through the hole because the officer in the next stall was "acting suspicious." Later, he told Milwaukee Magazine, "I was issued a ticket, much as you would be issued a ticket for speeding. I paid it. End of story."


"If you want to hear the interview, I have the tape. Feel free to come down to the Journal Sentinel at any time. I don't yell, shout or scream. Anyone who knows me realizes this," responded Bice. 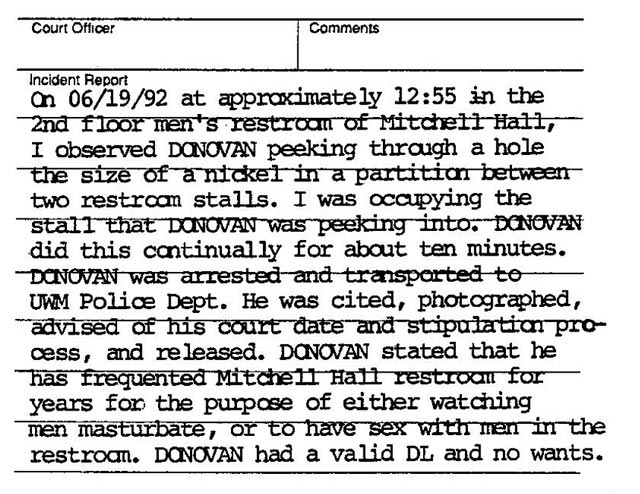 Yesterday, Bice published his column, saying Donovan has presented himself as being tough on crime despite having his own run-ins with the law. Case in point: the ticket.

It was on Feb. 13, a week and a half before Bice’s article was published, that Donovan’s Facebook post attacked Bice on his mayoral Facebook page, also claiming Bice was "disrespectful and, at times, vulgar" during the interview. This interview occurred a month before, when Donovan received the endorsement of the Milwaukee Police Association, according to the post.

In his Facebook post, Donovan wrote, "Now comes the mayoral election and my detractors are at it once again. I'm not surprised, but when Milwaukee is struggling with out of control crime, failing schools, joblessness, increasing poverty, a crumbling infrastructure and many more serious problems, I believe our residents are better served by us concentrating on the real issues rather than personal attacks and gossip."

Responding to the Facebook post, Bice agrees that the author got "some things right and some things wrong." Bice confirmed that he interviewed Donovan, for a second time, after the press conference when he received the Milwaukee Police Association endorsement.

"It is important to note once again that the interview occurred more than a month ago – the delay and timing of the Journal Sentinel's attack articles against Alderman Joe Davis and I just days before the election ought to be viewed as approaching criminal influence upon an election," said Donovan in his Facebook post.