Urban spelunking: A look back at the pre-fire Dover Street School

As the debate about the future of the currently idle Dover Street School building in Bay View continues, we take a look at what the building was intended to look like and how it changed.

There's no such thing as a quick visit to the MPS facilities and maintenance department's archive on the edge of Downtown. At least not for a schoolhouse geek like me.

Recently, I stopped in to see if I could glean some information about who created the gorgeous decoration at the shuttered Philipp Elementary and, as always, one thing led to another and I found myself over by the Ds in the alphabetized flat files that hold the drawings for all buildings still under the district's purview.

As the debate about the future of the currently idle Dover Street School building in Bay View continues, I decided to take a look at what the building was intended to look like and how it changed.

There has been some debate about whether or not Edward Townsend Mix or his partner Walter Holbrook drew the plans for Dover Street School, which was designated District 17 No. 1 until 1912.

Mix, one of the most respected – if not the most respected – architects in Milwaukee at the time, and Holbrook were partners from 1882 until 1889, so perhaps the argument is a moot one. Maybe the two – both of whom had drawn a number of public schools (Holbrook was responsible for two other Bay View schools: Mound Street and Trowbridge) – collaborated.

What was drawn was a lovely Queen Anne-style, three-story schoolhouse executed in cream city brick with rusticated stone details. An entry tower on the east end surely suggests Mix – as does the fact that his name alone is on the plans – especially when compared to his Second Ward School on 10th and Highland.

That school, attributed to Mix, was also built in 1889 and looked very similar to the plan for Dover, though a bit larger and reversed. It has a nearly identical tower. You can see a photo of that building, long since razed, here.

Like most neighborhood schools, District 17 – which had itself replaced a smaller schoolhouse on the site – was woefully inadequate in size by 1909, when an addition was put on the back. Part of that addition was the incredible basement kindergarten room (above), with its fan of south-facing windows offering scads of natural light. 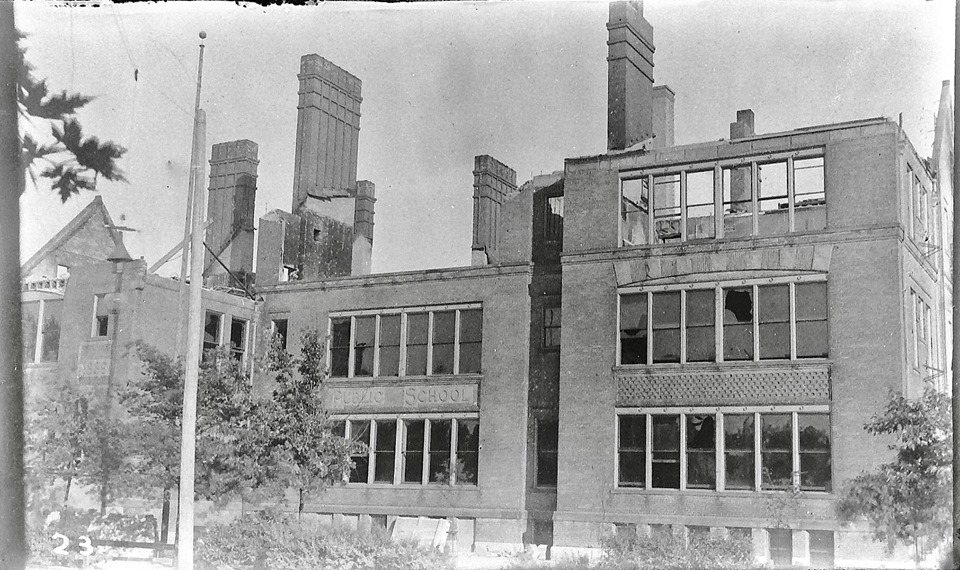 But the following June, fire tore through the building, causing extensive damage to the roof and attic floor. According to Ron Winkler's Bay View book in Arcadia's "Images of America" series, damage ran more than $23,000. That was roughly the amount the district was spending just a few years earlier to erect an entire three-story brick schoolhouse.

So, architects went back to the drawing board and made do. Rather than restore the school to Mix's plans they trimmed off the remaining gables and dormers and filled in destroyed portions of the third floor exterior to create the flat-roofed school that we see today.

On those drawings, specifications called for "each contractor (to) remove all material belonging to his work damaged by fire or water throughout the building and replace with material of same quality and shape as origonaly (sic) used or as directed. Study drawings an (sic) building carefully.

"The printed specifications for the additions built last year shall govern the quality of the work and material used for this reconstruction. Mason to build up brick work with hard burned common brick laid in strong cement mortar."

Steel trusses – by 1910 more common – replaced the web of carpentry that supported the old gabled roof.

Those repairs brought Dover Street School back to life and it spent the next century serving the children of Bay View, or at least the ones who were subject to taunts like  "Dover, Dover stinks all over; put in the can and roll them over" from their equals over at Fernwood and other neighborhood schools.