Don't be surprised if you see a rash of Rishi Tea tap handles cropping up around the city in the coming months. Milwaukee's local tea purveyor has released a new product, Rishi Craft Brew, which takes everything you know about tea and turns it ever-so-gently on end.

Don’t be surprised if you see a rash of Rishi Tea tap handles cropping up around the city in the coming months. Milwaukee’s local tea purveyor has released a new product, Rishi Craft Brew, which takes everything you know about tea and turns it ever-so-gently on end.

The new sparkling tea, which is hand-blended from organic tea and botanicals and contract-brewed to Rishi’s specifications by Milwaukee Brewing Company, is currently offered in two flavors: Sparkling Turmeric and Runner’s High. And a taste of either of the completely sugar-free brews might just make you consider kicking your soda habit to the curb.

The Sparkling Turmeric – currently available on tap at the newly minted Explorium Brewpub – was inspired by Southeast Asian anti-inflammatory remedies for headaches and hangovers. It's a caffeine-free blend, the flavor of which focuses on both the earthy elements of turmeric and saffron, along with distinctly refreshing high notes of citrus derived from ingredients like kaffir lime and lemongrass.

"One of the key functional ingredients in our turmeric ginger tea is gancao (licorice root)," says Rishi Marketing Director Jeffrey Champeau. "In Chinese herbology, they call them medicine triggers. And they effectively deliver the curcumins in the turmeric. To energize it, you need to combine it with specific ingredients.

However, when cooled, licorice root becomes a very prominent element, says Champeau, which lingers on the tongue and overtakes the other flavors. Therefore, the Sparkling Turmeric has been reformulated to include Sri Lankan mango and a number of additional herbs that balance the pungency of the turmeric root. 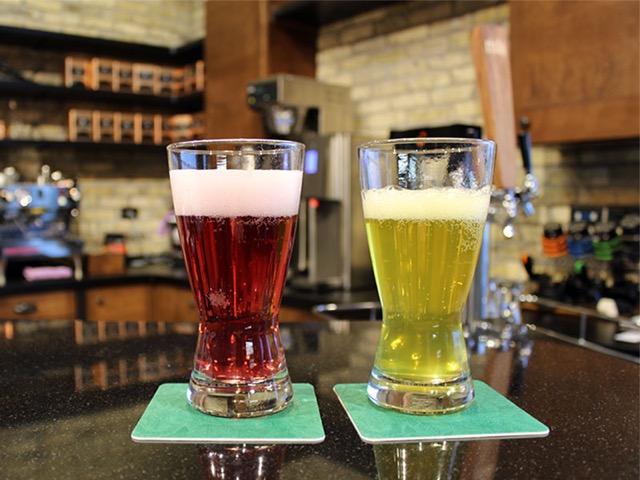 Meanwhile, Runner’s High is a refreshing, invigorating blend of fermented green tea and yerba mate with a sweetness derived from fruits and flowers, including schizandra berry, fermented black limon and hibiscus.

Inspired, in part, by the cold-brew coffee trend, Craft Brew is the product of more than a year of research and development in blending tea and botanicals in a way that has promoted very specific flavor profiles that stood up to carbonation.

"We have an appreciation for well-made food and beverage. And we took the time to really think critically about the methodology … because it’s more than a cold-brewed tea," notes Champeau. "We use both hot water and cold water extraction, depending on the blend, to bring out the flavors in the best possible way. It’s also about more than taking our tea and adding carbonation to it. Each ingredient has its own aromatic elements, and so we’re looking at the nuances in the herbs we’re using and blending."

And, at its essence, the carbonated tea represents the intersection between modern culinary technology and age-old herbal wisdom that’s appropriately refreshing and hydrating as a daytime beverage, but equally as compelling as a mixer or even a stand-in for an alcoholic beverage.

"There’s something about getting a beverage off of a tapper that gives it a bit of sophistication," says Champeau. "We’re really excited about the lifestyle aspect of it. It’s something you can experience during the daytime, but it’s also the sort of beverage that makes perfect sense to consume at night."

Champeau says there are about a dozen more recipes for Craft Brew on deck, some tea-based and others strictly focused on unique botanical combinations. And although the product is currently only available for sale in recyclable five-gallon Dolium kegs, which attach to tap systems just like kegs of beer, it could evolve into a bottled ready-to-drink product if the idea takes off. Some of that, he admits, depends on how well the product does in Milwaukee, which is currently functioning as a prime test market.

"Never has a Rishi product depended so much on Milwaukee," adds Central Region Account Manager Marino Baca. "It will be exciting to see it catch on."