The folks at Drink Wisconsinbly Pub are on the final stretch toward opening their brand new pub at 320 W. Highland Ave. in the Fiserv Forum entertainment block.

The folks at Drink Wisconsinbly Pub are on the final stretch toward opening the brand new pub at 320 W. Highland Ave. in the Fiserv Forum entertainment block. In fact, the pub is expected to open on Thursday, March 28.

The new bar, which occupies 3,500-square foot space adjacent to Punch Bowl Social, will feature three bars, a merchandise counter and seating for about 170 guests. 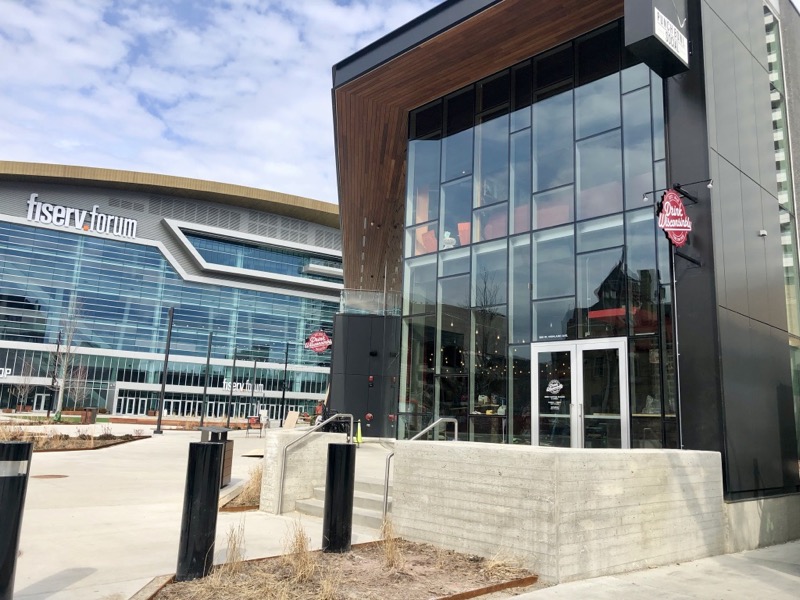 In terms of atmosphere, the new location will showcase a vibe similar to that which guests experienced at the much smaller Walker’s Point location at 135 E. National Ave., which closed at the end of last year.

"The goal was to bring the same neighborhood feel from the old pub to a larger location where we can serve more people with a distinctly Wisconsin experience," says Casanova of the space, which mixes a Wisconsin-centric Northwoods feel with modern-industrial accents and all the quirks you’d expect from the brand. 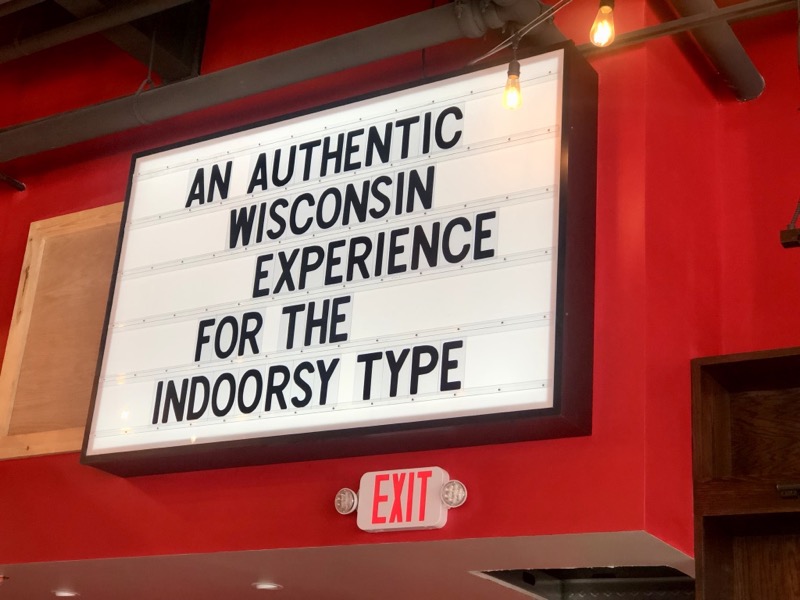 A quick look around the space reveals a large replica of the Welcome to Wisconsin sign found on the state’s border. It’s accompanied by a manual ticker that will record the (inevitably impressive) number of beers sold at the bar. 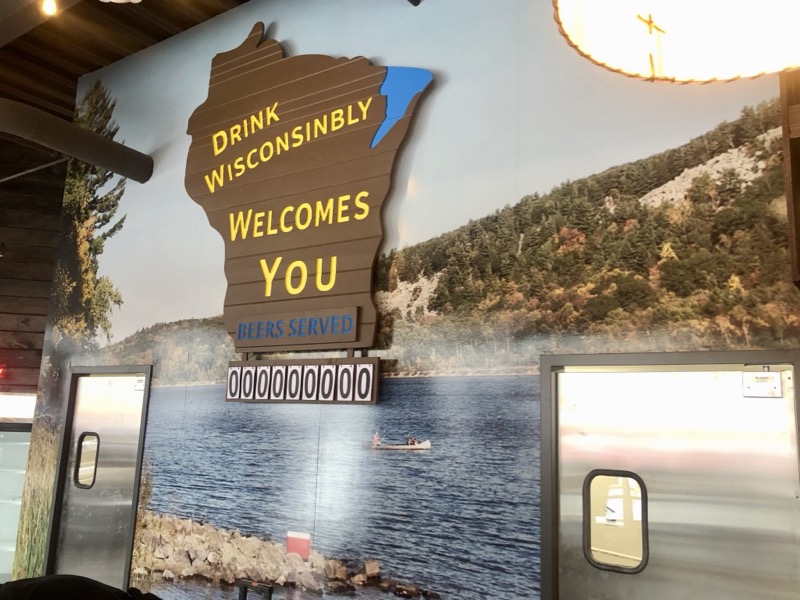 There are also familiar elements including rustic wood, quirky menus and kitschy lamps emblazoned with Wisconsin postcards and brewery logos. 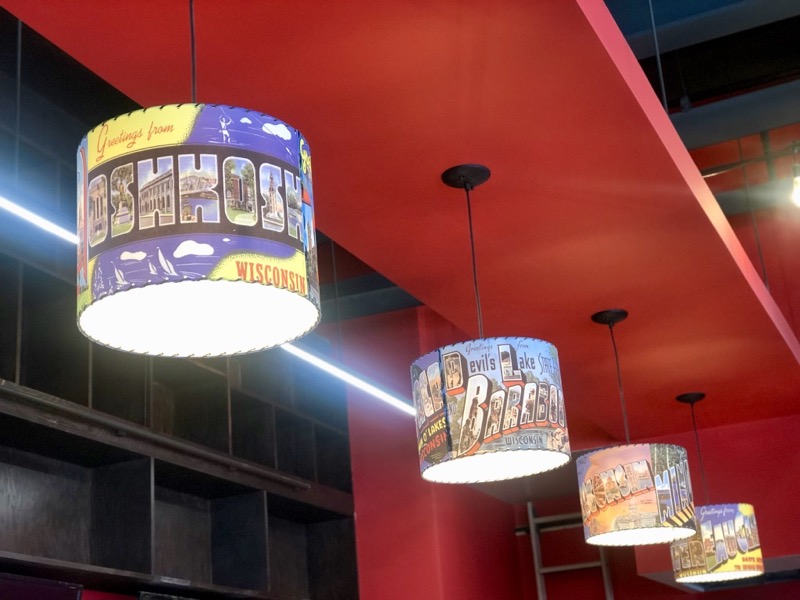 Another wall houses a display of over 1,300 beer cans from Wisconsin breweries that were donated by Drink Wisconsinbly fans in the months leading up to the pub’s opening (donors names are emblazoned on a nearby plaque). At first glance, you’re likely to see names like Old Milwaukee and Pabst along with more obscure names of breweries long since departed; look closely and you’ll also see the subtle image of the state of Wisconsin, outlined in red, among the cans. 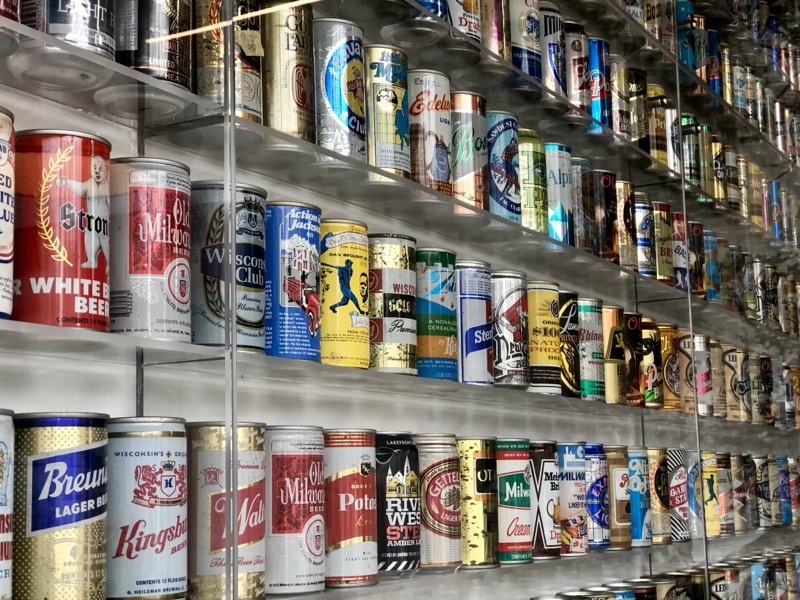 Adjacent to the beer wall and above the bar on the east, there’s also a replica of a photograph gleaned from the Wisconsin Historical Society depicting the practice of cliff jumping once popular in the Wisconsin Dells. 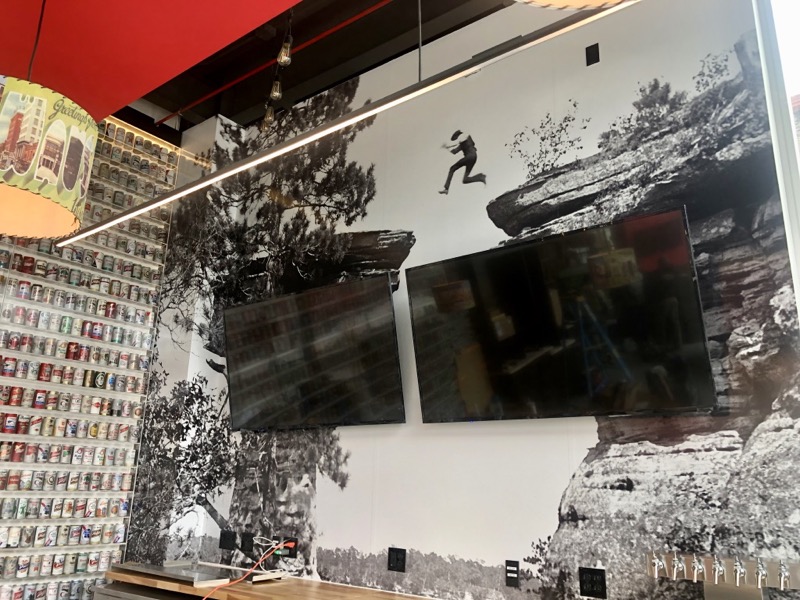 Guests will also be invited to peruse two full walls of cubbies featuring Drink Wisconsinbly merchandise, from hats and T-shirts to drinkware, signs and knicknacks, all of which will be available for purchase. Items in the shop can also be ordered onsite and shipped anywhere across the country.

Even the bathrooms are on-theme with their barnwood tile and wooden stalls, offering the look and feel of an upscale outhouse. The walls are hung with portraits of Wisconsin-born celebrities and quirky details include the urinal in the mens’ room, which is made from an old beer keg. 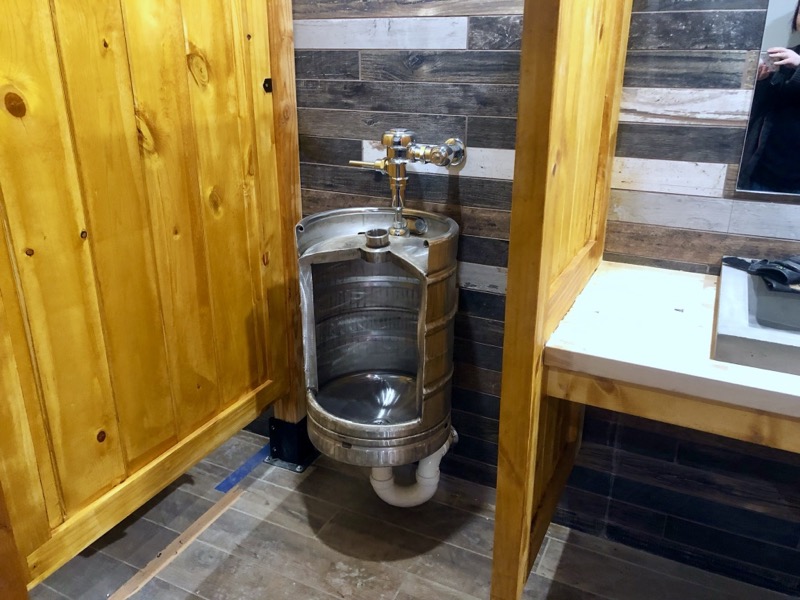 And come summertime (which is really right around the corner), guests will also be able to enjoy open air drinking, thanks to accordion-like glass doors which open onto the Fiserv Forum plaza, along with a yet-to-be-installed drink window where customers can order beverages to go. 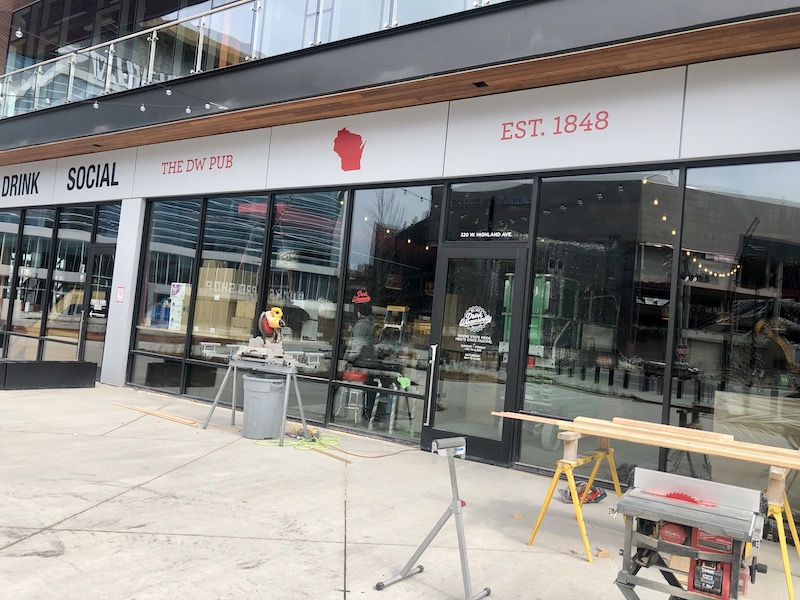 Drink Wisconsinbly boasts three bars, each of which will offer a selection of eight tap beers including selections from breweries including City Lights, Lakefront, Leinenkugel’s, Karben4 and Lake Louis, along with 20-plus Wisconsin brews available in bottles and cans.

There will also be not one, not two, but three old fashioned bubblers (one at each bar); each of which will dispense SoulBoxer old fashioneds. 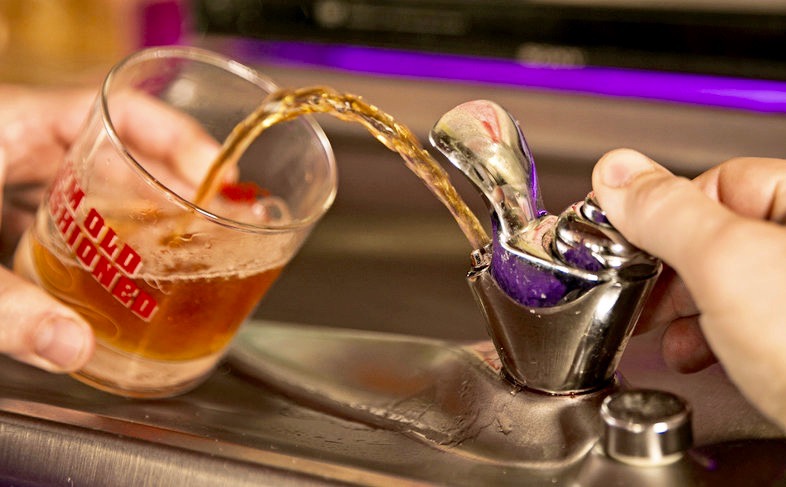 The full bar will also feature signature craft cocktails, all of which are made with 100 percent local products including spirits from Great Lakes Distillery and the brand new Drink Wisconsinbly Brandy (read more on that below).

General manager Cody Calderon says the pub does not have a kitchen. However, they will serve a variety of salty snacks including squeaky cheese curds, beef jerky and a rotating selection of happy hour features from 4 to 7 p.m. daily.

Created in 2013 by Richard Lorbach, Drink Wisconsinbly began with a T-shirt; but the brand has rapidly expanded, adding a variety of merchandise and branching out to include a hospitality brand in 2016. Most recently, the brand has also added a beverage company to the mix.

The new beverage arm will release its first product, Drink Wisconsinbly Brandy, in early April. The product will be served both at the pub and in retail stores across Wisconsin as soon as April 8.

"The goal has always been to expand the brand, notes John Casanova, president of Wisconsinbly Holdings LLC. "The goal of the Drink Wisconsinbly Beverage Company is to provide high quality beverages. And what better product to start with than brandy?"

Casanova isn’t wrong. After all, Wisconsin ranks at the top of all 50 states in terms of annual per capita consumption of the spirit, which is made from fermented grapes, most grown in California and Oregon. In the case of Drink Wisconsinbly Brandy, the product is distilled in California, then finished and bottled by Midwest Custom Bottling in Pewaukee.

Casanova says the brandy is just the first among in what he anticipates to be an expanding line of Drink Wisconsinbly beverages. 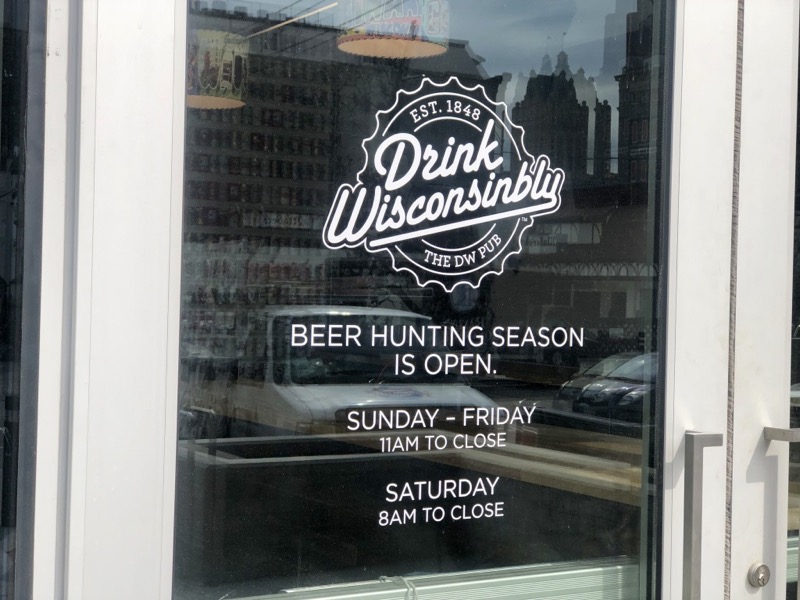 Hours for Drink Wisconsinbly Pub will be in flux for the first week; however, regular hours will be Sunday through Friday from 11 a.m. to close and Sunday from 8 a.m. to close.