From reimagined Taco Bell Crunchwraps and cinnamon twists to KFC Famous Bowl po'boys, your fast food wishes are about to come true at the new Oak + Oyster Drive Thru Dreams pop-up.

You’ve got two more precious days to get your fill of the Izakaya pop-up menu – including that stand-out ramen po’ boy – at Oak + Oyster, 724 N. Milwaukee St.

That’s because, starting Monday, May 6, the lower level bar at Third Coast Provisions will become host to a brand new Workshop pop-up concept: Drive Thru Dreams.

Inspired by the ubiquity of fast food in American culture and the post-drinking allure of the drive thru, the newest pop-up features a menu filled with nostalgia-filled mash-ups, fast-food-inspired comfort and junk food remakes, every one of which is a step up from the original. 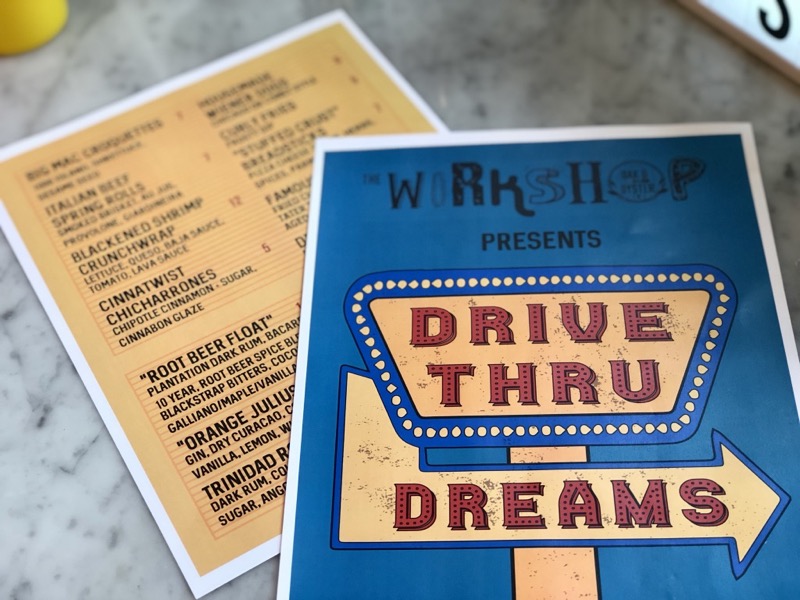 "When we started discussing ideas for The Workshop pop-ups, one of the original topics that came up in conversation was fast food," says Chef Andrew Miller. "We started by compiling a list of ideas, and as we worked through them over time, the goal was to create really fun dishes that tastes great after you’ve had a couple of drinks."

On the drinking end, Bar Manager Joe Lowery has you more than covered. In addition to a menu of wine and beer, he’s worked up a menu of cocktails that are just fun and – in many cases – irreverent as the dishes themselves.

"The izakaya pop-up was pretty serious and studied," Lowery says. "So we decided to go pretty light and fun. There are some elements here you wouldn’t otherwise find in a respectable bar program. But the goal was really to capitalize on creating drinks that fit in with the fast food theme."

Among those drinks is the Happy Hour Cocktail, a caffeine and sugar-loaded drink that conjures the spirit of an energy drink-based cocktail. It features tequila, Mountain Dew, banana liqueur and lemon ($6).

"Mountain Dew actually has a flavor profile that matches well with tequila … so does the Giffard banana liqueur, which really has some nice caramelized notes. Meanwhile, it all gets rounded out by the citrus."

It wouldn’t be a complete stretch to pair it up with an order of the infinitely snackable Cinnatwist Chicharrones, a fun mash-up combining the spirit behind Taco Bell’s Cinnamon Twists and the sweet cinnamon-forward flavor of Cinnabon. 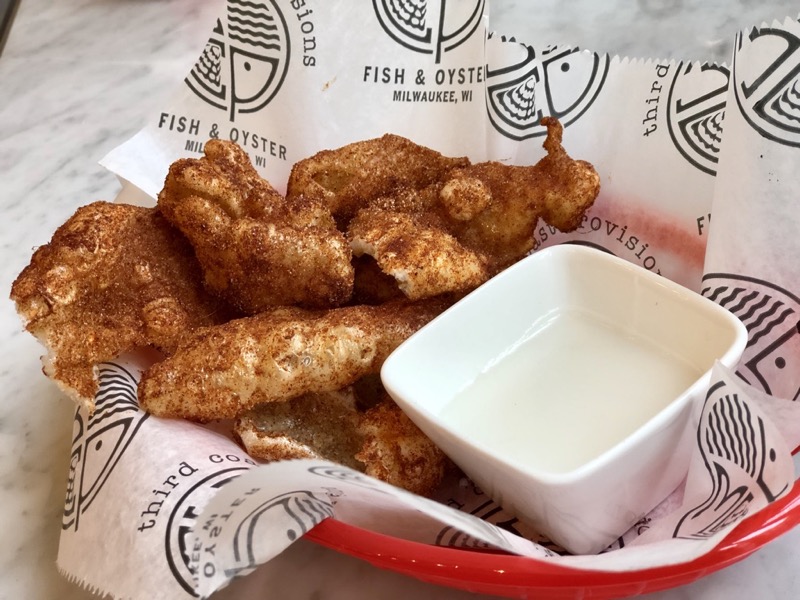 "At first, we thought we’d simply do cinnamon twists," recalls Miller. "… but those morphed into chicharrones. They still needed something, so we pulled in the sweet and spicy element with the Cinnabon glaze" ($5).

If sweet and spicy isn’t your jam, you can always fall back on Oak + Oyster’s take on a Pizza Hut classic. 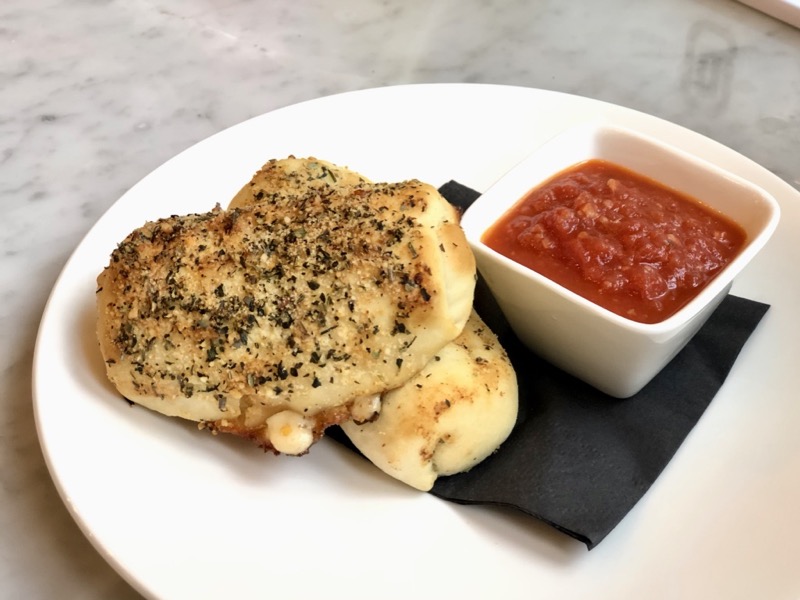 "Pizza Hut used to do these really good breadsticks with cheap parmesan and a ton of herbed seasoning," says Miller. "So we took that idea, put pizza flavored Clock Shadow cheese curds inside and doctored it up with herbs, spices and lots of Parmesan."

Among the must-try options are amazing copycat style creations like the Blackened Shrimp Crunchwrap, swiped directly from the Taco Bell arsenal. But the Oak + Oyster version benefits from a serious shrimp upgrade and recreated versions of queso, Baja and lava sauces (along with the freshness of lettuce and tomato), $12. 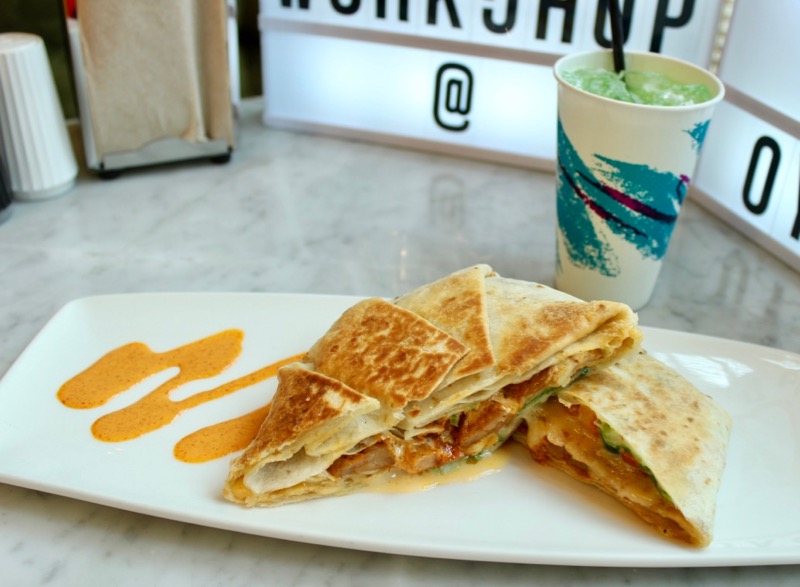 It’s a perfect pairing for the Baja Blasted, a cocktail that Lowery says is "like a '90s bartender's dream" featuring ingredients like Hpnotiq, Midori and Dry Curacao.

"The goal was to create a spiked version of Taco Bell’s Baja Blast," he says, noting that he made one of his first trips to Taco Bell since college for the sake of the drink’s R&D. "And this is close. It’s fruity and fun, but not quite a sweet as the original.

Miller and his partners Cameron Whyte and Sam Emery hail from Chicago, so all three have fond memories of meals at Portillo’s. Among their favorite menu options is the Italian beef sandwich, which has been reimagined using smoked brisket, provolone and giardiniera in these Italian Beef Spring Rolls ($7). 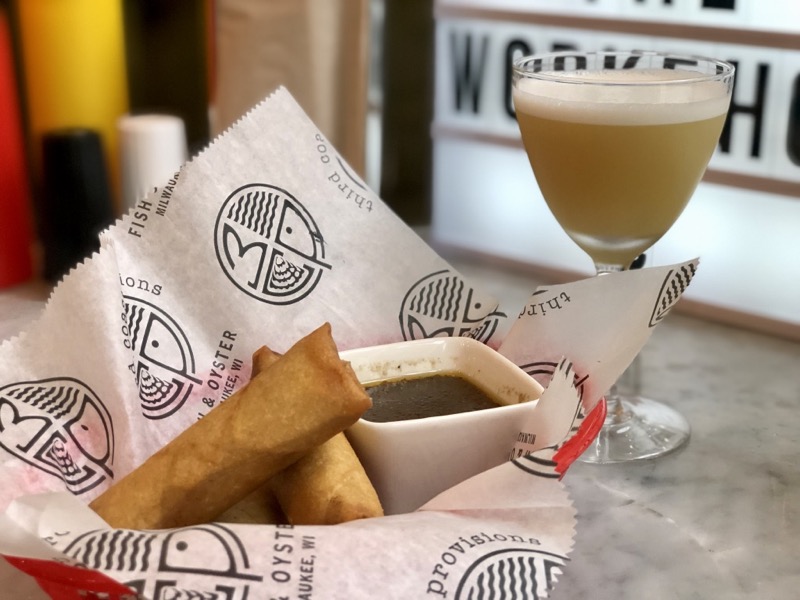 "We tried to recreate the effect you get when you order Italian beef dipped with giardiniera and provolone," he says. "We paddled the meat, cheese and giardiniera together so that it’s more of an emulsion. The meat sort of steams when you fry it in the eggroll wrapper, so you get this really nice texture that’s vaguely reminiscent of bread. That’s served with a fairly mild au jus for dipping.

You can pair that up with a completely mall-worthy spiked up version of the "Orange Julius," a drink that fully captures the creamsicle-esque character of the original with a combination of gin, dry curacao, cointreau, vanilla, lemon and whole egg ($12).

Come to think of it, the Orange Julius wouldn't be bad with the Famous Bowl Po'Boy, a take on the KFC bowl of a similar name. It's got all the components of the original – from Third Coast's delicious pickle-brined fried chicken thighs to housemade tater tots, sweet corn aioli, cheddar cheese and chicken gravy – all piled onto a housemade bun ($8). 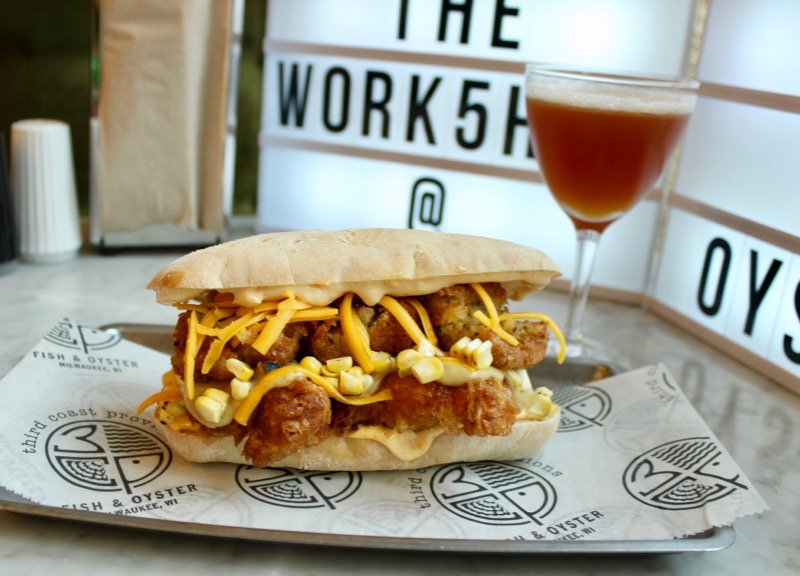 Enjoy it alongside a Trinidad Rock, a Third Coast favorite that fancies up the classic Cuba Libre (rum, lime and coke), $11.

No drive thru themed menu would be complete without a burger. But don’t expect the expected. Thanks to the twisted brain of Third Coast Chef de Cuisine Mike Meinzer, you’ll find the classic flavors of an iconic burger distilled into bite-sized form. These Big Mac Croquettes are topped with sesame seeds and served with 1000 Island dressing and shrettuce ($7).

And what’s better than a chocolate shake with fries? Not much. Enjoy those burger bites alongside house-seasoned curly fries served with a mini portion of "Frosty" dip ($5). 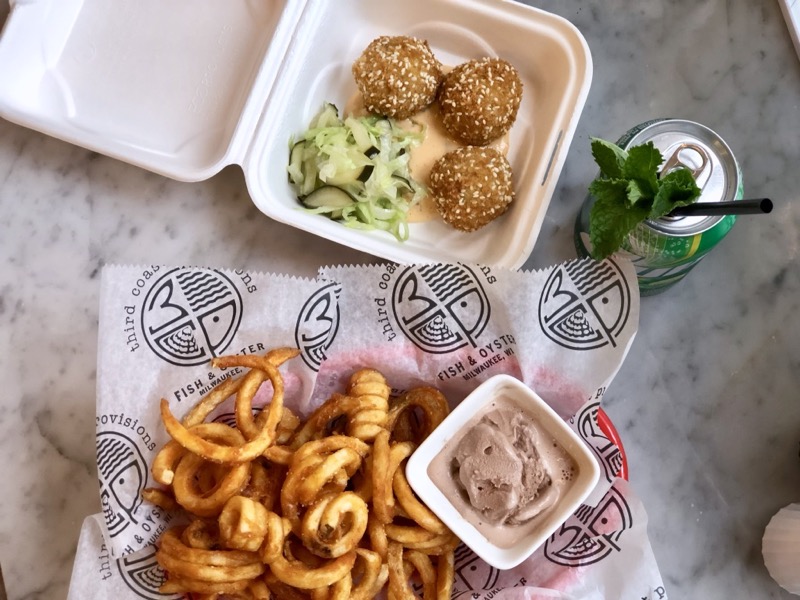 To quench your thirst, order up the "Lemon Lime," a cocktail inspired by Third Coast General Manager Matt Elfering, who has been described by his colleagues as, "a particular man who’s obsessed with lemon lime."

The cocktail itself evokes the idea of a Tom Collins, says Lowery, noting that it’s made with Old Tom Gin, "But it’s really just a light, refreshing drink that’s infinitely crushable." It’s served up right inside the can of 7-Up with a sprig of lime for good measure ($12).

Another Chicago nod comes in the form of housemade Wiener Dogs. You get one that’s been dragged straight through the garden. The other’s been given the Coney Island treatment (both for $6). 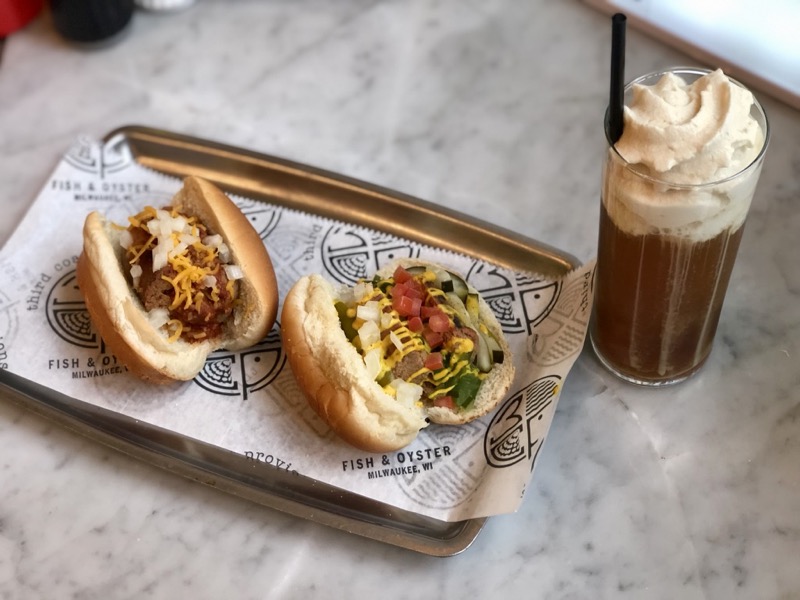 While you’re indulging your hot dog craving, you might as well pair it up with another classic flavor: root beer.

"It’s been one of my white whales ... to create a cocktail that tastes like root beer," says Lowery, noting that he went through ten or twelve recipes before perfecting his root beer syrup, which combines eight botanicals including sarsaparilla, fermented coconut sap, molasses, ginger and mint.

At the end of it all, you might want a little something sweet. And that’s the time to order a bit of dessert. This fancy little cake is really a Shamrock Shake in disguise; it starts with a vanilla sponge that’s topped off with mint mousse (made with fast food mint syrup), a vanilla cream center and a minty mirror glaze. And yes, there’s ice cream on the side for good measure ($6). 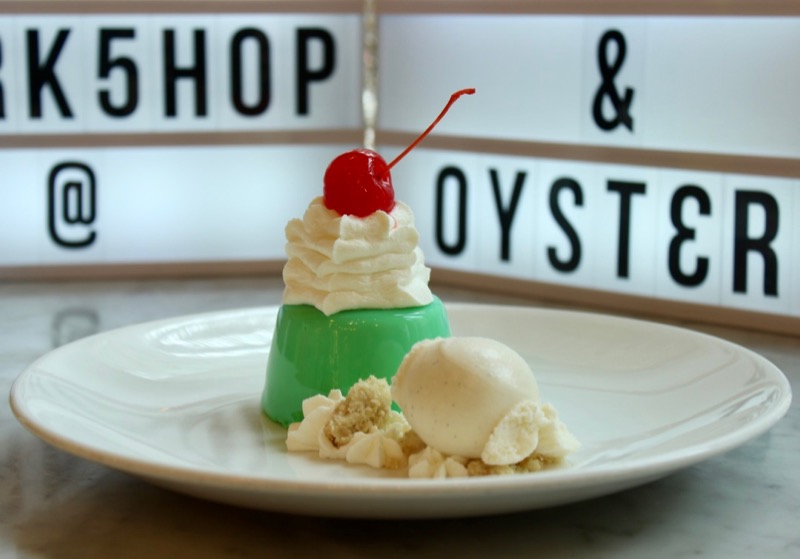 The Drive Thru Dreams pop-up takes place Monday through Saturday from 5 to 9 p.m. through June 29. Happy hour specials – including oysters (Just $1 each) – will also be available Monday through Friday from 4 to 6 p.m.

Drink me: A boozy Mad Hatter's tea party is coming to Milwaukee