When it comes to backline - that is, amps and drums - David Silbaugh is the big man at the Big Gig. For nearly two decades, Silbaugh has overseen this aspect of the festival, and it's a job that has grown each year.

When you're rocking out at Summerfest, do you even notice the amplifiers, the drums, the keyboards? Musicians don't need to answer, of course, but most others rarely give a thought to the gear. Most likely assume it arrived with the band.

At Summerfest, there are more than 700 bands on a dozen stages over the course of 11 days. So, whenever something like equipment change-overs can be simplified and streamlined, the Big Gig is on the case.

When it comes to backline – that is, musicians using amps and drums provided by the festival – David Silbaugh is the big man at the Big Gig. For nearly two decades, Silbaugh – in addition to being involved in booking talent from the Emerging Artists series to the headliner slots – has overseen this aspect of the festival, and it's a job that has grown each year.

So, why would rock stars want to use someone else's equipment?

"Well, that's a good question," says Silbaugh, himself a veteran drummer. "There are quite a few headline and support acts that are fly-in acts. This isn't on their scheduled tour routes, or maybe they haven't started their tour yet, or they just ended one. So if it's a fly-in date, we need to do backline."

In the past, Summerfest rented most of the requirements generally laid out in riders to bands' contracts. About 25 years ago, the festival began working with drum companies to bring in drums, which then were sold to a local music shop at a discount. In more recent years, amplifiers have been added. It's a scenario in which everyone wins.

"We have agreements with equipment manufacturers and a retailer that takes them," says Silbaugh. "So, (the instrument companies) get the exposure; they get people playing their gear, which gives them a good experience; and then a retailer gets a chance to get into a quantity of gear at a reduced price, because the gear's been used for 11 days. It's a win-win all the way around."

Nowadays, about a month before the festival opens, Silbaugh and his small crew are tucked away in a dressing room behind the American Family Insurance Amphitheater stage, unpacking drums, cymbals, stands and other gear and assembling drum sets. Summerfest now gets more than a dozen complete drum sets of all shapes, sizes and colors, as well as cymbals and amplifiers. 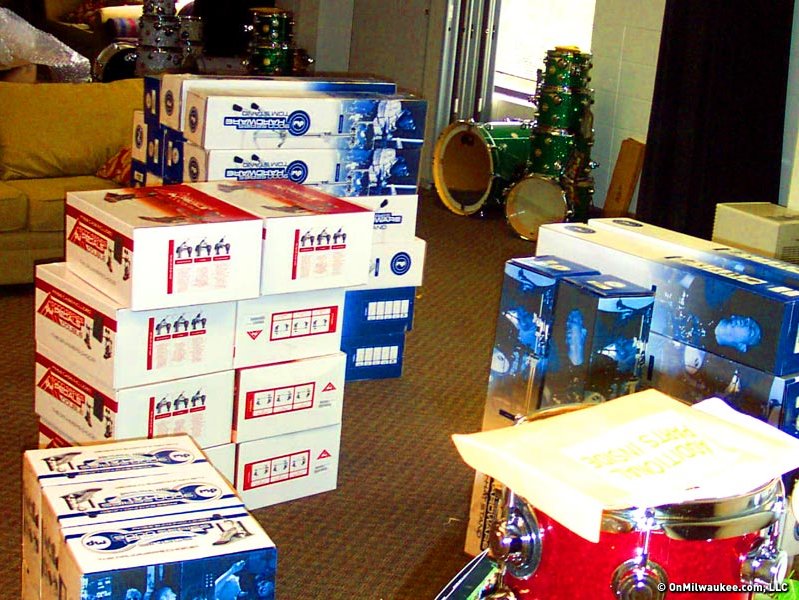 All this gear means that the festival experience has changed from Silbaugh and his crew. In the past, they just got a few kits and had to ferry them from stage to stage as needed, in a golf cart. Now, every stage pretty much has what it needs.

"Drums still move around because we have different configurations, different requirements for different headliners coming in," he says, noting that these days, there's enough gear on hand that many local bands also take advantage of the opportunity to leave some gear home.

Doing so helps the lower back health of drummers, but also suits stage managers who get to deal with less equipment taking up space backstage.

Although Silbaugh does a lot less time in the golf cart at Summerfest these days, he still keeps one handy, he says. Equipment fails, drum heads break, configurations need tinkering ...

"We have parts and replacement parts; we have an agreement with a drum head company, so we do head changes, of course. Some drummers are more abusive than others. Some (changes) are very last minute and some are, you know, they'll get in earlier in the day and they'll say they need this changed or that changed, or there's a particular drummer that is requesting a particular type of head. Some are more particular than others, obviously, and we try to accommodate as best we can."

Silbaugh says that band riders are usually very explicit about what's needed, and he rarely has trouble meeting the demands. Although he does remember at least one memorable occasion.

"(A drummer) who played with the Jacksons, had a long list ... he was here with Cameo and he wanted like 18 cymbal stands. It was just crazy. We were fortunate in that the time frame allowed us to take stuff from other kits around the grounds. They had the headline spot, so there were a number of kits that were not in use at that point, and so we pulled them from all the other kits and used a lot of adapters and whatnot. But that stuff had to be preset earlier in the day. If they're taking up 18 cymbal stands or cymbal mounts, then we have to somehow cover it (on other stages)."

Silbaugh got his start with Milwaukee World Festivals working at Winterfest 22 years ago. That led him to Summerfest, where his connections with drum and cymbal manufacturers turned out to be very useful.

"One of my assignments was to bring in a new drum sponsor, cymbal sponsor, all of that," he recalls. "In previous situations, a lot of drums got damaged, or disappeared – whatever. They were unhappy, and the companies involved were going away, and one of the first things I did was strike a deal with a case company because they weren't using any cases, you know. And there wasn't anyone assigned to overseeing the whole lot."

Intially, someone else was tasked with handling amplifiers, but that now falls under Silbaugh's duties, too. Now, he's the main backline guy at the gig. And you, the ticket buyer, have likely also benefited from Silbaugh's work, since it affects the Big Gig's bottom line.

"The relationships that have been developed," Silbaugh admits, "have certainly saved us money in rental costs over the years."